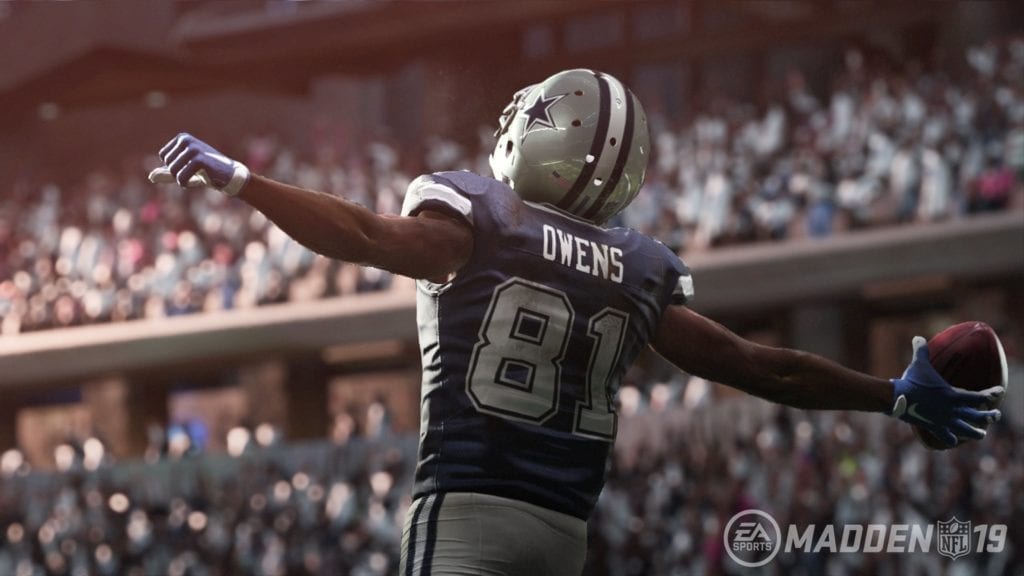 So you already decided that the Madden 19 Hall of Fame Edition was for you. The lure of being able to play the full game three days early, coupled with the endless amount of Madden Ultimate team packs you receive, made the decision easy. But now comes the dilemma of deciding which legend to build your Ultimate Team around. The choice isn’t easy, and could result in endless hours of internal debate.

Here is a look at the five Madden Ultimate Team legends, and what each player brings to the table.

As the cover athlete of the Madden 19 Hall of Fame edition, Terrell Owens is sure to be popular in the Madden Ultimate Team community. The 2018 Hall of Fame inductee recorded 1,078 receptions for 15,934 yards and 158 touchdowns throughout his improbable 15-year career. His speed, route running and ability to create separation made him one of the best wide receivers to ever play the game. Every time Owens was on the field a big play was soon to follow.

Wide receiver isn’t necessarily a premium position in MUT because it is one of the easiest to fill. Elite receivers can be found in everyday packs, and some of the lesser-known commodities have superstar potential based on speed and other ratings. However, landing an Owens MUT card has been impossible over the last several years as none have been in rotation. Selecting Owens as your MUT Legend will give you a significant advantage offensively, and unless your opponent has a true shutdown cornerback, Owens should have his way with imposing defensive backs.

Get your popcorn ready.

In time, most MUT teams begin to take shape and slowly become offensive juggernauts. But what ultimately separates a good team from a great one is defense. Users focus heavily on the skill positions, and rightfully so. But it’s how you matchup defensively that can give you the advantage against your opponents. Enter Brian Urlacher, the Hall of Fame linebacker who played 13 seasons exclusively with the Chicago Bears. During his time in the Windy City, Urlacher recorded 1,040 tackles, 41.5 sacks, and 11 forced fumbles. Urlacher revolutionized the middle linebacker position.

Urlacher will go down as one of the best linebackers of all-time because of his ability to do it all. Run stride for stride with a running back 40 yards downfield? Check. Attack the line of scrimmage, stopping the ball carrier in the backfield? Absolutely. If you’re like me, middle linebacker is my position of choice on defense, so having a player that has the speed to do it all is a necessity. If you want to give your defense an advantage from day one, and fill a critical area of need on your MUT squad, Brian Urlacher is the legend for you. 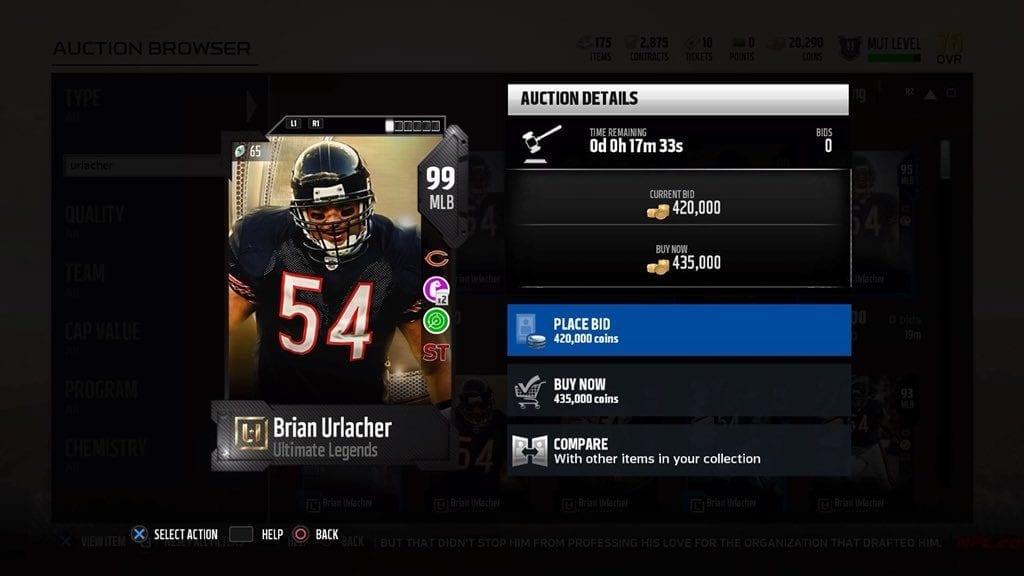 Quarterback is arguably the most important position on a football team, and the same holds true in MUT. Finding the commander of your team can be tedious, and very rarely do you find these elite players in everyday packs. Users can spend endless currency trying to find the right fit at quarterback. So when you have an opportunity to get a Hall of Fame talent, you don’t pass it up.

Dan Marino, the man given the nickname “The Right Arm of God” by many in the football community, remains one of the best to ever play the position. Marino finished his 17-year Hall of Fame career with 4,967 completions, 61,361 yards and 420 touchdowns. His release was one of the quickest in the history of the NFL. The same holds true with his arm strength and pinpoint accuracy. Marino wasn’t the most mobile quarterback, and we all know speed kills when going head to head with users online. But once you look beyond his lack of speed, very few quarterbacks can do what Marino can. He would be the perfect field general for any MUT team. 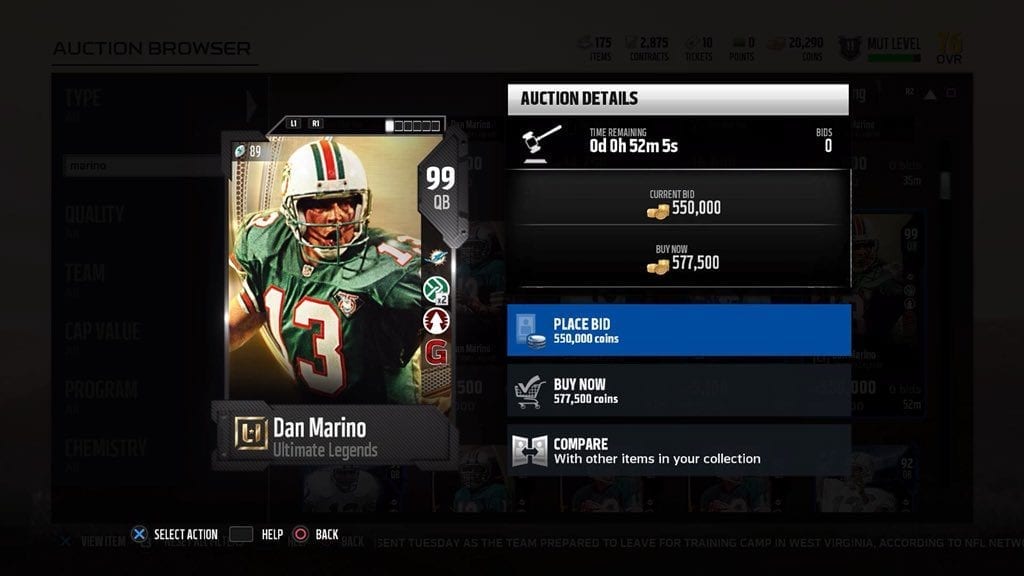 We already discussed how popular the Terrell Owens card should be when Madden 19 drops in August. Which means owners will be desperately trying to find a way to counter his explosiveness, and who better than Hall of Fame defensive back Rod Woodson? During his 17-year career, Woodson amassed 1,049 tackles, 71 interceptions and 12 touchdowns.  He was a player that contributed early in his career as a return man, but later found his role as a shutdown cornerback.

Elite defensive backs are some of the most sought after players in the MUT because of how powerful opposing offenses can become. Having a true shutdown cornerback that can completely erase an opponent’s top wide receiver is key. Finding a player that can do that, while being a game changer in the return game, is legendary. If a playmaker in the secondary is what you yearn for, Rod Woodson is the MUT legendary card for you. 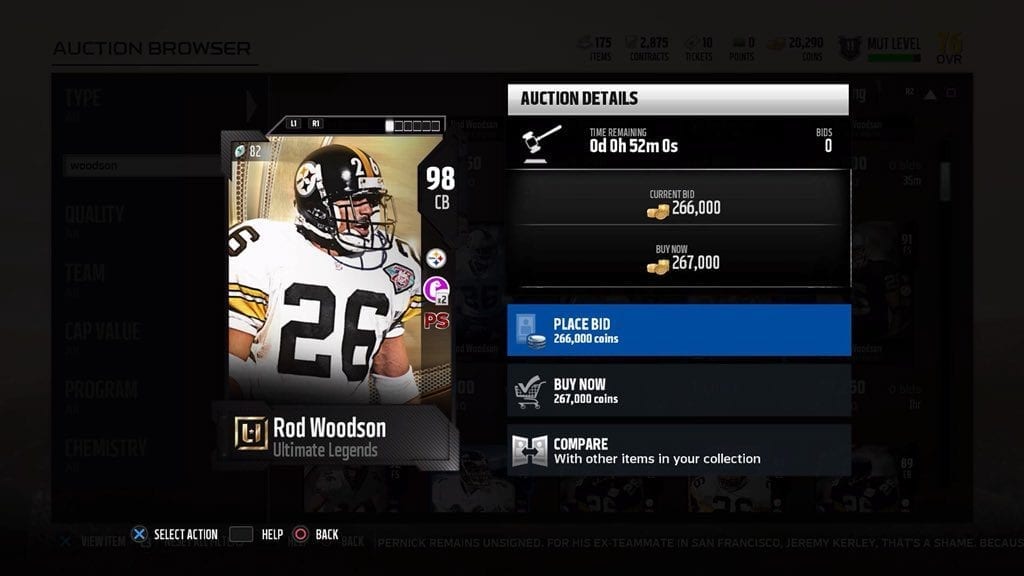 If you’re like me, the running back position is one of the most important when building a MUT squad. Having a running back with top-notch speed, elusiveness and adequate ratings as a pass catcher is crucial. Although running backs seem to be easier to acquire than other positions, having an opportunity to get a legendary running back straight out of the gate is hard to turn down. That is where Hall of Fame running back Terrell Davis comes into play.

The Denver Broncos’ legend rushed for 7,607 yards and 60 touchdowns in seven seasons. That feat is incredible, considering he suffered a significant injury in 1998 and again in 1999. Selecting Davis as your Hall of Fame legend solidifies an important position on offense, and gives you a true difference maker in the run game as well as the pass. Davis is sure to be tough to tackle in the open field, and has the ability to run defenders over, in addition to making them miss in the open field. Davis is a complete back, and the perfect card for you when choosing your ultimate team legend. 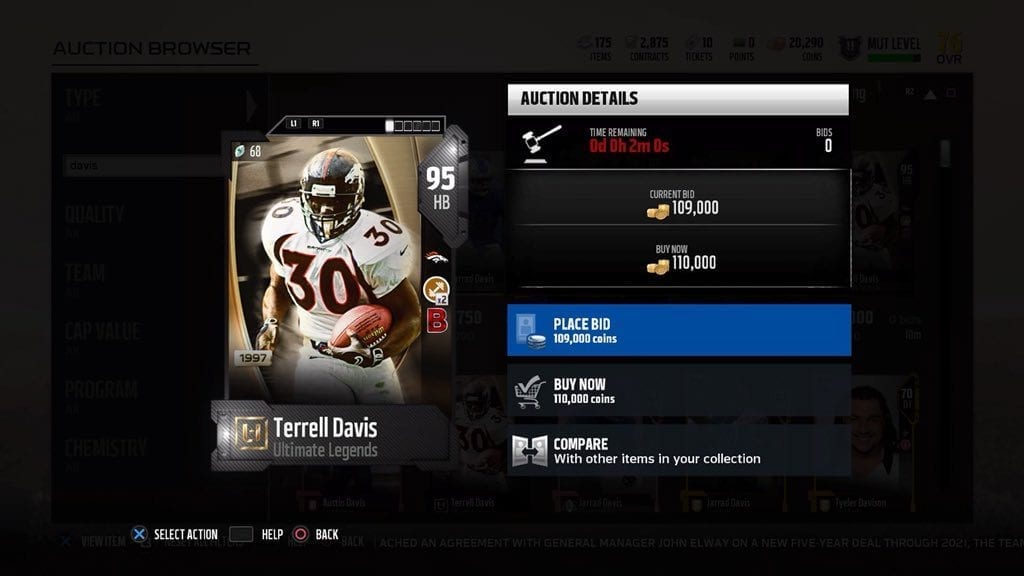 If you’re a hardcore Madden Ultimate Team player, you most likely already have the Hall of Fame edition pre-ordered. And no matter which player you ultimately choose, each player has the ability to be a game changer and give you the leg up on your competition.

Which Hall of Fame Legend do you plan on building your Madden Ultimate Team around?