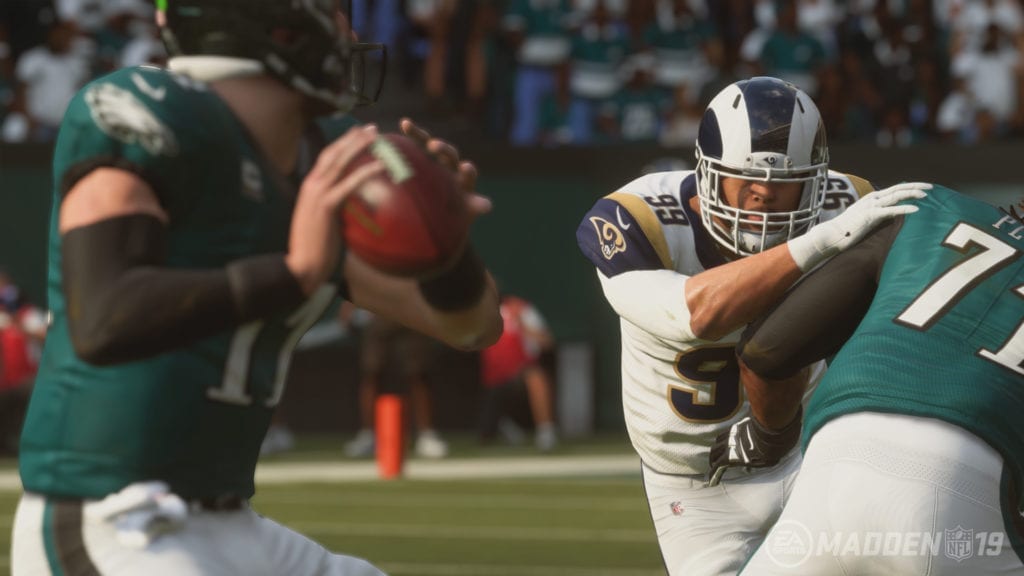 There is no shortage of love for the exceptional NFL Street series here at OS. With the NFL season coming to a close and the compendium of Super Bowl simulation articles incoming, we got to thinking. Which of 2018’s NFL teams is best-suited to dominate the Wild World of NFL Street?

What better way to rekindle the joy of a classic sports game than to plop a modern team into whatever team editing avenues the game has to offer? Thankfully, NFL Street is very well equipped with a remarkably deep team editor and NFL Challenge mode, so dreams can become reality.

How do we qualify an optimal NFL Street squad?

Many will fondly remember the trio of dominating mobile quarterbacks (Michael Vick, Donovan McNabb, and Daunte Culpepper) that made even Peyton Manning’s maxed-out passing arm and turtle-like speed superfluous. A mobile QB is a must, even if it means losing out on the most accurate arms. That eliminates the likes of Tom Brady and the Patriots, Philip Rivers and the Chargers, Drew Brees and the Saints, and Eli Manning and the Giants. Plus, Brady and Brees (as a Charger!) were in the original game anyway, so where’s the fun in that?

Running backs, to be frank, could go either way. Most backs in the game fit into one of two categories: quick and agile, or slower but harder to take down. Sure, Tiki Barber and Mike Alstott feel noticeably different, but Tiki will break enough tackles and Mike will move fast enough to evade pursuers. This is not as pertinent as other positions. The back need not be a top star, but a slightly better back means a slightly better seven.

The frantic blitzing and our cemented need for a mobile quarterback intensifies the importance of both the quick and deep passing game. Additionally, these guys will be covering other talented wide receivers on defense. Sure, there are elite cornerbacks, but an agile receiver with exceptional hands goes a long way on both sides of the ball.

A linebacker that can cover the short pass well is exceptionally helpful. Nothing’s worse than exceptional deep pass coverage that leads to Kurt Warner dumping the ball off to Marshall Faulk, who racks up style points the entire distance of the field and makes you feel like a shell of a human. Stopping the run is important, but these LBs will need to have some speed as well.

Disruptive defensive linemen can dictate the entire tone of a matchup, terrifyingly chunking his way over to a quarterback in the pocket or dismantling a run out of thin air. The quicker defensive linemen, such as Jason Taylor and Jevon Kearse, are an essential element of the ideal NFL Street roster. We’ll need elite talent.

Throughout the years, it was very easy to replace a DB with an elite WR and best attempt to cover their route, but experienced players will happily trade an excellent pair of hands with no tackling or coverage stats for a decent pair of hands with exceptional tackling and coverage. They need to be fast and they need to be ballhawks, and every team should have at least one.

Ah, yes, the offensive lineman. Does the game’s algorithm allow so that even quarterbacks and running backs can guard as effectively as a lower-end OL? Yes, but not always. Does the inclusion of an elite lineman give quarterbacks a noticeably larger amount of time in the pocket? Yes, but not always. Sometimes it works and sometimes you get burned. It is arguably the hottest debate of the NFL Street universe, but it can go either way. A crutch for some and a burden for others, the offensive lineman is optional in favor of supplemental defense.

So which 2018 teams are best fit for the NFL Street universe?

The Cowboys’ Pro Bowl roster alone looks like a leaked starting lineup for an NFL Street reboot. All seven roster spots could be filled with exceptional talent. However, they fall short of the Chiefs and Texans in some individual talent. Defensive lineman is not as strong as Watt or Donald, but the 2018 Cowboys make up for it in other areas to finish one of the most well-rounded teams.

Aaron Donald and the great hands of Todd Gurley make the Rams an interesting selection. Robert Woods and Brandin Cooks may not be Hill/Brown/Hopkins elite, but they give Jared Goff dual weapons all while keeping a short pass to Gurley as an option. Mixing in Aqib Talib, Ndamukong Suh, and Marcus Peters gives the Rams good defensive depth even if Goff is not as mobile as his quarterback counterparts. You can already see Woods and Cooks running those frustrating reverses and trick plays to rack up yards that you thought were unattainable on fourth-and-long.

Remember when Patrick Mahomes scrambled for what felt like an hour and a half before hitting Chris Conley in the back of the end zone? And how he literally ran backwards as if he was your younger brother panicking and dropping back 30-something yards to evade pass rushers in NFL Street? That’s the kind of offense we’re looking for here. Even though speedy receivers like Tyreek Hill are of vital importance, Travis Kelce could be fascinating playing as a hard-hitting DB or pass-savvy LB on the other side of the ball. Elite talent at just about every meaningful offensive position make the Chiefs the team best equipped to challenge the 2018 Texans for the top spot, but they fall a hair short in the defensive category.

What gives the Texans the edge is the roster requirement. Needing only one or two players per position allows for us to celebrate the franchise’s stars without being hindered by its depth shortcomings. You can almost see DeAndre making that signature one-handed catch in the back of the end zone in the Warehouse arena or J.J. landing that one sack animation that sends the QB back twenty-something yards. Jadeveon Clowney, Tyrann Mathieu, and Bernardrick McKinney round out an elite defensive unit that can easily allow us to do that whole “forgo an offensive lineman” thing here.

Well, there you have it. Did we miss anyone? Berate our rationales and make your case for another squad in the comments. Hopefully the next time we chat, a reboot of the franchise will be announced. There’s always hope!