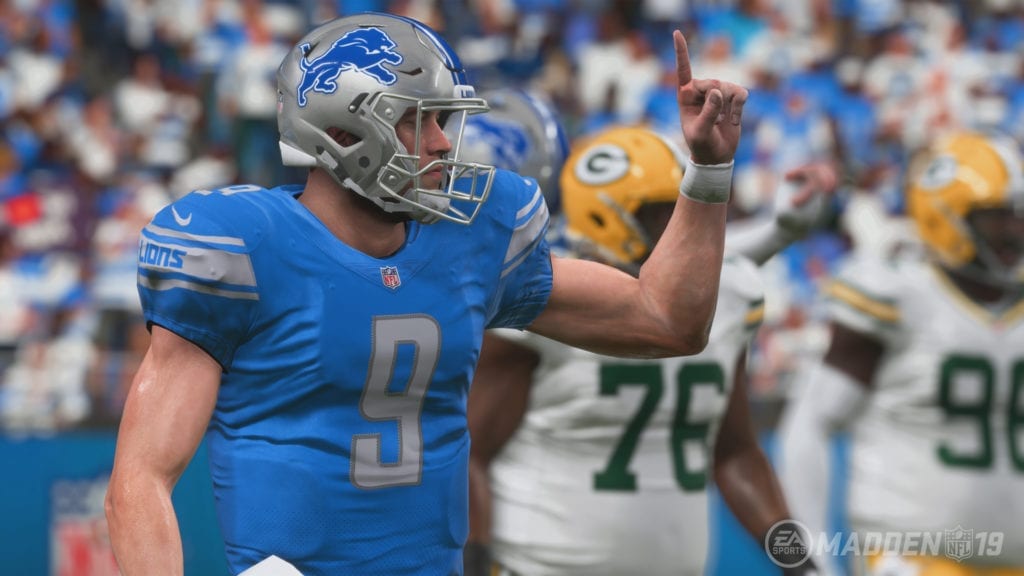 As we all settle into a new season of Madden NFL, we’re all starting to come into our own in terms of new strategies we’re using versus previous years. So today, we asked the OS staff to detail some of the things they’re noticing and doing this year that is different from prior years.

I’ve always been a run-first guy in Madden, but never has it felt so rewarding. Waiting patiently for holes to open, only to explode through the line on your way for a 5-6-yard gain, never felt so rewarding. In addition to the new offensive line play, real player motion (RPM) allows for more dynamic cuts, stiff arms and spins like never before. The run game is definitely more difficult than previous years, but continuing to work at it will create long-term success.

Patience is the key to success in the passing game. I find myself going through my reads quicker and trying to make a throw before the window closes. I tend to user catch more than ever before, especially when trying to make catches in traffic. At least once every two or three drives I try to take a chance deep, using the highlight catch to make a play on the football. You would be surprised how successful this can be. In addition, the tight end in the middle of the field has been money so use all of your resources in the passing game. Lastly, the offensive line is a work of art, and I find myself in awe of the pocket forming around me.

Defensively, I like to use the middle linebacker so I rely heavily on myself in the run game. Offensive line play is much improved, but that doesn’t stop me from shooting the gaps on the way to the ball carrier. Unfortunately, I lack patience and this kills me in the passing game. Oftentimes I am a second late in coverage, resulting in a big gain. My advice? Let the computer assist you when covering HBs and TEs out of the backfield. This will make a big difference. Let’s not forget the hit stick, which has paid huge dividends early on in Madden 19.

As with the improved O-line comes improved defensive line play. The pass rush is much improved in Madden 19 and gives things a more realistic feel. In obvious passing downs, I like to user the DE at times, making things more difficult for my opposition.

Lastly, the secondary plays much more fluid and is better overall in coverage. I feel like I can make better plays on the football when the ball is in the air. Gone are the wonky tipped passes that end up in a receiver’s waiting arms. Overall, I am thoroughly enjoying Madden 19 compared to previous installments.

I haven’t had as much time as I’d like with Madden, but when I have played I’ve found myself applying my understanding of football and knowing how to read a defense when on offense to have more success this year. When running the ball, patience is king as already mentioned. I’ve always tried to wait for a hole to open up in previous Madden games, but this year I really find myself sticking behind my blockers and using the holes they open up to move the ball on the ground. The addition of the ability to guide yourself off of your block this year by holding up on the right stick is huge. I’ve turned a few plays that have looked to be a loss of yards or a one-yard gain into five and six yards earned just off guiding myself off the block.

In the passing game, I’m starting to quickly learn that patience is also key as well. The secondary and even linebackers are much smarter this year and will jump your routes on your throws. I’ve found myself using the LT/L2 feature a lot more on my short and some intermediate passes to keep the ball away from lurking defenders, hitting my receivers low and away. You’re going to have your open passes and routes, but you still need to be smart with your ball placement when making a pass or the defense is going to punish you.

On defense I’ve had a good bit of success causing fumbles by using the hit stick by flicking up on the right stick. The hits this year in Madden are vicious, especially when you land a clean hit stick. Using the strip ball button (RB1/R1) is also key when making a tackle and trying to cause a turnover.

RPM has definitely changed the way that Madden is played this year, and makes you actually play football and make smart decisions. (Disclaimer: I play on All-Madden, so this might not apply to everybody depending on difficulty played.)

Because defenders play balls better than they have in the past, one of the biggest adjustments is having to learn how to read defenses and coverages. In the past, you could rely a lot more on defenders being consistently inept at covering certain routes (corners, for instance) to help you move down the field, but now you actually have to analyze what a defense is doing, look for the holes in coverage or open man, and then get them the ball with the proper type of throw.

Staying on the offensive side of the ball, running requires a little bit more patience than it has in the past. With the new RPM physics in effect, you can’t just spam the sprint button anymore and expect to be successful. It’s now become more about reading your blocks, hitting the holes with a burst and using well-timed jukes to pick up those important extra yards in the open field. In short, a little more like real football.

Like everyone has said, one of the biggest adjustments is developing a Le’Veon Bell level of patience behind the line. Usually there will be one major running lane to get through for the running back. RPM has greatly changed how running works but it’s not just limited there. The biggest adjustment I’ve had to make is on defense. No longer is my middle linebacker able to cover the entire middle third of the field. Now I have to read and react to the WR routes and try to keep up.

Also true is I’ve started to make immediate moves after catching a pass since the WR has to plant before turning up the field. This helps to shake off defenders near my receiver and allows me to pick up crucial yards, particularly on crossing routes.

This is also the first year that I’ve felt compelled to manually adjust my audibles for each formation so that once I have an idea of what the defense is running, I have options for different plays to fit the situation. Madden 19 seems to be a more cerebral game than in the past and is more fun as a result.