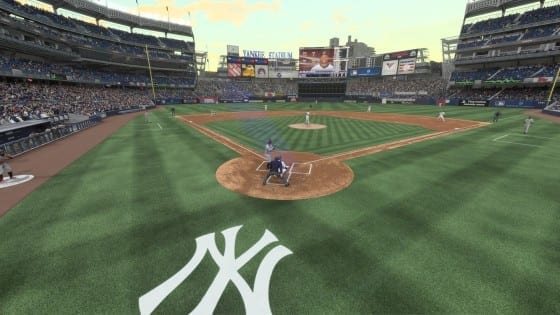 One of the greatest joys in sports video gaming is reinvigorating a beleaguered franchise and turning it into a digital powerhouse. Despite zero on-field action, the offseason is a favorite time of the year for many. The ambiguity of the future, the cause-and-effect of trades and signings, and the vague hope that your team will make the moves that elevate them into champions — is there anything better?

While few would actually ever declare the New York Yankees as a “beleaguered” franchise, 2016 was a form of the New York Yankees that has been decidedly absent for a long time: losers and sellers. Driven by a front office fans that demand immediate results, the Yankees found themselves in unfamiliar territory in 2016. Gratuitous spending, selling high on displaced veterans and promoting red-hot prospects ended a championship drought in Chicago. Let’s take a similar approach to the Yankees’ 2016-2017 offseason in MLB 16: The Show.

I’ve downloaded a fresh set of this season’s OSFM Rosters and set up a franchise with CPU trades off to sim straight to the offseason. If you’re curious, the Yankees finished 76-86, good enough for last in the AL East. The Blue Jays would go on to defeat the 113-win Chicago Cubs in seven games in the World Series. Brian McCann won a Gold Glove(!) and Dellin Betances won the Delivery Man of the Year award. Alex Rodriguez was the only Yankee to retire. Sorry, Mark Teixeira your digital counterpart does not share in your real-life exhaustion, and a reunion with the veteran-frenzied Atlanta Braves looks to be likely.

The Yankees’ seemingly endless pocketbooks have drawn the ire of rival fans for decades, and a number of expensive players are coming off of the books this winter. This is very exciting. They also boast what many consider to be the best farm system in the minor leagues amid a shortage of elite free-agent starters. These are equally as exciting.

Let’s assume Jacoby Ellsbury, Gary Sanchez, Didi Gregorius, Starlin Castro, Aaron Judge and Tyler Austin aren’t going anywhere. While we’re at it, let’s give Brett Gardner the benefit of the doubt and throw him in with them. The pitching staff is a bit more muddled, as question marks abound after Masahiro Tanaka, Michael Pineda, Luis Severino, C.C. Sabathia, Tyler Clippard and Dellin Betances.

By your humble author’s watch, the New York Yankees could use the following:

That seems reasonable enough. Plus, barring a red-hot spring that exceeds any and all expectations, all of the Yankees’ newly acquired prospects are comfortable assumptions to not be called up to the big-league roster at least until mid-2017. Clint Frazier would beg to differ, but his inclusion on the 2017 Yankees Opening Day roster largely depends on his Spring Training. Frazier pairs excellent defense with 20/20 potential and has dramatically improved his strikeout rate, but we are about to spend some serious Steinbrenner money. Frazier should have his day by the Super Two cutoff.

RP – Aroldis Chapman
How scary does the Betances/Miller/Chapman three-headed monster look now? It is terrifying to think the Yankees had the lockdown closers of both World Series combatants, and an Aroldis Chapman reunion makes perfect sense.

OF – Jose Bautista
Let’s face it. Historically, the Yankees have been very veteran-friendly. They have the money and they have the need. Very few teams will meet Bautista’s asking price, and under these digital circumstances, the Yankees are one of them.

SP – Rich Hill
And, if we are to consider the Yankees’ history for moves, we may as well observe it from a pitching perspective as well. Would the real-life Yankees sign him? Possibly. Will these digital Yankees on a win-at-all-costs spending spree sign him? Most certainly.

RP – Javier Lopez
Even with Tommy Layne, this feels like a move the Yankees would make. Yes, he is 39, and yes, his performance declined in 2016. However, he was very cheap and he has the experience. At any rate, one can never run out of uses for lefty specialists.

1B – Mark Trumbo
This could be trouble. I know, beloved reader, I too echoed your inner dialogue of denying that the Yankees needed another strikeout-prone power-hitting DH/1B after Bautista and Morales. But as Greg Bird rehabs a torn labrum, the 1-2-3 of Trumbo, Bautista and Morales could theoretically produce Steroid Era home-run numbers.

C – Carlos Ruiz
Brian McCann’s inevitable and impending trade (spoiler alert!) will create a bit of a void for the Yanks behind the dish. Except for, you know, Gary Sanchez. Ruiz should be a serviceable backup that can join the Yankees for this blissful high-expectations ride and impart worldly wisdom unto Sanchez and Austin Romine. Hey, he’s not on the digital Mariners.

Brian McCann to the Houston Astros for prospects.
Even as a die-hard Astros fan, exploiting the exceptional fit would benefit the Yankees. The Astros have tantalizing pieces at every level, and the surplus prospects would be particularly beneficial for the following move. Maybe Jon Singleton could utilize the friendly confines of Yankee Stadium.

Prospects to the Tampa Bay Rays for Evan Longoria and Chris Archer.
Yup, here’s the big one. Remember the aforementioned not-so-great free-agent market for starters? If the real life Tampa Bay Rays could find it in their hearts, this trade is a win-win both digitally and in real life. The Rays receive elite, almost-MLB-ready prospects to add to their young core and shred their biggest payroll inhibitors. Meanwhile, the Yankees add a pitcher they so desperately need in the hyper-competitive AL East and give Longoria a new home ballpark, supporting cast and opportunity to return to his superstar form. The Yankees have the prospects to get it done, and the digital Yankees have a propensity to go all-in when it comes to 2017 acquisitions.

Let’s take a look at our rebuilt Yankees:

Oh, baby. A fearsome lineup and a well rounded rotation. Clint Frazier potentially still with the club. Ready to compete for the foreseeable future. I don’t even like the Yankees and I’m excited. What do you think, loyal readers?