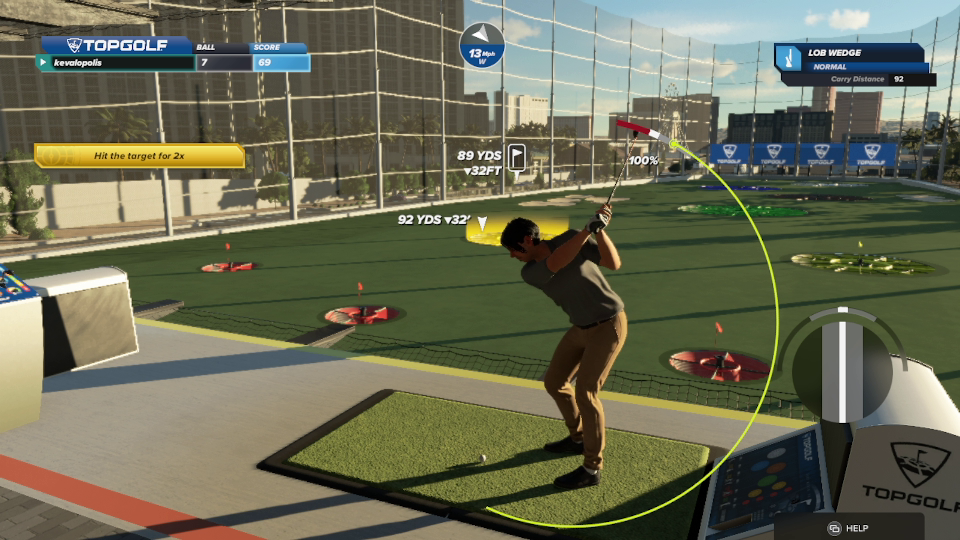 Topgolf will be coming to PGA Tour 2K23 and, at first glance, it looks as if it’s going to be a welcome partnership for fans of the series. With everything that PGA Tour 2K21 did right as a golf video game, it was still lacking in quick and innovative game modes that could have you claiming some bragging rights over friends and strangers alike. Divot Derby was a nice addition well after the game’s release, but it didn’t have all that much lasting appeal and wasn’t something you could enjoy locally on the couch with buddies. That’s where Topgolf has stepped in to fill a void as a mode with potential in PGA Tour 2K23 thanks largely to its straightforward approach and dynamic scoring system.

For those unfamiliar with the sports entertainment company (count me in that camp since they don’t currently have any locations in Canada), Topgolf venues are essentially high-tech driving ranges where you hit balls that are being tracked electronically off elevated platforms. You aim for targets that are illuminated at various distances along the course and get points for the accuracy of your shots. It’s a modern twist on a time-honored tradition of seeing how far and accurately you can hit a golf ball.

In PGA Tour 2K23, you can square off locally or online in games with anywhere from one to four players. Each golfer has just a few minutes to hit their 10 allotted balls at targets of various sizes scattered throughout the course in front of you (though there’s no time limit if you’re practicing solo). With each ball you hit, one specific target will be illuminated that will allow you to score double the amount of points you normally would for hitting that specific target. If you do get your ball to land within that target, you’ll get triple the amount of points if you hit the next target that’s lit up with your following ball — and for every subsequent one after that until you miss one.

All targets are separated into several sections with metal dividers, and just how closely you can get your ball to land to the center of the target will ultimately determine the number of points you’re awarded. To complicate matters more, it’s also possible for a ball that’s looking good to bounce off those metal dividers and land either somewhere else within the target or even out of the target completely. Of course, if you happen to be off with your swing and shank a shot left or right, it’s easy enough to miss all of the targets entirely and get zero points for a ball. The winner of the game is whoever has the most points after all 10 balls are hit or the timer runs out.

There’s some strategy involved with each shot too as you can decide whether or not to go for double or triple the points on a longer target, for instance, or play it safe and ensure you at least collect some points on one of the targets at a shorter distance. Similarly, you might be convinced that you’ll be able to hit one of the longer targets, but you have to bear in mind that you could potentially rack up more points by hitting one of the shorter targets closer to the center. If you take too much time to consider all of these factors though, you’ll run the risk of having time expire at the end and not getting a chance to hit a ball or two.

From the few games that I had the chance to play online against others, it was definitely the kind of mode where I was eager to load up another match right after one ended. When playing this mode, you’ll have the option to play online with simultaneous play (everyone shoots at the same time), and with couch play you’ll have the chance to play at the same time or trade turns.

Even though I was getting beat pretty badly at times in the matches I played, I was excited to jump back in and give it another try, convinced that this time around I’d be able to keep my shots straight with better stick control and timing. It always has to be considered a good first impression for a new mode when you’re consistently losing and yet still able to find it fun.