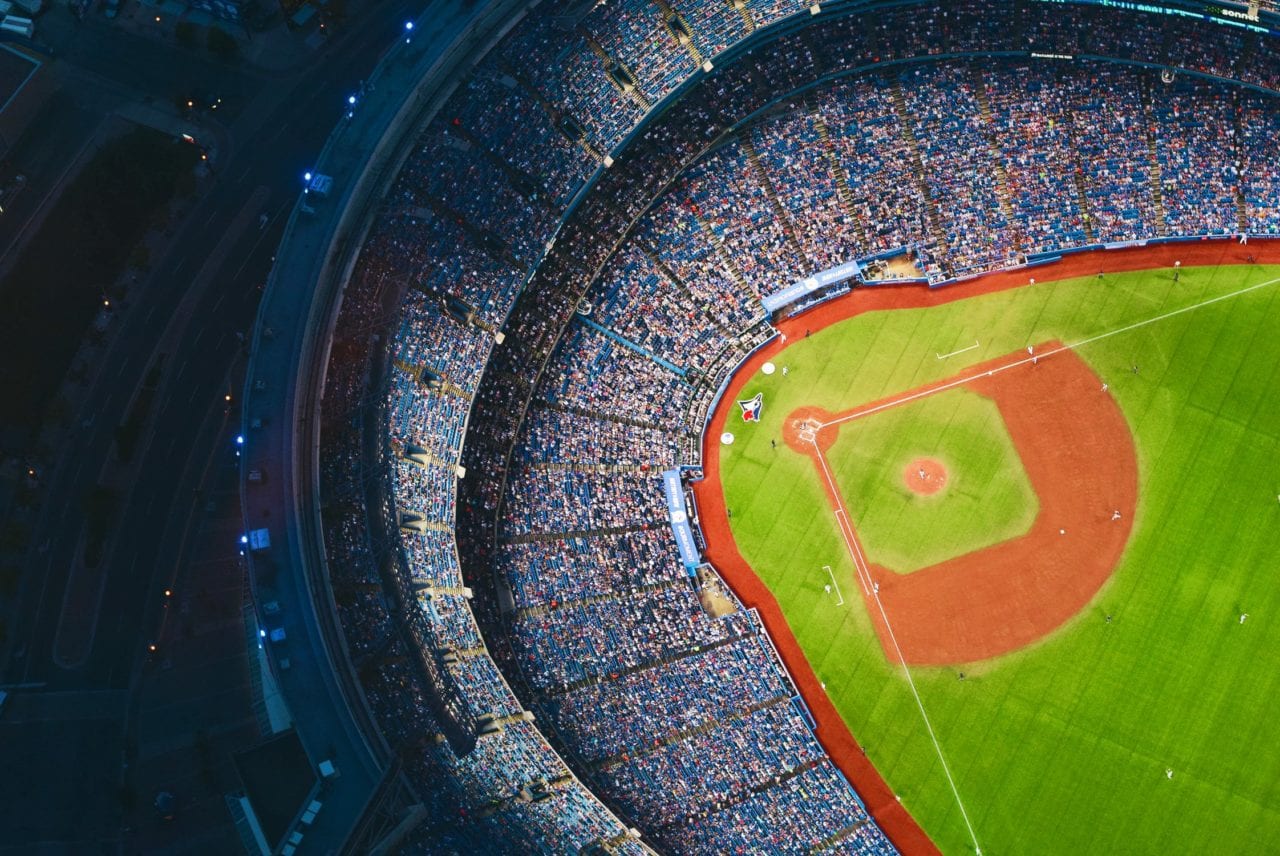 MLB The Show 19 does an amazing job at re-creating the cathedrals of our favorite baseball teams. And over the course of the sport’s deep and rich history, stadiums have always seemed to carry their own persona, and many fans have grown as attached to them as they do to the teams that play within their walls.

Even with the bevy of stadiums, both current and past, that MLB The Show offers up, there are so many more I would love to see make their way into the series. So I wanted to look at 10 stadiums I personally would to see in the game, and why I consider them so iconic. 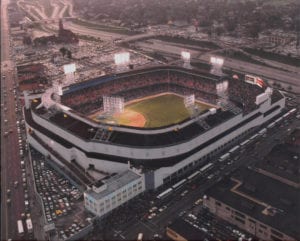 One of the most iconic stadiums in MLB history, Tiger Stadium saw Ty Cobb as a regular for 14 years, Babe Ruth hit a home run that was estimated between 575-600 feet, the Iron Horse (Lou Gehrig) ended his consecutive streak of 2,130 games played here, and it served as home to one of the best teams ever assembled in the form of the World Champion 1984 Detroit Tigers. 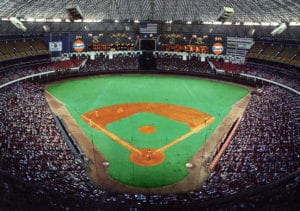 Promoted as the “8th wonder of the world” when it opened, the Astrodome was the first stadium to install an artificial turf playing surface, the first animated scoreboard in MLB history, and saw Mickey Mantle provide the stadium’s first single and home run. In 1986, the Astrodome played host to a 16-inning playoff game between the Mets and the Astros, the longest playoff game in MLB history (at the time). 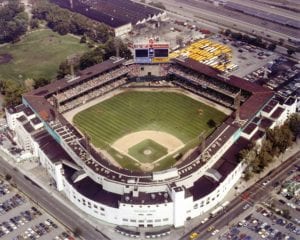 The stadium, located on the “Southside” of Chicago, saw four World Series, the infamous 1919 Black Sox scandal, and the birth of famous broadcaster Harry Caray’s seventh-inning stretch rendition of “take me out to the ballgame.” The stadium also had the “picnic area” and one of the most famous scoreboards in MLB history that had exploding pinwheels after each Sox home run. 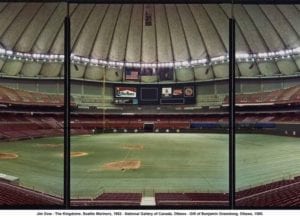 While not providing as many historic memories as most iconic MLB parks, the Kingdome was the setting for one of the greatest playoff games in MLB history on October 8, 1995, as the Mariners defeated the Yankees in 11 innings. Sixty-thousand fans (and millions more on TV) saw Mariners star Edgar Martinez double home Joey Cora and Ken Griffey Jr., to win the playoff series, and vault the Mariners to their very first ALCS. The Kingdome was also the birthplace of MLB greats, Alex Rodriguez and Ken Griffey Jr., and on June 27, 1999, Ken Griffey Jr. hit the very last home run in Kingdome history. 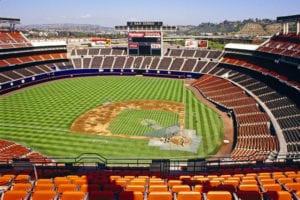 Considered by many as a typical “cookie-cutter” stadium design, the “Murph” has gone through multiple name changes and stopped hosting the Padres in 2003. While not an iconic venue, JMS was home to MLB legend Tony Gwynn, and in 1984, provided the backdrop for one of the most memorable MLB playoff comebacks, as the Padres (down 2-0 in a best of five series) came back and defeated the Chicago Cubs three games to two and sent the Padres to their first World Series. Other notable moments in the history of the “Murph” saw Dodgers Pitcher Orel Hershiser break Don Drysdale’s scoreless inning streak, and Oakland A’s great Rickey Henderson collect hit 3,000. 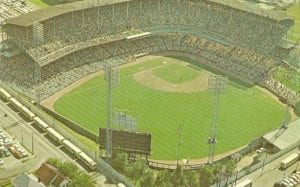 Although Municipal Stadium opened in 1923, it did not host an MLB team until The Philadelphia A’s relocated to Kansas City in 1955. The stadium was home to the Negro League’s Kansas City Monarchs (The NNL’s longest-running franchise) who provided 11 league championships and was home to the legendary Buck O’Neil and Jackie Robinson (before signing with Brooklyn). Municipal Stadium was also the birthplace of A’s greats such as Reggie Jackson, Sal Bando and Catfish Hunter — and, of course, eccentric owner, Charlie Finley. The Kansas City Royals left Municipal for the greener pastures of Kaufmann Stadium in 1972, and Municipal was demolished in 1976. 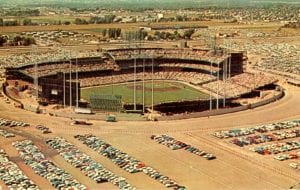 Home to the Minnesota Twins, the Met was almost the new home of The New York Giants until they picked California as their final landing spot. After losing the Giants to San Francisco, Washington Senators owner Calvin Griffith moved his team to the Met and renamed them the Minnesota Twins. The home of Harmon Killebrew, the venue also hosted both the MLB All-Star game and World Series in 1965, and in the inaugural game of the Met, the Twins hosted the new Washington Senators and lost 5-3. The famed Mall of America now sits atop the previous location of Metropolitan Stadium, but the home plate of the now-defunct stadium sits immortalized inside the mall for all to see. 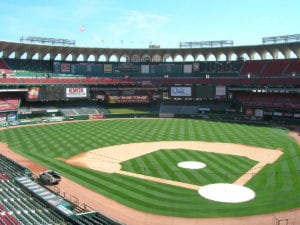 The stadium hosted the MLB All-Star game in its inaugural season and hosted six World Series in its lifetime. The grass was replaced in 1970 and fitted with AstroTurf, and saw temperatures during the infamous St. Louis summers reach upwards of 120 degrees on the field. The stadium was home to the iconic sixty-second home run from Cardinals great Mark McGwire, and although deemed by many as just another cookie-cutter stadium, the crowned arches that sat atop the stadium and iconic scoreboard gave “Busch II” its own unique look and feel. 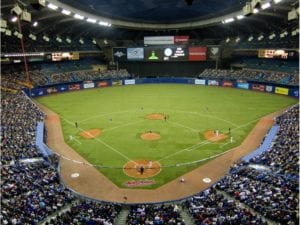 Home to the now-defunct Montreal Expos (Washington Nationals), Olympic Stadium was built with a retractable roof (finished and installed later) and an Olympic-size swimming pool under the stadium’s tower. Billed as one of the most advanced stadium designs ever, Olympic stadium seemingly had one issue after another, with roof issues, playing surface issues, outfield wall issues, and in 1986, a large chunk of the tower fell onto the playing field prior to another Expos game on August 29 against the San Diego Padres. Even with the stadium’s multiple problems, the Expos drew large crowds in the late ’70s and early ’80s, and fans witnessed such baseball greats as Andre Dawson, Tim Raines, Gary Carter, Pedro Martinez and many more. 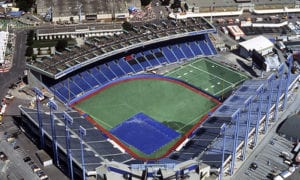 Exhibition Stadium was another dreaded “multi-use” stadium design, and one widely considered never suitable to host an MLB team, but in 1977 the stadium did just that. Although initially it was supposed to be the San Francisco Giants that relocated to Toronto, when that plan failed, Major League Baseball awarded Toronto an expansion team and thus the birth of the Toronto Blue Jays. The stadium was so ill-fitted for baseball that Blue Jays’ President, Paul Beeston, noted Exhibition Stadium “wasn’t just the worst stadium in baseball, it was the worst stadium in sports.” Even with the stadium’s issues with fog, cold and wind, the configuration would be amazing to play at in the MLB The Show series.

How likely is it that we see older, now defunct stadiums in future iterations of The Show? Not very. In fact, the developers have gone on record stating that, for now, the time and effort it takes to create the retro stadiums is simply not worth the return. While they may change their stance on this in the future, I think the best fans can hope for would be an incredibly detailed stadium creator.

Which stadiums would you like to see added to the game?