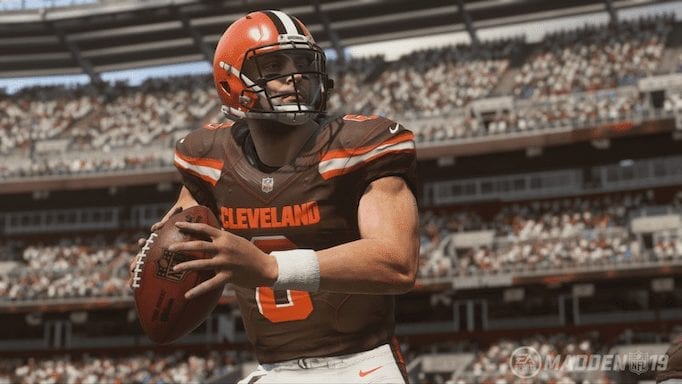 It can be hard to decide with which team you’d like to start your Madden Connected Franchise. After all, there are 32 teams that could make a case for being the franchise of your choice. Once the NFL offseason begins and teams start to take shape, it becomes a bit more clear which teams have the potential to do big things over the next few seasons. The same holds true in Madden. Trades and free agent acquisitions are made in real life, and then added to their virtual counterparts. However, it isn’t until player ratings are released that we really start to get a grasp for which teams are the most appealing.

Here are the top five rebuilds in Madden 19

Before we go any further, I must admit I’m a Miami Dolphins fan. The team in South Florida that has been stuck in mediocrity for years is an appealing rebuild in Madden 19.

Offensively, Miami is loaded with under-the-radar talent. At running back, Kenyan Drake, Kalen Ballage and veteran Frank Gore make up one of the best three-headed monsters in the game today. Wide receivers DeVante Parker, Danny Amendola, Kenny Stills, Albert Wilson and Jakeem Grant make up an explosive receiving core, which has the ability to torch an opposing secondary. Let’s not forget second-round tight end, Mike Gesicki, whose size and speed should create favorable mismatches. The offensive line is much improved, and they finally have their quarterback Ryan Tannehill back this season.

For as good as the offense looks on paper, the defense is where the Dolphins really have superstar potential. Cam Wake will likely retire in year one of a Madden CFM, but this still leaves key players like Robert Quinn, Davon Godchaux and Charles Harris on the defensive line. In the middle of the Dolphins defense, linebackers Raekwon McMillan, Jerome Baker and Kiko Alonso are pieces to build upon. Miami’s secondary has the potential to be elite with defensive backs Xavien Howard, Cordrea Tankersley and Bobby McCain in coverage. The last line of defense for the Dolphins is strong as well, with Safeties Reshad Jones, T.J McDonald and Minkah Fitzpatrick. Combined, this makes for one of the best young defenses in the game today.

Oh, and let’s not forget their sleek uniforms, which could be something of interest for those looking for a team to begin their journey towards the Super Bowl. Fins Up!

The Bears have not been very good since their Super Bowl loss to the Colts many years ago. However, it appears things are finally starting to look up for the historical franchise.

At quarterback, Mitchell Trubisky had a solid rookie season and is destined to take the next step as the Bears’ franchise quarterback. Running backs Jordan Howard and Tarik Cohen are both playmakers that complement one another perfectly — Howard is the thunder, with Cohen the lightning. Free agent acquisitions Trey Burton and Allen Robinson complete a high-octane offense that should be fun to utilize in Madden 19.

Defensively, the Bears have all the pieces in place to rival the Monsters of the Midway. Young pass rushers like Akeem Hicks, Leonard Floyd and Aaron Lynch will give opposing quarterbacks nightmares. In the middle of the defense, first-round pick Roquan Smith joins Danny Trevathan as one of the better linebacker duos in the league. Lastly, Chicago’s secondary is loaded with talented players like Prince Amukamara, Kyle Fuller and Eddie Jackson.

Although it appears the rebuild is nearly complete, getting the Bears back to the top in the NFC North is a challenge all on its own.

The Giants, unlike other teams on this list, have had success over the last decade. Most notably, they defeated the undefeated New England Patriots in Super Bowl XLII. It is no secret, however, that the New York Football Giants have taken a step back in recent years.

On offense, the pieces are still in place for the Giants to light the NFL on fire. Quarterback Eli Manning still has a few years left, and with Kyle Lauletta awaiting patiently in the wings the QB room looks a lot better now than it did a year ago. Running back Saquon Barkley might be the best back to come out in decades, and will be an immediate superstar in Madden 19. At wide receiver, former Madden cover athlete Odell Beckham Jr. is fully healed. Sterling Shepherd will be the Giants’ second option at wide receiver, while tight end Evan Engram will be a mismatch nightmare versus your opponents.

New York’s defense has been up and down over the last several years. The Olivier Vernon signing wasn’t smart financially, and trading away Jason Pierre-Paul wasn’t the smoothest of decisions. However, the Giants still have key playmakers throughout the defense. Newly signed veteran linebacker Connor Barwin and Olivier Vernon will get to the quarterback, while Eli Apple, Janoris Jenkins and Landon Collins lock it down in the secondary.

The Big Apple is tough for some players but this team should be fun to rebuild in Madden 19.

The Ravens might be one of the top teams to rebuild in Madden due in large part to the thirty-second pick in this year’s draft: quarterback Lamar Jackson.

No one can take away Joe Flacco’s Super Bowl win, but his Madden days are as good as over. Gone are the days of trying to beat an opponent with a slow, average quarterback like Flacco. Enter Lamar Jackson, the most exciting rookie to come out in quite some time. Remember 2004 Michael Vick? That is 2019 Lamar Jackson.

Aside from Jackson, the Ravens have quite the running back trio in Alex Collins, Javorius Allen and Kenneth Dixon. Receivers have been hard to develop in Baltimore, but this year’s depth chart looks pretty good with Michael Crabtree, Willie Snead, John Brown and Chris Moore. Rookie tight ends Hayden Hurst and Mark Andrews will add a big-play potential. The Ravens offense should be fun to use in Connected Franchise.

Baltimore’s defense is exactly what you’d expect. On the defensive line, Bronson Kaufusi and Brandon Williams are nice pieces to build upon. At linebacker, C.J Mosley, Terrell Suggs and Tyus Bowser make up a young, hard-hitting core. In the secondary, Brandon Carr and Jimmy Smith are the starting defensive backs, while Eric Weddle and Tony Jefferson play deep at safety.

There are very few teams in Madden 19 with a more enticing opening than the Baltimore Ravens.

Cleveland has been the absolute laughing stock of the NFL for the last several decades. The franchise has passed on endless quarterbacks, and never seem to make the right decisions — until now.

First-overall pick Baker Mayfield might not start immediately in the NFL, but he will in Madden. He’s the perfect mix of mobility and accuracy, and should be one of the most utilized players in this year’s game. At running back, Cleveland has a stable of capable backs. Carlos Hyde, Nick Chubb and Duke Johnson are all capable of carrying the workload. Newly acquired wide receiver Jarvis Landry, Josh Gordon, and Corey Coleman make up one of the better receiving cores in the NFL. Don’t forget tight end David Njoku, who had a solid rookie campaign.

For as stacked as the offense is, the defense is just as powerful. Pass-rush specialists Myles Garrett and Emmanuel Ogbah are two bookends who can wreak havoc on opposing Quarterbacks. At linebacker, Jaime Collins, Joe Schobert and Christian Kirksey make up one of the best units in football. Lastly, Denzel Ward, E.J Gaines, Jabrill Peppers and Damarious Randall make life difficult on opposing receivers.

All of these pieces are extremely young and make for the perfect rebuild project in Madden 19.

Which team are you most excited to rebuild in Madden 19?  Let us know in the comment section below.