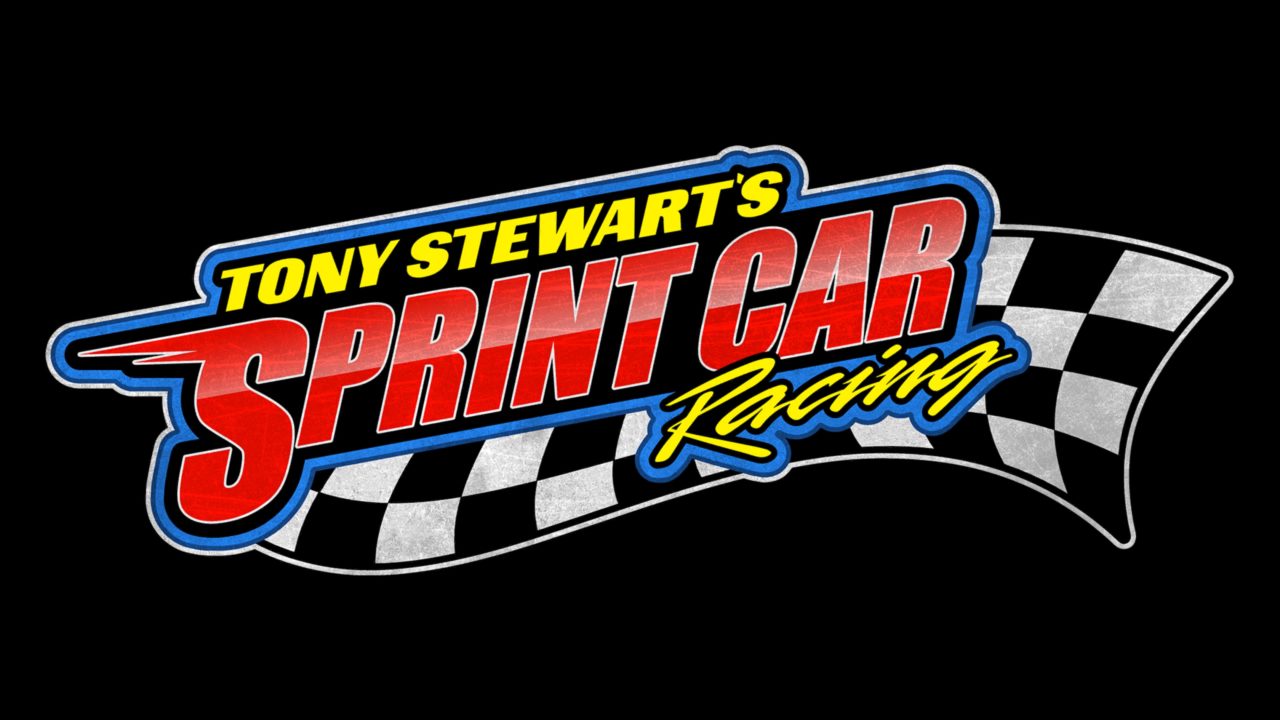 For those who may not know, Monster Games is behind the creation of one of the best racing titles to ever grace a console, Dirt To Daytona. It was a game that was so well received by critics and community that many in the racing community still play it today, whether through original console or emulation.

Unlike NASCAR Heat and Dirt to Daytona, Tony Stewart’s Sprint Car Racing (TSSCR) only deals with dirt track racing — the NASCAR license is exclusively held by 704Games. That being said, is the game good enough that, license or not, this title deserves to be played? Let’s discuss.

I am going to reference NASCAR Heat 4 right off the bat because if you have played that title, this career mode will feel like an extension of that one. If you haven’t, then what you can expect when you first fire up career mode is a relatively robust mode with some depth and longevity to it.

When you first enter career mode, you will be given the option to create your driver and choose your outfit and paint scheme. 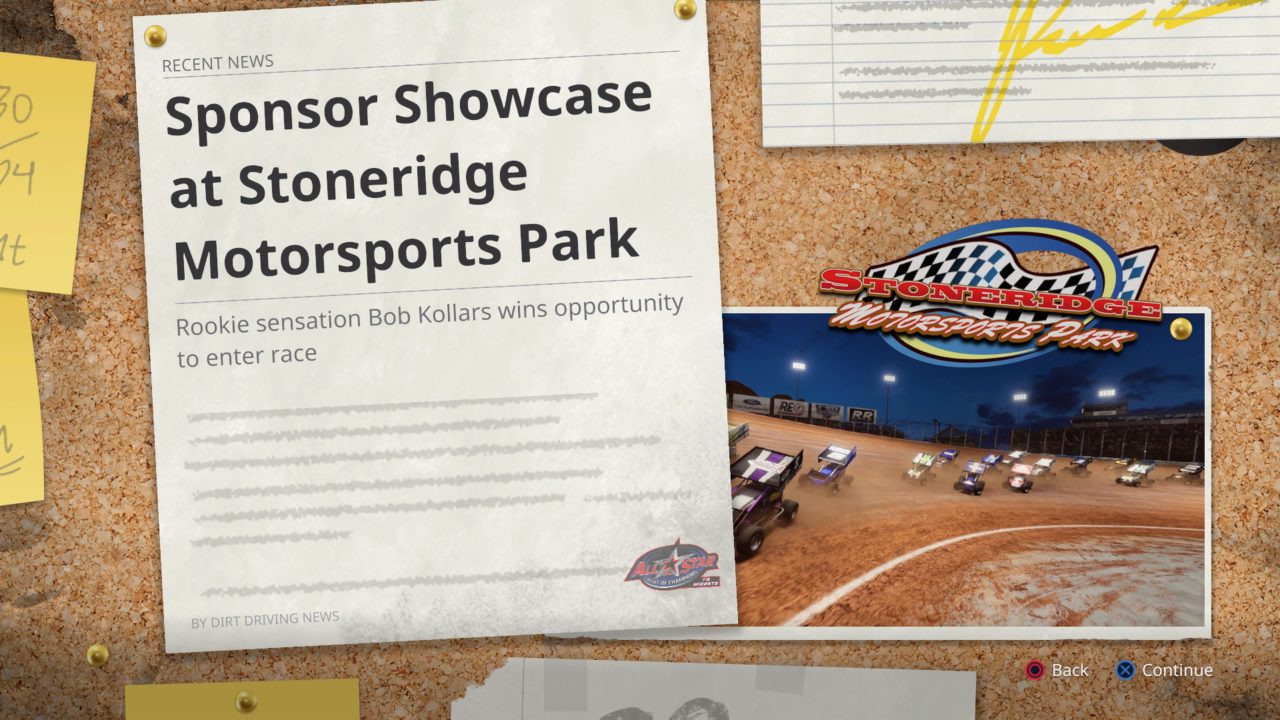 The mode starts you in the less powerful TQ (Three Quarter) Midget single-seat, open-wheel variety to help get your career going. This forces you to acclimate yourself to the feel of racing a sprint car on dirt. This a solid choice for beginning your career because unleashing the full power of the 405-sprint car on you might be a bit too much for some to handle if they are new to this style of racing.

After a certain point, the game throws an end-of-the-season scenario at you that allows you to showcase your skills for certain sponsors. Once done, you will be given the option to choose your sponsor and paint scheme for your upcoming inaugural season. From there, you’re truly off to the races.

As the season progresses, you will be met with certain challenges presented to you by your sponsor. These challenges include the likes of turning in a specific lap time, qualifying in a certain position and finishing in a certain order. If the goals are met, then you as a driver are rewarded with monetary compensation that allows you to upgrade your current car, which is very important.

Although there is no true R&D department or resources in the game, you will have the chance to purchase new parts and upgrades with your winnings that, while seeming incremental, provide results that are tangible. With each upgrade or improvement to your vehicle, you will notice the difference almost immediately once you hit the track, which is extremely fulfilling but leaves you wanting that next upgrade right away. 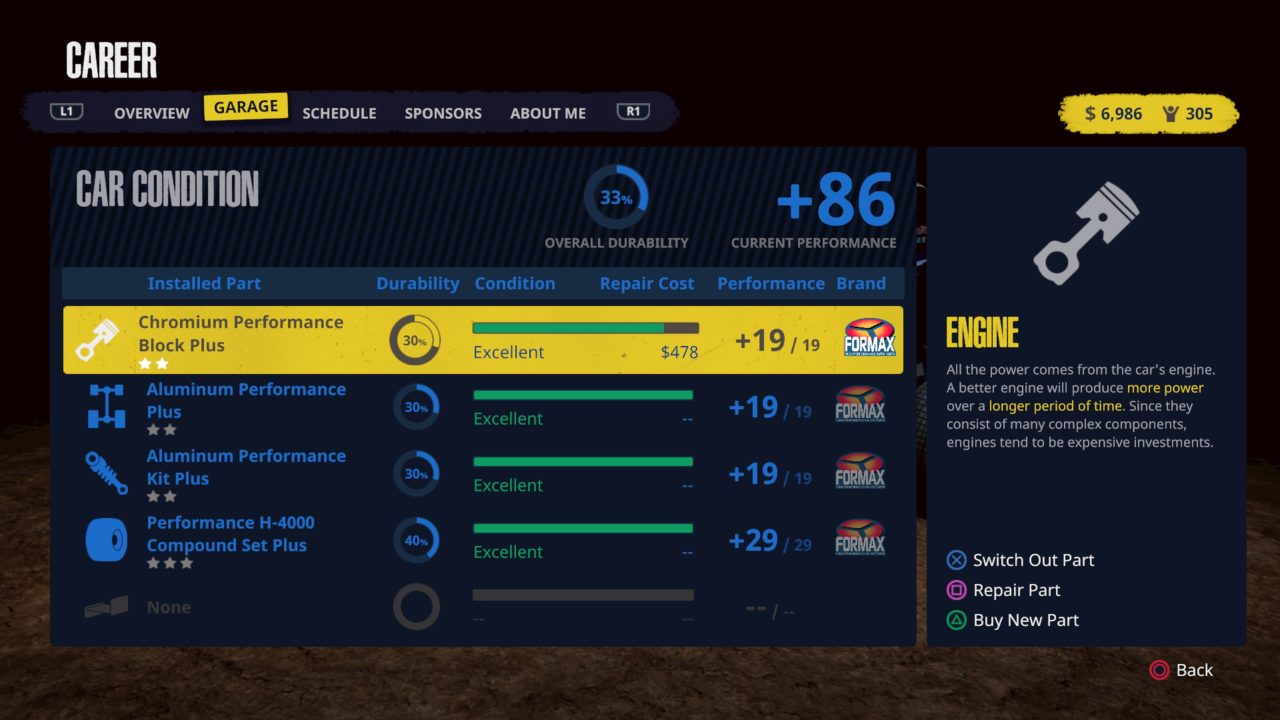 Depending on your results throughout the season, you will be offered a chance to race in the next series, the 305’s, and so on and so forth. Depending on what level of difficulty you choose to race on, the path to moving up can be somewhat lengthy and grueling, or it can go by as quickly as a single season.

I raced on hard difficulty with minimal assists, and was able to accomplish my goals and move up after one season. Regardless, the options detailing how the scenarios play out are there for you to create whatever world you want to race in while moving up.

There are some oddities in career mode, such as no sponsor or team feedback, and no way to interact with fans to boost your merchandise sales. However, the mode has some real depth to it and it provides a lot of fun and challenging situations along the way.

At the time of this review, the Steam version is not available, and therefore I was only able to test and review the game on the PS4 Pro using a PS4 controller (rather than a wheel). Thankfully, the controls still felt extremely fluid and responsive. It is not always easy providing hardcore racing fans with an authentic feel on controller while still keeping the game accessible to the masses, but Monster Games has pulled it off here.

(There are reports out there from people who have tested the title out with a wheel and have struggled a bit to get the PC version dialed into the settings they like. I cannot verify this as I have not attempted to do that as of yet.)

With TSSCR, the game responds much more fluidly if the user understands that going fast is not the only option. The ability to command and “feather” the left analog stick will determine much of the success of what you see and feel on each track. 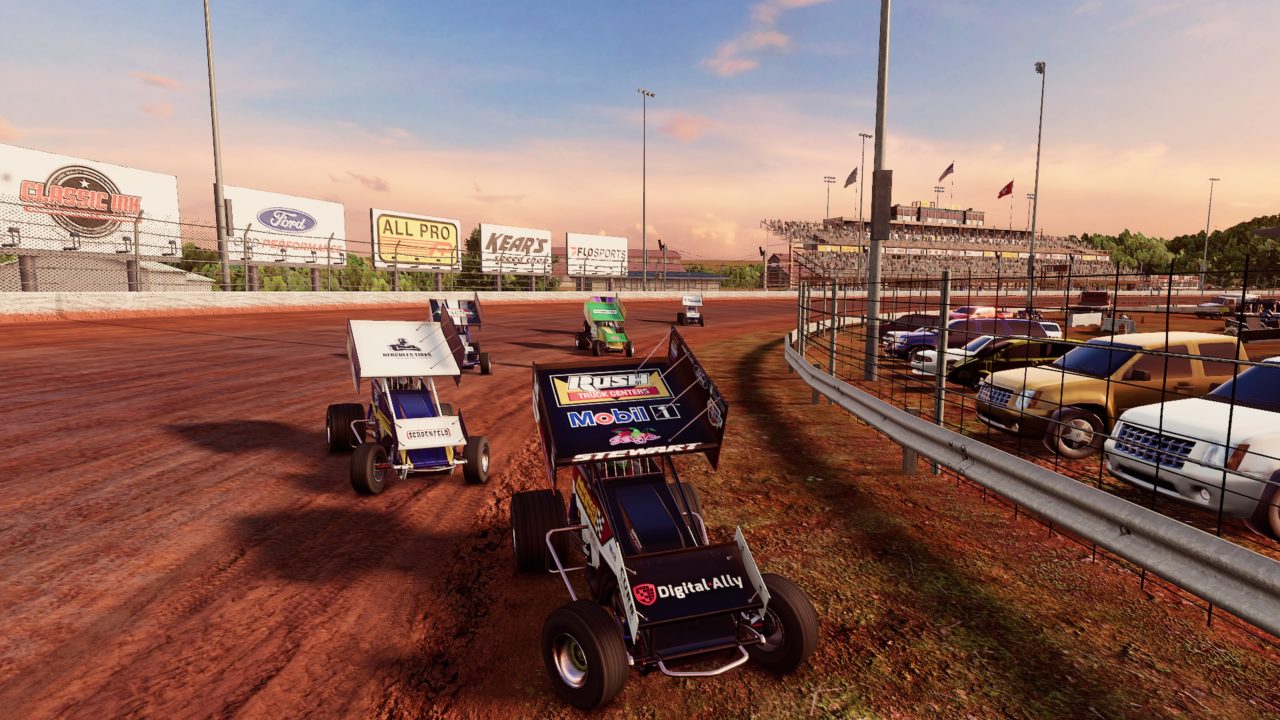 The game provides multiple racing venues, and each one throws a unique experience at you. Taking the time to understand the different approaches to each venue and how the vehicle and controls react and respond to each track will ultimately have a large impact on how successful you are.

Monster Games also generally provides multiple internal options, vehicle setups and difficulties that can alter the experience as it flows from extremely easy to rather difficult and frustrating — depending on what level of masochism you want from your racing game. Regardless of where you end up on the difficulty scale, the handling and control of each vehicle should feel varied, connected and responsive.

Anyone who enjoys the racing genre in video games understands how important AI drivers can be to the success (or failure) of each title. This rings especially true when it comes to career modes, and TSSCR is no different. Thankfully, the developers at Monster have created a solid base of AI drivers that vary in talent, skill and aggressiveness on the track. The game also provides an internal option that, if turned to spread or tight, will keep the pack together or spread them out.

In my time with TSSCR, the AI provided an enjoyable and realistic challenge. Not only that, the variation of aggressiveness when racing with the donkeys in the back versus the talented drivers in the front showed off how differently the AI can act depending on where you are in the field. The back of the pack was easy to navigate and move within, while the more talented drivers fought to block you, move up into your path and stop your momentum.

Seeing the AI react and compete on the higher difficulty levels was both exciting and frustrating, and at times mimicked that of racing against human opponents. Many an expletive were dropped by me while racing to finish in the top five, but I never felt cheated or that the AI had an unfair advantage. It was just quality competition that I could enjoy cursing.

For me, career mode is where most of my time was and will be invested, but the game does provide multiple options when it comes to racing. If career mode isn’t your thing, TSSCR also has the option for quick races, championship mode, 25-player online multiplayer matches, local split-screen and more. 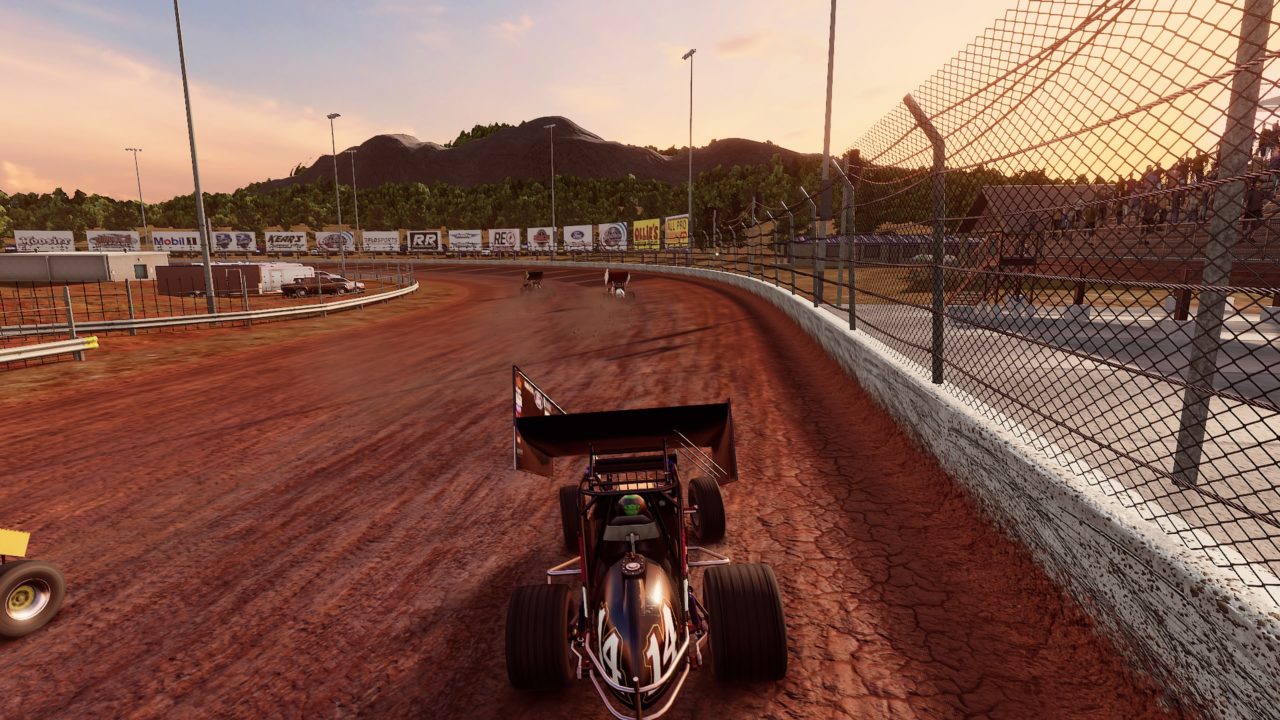 The game also tracks the medals and accomplishments you have secured over the course of your time with the title, and these accomplishments can be viewed at any time. Inside career mode, TSSCR has a dedicated page to show the history of your career, including how many races and seasons you have finished, career placements, how many poles you have won, and what current championships you are racing in right now.

As mentioned before, the game does a very solid job of offering multiple options in both difficulty and approach for the user, and all these things can be adjusted race to race. So as you improve as a driver, the game can adjust along with you — if you want it to.

As good as Tony Stewart’s Spring Car Racing is in many areas, the damage model is poor at best. There is an option provided to have damage on, off or light, but I basically noticed minimal differences between them. This is a shame because if you have followed any type of dirt racing at all, then you understand how impactful damage can be as it relates to the precision and ability of these vehicles.

At no time did I witness wheels being bent or flying off, suspensions being altered or alignments being impacted. This is a rather large oversight, and I could not lose myself in the racing experience as much as I wanted to because of it. If you are going to provide three options for damage, then obviously there should be three levels of impact on the vehicle. The only difference that was noticeable was the amount of repairs needed, and the cost associated with those repairs at the end of each race.

While the game does provide an incident/flag system, it seemed the only time an incident occurred was when it involved me. Not one time in over 15-plus hours with this Tony Stewart’s Sprint Car Racing did I see a single caution thrown that didn’t involve me — and this includes multiple difficulties and modes. 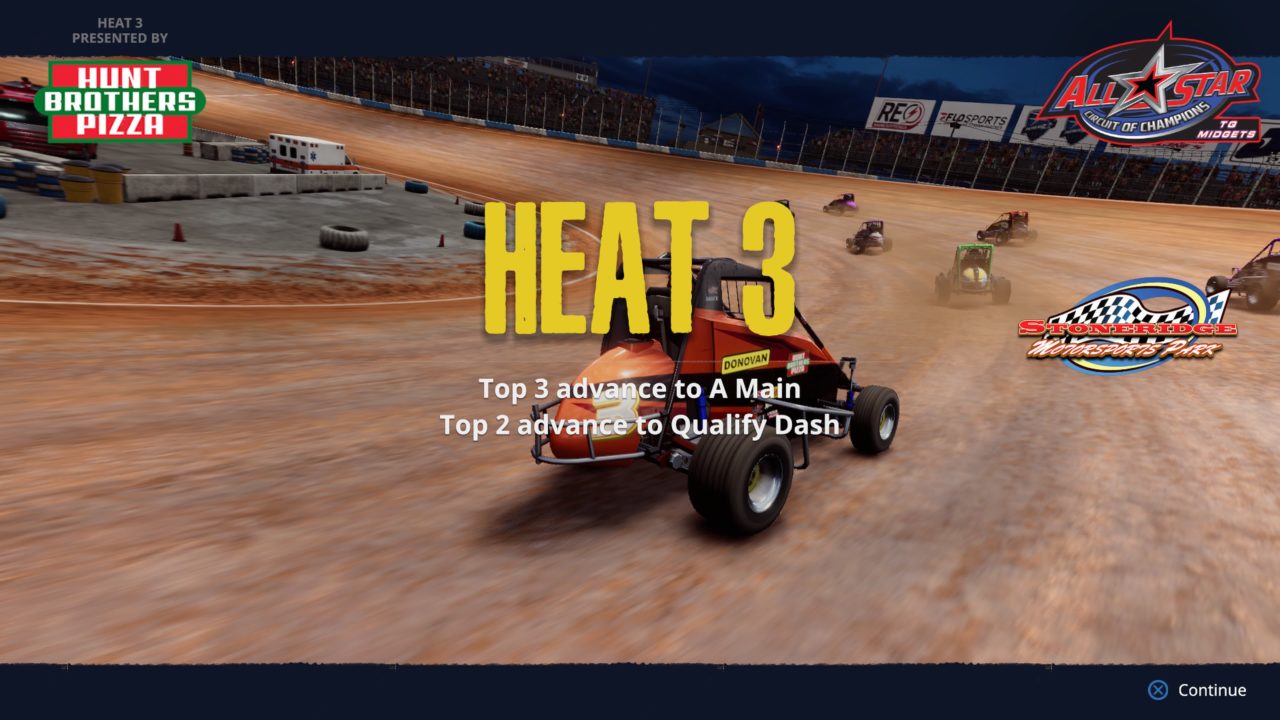 Now that’s not to say I didn’t see the AI being aggressive with each other and fighting for position, but that aggression and competitiveness never resulted in a yellow caution being thrown, again, unless I was involved. I am not sure this can be addressed in a patch, but also hurt my ability to lose myself in the racing. It doesn’t impact my enjoyment of the game in the same way the lack of a quality destruction engine does, but it’s still a net negative.

I had the privilege of spending a whole evening sitting in a suite at Knoxville with former WoO champion Danny Lasoski, and he spoke multiple times to me about how his on-track approach changed depending on how that track changed over the course of a race night. Sadly, that type of mindset isn’t needed in TSSCR, and track degradation and weather never have an impact on the game because it’s not part of the game.

I understand this is a first-run title with limited development, and certain areas are going to be lacking and need addressing in a patch or sequel, but a poor flag system and track degradation probably should not be areas that are ignored. These are large components of real dirt track racing and they should not have been ignored.


It has been a long road back from the days of Dirt to Daytona, World of Outlaws and Dirt Track Racing 2 (all from 2002), but if the initial iteration of Tony Stewart’s Sprint Car Racing is any indication, we may be in store for another run of games in the genre. TSSCR certainly has its issues, but overall does an extremely solid job of conjuring up memories of past glory days spruced up with shiny new graphics.

For $29.99 (USD), adding Tony Stewart’s Sprint Car Racing to your rotation is an absolute must for racing fans with any level of interest in dirt racing.

Tony Stewart’s Sprint Car Racing is available now on PS4 and Xbox One and will be available on Steam on February 21.

Tony Stewart's Sprint Car Racing Available Now For Xbox One & PlayStation 4, Next Week For PC via Steam
AO Tennis 2 Review: Another Step Towards the Grand Slam