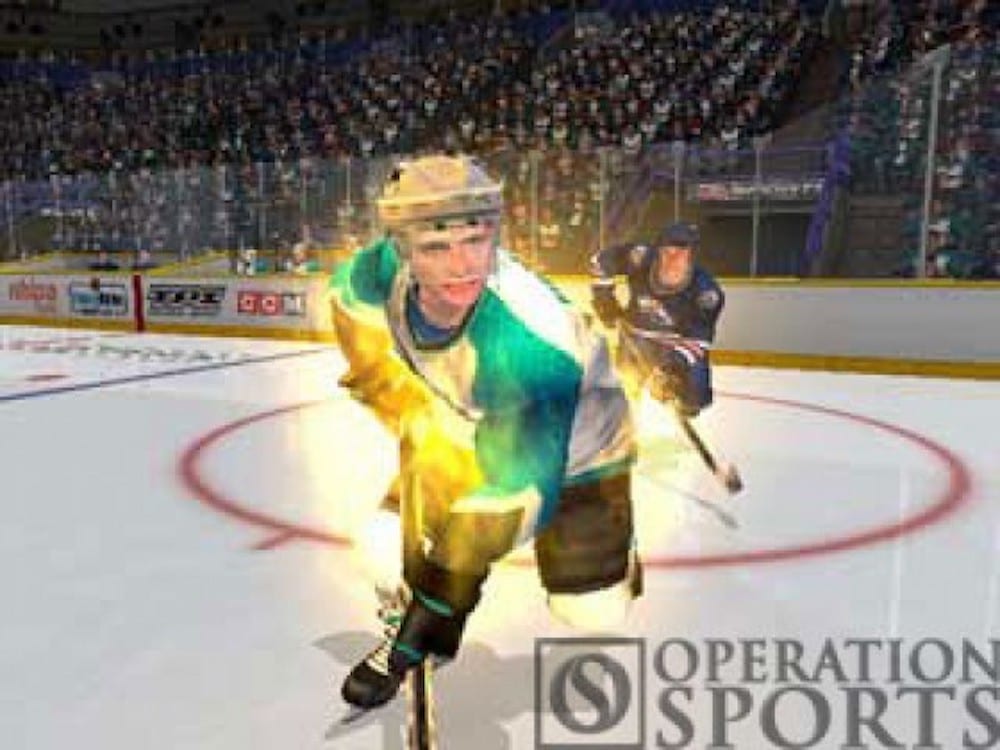 Welcome to the first Throwback Thursday post! As one can infer from the title, we will cover a different classic sports game every Thursday for your unbridled nostalgic pleasure. Join us on our trash-talking trips through memory lane as we discuss sports gaming’s all-time masterpieces. Some will be very familiar and others will be a bit obscure, but all are certified classics.

With the release of NHL 17, we felt that it would be very appropriate to begin with a hockey pièce de résistance: NHL Hitz 2003.

Hockey was a logical progression in Midway’s NFL Blitz-inspired violent and goofy sports titles, and it worked out handsomely. EA and 2K each had a hockey game releasing in Q3/Q4 of 2002, but Midway beat them to the punch. NHL Hitz 2003 is no novelty. Outside of the halcyon days of NHL on the Sega Genesis and Super Nintendo, Hitz might be the easiest hockey game to pick up and play. It arrived loaded with features in to a hyper-competitive pre-monopoly sports game market, and cemented itself as one of the greatest hockey games ever made.

Don’t let the ability to play in snowy aquariums fool you: This game is not a simulation whatsoever. The three-on-three, lighting-fast gameplay was in sharp contrast to NHL 2003 and NHL 2K3. Scores ran high and the hits were maniacally violent. Defenders were more sluggish and packed a bigger punch than some of the smaller, speedy wingers. Anyone could score from anywhere on the ice, and the speed of the game created an astonishing risk-and-reward environment that no other hockey series has achieved.

The only penalty occurred if you knocked out the opponent’s goalie, and even then, fast passing and a lack of interference penalties almost made it easier to level defenders and create breakaway opportunities. There were no offsides penalties, and if you fought and lost the losing player would be lost for the duration of the game. Fighting was even given special love, as it was a frantic rock-paper-scissors button mash of uppercuts, hooks and blocks.

A decidedly early-2000s playlist that revolved around Powerman 5000 and Rob Zombie mixed in well with the decidedly early-2000s commentary humor. Tim Kitzrow, in all of his eternal genius, maintains the game’s tempo with frantic calls. Frame rates varied between Xbox, Playstation 2 and GameCube versions, but the result was the same: Midway successfully adapted NFL Blitz for hockey and loaded it with game modes.

Exhibition, tournament and season modes functioned as advertised. Hockey School, led by the legendary Scotty Bowman, was an interactive tutorial that explained how Hitz was different from traditional hockey. Mini-games included a carnival-style shooting gallery, a one-on-one zone controlling battle, a brutal free-for-all checking melee, two-on-two keep away, a two-on-two rooftop shooting gallery that had players knocking out windows of an adjacent building, and a traditional shootout mode. Could you imagine these alone for today’s AAA sports titles?

However, NHL Hitz’s real bread and butter was its remarkably robust franchise mode that, ironically enough, bears absolutely no resemblance to a conventional franchise mode.

Players could not take their favorite NHL team and trade players around. Instead, they customized and trained an entire team from the ground up, with dozens of pre-set heads (and animals) at their disposal. This was on a different planet than MVP 2004‘s dynasty mode. Your custom team completed challenges for training points and improved equipment while eventually engaging in international tournaments instead of a traditional season calendar.

Oh, and by the way, you could go through the entire mode co-op if you wanted.

There were over a hundred secrets in NHL Hitz 2003 that were only unlocked through achieving certain goals in the game. These tantalizing rewards included alligator heads for created players, an entire team of snowmen, legendary NHL teams, throwback jerseys, and absurd stadiums like the “Berlin Auto Factory” and a graveyard. Given the current sports video game environment, one can reasonably conclude that all of these delectable secrets would have been paid DLC.

The act of actually unlocking things as opposed to a pay wall may be behind us, sure, but regular on-disc unlockable content can provide substantial longevity for games with solid gameplay. Rocket League does an incredible job of this, and its success is not coincidental. You could also look at the NFL Street and Tony Hawk’s Pro Skater series. These are games that had airtight addicting gameplay and a swath of unlockables that established them as great franchises for many years.

EA’s half-hearted attempt at a series revival, 2009’s 3 On 3 NHL Arcade, felt similar in gameplay but was utterly devoid of any sort of features. While fans clamor for a remake, one can enjoy NHL Hitz 2003 all over again on a backwards compatible Xbox 360, an original PS2 (or a PS3 with PS2 backwards compatibility), or and a Wii/GameCube.

For a game that allows you to add rain and snowfall to indoor hockey rinks, create a team of cows as your franchise team, and repeatedly check a helpless off-puck winger through the glass, NHL Hitz 2003 is a serious contender for the greatest hockey game of all-time. It is all arcade and no sim, so keep that in mind if you are trying it for the first time. Midway’s gem is as enjoyable today as it was back then, and it is especially fun when tearing through the unorthodox franchise mode with a friend.

What Playstation VR Titles Will Be Available for Launch?