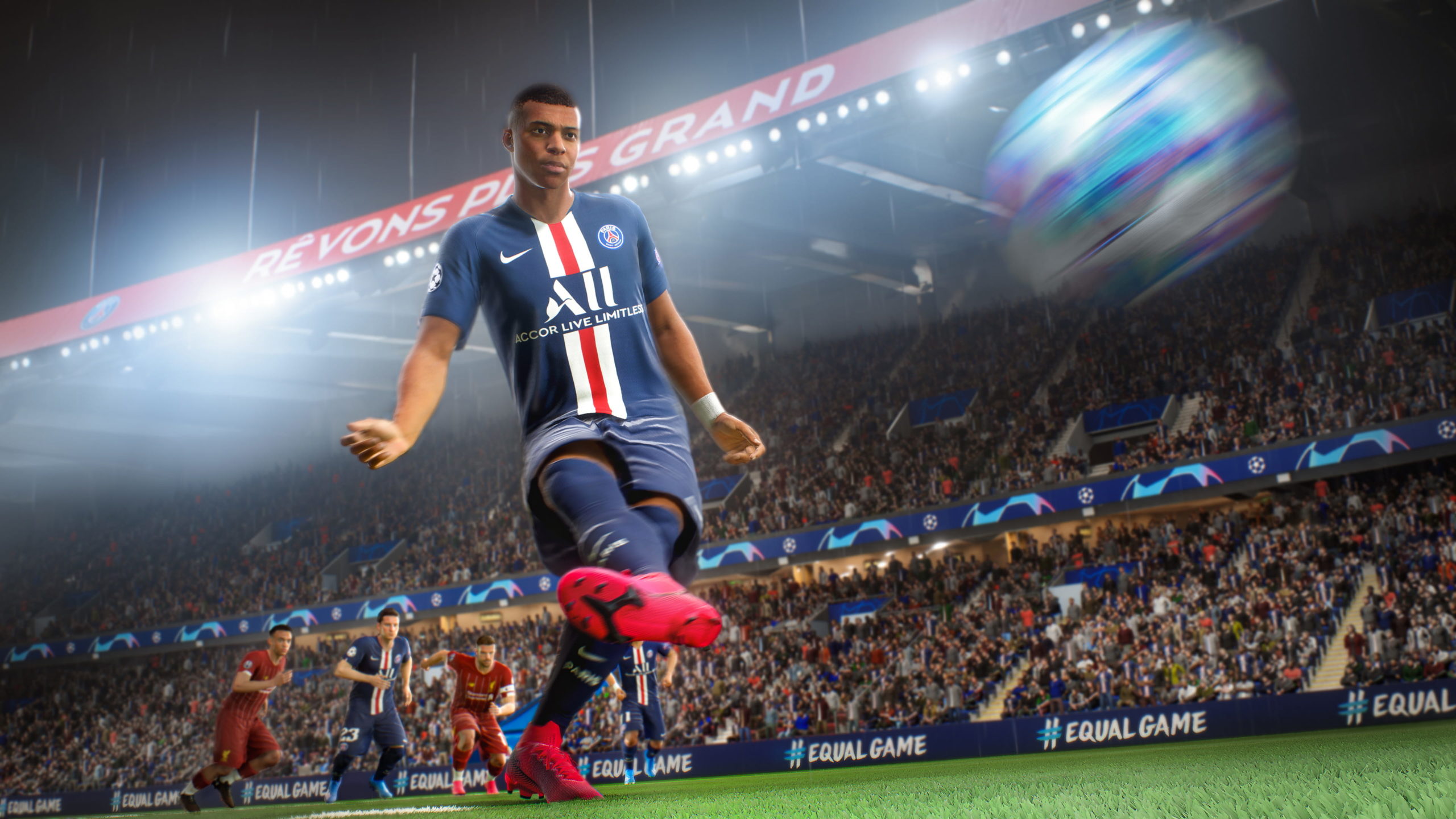 In part two of this two-part series, we’ll examine what things FIFA could steal from PES. If you missed part one where I talked about what PES can steal from FIFA, you can check it out here.

Over the years, EA has steadily increased the amount of licenses it holds in an attempt to one-up their main competitor, PES. Whether or not their shrewd business moves were aimed at increasing realism, EA has created a product that contains nearly every major license a footy fan could ask for. Regardless of how you feel about this strategy, EA has done a lot with the licenses, especially when it comes to authentic stadiums and broadcast packages.

One area that FIFA has historically been poor at is replicating how players, mainly the top players, move and feel on the ball. This is one area that PES has been outstanding in over the years. Simply put, players in PES feel different when under your control. Whether it’s a lumbering center back or a fleet-footed winger, players in PES have an individuality to them that simply doesn’t exist in FIFA.

Sure, FIFA has skill moves tied to star ratings, but the unique player movements that exist in other sports genres (mainly talking NBA 2K here) aren’t reflected in FIFA, which begs the question: “What good are licenses when the majority of players feel generic?”

This doesn’t only apply to when the players are under your control, but also to the traits that make the AI more human and more dynamic. How often do you play a top club and their main players are bystanders? Imagine playing FC Barcelona and Messi is just an afterthought? For all the faults of PES, there is something really special about how players like Messi feel when the ball is at their feet. There is a distinct difference between him and his attack partner Luis Suarez — both in how they move with the ball at their feet and in their movements off the ball.

It’s time for FIFA to utilize the power of their engine and the next-gen systems to take the next step towards realism. There are moments in FIFA 20 where player ID is clearly evident, but the more time you get with the game, the more you feel like moments like the one in this clip below are extremely rare.

Player ID in PES isn’t just reserved for skill moves or shooting, it’s the little contextual touches that sometimes provide the greatest enjoyment. Moments like the one below where Kovacic quickly shifts the ball from his right to the left foot to evade Neymar are special. After that, he then throws in the outside-of-the-boot pass just to rub it in:

It’s no secret that I am not a fan of how FIFA feels when it comes to player movement. For far too long FIFA has suffered from ice skating, which is fine if you’re playing NHL, but unacceptable in FIFA and Madden. Even slowing things down by playing on “slow” speed does little to hide the unnatural ways players move about the pitch.

Ever since FIFA moved on from Ignite to Frostbite, player movements and animations have have lacked realistic foot planting, perhaps intentionally to appease player responsiveness concerns. I can certainly understand the need for responsive controls as they play a huge factor in sports games, but when you sacrifice realism for responsiveness you are essentially giving into the crowd that says “it’s more important that my player be able to respond to my button input than to take the requisite steps that are required to complete a pass.”

In this example, OS’ own forum user QB is the player with the turquoise indicator (Ed. note: Let the record show, QB has always been a disappointment as an OTP teammate in both NHL and FIFA, yet we always give him a chance to redeem himself because he’s so lovable.) The AI attempts to play a first-time pass to QB, which goes behind his player.

Now, QB is an experienced FIFA player so there is no doubt in my mind that he releases the sprint button (a bad habit of 99.99 percent of Pro Club players) as he attempts to collect the errant pass. His player does a good job at chopping his feet (something footy and football players do when cutting), but the next logical movement would be opening up his body, swiveling and collecting the ball. Instead, his player sort of moonwalks for a little before collecting the errant pass. In normal speed, it’s ugly (sorry QB!).

If you want to look at the genesis of this issue, we must first examine when bio-mechanics took a backseat. FIFA 10 introduced 360 degree movement or simply put, being able to move in every direction possible as opposed to being limited to eight directions as we were in FIFA 09.

Look, I’m no advocate of going back to a restricted movement system, but there needs to be more punishment when moving in certain directions when the situation calls for it. Cutting corners in an attempt to increase responsiveness only hurts the game visually and realistically. Movement now seems as if your feet are detached and capable of moving irrespective of your upper body.

Sure, top sprinters would race down the track with their upper body stable. However, in a game where you cut and change directions, your upper body moves accordingly and that in-turn activates momentum and inertia. If you want some evidence of this, try shuffling side to side by planting your outside foot to stop and repeat in the opposite direction. Notice the loss of speed that occurs when your foot plants. This is because your feet have to wait for the rest of your body to catch up before stabilizing and repeating in the opposite direction.

PES gets acceleration, deceleration and changes in pace correct. You notice the difference almost instantaneously with quick players who can take advantage of defenders, wrong footing them by bursting by them with a quick double-tap of the sprint button.

This isn’t a problem solely limited to attacking in FIFA either. Defenders use this unrealistic locomotion system to change directions and keep up with attackers. Perhaps it’s EA’s attempt at balance, but seeing defenders jockey and swivel their hips with no punishment is equally disappointing. In general, FIFA 20’s pace of play vs. the AI is good, much better than PES in my humble opinion, but in contests between humans and Pro Clubs the game becomes incredibly fast-paced. Slowing the game down naturally by implementing foot planting is the easiest way to accomplish this goal and do so correctly.

To say the aerial game in FIFA 20 has been nerfed would be an understatement. I can count on one hand the amount of headers I’ve scored with FIFA 20. Likewise in FIFA 20, it’s an important part of my match day strategy, one in which I train both my strikers and wide players in hopes of scoring from crosses. The issue with FIFA 20 is a three-part problem.

Aerial crossing in FIFA 20 is anyone’s guess. Crosses in general are floaty, which is bad for a couple of reasons. First and foremost, weak crosses allow the defense valuable time to get in position to deal with them. Secondly, in order to generate the proper power on your header, your cross needs to be of equal power and whip. Despite having three different crosses to choose from (early, ground, normal), FIFA’s basic cross (simply pressing square) is never strong enough to accomplish one of these, much yet both.

Crosses like the one below are rare in FIFA 20.

This one is tough. On one hand, the freedom of movement allows you to fight the ball more and actually requires skill. On the other hand, without being locked in, you’re forced to move the left stick to get into position, which often throws off your header because the direction you’ll press to move your player to a spot will be counterproductive to the direction you want your header to go.

What was discussed in point number two (unrealistic movement) plays a huge role in negating headers in FIFA 20. Due to the poor locomotion system, defenders are able to contort their bodies in unnatural ways, helping them deal with headers they have no business getting to. Headers are about meeting a well delivered cross — normally at the apex of your leap — and directing it towards goal or away from goal when defending.

Look at how overpowered this header is below.

Moving towards your own goal, you’re able to head the ball nearly 50 yards. Toby must have the strongest neck muscles in the world!

Now, look at how PES represents the aerial game.

Here, Benteke peels off his man to find the ball and meets it at its apex, heading the ball back across goal. That’s what a header is supposed to look like. The only unbelievable aspect is that Benteke scored.

When you combine these three issues, you get an unpredictable outcome. It’s an outcome that removes all sense of control from players. Factor in the element that multiple players still don’t compete for crosses, nor do they actually miss the ball, and you get a totally random experience. Not only does this rear its ugly head during the normal run of play, but it essentially nerfs set pieces, a hugely important part of soccer.

In order for FIFA to expand its lead over PES, several changes need to be made. Most of the required improvements tie directly to the action on the pitch as opposed to off of it — the area where PES typically struggles. With the license market pretty much locked down, FIFA can afford to take that next step. This would be a vital step towards realism and making FIFA look and feel like real soccer instead of a game that is only believable for a few brief moments.

What aspect of PES would you like to see implemented into future FIFA games?

Cancel reply
Discussion
Click here to reply to the discussion
Continue Reading
You may also like...
Related Topics:fifa 21, fifa 21 wish list, how pes is better than fifa, spotlight, things fifa can steal from pes