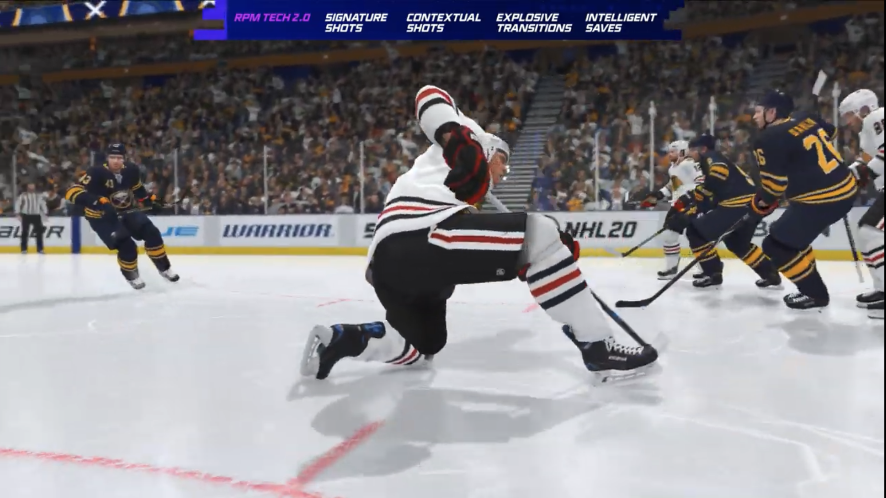 First off, how bad did they make NHL 19 look in the NHL 19/NHL 20 comparison part of the video. If there is anyone out there who still doesn’t understand the hardcore NHL gamer’s level of frustration with the series over the last several years, just check out those clips.

That being said, while it was long overdue, NHL 19 finally took some strides forward mainly by improving its skating mechanics. NHL 19 introduced Real Player Motion technology or RPM and NHL 20 looks to double down on that with RPM 2.0. Real Player Motion technology will also move forward by focusing on highlighting the league’s best and most lethal snipers’ signature shots. In addition, EA also spent time adding more realistic shot animations in general, reworked goaltending animations, and (like every year) improved puck pickups.

The latest video is nearly three minutes and shows off some impressive new features. For the first time in years, I will admit this video does have me a little excited to get my hands on the new yearly NHL release. However, that doesn’t mean there aren’t still some question marks and head scratching with the latest NHL 20 gameplay trailer. In this article, I’ll take a deep dive into what I thought was good and bad in the latest NHL 20 trailer. If you haven’t seen it yet, you can check it out here:

In watching the trailer, was anyone strictly looking for AI improvements/lack there of? I was definitely on the lookout. While it was tough to get clear looks at the AI, I did find the above screenshot that immediately drove me nuts. Can EA please explain the Dallas defenders’ coverage? As mentioned above, I am impressed with everything EA talked about in the video and I’m looking forward to seeing more. However, a major and constant gripe among NHL gamers for years has been CPU and teammate AI. The game can look great, but if it’s not playing great and imitating the real life product, what’s the point? I don’t think many teams deploy the above D-zone coverage. Well maybe Ottawa. Sorry Ottawa.

Goals Shown In The Trailer

Over the last several years, or maybe even since the series was introduced, every gamer knows a surefire way to score goals is with the use of one timers. Almost every goal in the trailer was scored off of a one timer. It would of been nice to see a bit more variation or creativity of goals being scored to really get gamers excited about NHL 20. I also double down on that sentiment considering the fact that EA has said goalies are now better able to identify scoring threats on the ice. If a goalie knows Ovechkin is over on the half wall waiting for a one timer, it would make sense to show off a goaltender cheating over that way to make a spectacular save. That being said, I recognize that they were highlighting signature shots — and one timers play a role in that feature — so they get a little bit of a pass for now.

From everything I’ve seen so far regarding signature shooting, it all looks awesome. The quick/off-balanced shooting animations look great and are long overdue. Now, while performing dekes you will actually be able to take a quick/real backhand. (Did I mention how horrible the NHL 19 comparison clips were?) EA has stated that there are over 45 new shot animations that are being introduced in NHL 20, which is a nice step in the right direction. However, my only pause for concern would be what kind of shooting animations do the likes of Ryan Reaves and Matt Martin have? Since EA has already informed everyone that only 18 players will have signature shots, what will the rest of the shot animations look like for the good but not great 15-20 goal scorers?

Another major issue for the last several years with this franchise has been puck pickups/transitions. No matter if your skater was heading to the corner to grab a loose pick or your winger was exiting the defensive zone and receiving a pass from the defenseman, you were never able to maintain your speed. EA talks about this in the new video stating “in previous years, players would move into locked animations while attempting to transition.” In the new video, we saw a few transitions that looked beautiful, crisp and like real life. Furthermore, the puck pickup clip featuring the NHL’s bad guy Brad Marchand looked even more beautiful. It was something I have never ever seen in an EA NHL game before. If this new trailer is accurate, this new feature will add so much more to the NHL series and truly has me stoked to finally see some progress to areas that have constantly been a thorn in the side to the EA NHL masses.

The first example of these new animations/goalie threat analysis, is a clip of Boston Bruins goalie Tuukka Rask using his blocker to actually direct the puck to the opposite corner and away from danger. This is a huge addition if it plays out the way EA says it does. Too often in NHL 19, weak shots from the outside would hit the goalie and just sit there in front of him resulting in frustrating rebound tap-in goals. Next, Montreal goaltender Carey Price is shown using his stick to direct a shot from far out out of danger and into the corner. This is awesome. EA also stated that with the addition of goalie threat analysis they added over 450 new save animations.

Goalie covers are also a new feature in NHL 20. Goalies can now resolve covers without having to reset and start again, making them more responsive in the mechanic. Initially, Minnesota Wild goaltender Devan Dubnyk has a shot hit him and squeak through his arm, and instead of last year’s game where the goalie would just fall on his back to cover the puck, he actually reaches back to cover the puck. Additionally, EA says goalies can cover the puck with their glove or pin the puck against the side of the net with their stick or blocker.

I still have some question marks and pauses for concern when it comes to NHL 20 being strides ahead of NHL 19, but to be honest, I’m actually looking forward to seeing more.

What did everyone notice from the new trailer?