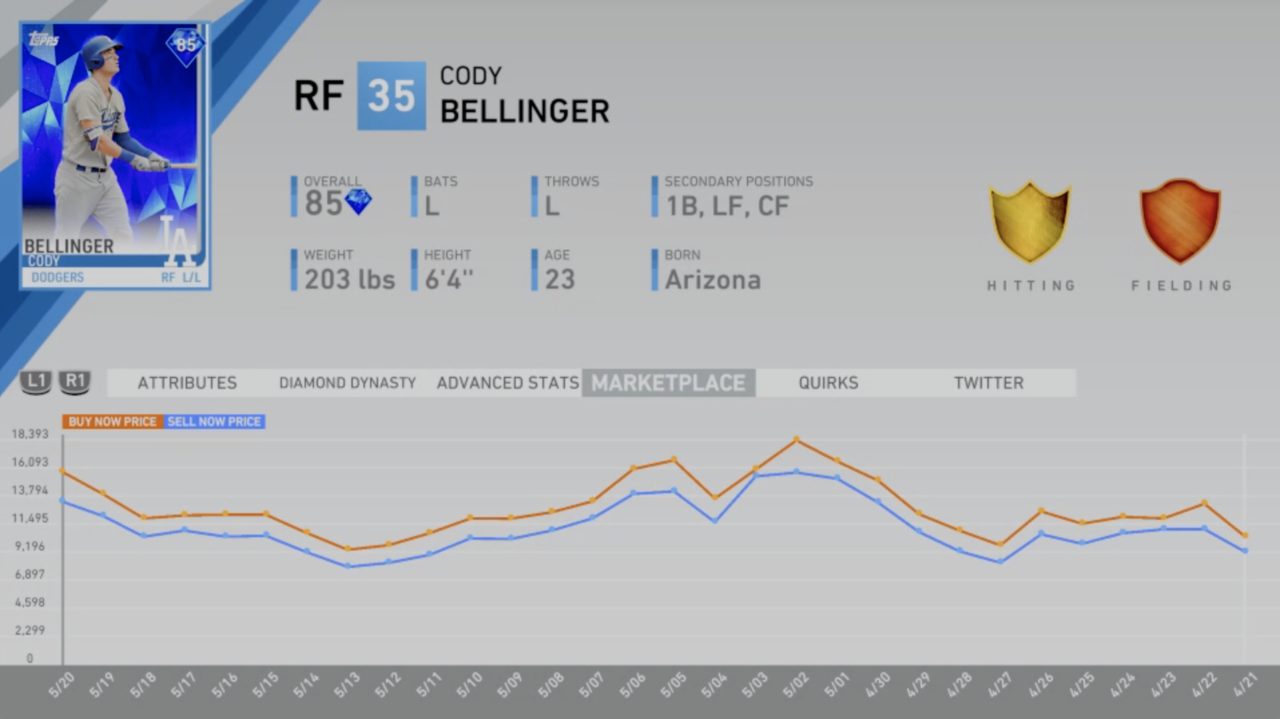 For anyone new to MLB The Show and Diamond Dynasty, the community market can be a daunting enigma. How is someone supposed to afford a card worth 150,000 stubs? Folks surely aren’t pulling so many diamonds in packs that they have those kinds of funds to spend, right? Or is it that people are spending real cash in order to secure some of their favorite cards?

Well, some people are that lucky and others are spending real money, but the best way to make stubs in The Show is to flip cards in the community market — and it’s easier than you think.

In essence, there are five ways to quickly make stubs in MLB The Show. Let’s take a look at the ins and outs of striking when the iron’s hot.

One of the most familiar and popular options for individuals looking to make stubs is investing in players that are likely to be bumped up a tier at the next roster update. In short, as an example, you would buy a gold Ronald Acuña Jr. for roughly 5,000-6,000 stubs in the hopes he goes diamond in the next update. At that time, you can either quick sell that diamond for 5,000 stubs, or usually the more lucrative option would be to use the sell now option and, in this scenario, probably make 10,000-plus stubs. That’s a profit of 5,000 stubs on one card. Now imagine you have 10 or more of those cards to sell. All of the sudden you’ve profited 50,000 stubs and a lot of cards you thought were out of reach are now well within your grasp.

This works at all tiers. The 10 Acuña Jr. cards is an elite example as it assumes the buyer has 50,000 stubs to spend in the first place. Most people just don’t have that. But in time, anyone can get there with patience.

Flipping silver cards in the hopes they go gold in a roster update is a much more accessible route for some. If you invest 4,000 stubs on 10 silver Josh Reddick cards (hitting .324 at the time of this article), you can quick sell every one of those cards for 1,000 stubs if/when he goes gold. Moreover, you may be able to place sell orders on those cards and make an additional 500 stubs or so. In this example, you’ve made anywhere between 12,000 and 15,000 stubs on a 4,000-stub investment. That’s a profit of almost 10,000 stubs.

One final thought on this practice is to be sure to make your investments several days prior to the roster update. Roster updates take place every other Friday, and by Wednesday of that week prices for cards presumed to be getting upgrades are generally extremely inflated. In some cases, that inflation can take place even a week or more ahead of time (as is taking place with someone like Josh Bell right now, for example).

With that in mind, cards that will presumably be getting upgrades in the next update will always be inflated within 48 hours of that upgrade. The thing is, those upgrades are not a guarantee. Let’s use Acuña Jr. in this example once again.

As I stated last week, Acuña Jr. going diamond is a foregone conclusion. It’s not if, it’s when. Because of that, his stock price absolutely exploded toward the end of last week, ballooning to almost 9,000 stubs per transaction the Thursday prior to the update. Well, he didn’t go diamond, so a lot of those investments were for naught — at least for now.

The fact of that matter is when Acuña Jr. goes diamond, he’ll likely sell for 10,000 to 12,000 stubs on a regular basis. Here’s where the tactics come in. Instead of waiting for him to go diamond, just sell him to the hoards to folks looking to capitalize that Thursday night. You’ll make marginally less stubs than you would if you wait until he goes diamond, but when will that be? A week? A month? Three months? Strike while the iron is hot. That’s still a profit of 4,000 stubs per card.

But when should you buy Acuña in the first place? 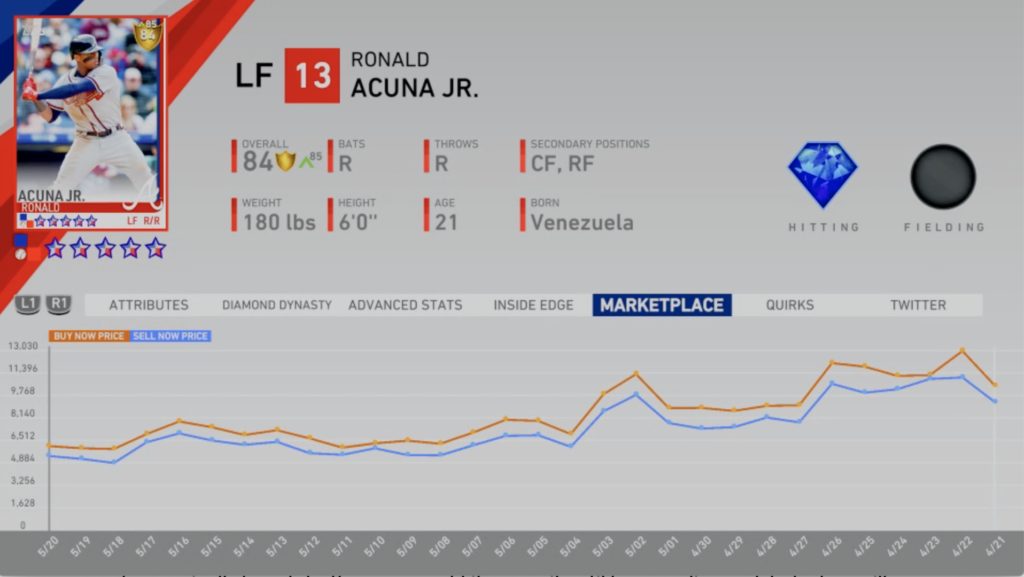 Capitalizing on buying cards at their lowest point is critical to making the biggest profits possible. When Acuña didn’t go diamond this week, all of those folks who had invested thousands and thousands of stubs were out of luck. As a response, many decided to go into full sell mode to try and recoup as many stubs as they could from the week before.

This is when you swoop in to buy them up.

At 11 a.m. PST last Friday, an hour prior to the roster update, Acuña Jr. was selling for 9,500 stubs. 90 minutes later, you could get your hands on his cards for 3,600 stubs. A complete collapse in value. But this is where patience pays.

Buying Acuña during this collapse is the perfect time to stockpile. The same inflation is bound to happen two weeks later at the next roster update. So buy as many gold-to-diamond *misses* as you can immediately handle after roster updates. You’ll be able to flip them for enormous gains two weeks later. Again, patience pays.

When San Diego Studio announced that most cards will be sellable in MLB The Show 19, it opened up a whole new market for making stubs. If you’re someone who has time to grind, you can truly make hundreds of thousands of stubs with 24 hours or so if you are dedicated enough.

It’s essentially a race to 300 program stars for each of these new Inning Programs San Diego Studio releases. We’ll use the third inning in this example. 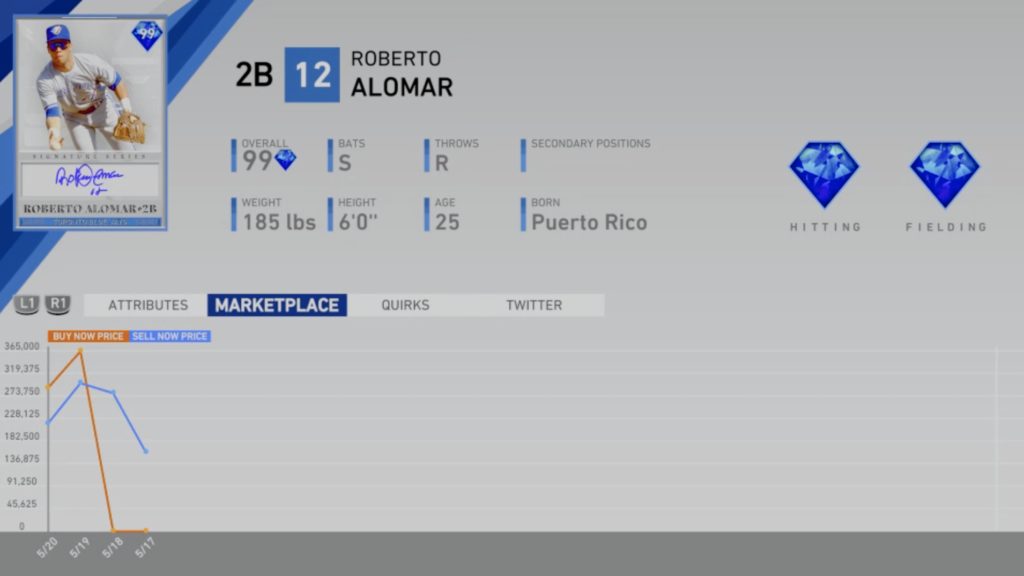 In the first 24 hours after the program launch, If you complete all of the new Moments, the new Conquest map, win 10 Ranked Seasons, Battle Royale, or Events games, as well as redeem the third inning voucher, you’ll already be at roughly 240 program stars. From there it’s a grind. You’ll have to play roughly 20 games against the CPU to reach 300 program stars. So yes, you can reach 300 program stars in less than 24 hours if you have a grinding mentality.

The real reward is immediately selling your program reward, essentially being one of the first to the market. Roberto Alomar, Justin Verlander and Rickey Henderson were all going for roughly 350,000 stubs when the first few cards hit the market — and people were willing to pay.

If you want to make a truly enormous amount of stubs over the course of one day, this is your best route.

The fifth and final way to stack up stubs is a little more tedious, but just as effective. I personally know folks who have become stub millionaires this way, it’s just more time consuming. The idea is simple. Buy cards using the buy order function and sell those cards with the sell order function for marginal gains. The trick is the 10 percent rule.

When you sell a card, you only receive 90 percent of the total revenue. The other ten percent goes to the market. There’s some math involved here, but nothing too complex.

At time of writing this, the April’s Finest Austin Meadows card had a sell now price of 6,000 stubs and a buy now price of 6,975. So the technique is simple. You buy the card for 6,001 stubs and then place a sell order for 6,974. The market will keep ten percent of your profits, 698 stubs, but you will have made a profit of 276 stubs in the two transactions. 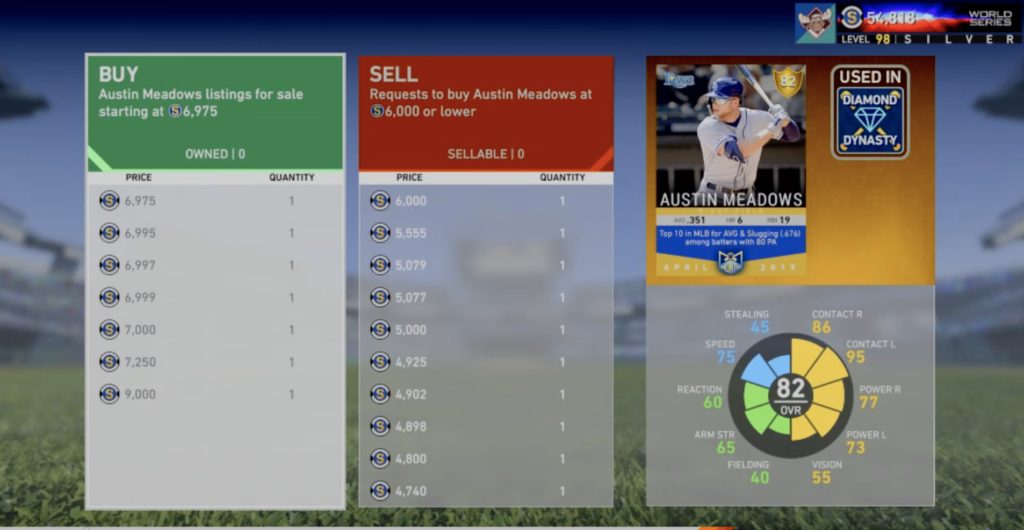 The returns are marginalized, but you can do these anytime, anywhere and in giant quantities. The entire community market is available at TheShowNation.com, so flipping cards at work is totally feasible, although I’d never *cough cough* promote such an idea.

As shown, there’s a ton of different ways to stack up stubs on MLB The Show, it just takes some maneuvering and patience. It’s not unrealistic to make over 100,000 stubs in a couple weeks if you employ these tactics. Give it a shot. Your digital wallet and Diamond Dynasty team will thank you for it.