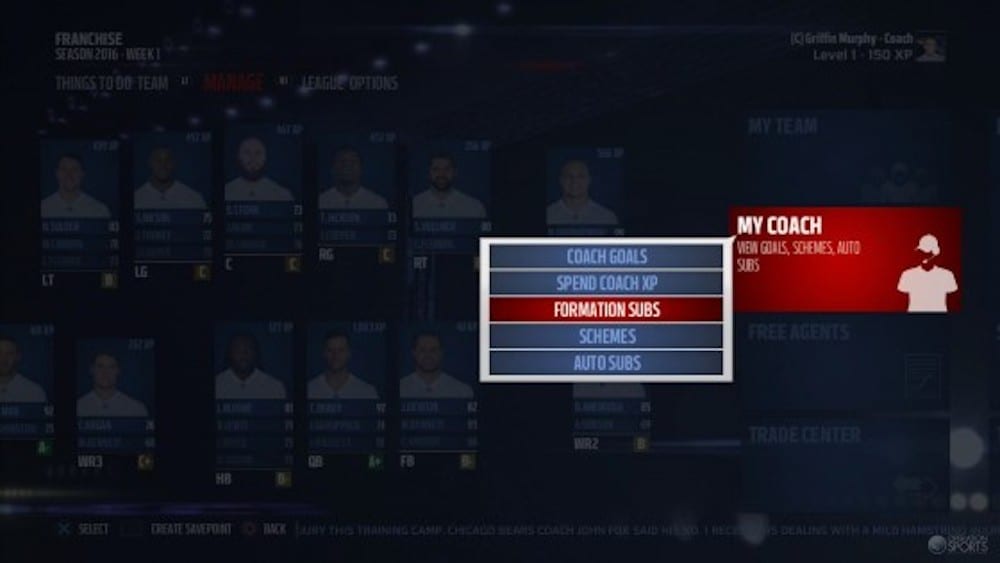 Madden NFL 17 Associate Game Designer, Ryan “RG” Glick and the Madden team have sent us this exclusive blog covering the return of formation subs. Make sure to read it and post your thoughts.

Madden has had its fair share of features come and go over its 27 year history.  One beloved Madden & NCAA feature that sadly was lost in the Gen 4 console transition was the ability to save formation specific substitution packages.  Now in Madden NFL 17 it gives me great joy to announce the return of formation substitutions within franchise mode.

Before explaining how formation subs will work in Madden NFL 17, I want to say THANK You to our community because you truly were the ones who really drove this feature into Madden NFL 17.

Now for a little back story about formation subs. It was originally a feature that was “out of scope” for Madden NFL 17 (meaning it was not scheduled to make it into the game).  That was until myself and the Madden NFL development team started to take note of all the support the feature was getting from the community.  All of your  and the GameChangers tweets, forum posts, wish lists, and feedback helped the team here at Tiburon know that this was a must have feature if we were serious about making significant changes to improving Franchise mode.  This was the type of feedback that made doing whatever work necessary to get this feature into Madden NFL 17.

We are excited because the addition of formation subs is an example of our passionate community’s coming together to get a feature into the game.  So to all of you vocal Madden fans out there, please keep up the good work and continue to deliver feedback as you can make tremendous impact on the game.

Now let’s talk about how the feature actually works. For those that are not familiar with formation subs, a quick high-level definition is that players now have the ability to set & save starters in specific positions based on formation regardless of how the players are sorted in the depth chart. Once in Franchise mode, the mechanic works as such: Some additional things to keep in mind when using the feature are:

The list of eligible players who can be subbed in at each position from the formation sub menu is:

Again, Thank You to the entire Madden Community for your constructive feedback year in and year out.  We look forward to watching you all continue to use your passion to make Madden the best it possibly can be.