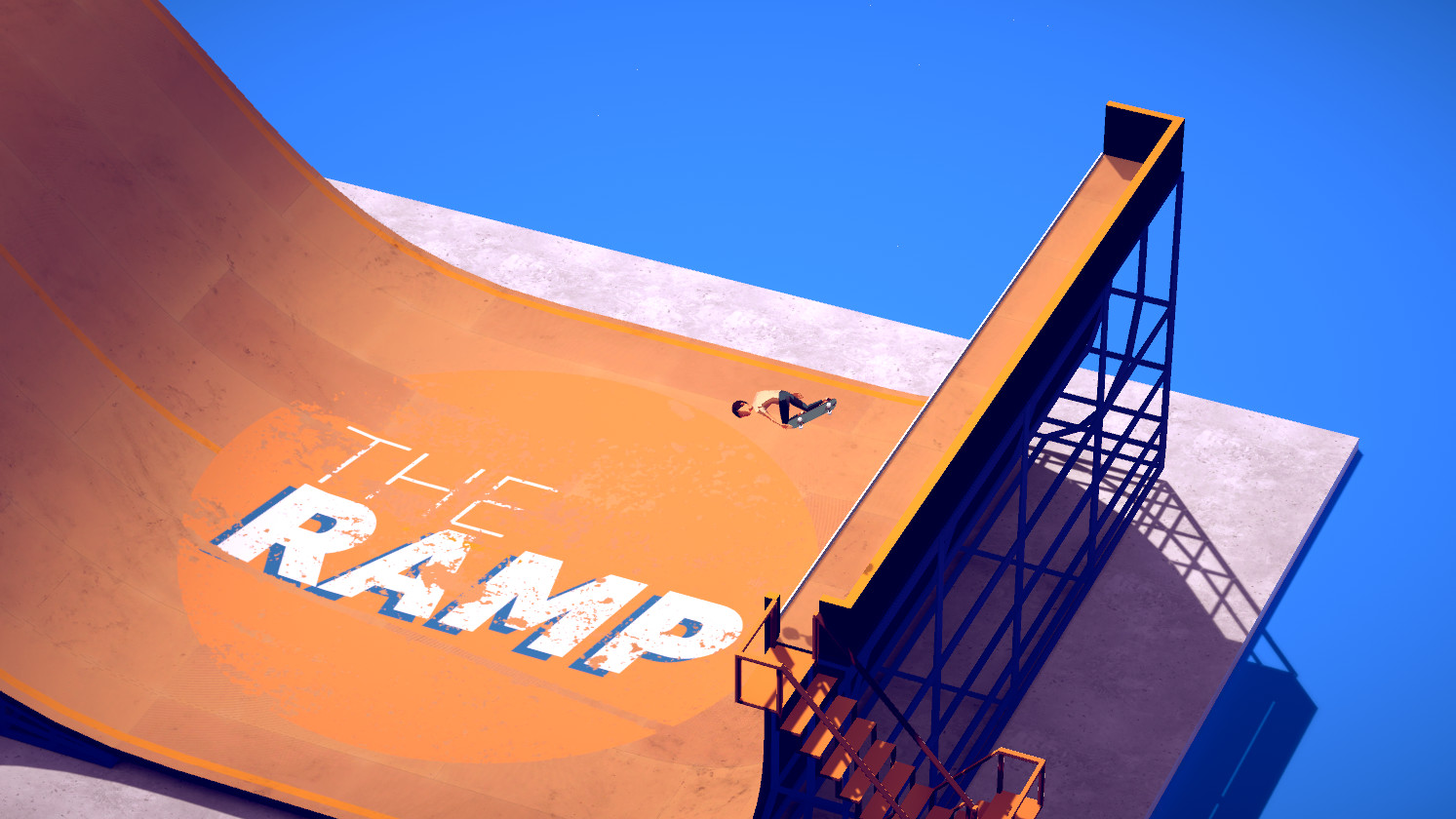 Skateboarding video games continue to release every day (or so it seems), so one of two things need to happen for a new game to really get noticed.

Hyperparadise’s The Ramp would fall under both categories. It is a unique game based solely around the art of vert skateboarding — more on that later — but it’s also reasonably priced at roughly $6 USD. Here’s what the game’s official Steam page says about The Ramp, which doesn’t even refer to it as a video game.

Like the developers suggest, I think it’s fair to say it’s closer to a toy than a video game. Nevertheless, for a game that seems so simple on the surface, I was eager to dive in and see how it fares against some of the other games on the market. So let’s jump into my review of The Ramp. 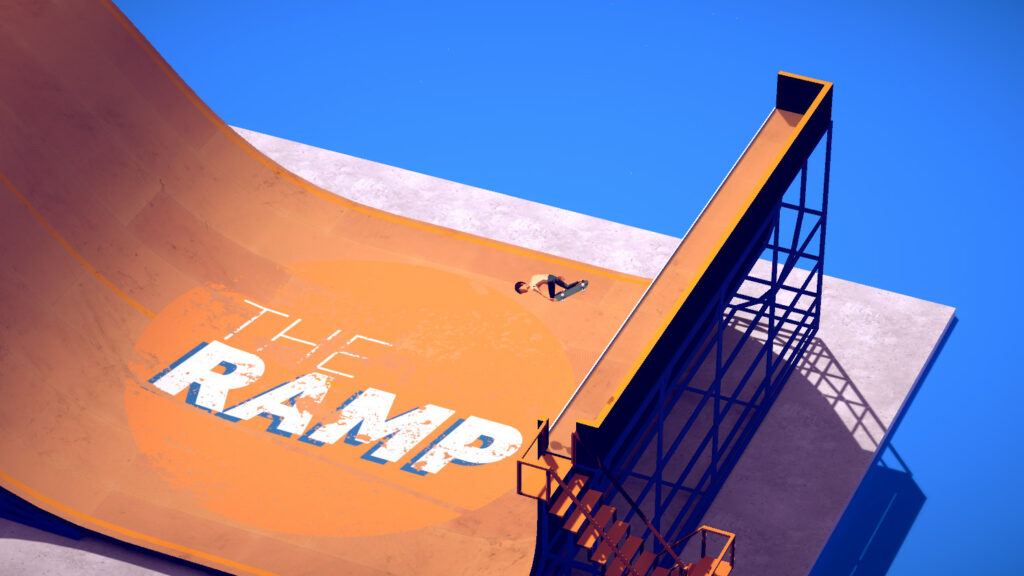 Fun And Pays Homage To The Art Of Vert-Skating

As I mentioned above, the gameplay is based solely on vert-skating, with the core gameplay focused around “pumping” up and down to gain speed and momentum. Here is what Wikipedia describes as the art of pumping.

Pumping is a skateboarding technique used to accelerate without the rider’s feet leaving the board. Pumping can be done by turning or on a transition, like a ramp or quarter pipe. When applied to longboards, it is also known as Long distance skateboard pumping or LDP. Pumping is a technique similar to pumping a surfboard.

To do this, skaters must hold and release the A/X button at specific times to gain friction. Below is an image that might help better explain: 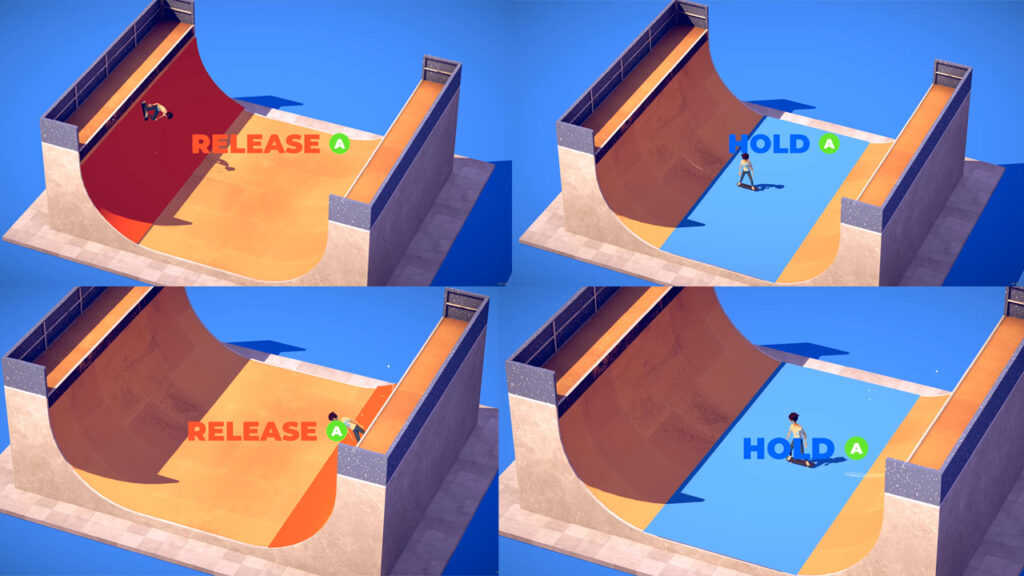 This technique may take time to truly master, but once you do, it becomes second nature. And to be honest, it’s something I’d like to see implemented in more skateboarding video games. Perhaps we get to see more of this in Skate 4? My point is Hyperparidse does it very well, and it’s something I think future skateboarding video games may want to mimic.

After you master the art of pumping, you can now move on to adding spins, twists, and grabs to your arsenal of tricks. Grabs can be performed by using the right trigger. Spinning can be done by moving the left trigger accordingly. There is a rather deep arsenal of tricks at your disposal as well. This consists of just about any grab under the sun, and obviously you can spin as much as gravity allows.

The characters in the game are generic but there are a handful you can select — with the noticeable difference being skin color and hair length. However, it is The Ramp‘s levels that keep the game refreshing.

Four Levels, Each With Its Own Purpose

For those looking for a bunch of authentic skate spots, please let me once again bring up the $6 price tag and the one-person development studio. Yes, it would have been nice. And yes, maybe that’s something we see in the future, but this isn’t something I would expect in a self-proclaimed toy.

For now, there are four levels: a mini-ramp, a mega-ramp, a big pool, and a modified double pool. If there are specific names for these levels, I apologize in advance. Each level, albeit small and simple, gives players more than enough to want to keep coming back again and again to try different lines and tricks. 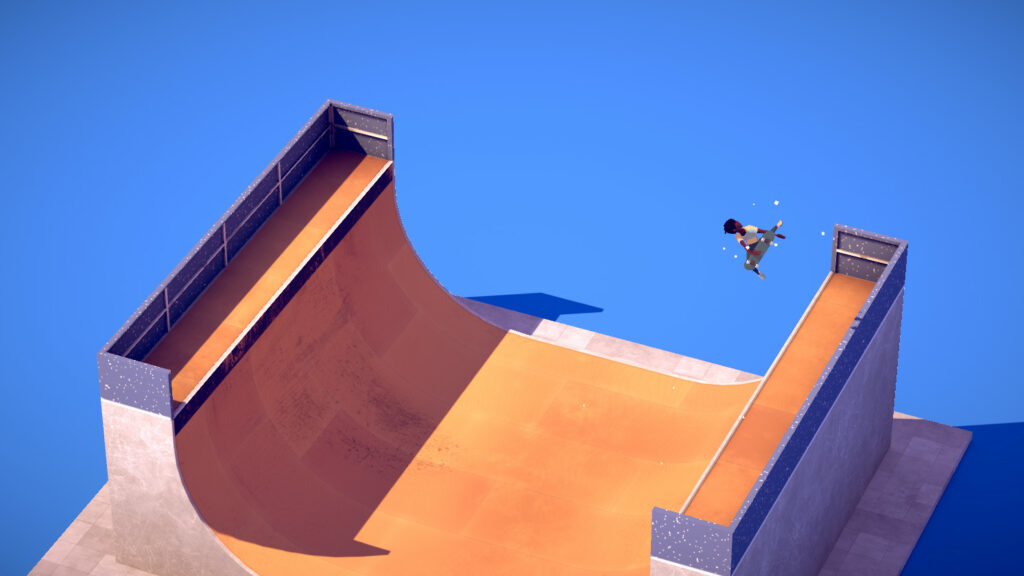 For what the game is, I feel like each level has its own unique purpose. For example, the halfpipe is a good place to try to string together a run of tricks. It’s also a good time to get comfortable with the controls. Unfortunately, besides maybe flying off the side of the halfpipe and obviously not landing your trick, there’s not much difficulty to the level — or game. Of course, you can turn the difficulty up, but the only difference I noticed may be physics-based. 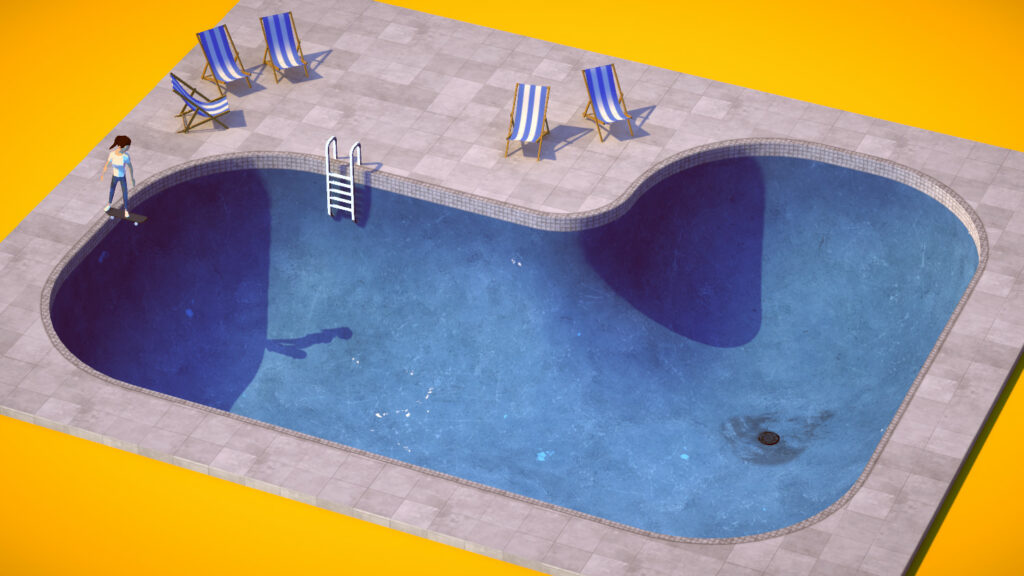 If I had to choose, I’d say my favorite level is the pool. Not only are you able to get some real speed, but it also has a ladder that you can air out over or smash into if you’re not too careful. Overall, this level has been the one I’ve found myself wasting the most hours on. Maybe it’s the insane speed you can get by pumping back and forth, or maybe this is what I consider to be the best representation of vert-skating. 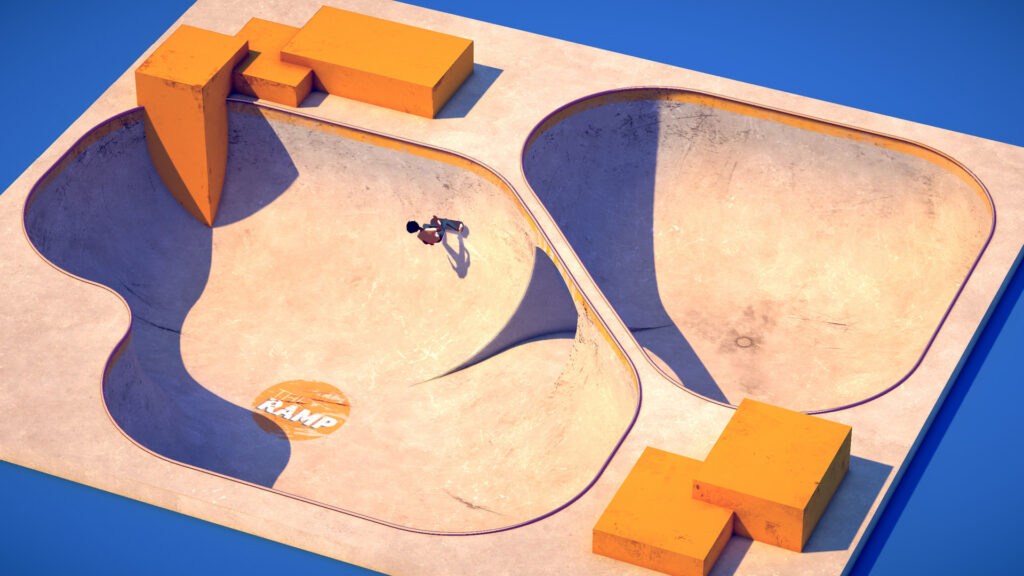 If you want to take it one step further than a traditional pool, you’re in luck. The third level is what I have referred to as a double bowl, but a unique part of this level is the little underpass that allows you to cross from one pool to the other. It also gives gamers a gap to try to clear. This level has been the one where it’s hardest for me to stay on my board. The truth is, I normally find myself smashing into the corner orange square or crashing into the side trying to go underneath to the smaller bowl. 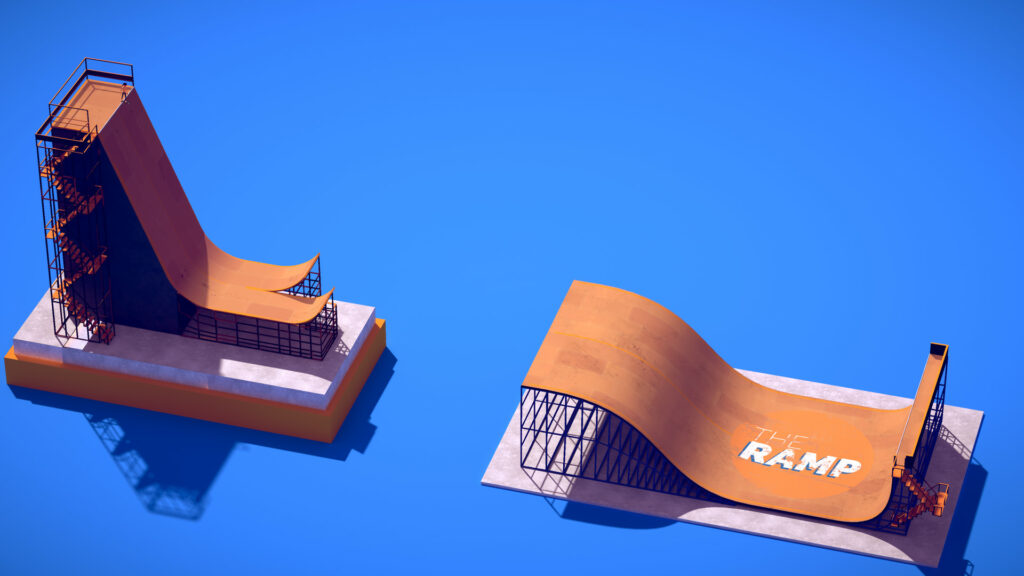 The fourth and final level is a mega ramp, which I predict will probably be a fan favorite. This is, after all, the easiest way to get insane air, and maybe it’s just me, but the few bails I’ve had that have been noteworthy have all come while either trying to clear the monster gap (it can be not good), or by trying to hit the quarter pipe at the end — I’ve done 1260s that resulted in hitting the concrete. Not good.

To knock a game that calls itself a toy for not having a story mode or other key aspects of a video game seems redundant. Nevertheless, that really is the biggest issue I have with The Ramp. The gameplay is fun, the levels are unique, but besides a few achievements and your own personal goals, there’s not much to keep me coming back for more.

I don’t think this game needs a “story mode” but maybe an online leaderboard would allow players to compare their stats with fellow skaters, keeping them coming back again and again to compete with their friends all around the world.

Unfortunately, there are no flip tricks in the game. I think this is a big miss. However, it does leave room for the game to grow and expand. But for now, you will not be able to pull off a Kickflip McTwist or various other tricks. Not having flip tricks in a skateboarding game is odd, but I’m sure this is easy for me to say not being a video game developer, creator, or anything of the sort.

But yes, I think they should be implemented, and I hope that we eventually get to see flip tricks in a later installment/update. Adding flip tricks would expand players’ moves and ultimately help in the replay factor department — my biggest gripe with this arcade skateboarding video game.

Overall, The Ramp felt like a much more simplistic (very simplistic) version of OlliOlli. There is no story, but for the $6 price tag, it’s probably worth getting if you’re a skateboard fan or just looking for a new challenge. The Ramp pays homage to the art of vert-skateboarding by not being too difficult to learn. Sure, it is much closer to a toy than a game, and there’s plenty of room for new additions in the future. But what this single developer was able to accomplish is well worth the price of admission, and it should become a nice arcade alternative for skateboarders everywhere.

(We just wish it were available on mobile devices!)

Cancel reply
Comment on this article
Continue Reading
You may also like...
Related Topics:hyperpardise, Review, skateboaring, spotlight, the ramp