It is no secret the PGA license has been up for grabs ever since EA officially canceled its golf title a few months ago. While it wasn’t an exclusive agreement, most would agree that in today’s market, there probably isn’t a need for two simulation-based PGA licensed games. This is where HB Studios comes into play as the studio has begun a relationship with the PGA that allows users to now play a PGA-style career; play on PGA-sanctioned TPC courses, and more. While many fans were aware of this, even more had questions about what avenues this possibly could open up down the road. Luckily, we were able to spend some time with the developers and try to answer those exact questions.

Operation Sports: How long has HBS been trying to secure the PGA license? And how difficult was the process?

HB Studios: We’ve had an excellent long-term relationship with the PGA Tour’s representatives for many years because they also represent other organizations and brands. So part-way through this version of the game, we reached out to them and it went from there. The overall process was relatively quick and smooth. It helped because we already had a well-respected, well-reviewed game in the public domain so it was easy to demonstrate what we have and where we wanted to go.

OS: The community is aware that six TPC courses will be included at launch, with the possibility of more as DLC. In a perfect scenario, how many official courses will there be available in the game when all the DLC is made available?

HBS: We have one course coming for sure that we’re very excited to be including. Outside of that, we are continuing to outline the post-launch content, whether it’s more courses or licensed apparel, or both. 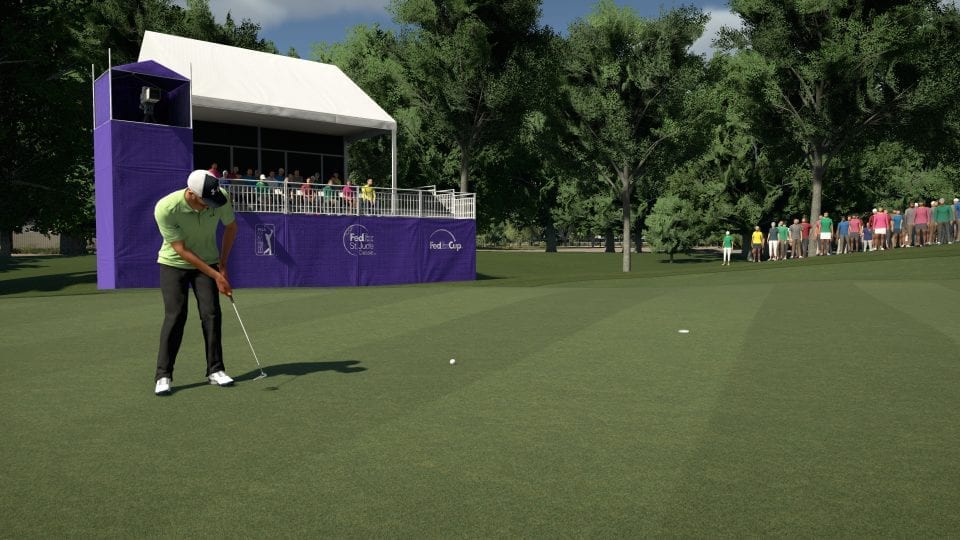 OS: What was the process and how difficult was it to re-create the official courses? And did upgrading to new Unity engine help the process?

HBS: It was a long process that spread across many different departments. The PGA Tour was very helpful in getting us started by providing topographical data for each of the TPC courses. This allowed us to import that data at 90cm resolution, and have a highly authentic terrain when comparing it to the real-world courses. From there we used the same course design tools that will be available in the game at release to build the layout of each course. While this was happening, we also had a team working on re-creating some of the bespoke items that would show up on each of these courses. This includes but isn’t limited to grand stands, retaining walls, trees, bushes, grass, club houses, the list goes on. In the end, everything was put together after a ton of effort that we’re excited to get in the community’s hands.

OS: Building off of that last question, will course creators have access to the PGA assets when creating their own courses?

HBS: Not at launch, however, we are discussing what we can put into an asset pack post-launch for DLC. 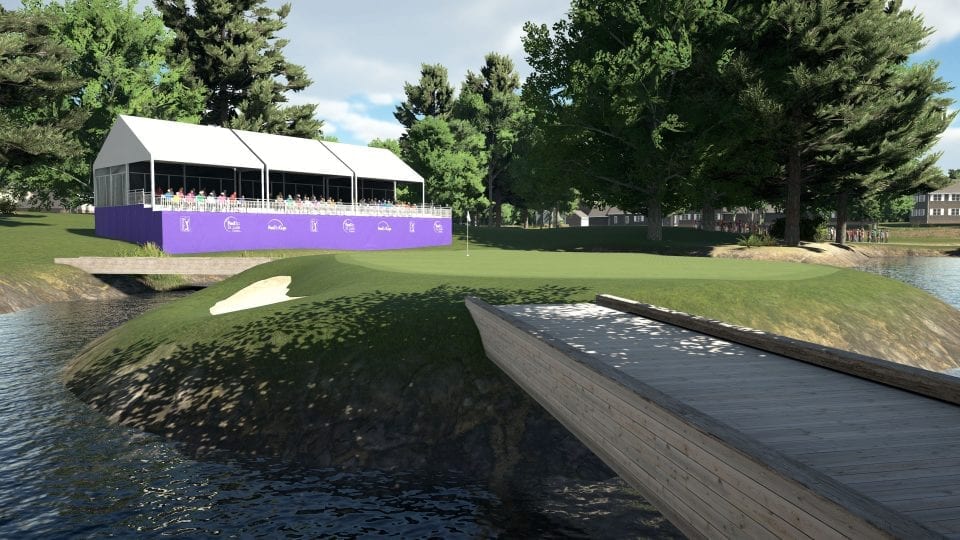 OS: At this juncture there are no licensed PGA golfers in TGC ‘19, but during career mode will the last names be properly represented on weekly scoreboards, seasonal standings and stats?

HBS: The user’s opponents throughout the PGA Tour Career will be generic names and faces that they will compete against. As in past The Golf Club games, details about the CPU opponents are user-editable. On the topic of players, it’s definitely something we’re pursuing as we continue to push the franchise forward.

OS: Could you go into greater detail how career mode works this year, what it entails, and also how it might impact Online Societies?

HBS: At the moment the PGA Tour Career Mode is all about the player. You begin your career in Q-School, work your way through the Web.com Tour on the road to obtaining your PGA Tour Card. Once you reach the PGA Tour and throughout the path there, you will manage sponsorship goals with the likes of Tattoo Golf, Under Armour, and more. All while meeting CPU Rivals along the way for head-to-head competition, challenging you for that top spot on the leaderboards and the race to the FedEx Cup Playoffs. To compete with other users, Online Societies still provides a great way to play a structured season of custom golf tournaments with your friends, or the larger TGC community. Some great new additions to the PGA Tour Mode have even made their way to Online Societies, such as event requirements, alternate events and the all-new menus.”

OS: How involved were the course GMs and architects in helping to re-create the official TPC courses?

HBS: They provided a lot of helpful data from the top to photo reference around the courses. The actual building of each course was done in-house, but they also reviewed each one providing additional feedback and sign off.

OS: It’s been rumored that there will be no TGC ‘20, if true, can you give the community an idea of what the future might hold, both in terms of future DLC and the PGA license?

HBS: We are planning to provide support for DLC and updates post-launch. There will be more information about this once the game has been released. We have not ruled out a TGC ’20. We are building out a long-term road map for the game and we have to consider new models like service-based games, potential new hardware, other platforms, and so on. Once we release this year’s game and hear user feedback, we can sit down with the PGA Tour and look at it more closely.” 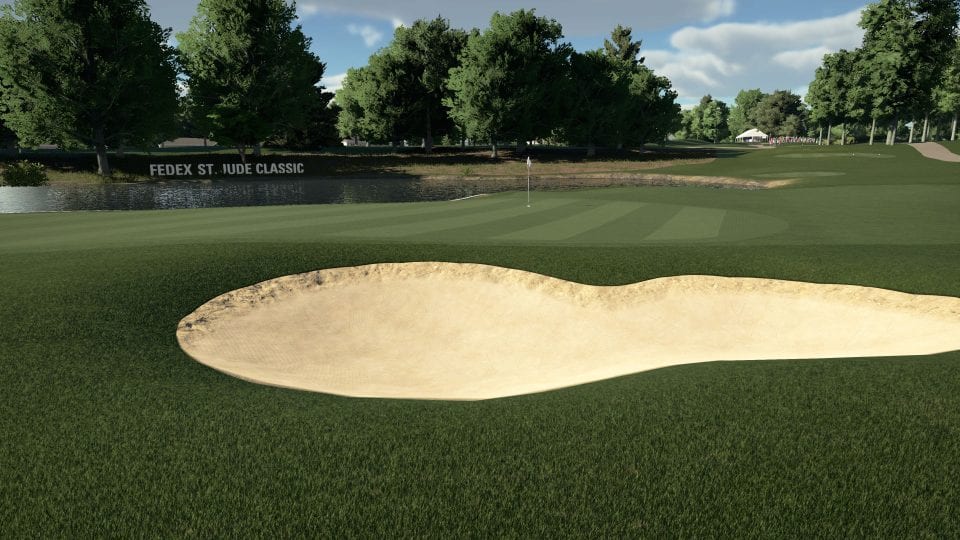 OS: Tough question, but do you foresee a day when this title might be referred to as TGC: the official golf game of the PGA?

HBS: That’s the end goal for everyone. For this iteration, we really wanted to focus on the featuring of the PGA Tour in its own mode. That’s not to say that the rest of the game won’t benefit from the license as well. TPC courses will be available throughout the other modes of the game but without the event branding that’s tied to them.

OS: Why the decision to only pursue TPC courses (although some wonderful courses) and no other courses that are currently featured on the PGA Tour?

HBS: The relationship gave us immediate access to the TPC courses. All six of the TPC courses are amazing to have in the game. That said, TPC Sawgrass and TPC Scottsdale are also two of the best and most iconic courses around. We definitely want to bring more courses on board, not just TPC ones, but this felt like as good a spot as any for 2019.

OS: Will the TPC courses be branded correctly, or listed only by the actual name of the course? Example: Will the tournament at TPC Scottsdale be referred to as the Waste Management Phoenix Open?

HBS: All of the TPC courses will be branded with their events they are associated with in the PGA Tour Career Mode. (e.g. Waste Management Phoenix Open, THE PLAYERS Championship, etc.) In each event, you will recognize everything from the grandstands, tee markers, and yardage signs, down to the ball washers and waste bins. Outside of this, you will see the everyday courses without the tournament dressings when playing locally or online.

OS: Have you had other course GMs contacting you about having their course in the game since the announcement of the TPC courses being officially in the game?

HBS: We are in contact with several courses with an opportunity to add them to the game. Now it’s down to time and where they can fit into the schedule.

As you can see, the PGA is a huge focus in TGC ’19, and rightfully so. Although there are still plenty of ways to enjoy the title without immersing oneself in the PGA career, the PGA license is an absolutely integral part of the game, as it should be. What’s even more exciting is the groundwork that is being laid for future iterations — all while allowing the user to fully enjoy what is available now, and for most, that is a winning combination.