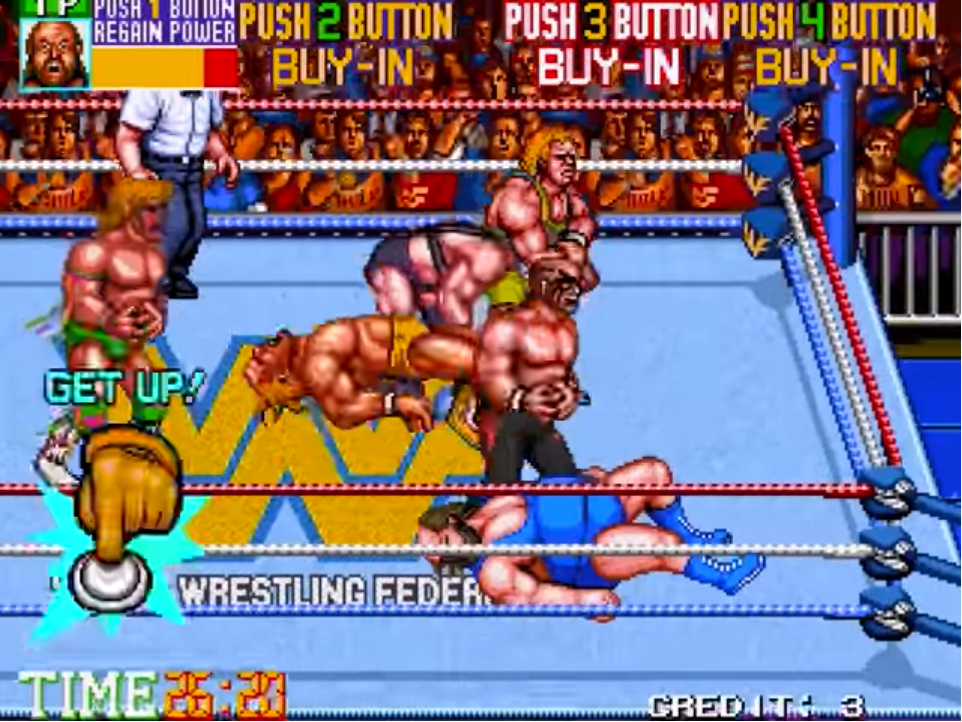 The video-game landscape has gone through such a dramatic transformation from when I started to play games as a child to where we are today. I can only imagine where they will be in five or so years when my son is old enough to take over as the Player 2 to my Player 1.

Back in my day…after you finally saved enough money to buy a game yourself, that was it! The game was yours and the transaction was complete. Now? We’re just getting started, baby! Instead of playing for hours to level up your character or unlock new ones, now you have to enter your PayPal information.

In A Way, Arcades Of Yesterday Are Microtransactions Of Today

But when you think about it, in an admittedly very roundabout way, arcades — the children’s version of Las Vegas —  were the first attempt with this philosophy. However, I can’t imagine that arcade operators of the ’80s and ’90s were doing so under the assumption that they were shepherding the video game industry into another era.

The Venn diagram of video game fans and arcade fans no doubt had significant overlap, but the arcade was more of a destination than the full-time activity console gaming became. The actual game playing took a backseat the pageantry of “I’m so excited to go the arcade!”

But instead of paying a flat admission to this activity, it was strictly pay-to-play. It’s not a perfect comparison to microtransactions by any means, but even as a kid back then, I was ravenous about inserting quarter after quarter after quarter into those machines. What the total showed on the balance sheet at the end of the night was irrelevant.

In that sense, we were primed at a young age to pay not just 25 cents to play The Simpsons Arcade Game. No, that was just the ticket to get into the show. Maybe the show would last for 20 minutes. Or maybe it was just 20 seconds. Regardless, when that death counter clicks on and the number five explodes to reveal the number four, you know you have just four seconds to fumble around in your pocket for those extra two quarters you swore were there just a few seconds ago.

Which Brings Us To WWF Superstars and WrestleFest

No other arcade games received more quarters from me than WWF Superstars and WWF WrestleFest. My earliest memories of entertainment consumption include heavy doses of wrestling. I was in awe of the characters on my television screen at home, which translated to a similar fascination at arcades across Detroit. The pageantry of pro wrestling combined with the glitz and glamour of an arcade created a powerful concoction that demanded a full plastic bucket of quarters at all times. It certainly didn’t hurt that the overly-cartoonish artwork style was absolutely pitch perfect for the game and the era in which it existed.

Both WWF Superstars and WWF WrestleFest were remarkably similar in terms of gameplay. And judging by today’s standards, gameplay was mind-numbingly simplistic, but it was the norm for sports games during that era. And it worked. You could walk, strike and perform one of two grapple moves. That’s basically it, with some basic running strikes, top-rope maneuvers and finishers thrown into the mix. Instead of move lists that spanned dozens and dozens of rows in WWE 2K or Fire Pro, each wrestler in these games had maybe 10 total moves.

But the game never felt overly simplistic. This was not just due to the era, but also, ironically, due to the mode limitations. Neither game allowed you to have a singles match. Having multiple wrestlers involved at all times, breaking up pins and whatnot, certainly led to a lot more chaos than you would have otherwise seen during a singles match. In fact, for Superstars, tag team wrestling was it. You picked two wrestlers to take into battle. Beat the first three teams and then you face off against Andre the Giant and Ted DiBiase for the belts.

Andre’s overhand slap with that catcher’s mitt he called a hand always seemed to drain your entire energy bar. He was a true final boss. But if you managed to overcome those odds and win the belts, you got four more matches — the fourth again against Andre and DiBiase — before the game ended. 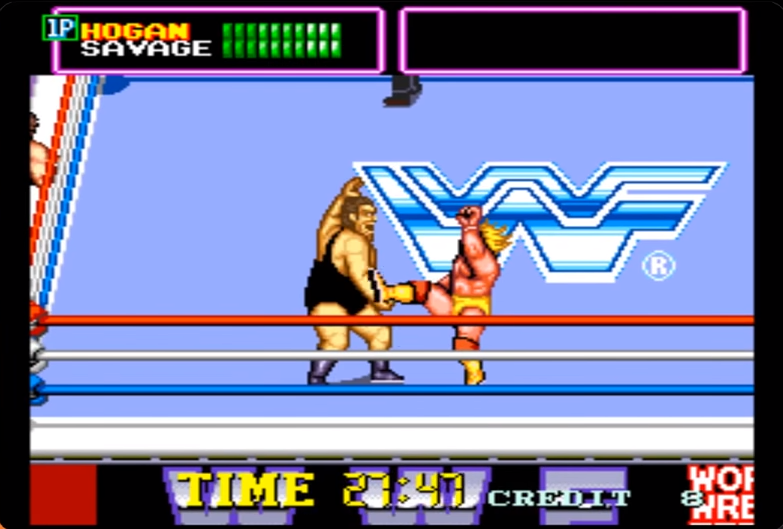 WrestleFest Was The Next Evolution For Arcade Wrestling

When WrestleFest made its debut, we were greeted with bigger, more detailed wrestlers, some more moves and even a new mode: the Royal Rumble. With WrestleFest, it was unfortunately the Rumble in name only. The screen had a six-character limit, which was not a big deal at the time. But instead of eliminating your opponent by throwing them over the top rope, in WrestleFest it required a pinfall or submission. It was a weird quirk that pushed me to mainly play tag team matches.

The tag team mode in WrestleFest was very similar to Superstars. The concept was the same, but instead of having to win three matches before the title match, you now had to win four, with the third inexplicably fought inside of a steel cage, which existed for aesthetic purposes only. Instead of facing off against DiBiase and Andre, the champs here were the Legion of Doom, Hawk and Animal. If you won the belts, you could win three more matches before the game was over.

One of my favorite things about WrestleFest were the ridiculous post-match animation for the losing team. As soon as the ref’s hand counted three, the losing team would stand up and put their hand over their face in embarrassment that they lost. I’m not sure why I still enjoy this so much. Maybe it’s just the nostalgia, or maybe it’s the absurdity of that happening on WWE TV. I would love to see the Usos shoot right up after losing a match and then stand completely still with their hands over their faces. 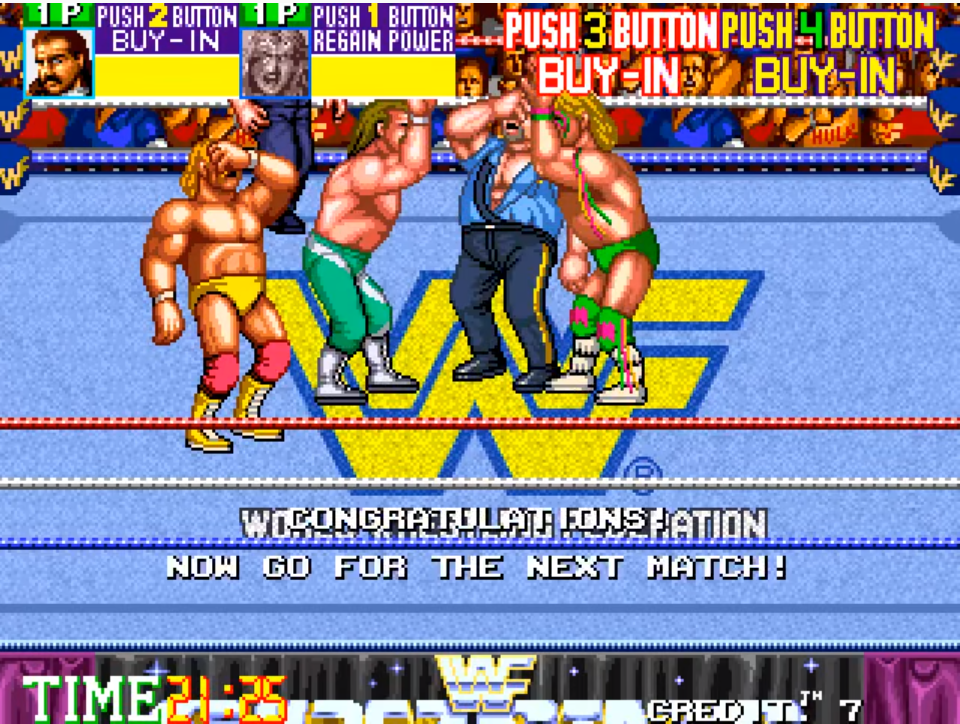 The grapple animation is also iconic. Go in for a grapple, and then your wrestler goes for a collar-and-elbow tie up, which always looked like a blatant choke to me when I played this as a kid. You could always spot a reversal coming as well because your wrestler would go for the tie up. However, instead of then hitting your move, your opponent would immediately go to tie you up once, then a second time, and then hit their move. And if you’re anything like me, this always happened right as you were about to tag out for a much needed breather.

For the YouTube expert in 2020, it all sounds so simple. But for 8-year-old Brandon, getting through even two matches required more quarters than I had and, more specifically, more quarters than my parents were willing to donate to the cause. The only time I got to see the title match — never mind the title defense — was the same way I viewed it a few days ago: as a spectator.

In watching playthrough videos in my mid-30s, the simplicity of the winning strategy is clear. Decades ago, I felt helpless. I’d usually land a few good strikes and a grapple move or two, but then the computer would eventually overpower me and slam or suplex me to death. Even if I were able to scramble to my corner, I remember always fumbling with the buttons as I unsuccessfully attempted a simple tag out to my fresh partner. The fact that health did not completely regenerate between matches was anything but helpful.

The franchise made a brief comeback attempt with an iOS release a few years ago, along with some DLC. Console versions were planned, but those were eventually scrapped and even the iOS app quietly went away. It featured an updated, yet familiar look, more match types, and a mix of current and former superstars. It was a lot of fun and I’m still not sure why it went away so quickly and suddenly.

The people over at Retrosoft Studios apparently agree with me as they acquired licensing rights to the franchise last year and are currently working on a title that is due to release early this year on PS4, Xbox, Switch and PC. You can check out their official YouTube channel for some gameplay videos, but much like the iOS version a few years ago, it looks both different and similar. The biggest, most glaring difference is the lack of a WWE license, which means it will feature independent wrestlers.

All in all, I suppose it’s appropriate, given how bad I was at the game as a kid, that the only way for me to experience the game now is through YouTube videos (aside from emulators, of course). It’s not the same as standing at the side of the machine, watching as an older teenager plows through dozens of quarters to beat the game. Still, the nostalgia is nice, if even for a moment.