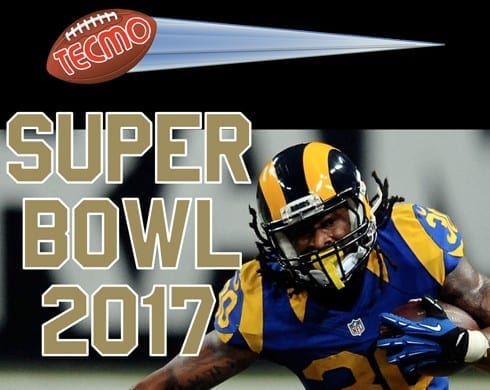 Tecmo Super Bowl 2017 is available now. Click here to get the details on how to get it up and running.

Tecmo Super Bowl is the greatest sports video game of all time. Now, 25 years after TSB made 8-Bit legends of Bo Jackson and Lawrence Taylor, TecmoBowl.org proudly announces the release of Tecmo Super Bowl 2017. This site’s 10th yearly iteration updates Tecmo’s NES classic with up-to-date rosters, graphics, schedules and play books for all 32 NFL squads. Additionally, you can now check the defensive conditions of your players. Playable on multiple platforms and operating systems via NES emulation software, Tecmo Super Bowl 2016 brings Nintendo’s bone-crunching classic to today’s computers and handheld devices. Will offenses fear Von Miller like they feared Lawrence Taylor? Who is the more deadly play-caller: Aaron Rodgers or Dan Marino? Will Todd Gurley live up to the hype? Loaded into an NES Emulator, Tecmo Super Bowl 2017 will make legends for the next 25 years.