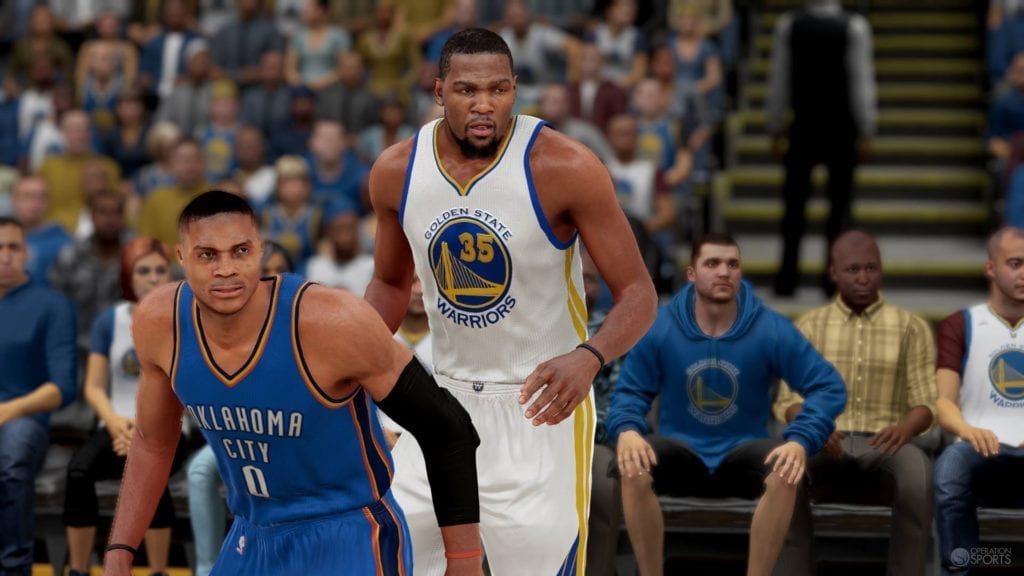 NBA 2K17 will soon be upon us (as Mike Wang’s recent gameplay blog shows), but there’s one topic I have to talk about before release season officially arrives: team defense. This past year I’ve talked a lot about multi-man interactions and defensive situations, but one thing I haven’t really talked about is how an entire defense works together. Team defense can be very hit or miss in NBA 2K16. At points the rotations are great, but other times the defense breaks down every step of the way.
So after the jump, I’ll dive in with some GIFs that try to detail the good, the bad and the ugly of NBA 2K16’s team defense.
Before jumping into specific examples, I want to highlight three elements that stick out to me overall:
1. On-ball defense is the best way to keep your team defense intact. This is an obvious statement, but if you fail to contain the ball handler then your team defense will eventually go haywire because the right defensive rotations are not always made (true in video games and real life).
2. As a general rule, NBA 2K defenses over help, especially off the corner shooters. This goes in conjunction with rule one to some degree, but either way defenses still slide too far off their defensive assignments at points. You can’t give up a ton of open corner 3s in the NBA, and you give up a lot of them in NBA 2K unless you really micro-manage things.
3. You should more easily be able to set up general defensive principles. The “points of emphasis” of saying “limit perimeter shots” isn’t helpful on its own as it just leads to everyone being covered tightly on the perimeter. This leads to a lot of backdoor cuts and so on (which is a good thing). You can set individual assignments — like “deny” and “tight” — but can only do this after entering an actual game.
In franchise mode (online and off), these concepts should be expanded upon so you can scheme things like “don’t help off shooters in corner” or something else along those lines. We can already decide to “ice” pick and rolls and all that good stuff before hopping into a game, so it’s just one added layer to decide how to guard shooters in the same manner. Alternatively, just allow users to have all the menus we have in-game made available for use before games.
Okay, now let’s get to the GIFs:

NBA coaches preach and preach about getting stops, securing the rebound and getting out on the break. In part, they talk about this a lot because even semi-transition can be hard to deal with, especially when teams are cross matching. This is also a big reason why offensive rebounding has been de-emphasized over the years; teams are worried about getting back on defense first and foremost.
In the example above, you see Steph Curry beat in semi-transition as he tries to pick up the ball handler well above the 3-point line. Curry overextends himself, and this leads to the ball handler heading downhill towards the paint. However, you don’t really see any defenders step up.
Instead, you wind up with three players under the hoop all waiting for the ball handler. This leads to a pass into the corner for a wide open jumper. In short, nobody really takes action in a way that helps, which leads to the ball handler having a free run at the hoop to make a play.
In a perfect world, the big steps up, and the wing denies the pass to the corner while Curry recovers and gets back in the play.
Here’s a similar NBA example:
In this instance, Curry is actually relatively well contained by Avery Bradley, and Jared Sullinger is there to help because Bogut is trailing the play. Evan Turner is one pass away, but he makes the mistake of taking too many steps towards the paint, and this allows Curry to make an easy pass to Harrison Barnes for the open jumper. Turner is the only player at fault here.
This differs from the NBA 2K play in that one player (Turner) makes a small mistake, but the other two players do their job. If Bradley had been burned, nothing would have changed as Sullinger still would have been there, and Turner’s assignment still would have been Barnes in the corner. In the 2K example, one player stepping up still means two other players were still arguably out of position.
Here’s one more example from NBA 2K:
Again, the issue is a lot of players end up in no man’s land. The on-ball defender gets burned on the initial action, but the offensive player on the wing is wide open as soon as this takes place. You have at least two players on the Warriors sitting in the paint not really guarding anyone or helping on the drive.
I’m highlighting this to really show off the fact that semi-transition should be effective, but it shouldn’t necessarily be that first pass that completely ruins your defense. Or to put it another way, just because an on-ball defender gets beat does not mean someone should immediately be wide open when all five players have tracked back on defense.

The Skip Pass Is Deadly

Here’s an area where I actually want to defend NBA 2K. I’ve heard from a lot of people who get really upset about skip passes leading to open jumpers. However, defenses are not usually designed to stop skip passes. The hope is that the skip pass won’t have enough zip on it, which in turn gives the defense time to hustle, recover and close down the space. This is one reason why LeBron James is so awesome; his skip passes have so much heat on them that the defense can’t recover in time.
That being said, what I will say is that too many players can make perfect skip passes with plenty of heat on them. Regardless, here’s a look at a skip pass in NBA 2K:
Now I’ll be the first to say it’s a bit of a jumbled mess of bodies on the high screen and roll, but the general rule is Aminu has to slide down into the paint to guard a cutter/diving big, which leads to Green being open in the corner for the skip pass. Aminu tries to get back, but Curry makes a perfect pass with plenty on it.
Again, you can question the frequency with which these passes are on the mark — plus the lack of sight lines at play some of the time — but the defensive rotation itself is fine here.
Here’s a similar example from the NBA to prove the point:
Towns is switched onto Curry here, so Curry takes him off the bounce and gets into the lane. I’ll call Wiggins out for being flat footed and in between assignments, but he is the help defender and sort of gets into the lane. Curry sees the defense collapse, and he makes the pass to Iguodala on the opposite wing. Shabazz Muhammad has to help off his man, and this means Barnes is open in the corner after Iguodala makes the extra pass.
Both examples follow the general rule of thumb of allowing the skip pass rather than the easy shot under the basket.

Most of what I’m talking about here has to do with degrees of help defense, and I’m the first to admit this is a tricky topic where you’re not going to get everything right. However, I will again say NBA 2K is too generous helping off shooters. I’ve heard some NBA coaches talk about how young players in particular will try too hard to help on defense. This probably comes from a noble place in that the player is trying to play into the team concept on defense, but some players just get overzealous with it and completely forget their actual assignment.
I can’t pinpoint if it’s a ratings threshold that causes some players to over help, or it’s a “point of emphasis” too many people use, or if it’s just something where AI defenders are only programmed to help one way no matter where their assignment is on the floor. Whatever the case may be, the resulting outcomes can be frustrating at times.
On this high screen and roll, the ball handler does initially beat his man, but he doesn’t actually go into the paint. Nevertheless, the opposite wing defender completely abandons his assignment and sprints into the lane to help even after the pick and roll has been contained. This leads to an easy pass to the wide open shooter.
In this next example, you can’t even see the Blazers’ player in the far corner at the start of this play, but if you watch the GIF a couple times you should see how wide open he is here. This seems like a very innocuous pick and roll on the wing, yet that one Warriors defender completely vacates his assignment to get both his feet in the lane. He does not need to help at all here, and yet he completely sells out. The offensive player lets his defender off the hook by diving into the paint, but he’s wide open in the corner if he just sits tight.
What bothers me the most about help defense in NBA 2K is that the game clearly understands defensive concepts. It can be absolutely beautiful to watch at times, which just makes the blatant breakdowns more confusing. Again, there’s a difference between taking one or two extra steps towards the ball and completely abandoning your assignment.

But as I said, NBA 2K really puts it together at points. This play is perfect. The high screen and roll leads to the defending big man being caught out high. The opposite corner defender has to sink in and get inside of the rolling big man to cut off the pass. The opposite corner defender rotates as he should, and the ball handler makes the wrong decision by passing to the diving big rather than skipping the ball to the corner for the open shot.
A defense can only take so much away, but you want to make the offense earn its chances, and here the defense puts the pressure on the ball handler to make the snap decision, and he makes the wrong one.
Here’s a similar example from the NBA:
Aldridge gets caught on Thompson in a semi-transition situation. Thompson beats Aldridge off the bounce, so Kevin Martin has to help. Danny Green also realizes this and gets inside of Iguodala so he can’t get the dump-off pass for the easy score. However, unlike in the NBA 2K example, Thompson realizes this and skips the pass into the corner for the shot. Green makes a valiant effort recovering to Barnes, but in this situation he can’t do much more than make a late contest.

All I’m looking for moving forward is some consistency. If it’s a single player getting caught flat footed here and there, or a defender not making the right rotation as a pass goes around the horn, that’s fine. But you want to make offenses earn their points. You want to force them to make that extra pass rather than just handing over open jumpers on the initial offensive action. If defenses in NBA 2K17 do that a little bit more often, I think we’ll be in a really good spot in terms making the “extra pass” really matter this season.