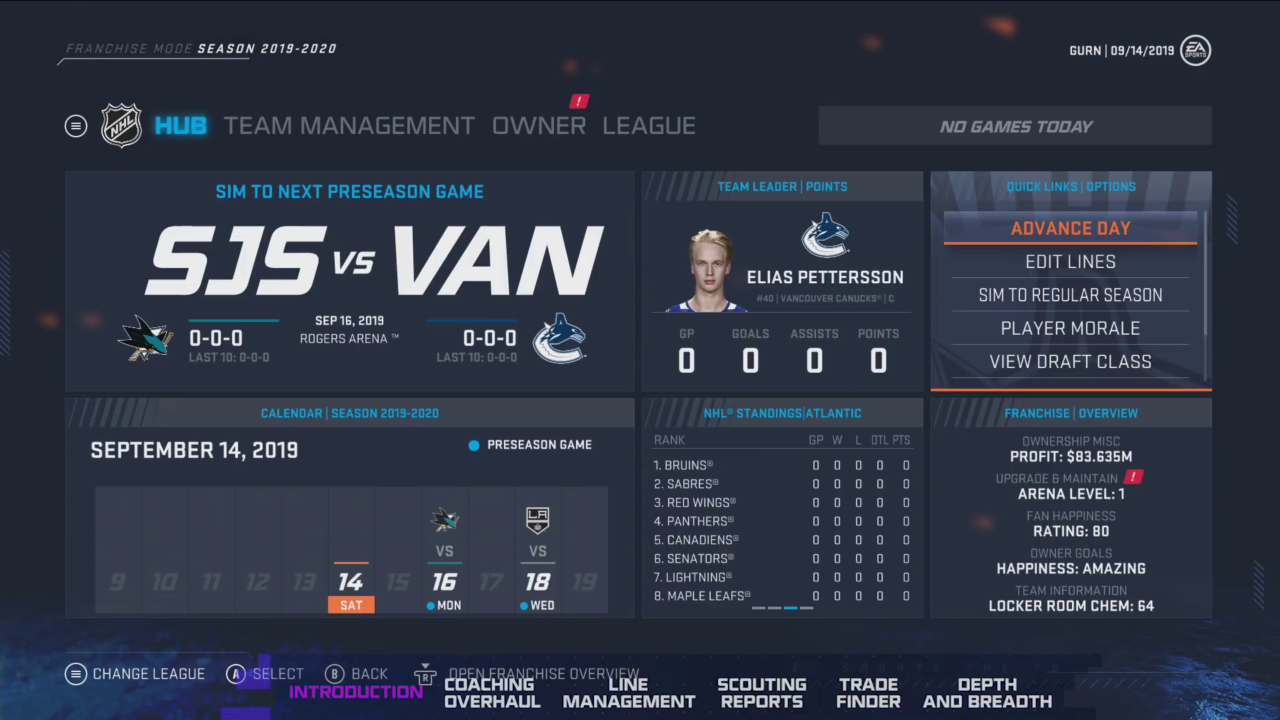 The folks at EA dropped an NHL 20 deep dive on Friday to show off the changes made to franchise mode. Narrated by Gurn Sumal, franchise mode producer, we were talked through some big changes to the mode that are looking to make a big impact on this year’s game.

At first glance, it appears that sim heads and franchise lovers should really rejoice at the work put in by Gurn and his team.

Let’s dig into each new addition and decipher what it could mean for us this year.

It appears the coaching overhaul ties into, and was the base for, the other additions that were talked about in the video. As mentioned by Gurn, the introduction of coaches in NHL 20 allows the team to also add a line chemistry system, a brand new conversation system and all-new scouting reports.

These things all tie back into the coaching system and the addition of coaches into the mode. These additions were apparently built on and around the scouting system that the team had last year in NHL 19. The idea here was to give the user as much depth as possible. 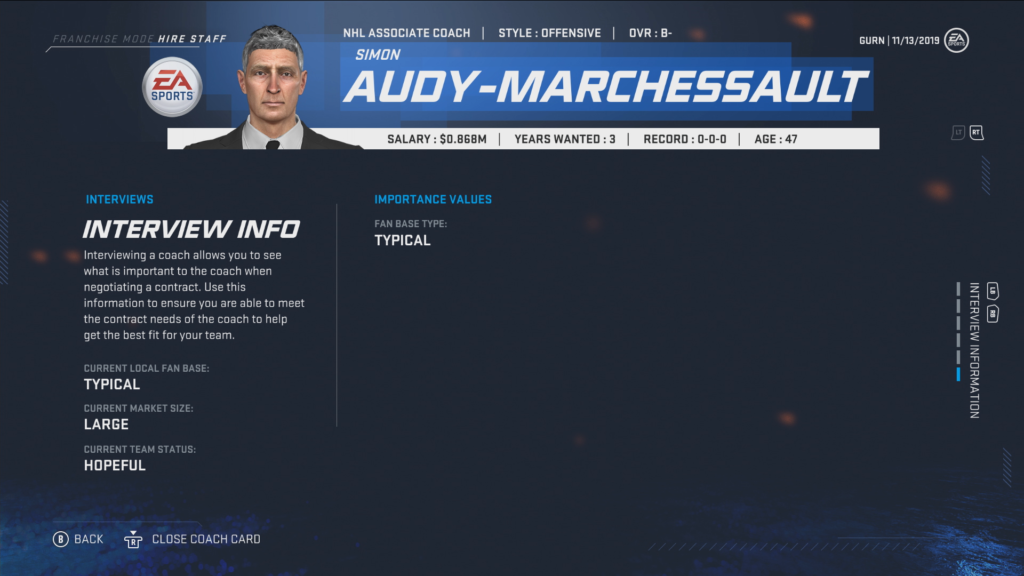 As you’d find in the real NHL, the team has set users up with the ability to have coaches for both their NHL and AHL affiliate teams; you’ll be selecting a head coach, associate coach, assistant coach and goalie coach.

Roughly 100 3-D heads were added, and these coaches will be seen in-game on the bench, which is a must-have feature. NHL players can become coaches in the league and their likenesses will translate from the ice to behind the bench as well. With the introduction of coaches to NHL 20’s franchise mode, the traditional way of building your team (best potential, highest overall rating) is no longer feasible if you’re looking to build an ongoing dynasty.

You’ll now need to look for players that fit your coaching scheme and strategy to put the best squad on the ice. At first glance, this should cause users to have to do their homework on potential players they’ll want for their squad because a player might be highly rated, but might not fit in with their coach’s plan and could adversely affect the team.

Each coach has a “card” that breaks down information about them into six tabs:

Let’s look at what each tab implies for a respective coach.

Each coach will have six key attributes that affect different areas both on and off the ice: 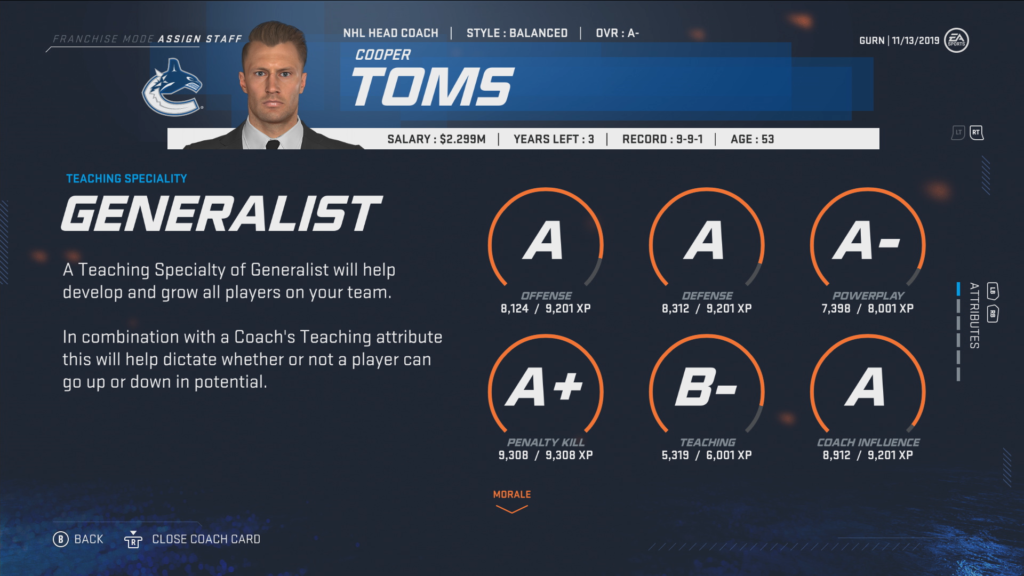 These attributes directly translate to what can happen on and off the ice. Ratings for these attributes are on an A+ to F scale. The example given showed a coach with an A rating on offense and defense, an A- rating for Power Play, and an A+ rating for the penalty kill. This would mean that these four areas both in-game and within the sim engine would be impacted based on the coach’s ratings.

If the coach were to have C and D ratings for the four aforementioned areas, then this would affect the team negatively and would lead to poor results on the ice.

For the Teaching attribute, this ties in with the respective coach’s “Teaching Specialty” — this would directly link with how quickly or slowly a rebuild for your team would happen. The Teaching Specialty directly applies to an area where the coach would affect player potential.

So a Generalist, as used for an example, could affect all positions and player potentials. If a coach were to have a specialty specified towards either forwards, defensemen or goalies, they would only impact player potential for that group of players.

Coach Influence works similarly to Teaching but impacts the coaching staff directly. A higher grade here allows the staff to grow more and delegates coach XP at a better rate.

Under this tab coaches will accumulate stats and can win the Jack Adams Award at season’s end. You’ll be able to see the team that was coached as well as career totals on this tab. This information also carries over to players, showing the individual stat line for the team that he played for in a respective year.

Morale this year plays a role in various areas of franchise mode and will affect different aspects of the mode. A coach’s morale will affect staff chemistry that will in turn impact overalls of the coaching staff, which will impact gameplay and the sim engine. The smiley faces are no more and have been replaced with bars that represent how much (or little) morale is there at that time.

There are four different morale meters: 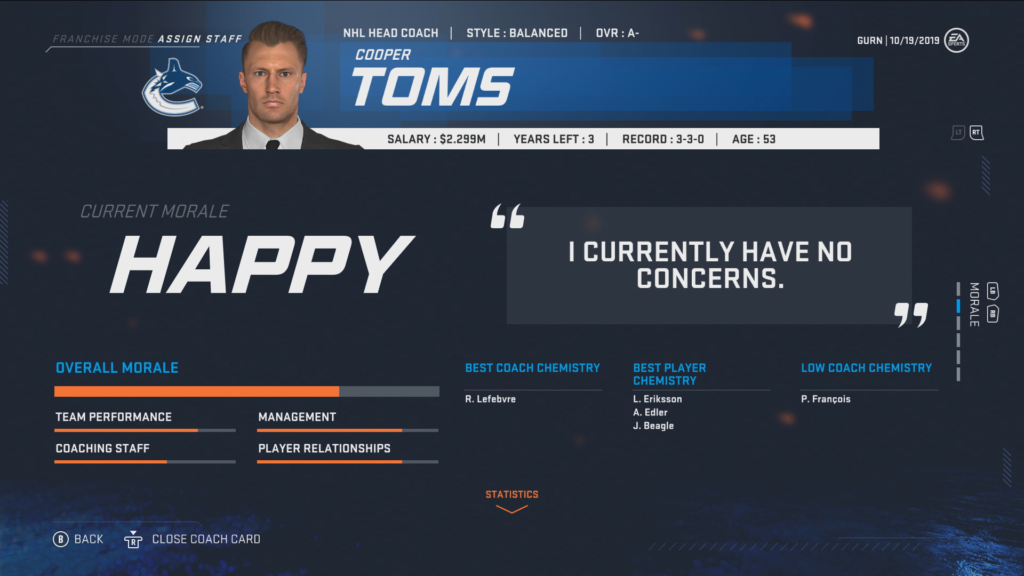 In addition to this, players will have a satisfaction meter that shows how satisfied they are with the coaches, which can impact job security. This puts the decision in the user’s hands as to whether a coaching change could be in order, or if changing out dissatisfied players could prove to be a better decision.

CPU users will hire and fire coaches throughout the year as necessitated by a respective team’s expectations of their coaches. For example, if a contending team expects their coach to win the Stanley Cup but the coach ends up going on a 10-game losing streak, the coach could be placed on the hot seat.

If coaches don’t pick up the slack, they could get fired from their post, which users would be notified of through a pop-up system added in by the franchise team.

Due to the addition of coach morale, a new conversation system has been worked in to flow with the morale. The coaches and conversation have an impact on the morale of the coach, as well as the team and how your team is built.

You’ll have the ability to agree, persuade or disagree within conversations, as well as having the ability to make a promise to a coach. Making a promise is new to the conversation this year and allows you to let your coach know you’ll do what they’ve suggested. If you make a promise and fail on it, this will cause you to lose management morale at double the amount. If you keep your promise to your coach, you’ll gain extra morale, which will raise a coach’s morale and individual rating.

The new conversation system also gives you the ability to hold coaching interviews within the hiring and firing of coaches. This expands to prospects in scouting and drafting, where you can now interview prospects to try and get extra information on potential draft picks. 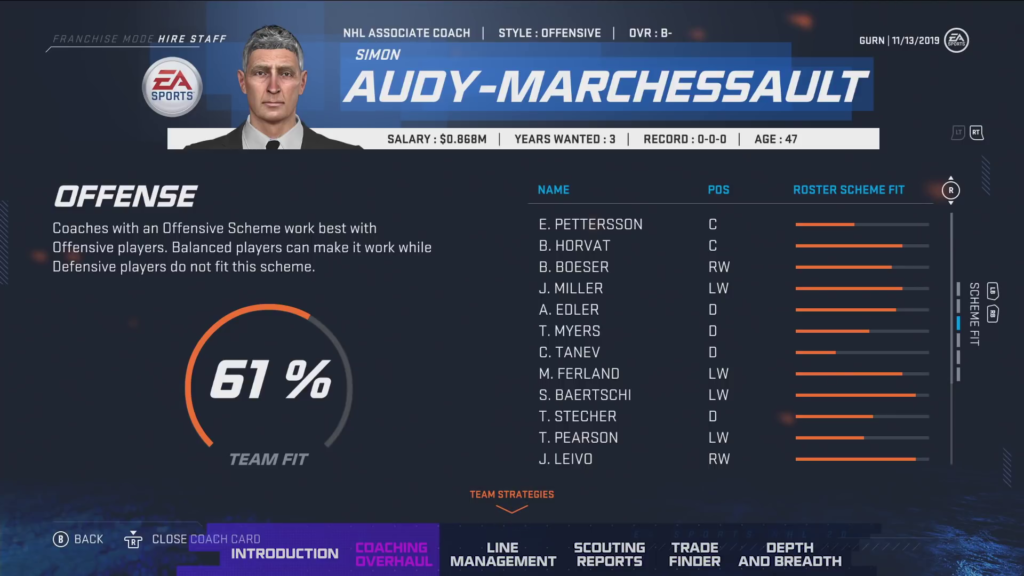 This tab shows the team’s fit as a whole based on the team’s strategy. This tab also shows each player on the team and how he fit into the coach’s scheme. When the coach and a respective player both match in terms of the same scheme and style of play, this has a big impact on chemistry.

This tab shows what a coach wants the team to do as a whole on the ice.

This tab shows what a respective coach wants the players to do for each individual line on the ice.

A player that matches well with the scheme is a valuable asset that can also prove to be versatile on any line. If a player’s strategies don’t align with the coach, this can impact line and team chemistry. Line chemistry can range from a +5 overall to a -5 overall. Player type and player position can alter chemistry as well. If you play someone out of his natural position, that can potentially affect line chemistry.

Due to the importance of scheme fit and team chemistry in NHL 20’s franchise mode, the development team added a couple new tools to the scouting system to help users identify the right players for them to acquire for their teams. These reports are for both pro and amateur scouts.

For pro reports, a team scouting report has been added allowing you to see team strategies, coaching staff and line strategies. The pro player report has been improved and allows a user to better assess if a player is a good fit for the lineup. In turn, this tool is highly important when looking at potential players to acquire. The Pro Scout Assessment allows you to see if a player will fit with your team and where he will fit on it. 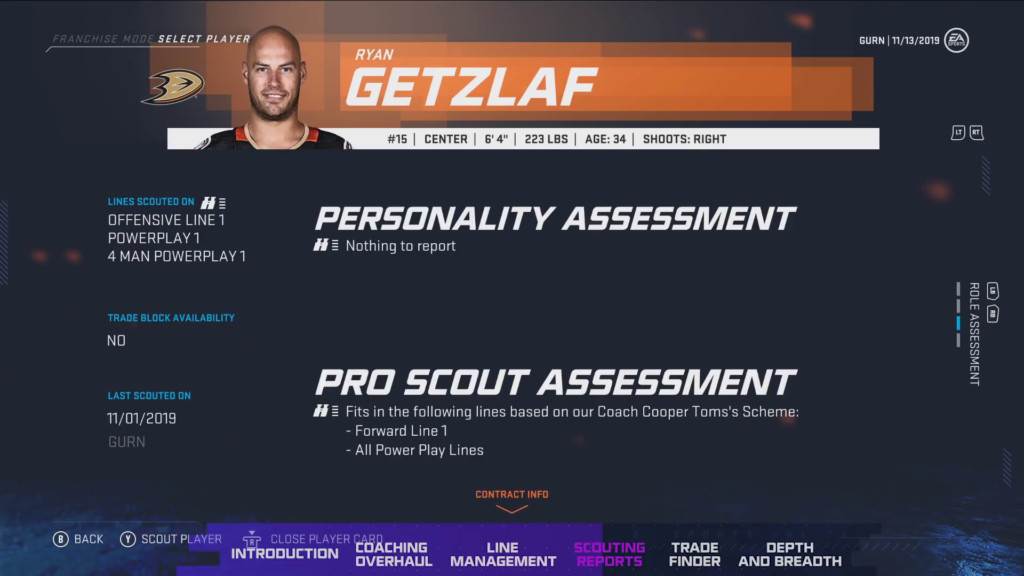 Two new amateur scouting reports were added, namely the Scheme Fit Report and the NHL ETA Report. The NHL ETA Report gives you a gauge to see if a player is NHL ready and can help right away, or could identify if a player may need a few years of development before being brought up to the big leagues. The Scheme Fit Report ties in with the team building meta and allows you to identify if the player fits your coach’s scheme.

A welcomed addition, the trade finder (shown as “Find Trade”) allows you to find roster moves for players you want to move, as well as players on other teams you’d be interested in acquiring. With the addition of the logic to trading bad contracts, the need to add incentive to a trade has been worked in to increase your chances of success. Thanks to this new reworked logic, trades that simply weren’t possible in past iterations of NHL games are now plausible because teams will assess their cap space and assets, and will agree to take on bad contracts if the other side sweetens the pot.

In previous NHL games, you could spend a lot of time just trying to find a team that might even be willing to trade. The Trade Finder now locates trade partners for you in seconds based on the assets you choose to either trade out or try to acquire. When using this feature, you’ll be able to accept the proposed trade, edit the trade or decline the trade.

On top of the large amount of information seen above, EA has added and improved several other areas in NHL 20’s franchise mode: 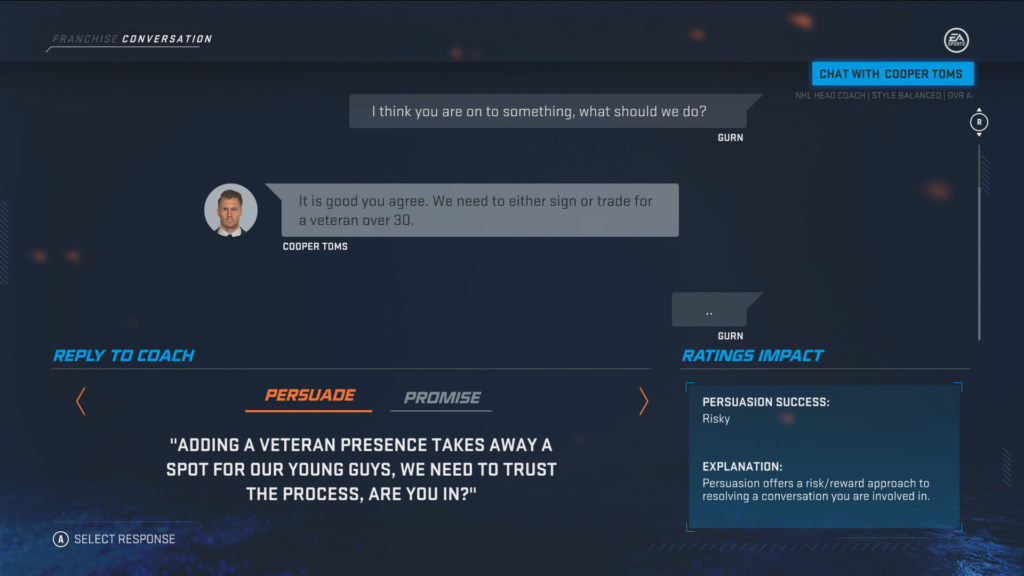 After watching and dissecting the franchise breakdown video, I can say the effort by the NHL franchise team seems quite ambitious, so hopefully it works as advertised and as intended. That being said, I’m here for all of it. These additions are definitely refreshing and a step in the right direction for a mode that hasn’t exactly gotten the most love in a long while. When you see a franchise like NBA 2K manage to improve their modes year after year, and take depth and community feedback to heart to ensure that their franchise modes get new touches each year, it’s encouraging to see what NHL 20 has in store for its fans of franchise mode.

I’ll definitely be looking forward to once again bringing the Quebec Nordiques back to the NHL and making great use of all these new features. Now we just need the franchise team to add in carryover saves (and bring back online franchise) next year, and we’ll really be in business.

What do you think about the new features being brought into NHL 20’s franchise mode? Are you sold on what’s being offered this year, or are you skeptical of what’s been mentioned? Let us know in the comment section below.