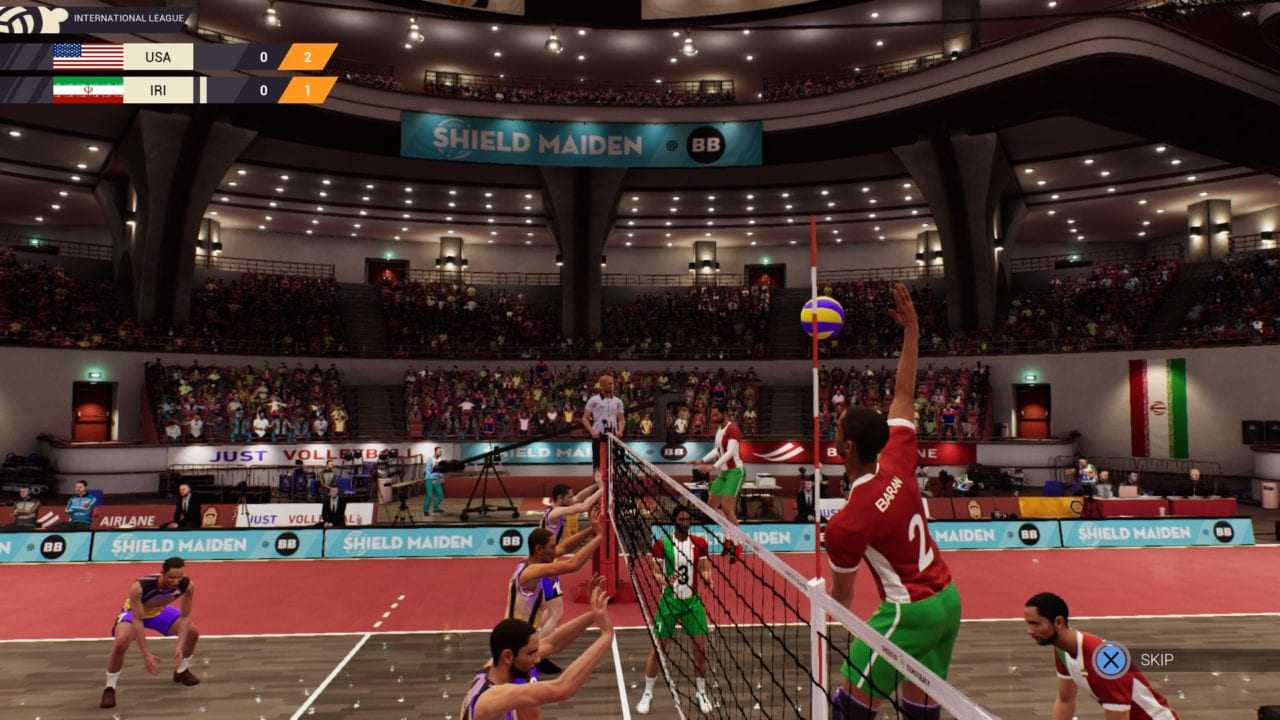 Black Sheep Studio has released Spike Volleyball, a volleyball experience that’s been designed to try and capture the power and precision of the sport. Spike Volleyball opens up with a tutorial of how to use the controls and pass the ball from player to player. The controls are unique because it does not require movement of the joystick in any way. Passing the ball from player to player involves the timing of the buttons to set up a spike. The better you are able to time the button, the better the initial pass will be to the setter. In my first session with the game, there was a considerable learning curve with timing the serves, passing and blocking. After more time with the game, I began to start to develop the timing required for a solid pass, set and spike. Spike Volleyball also has a few different modes to choose from, such as friendly matches, weekly challenges, tournaments, career mode, and local and online multiplayer.

After many hours of gameplay, here is what I like and what I don’t like to this point.

The game holds up somewhat well on the visuals front when considering where it’s trying to be on the market. It’s not on the level of any of the top current-gen offerings, but as a $40 title, it gets a bit of a pass here. And to be clear, when I talk about the visuals, I’m referring to the characters and stadium graphics as animations fall into a different category for me. The stadiums look good enough, and the reflections on the court tie together nicely with the lighting in the arena. There are a variety of venues to play at as well, which keeps things relatively fresh. 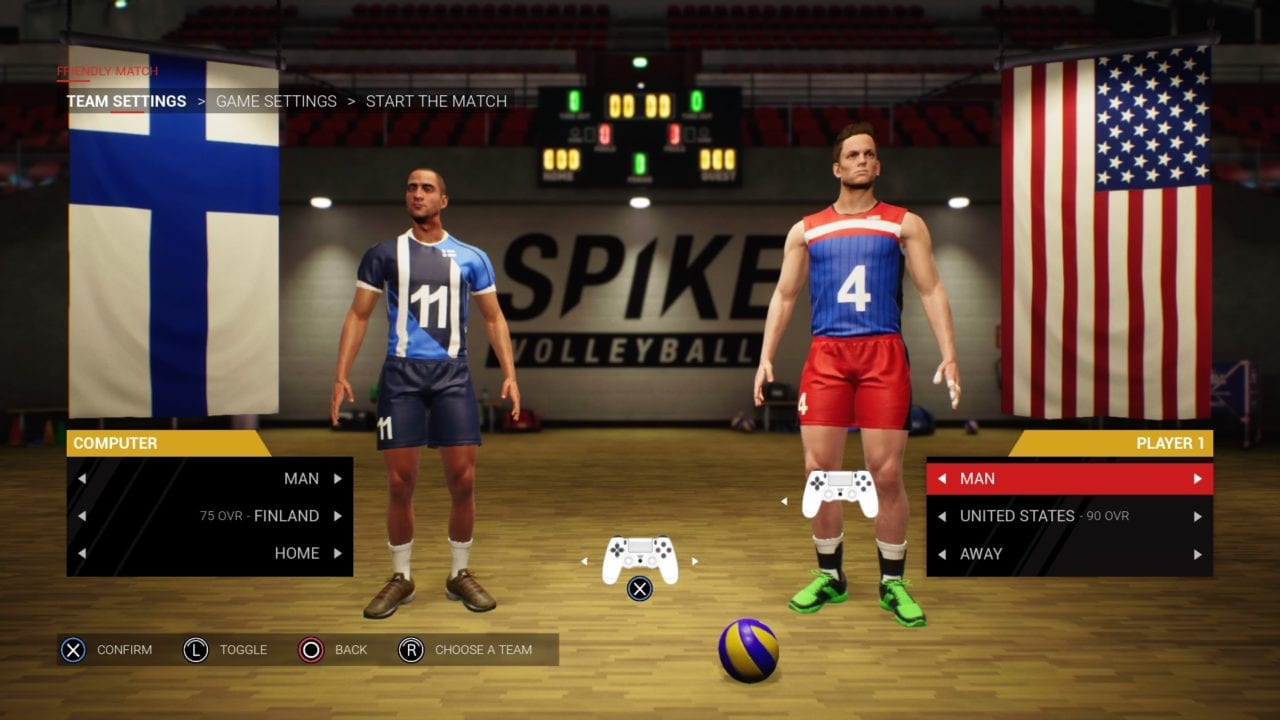 There are three types of serves: powerful serve, float serve and static serve. If you time any of these correctly and target the proper areas of the defense, you can put your opponents in a tough spot. The powerful serve can fly faster at the opponent and cause them to miss the ball entirely. Serving the pass does have a solid feel, and you can experience the difference between a powerful serve versus another. The animation of the service is on point and creates a realistic feel beginning each point. This is also complemented by the various types of formations you can use in your strategy to win each point. The variety of formations can be combined with rotating players to create a strategic advantage during the match. You can use these strategies to hide your setter to form an effective spike setup. On the statistics side of the things, the game does a great job including a wide range of measurables. Anywhere from spike to reception, to dig and serve, etc.  During technical timeouts, there is plenty to analyze concerning which players you should include in each strategic formation or where to add them in the rotation. If you are able to create a balanced rotation at each position, you can find yourself dominating the AI throughout the game. 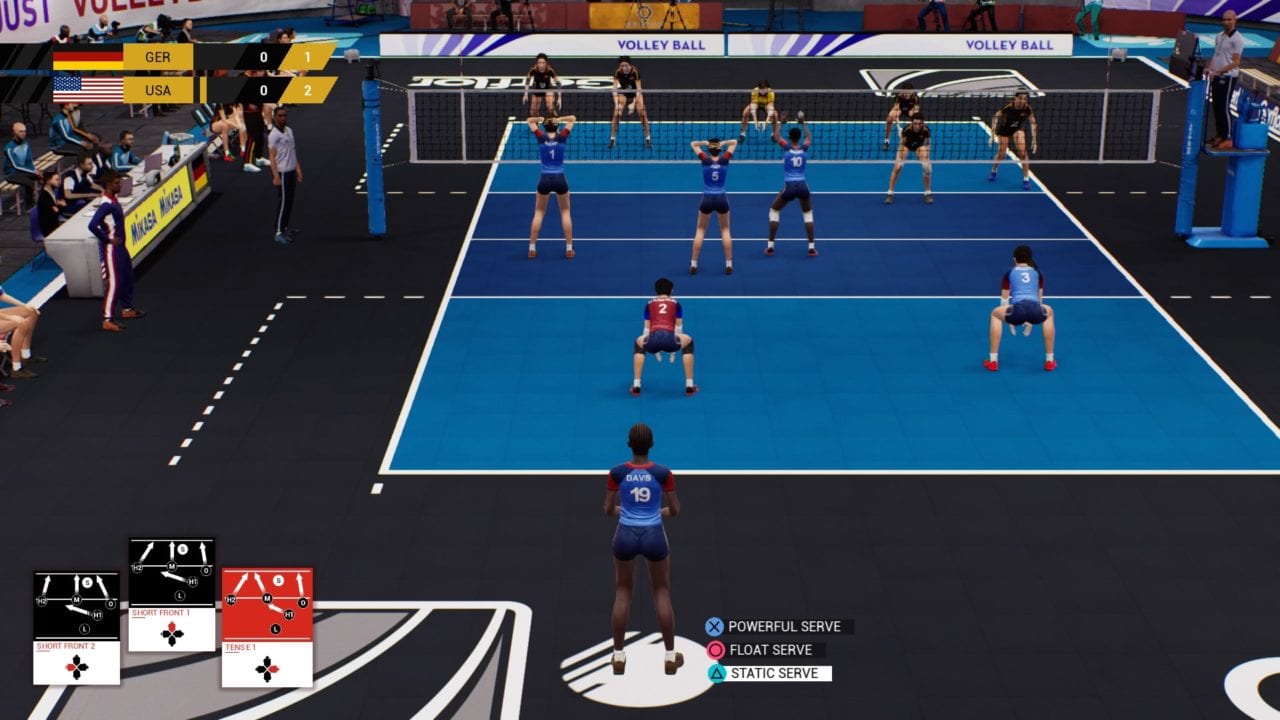 Spike Volleyball does a decent job of providing a variety of modes to complement a standard friendly match. The game includes a team season mode, several tournament options, and a career mode that allows you to customize your team. In “my team” career, you can select the type of jerseys, colors, logo and more for your squad. As you learn the timing aspects and strategy of the game, these modes can offer a challenging experience as you increase the difficulty of the AI. Furthermore, you can also play online or local multiplayer in some of these modes — assuming anyone is online to play against.

The serve animations are fantastic and give you a realistic feel for the explosiveness of jump serving the ball to the opponent. However, once the ball is in play, a lot of that explosiveness feels a bit awkward. The physics get a bit buggy to the point where some of the spikes and blocks seem a bit random. When setting up your hitter, the spike often looks like it is coming off the wrist rather than the ball being smashed off the hand. You have free reign to hit the ball in any direction, but the players’ bodies do not always adjust to the direction you are hitting, so sometimes it can look and feel a bit off.

I also found that most points were won after the first set and spike. The ability to volley the ball back and forth is possible, but it was not consistent in my experience to have many fluid strategic moments throughout each game. 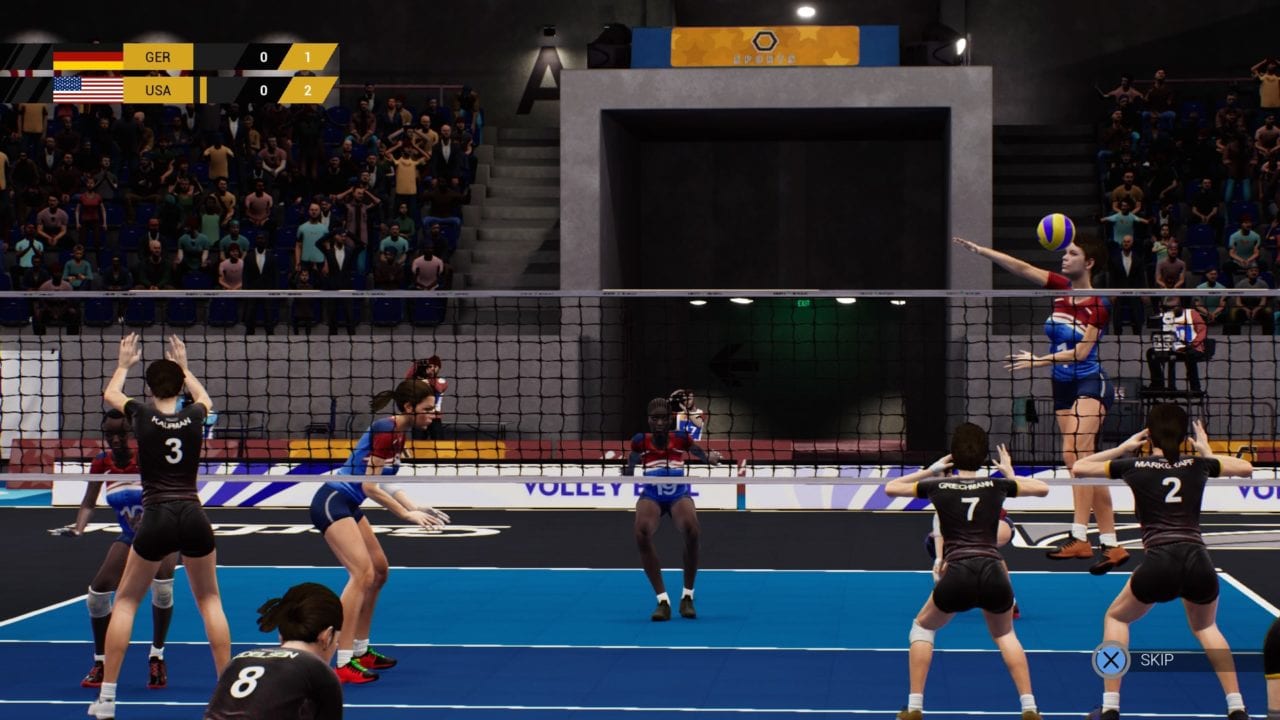 The presentation feels basic. Games like Spike Volleyball require a presentation that can amplify the user’s experience. The opening presentation is a bit lackluster with the voice acting being below average. Each game opens up with a decent introduction about the game and location. However, other than that, nothing in the script made me pay closer attention to which players on the opposing team were considered dangerous. The other missing piece of the presentation system is color commentary. Other than the opening to each game and a technical timeout, the real-time gameplay is a bit boring due to the fact there are no announcers to support the play on the court. I become distracted at points because there is no commentary to talk about strategy, players or statistics in the game. 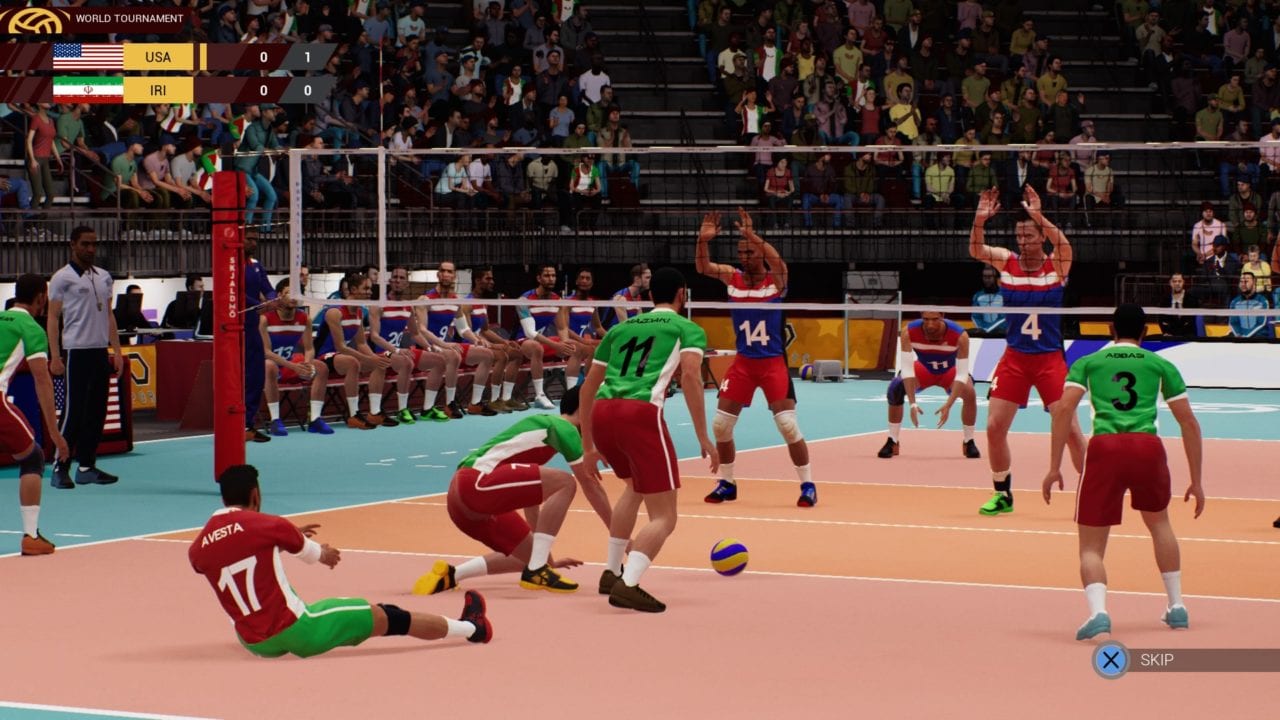 User-controlled instant replay is a feature that is a necessity in sports games. The best part of a sports game for me is when I can go back through an amazing play I just pulled off and analyze it all over again. Or as another example, I like to see how the defense adjusted to something I was doing, or I can see how a formation created a mismatch against the opponent. Beyond that, sometimes I simply like to go into instant replay to enjoy the level of detail in the graphics and animations. Without user-controlled instant replay, it is hard to get a feel for how the strategy of each set plays out. I found myself wanting to go back and see if the libero (the backline defensive specialist) rotated to his or her correct position after the serve. If there was the ability to go back and watch how your hitter played a specific set or where you should have targeted your serve, it would make made for a more enjoyable experience. 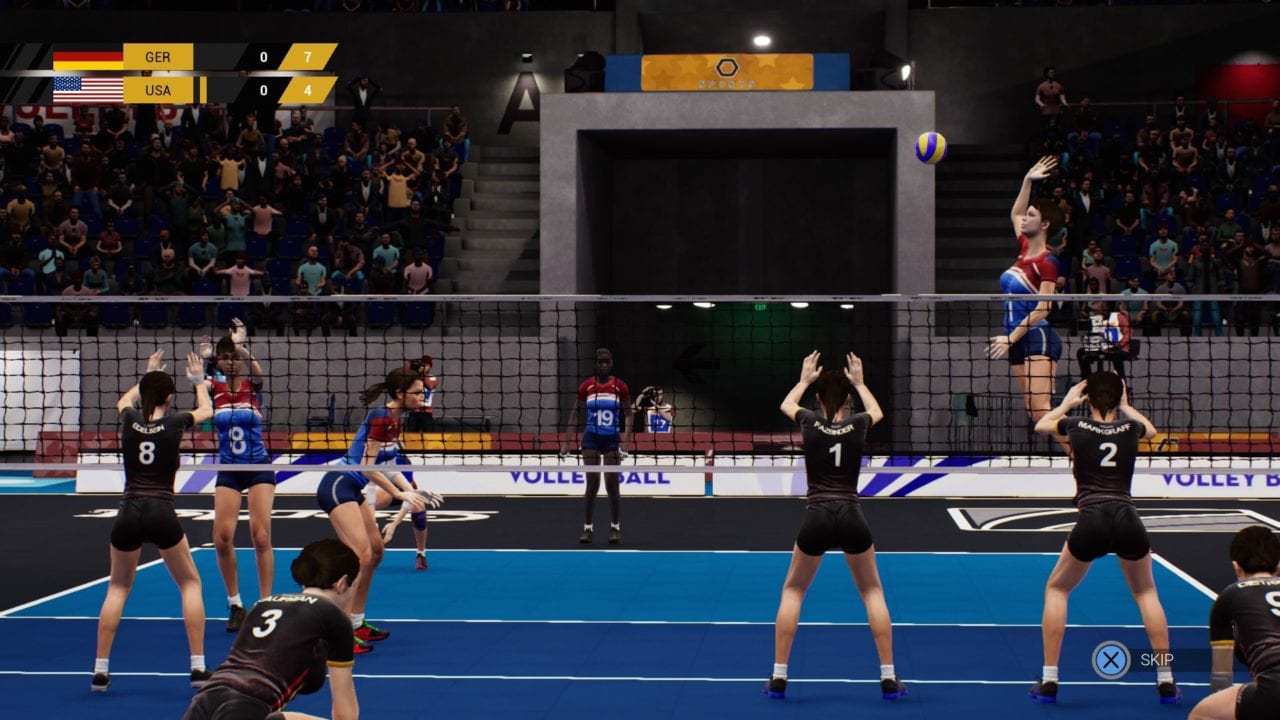 Just about every sports title that has been released also includes the ability to create a player. You can change height, weight, build and a variety of features to mimic yourself or your dream athlete. The only problem is Spike Volleyball did not include it. Spike Volleyball is not part of the major sports title scene, and it’s not a sport where a ton of people have a close connection to the real athletes playing it on the biggest stages. So it feels especially odd to me that you can’t create a unique volleyball athlete to lead your team. Although you have the ability to create a custom team, the create a player feature is what allows you to personalize your experience.

Black Sheep Studio did a decent job with Spike Volleyball. Volleyball is a fresh genre outside of the power sports, and this game captures the power and precision of the serve. There is a multitude of statistical categories to analyze each player’s ability at each position. The game also includes a variety of strategic formations to create an advantage over opposing teams. Be that as it may, the game does not do as well with gameplay that is consistently buggy after the serve. With the gameplay being below average overall, Spike Volleyball does not make up for that enough with any other outstanding features, such as create a player or the presentation. The game is still worth a try if you are looking for a sports gaming experience outside of major titles out there — especially if you can play against another human — but it doesn’t feel like a $40 experience.