Lion Castle, a Netherlands-based studio, has developed a reputation for creating racing titles of multiple sorts and on multiple platforms, including PlayStation, Xbox, Nintendo Switch and mobile. Some of them you may have heard of, some of them probably not. The newest release focuses this time on an F1-style game, but without the actual F1 license(s).

What makes this title unique compared to other racing games is its focus, which centers entirely around huge explosions, huge crashes and the ability to leave one’s driving etiquette back in the garage. While the idea and premise sound interesting, the execution is extremely important as the experience on the track must outweigh the lack of licensing or multiple varieties of vehicles to choose from.

With EA’s newly remastered Need for Speed recently released, and the off-road hit Dirt 5 from Codemasters, this also means there are a lot of options to choose from these days. So, Does Speed 3: Grand Prix succeed, or does it find itself stuck in the back of the pack of an already crowded genre? Let’s find out… 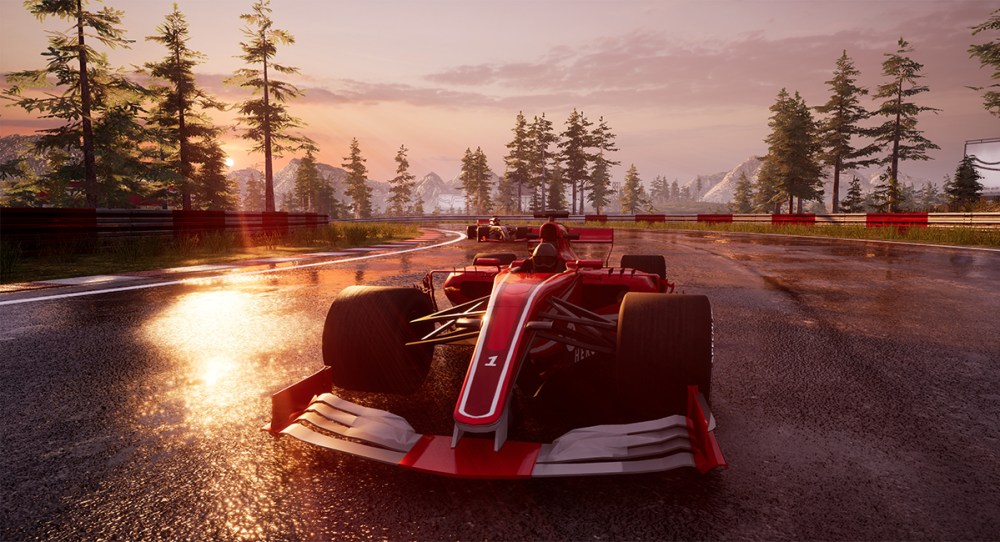 Even an arcade racer needs to have solid controls, just maybe not as deep or as intuitive as say the F1 series from Codemasters, and thankfully the control scheme in S3:GP is just that, solid. It does nothing groundbreaking, but what it does do it does right for the most part.

Racing around the tracks in S3:GP requires a combination of finesse, control, and track knowledge, and with the control scheme in Speed 3 being simple and easy to understand, it let me focus on the other two.

The biggest compliment I have for the controls in S3:GP is that it doesn’t get in the way of what I am trying to do on the track. When I’m in the car, I can feel the track and the connection between the surface and the tires, and that type of feedback is always welcomed.

It took me a single race to grasp what was being asked of me while behind the digital wheel, and I gained the ability to understand how to navigate my car in any situation with ease. This is important as the game offers a variety of different track styles that will see you fighting for speed control, and the ability to maneuver around the over-the-top type destruction you will encounter when racing.

This is where the inner child in me comes out and the memories of Pole Position are conjured up, but in a good way. The level of destruction and explosions seen on the track is, simply put, fun as hell to watch and be a part of. The amount of detail in the damage model might be my favorite part of Speed 3, and speeding around the carcasses and dismembered wheel components on the track adds a bit of challenge the game so desperately needs. 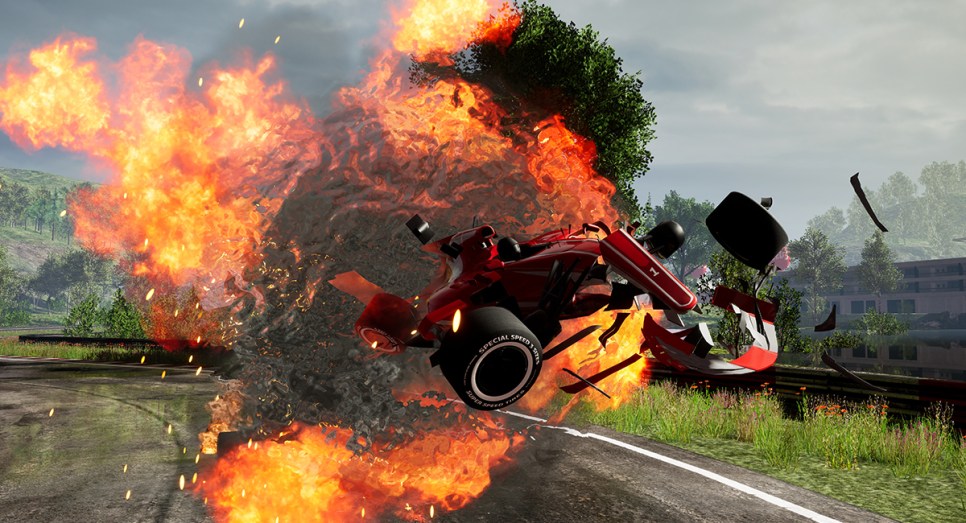 This destruction also comes into play a lot. While the cars will regenerate, often the tires and rim will stay on the track throughout the course of the race, and this requires you to successfully navigate around them or risk damaging your own car.

As much as I loved the damage and destruction in S3:GP, there was one big issue that was enough to warrant mentioning it. That issue being that after your car regenerates from a crash, oftentimes you will be dropped into the middle of the track to resume your attempt at a win, and by doing that the other cars will smash into your vehicle and destroy it before you had a chance to take control of it again.

Much like F1 in real life, S3:GP does a nice job of offering up some different variety when it comes to track styles. None of them are super memorable, with exception of maybe the figure-8 style track that allows for cross-crashes, but they are fun and just different enough from each other.

I do wish there were more of them to take on in the game, but weather and event styles help overcome that a little bit, and going online gives it a bit more juice. 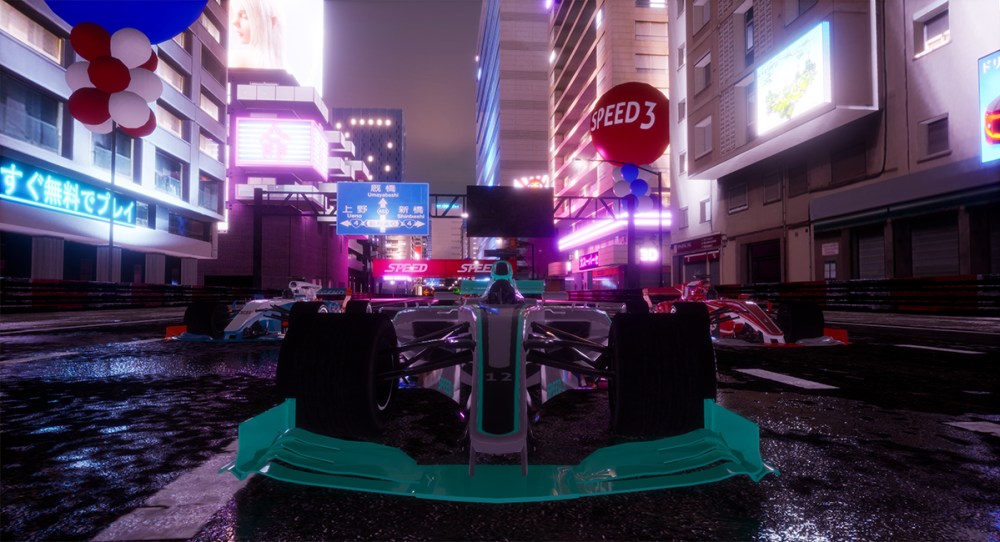 Certain tracks are built for speed while others require quick decisions, and understanding the track layout will be how you avoid disaster. With the tracks themselves, you will find an assortment of styles, ranging from a standard F1 track to the bright lights of Tokyo at night, and each one required me to learn the nuances of it to become successful.

Earlier I spoke about the control system and how I thought the design and structure of it played out well for the type of game that S3:GP is, and the combination of the fun track designs and the overall control offers up some solid synchronicity that helps make the racing a bit more enjoyable.

In this day and age, even a budget title like Speed 3 needs to offer some depth for the community, and sadly, the depth in Lion Castle’s most recent release is comparable to Atari’s 1982 Pole Position, The game offers a bit of depth in the form of tournament mode, which sees you start as a driver and work your way through a short rookie season before hopefully being promoted — and so on and so forth.

Even in tournament mode though, there are no driving stats, other than accumulated driving points for each finish, and the excitement of that wears off after completing your initial rookie season. There are no vehicle upgrades, which for me seems like it would have been an easy and smart way to add some depth to the title without blowing the budget.

Even mobile games offer upgrades like this, and so asking for something as simple as vehicle upgrades in the form of stronger body types, better tires and better engines seem reasonable.

Now it’s not all bad in terms of depth when it comes to S3:GP, as the game does offer online to play against friends, a time trial option and a bit more, but in the end, I fear that many will still feel shortchanged with a purchase of this title, even at the suggested retail price of $29.99 (USD).

Another big issue with S3:GP is the AI, and that’s never a good thing when it comes to any racing game. The AI is super aggressive, but also super dumb, and offers very little competition even on the hardest level. On multiple tracks on the hardest level of difficulty, I never lost, and more times than not, I won as easily as I did on the easiest difficulty.

I witnessed the AI unrealistically drive headfirst into the wall without a single ounce of provocation from myself or other AI drivers on the track. Sometimes the AI would race me as if it were an F1 simulation, and other times they would make a 90-degree turns to try and take me out. None of what they did seemed to have any logic to it whatsoever. 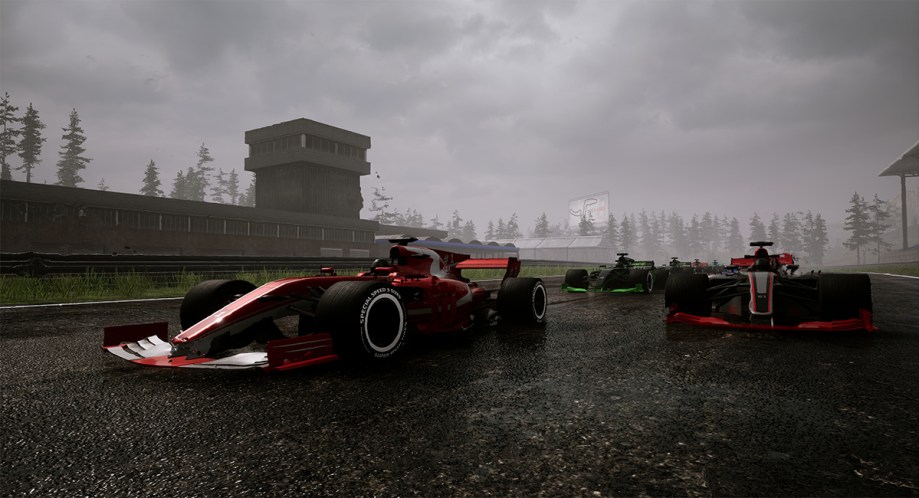 Sadly, this lack of competition carries over through every single mode the game offers, and about the only real challenge people will face is if they take the game online.

When I usually list a lack of presentation on my “what I don’t like” list, it’s because of just that, the lack of it. In Speed 3: Grand Prix, there is literally no presentation at all. No pre-race flyover, no pre-race introduction and no focus on your driver in the game’s tournament mode.

It’s not that I didn’t like what was there, it’s there was nothing there to like, love or hate. Regardless of what mode you are playing, and trust me there is not many, the game takes you from intro screen to race and back to the intro screen, which gave off a very mid-80s type of vibe.

While I completely understand that this is a budget arcade title, maybe a bit more than a standings screen would have helped push the value up. Does it detract from the racing action on the track? Of course not, but it doesn’t help it either.

I had a little bit of fun with Speed 3: Grand Prix, but that’s all it amounted to at its best: a little bit of fun. There just isn’t enough here to warrant a purchase at full price or to knock something else out of my already ever-growing rotation of games. Speed 3: Grand Prix lacks the depth and presentation to be a serious contender in a packed room full of great arcade racers that are just better in almost every phase.

Speed 3: Grand Prix is available now on PlayStation 4, Xbox One and the Nintendo Switch. The game also can be played on next-gen consoles by simply downloading it to the console, but they are not optimized for either the PS5 or Xbox Series X. This review was via an Xbox One version of the game provided by the publisher.