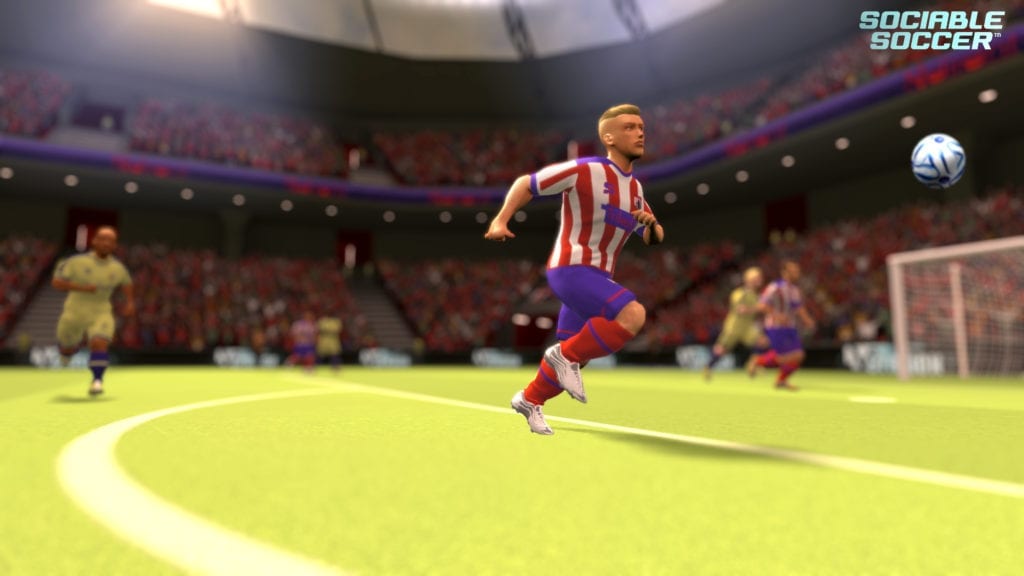 It’s been over 20 years since Sensible Soccer first arrived on the scene, establishing a unique brand of arcade football that drew quite the crowd back in the mid-90s. Although it would eventually succumb to the 3-D era of sports games, Sensi spawned multiple sequels and continues to be played to this day by a passionate group of devotees.

Sociable Soccer takes the form of a spiritual successor, putting Sensi creator Jon Hare back in the hot seat to help recapture and subtly modernize the simplistic, yet addictive gameplay formula of the originals. It all adds up to a game that shares little in common with the modern-day FIFA or PES, prioritizing fast and frantic action above all else. 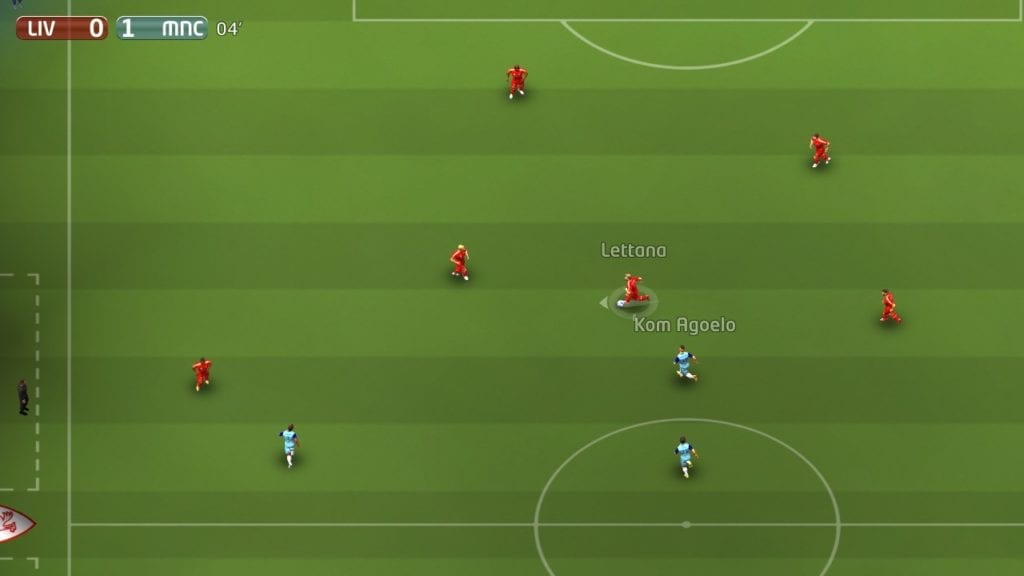 Where it counts — on the pitch — Sociable Soccer’s current early access version gets many of the basics right. The core fundamentals of player movement, passing and shooting feel crisp and accurate, enhanced by fluid 60 fps gameplay. The reintroduction of classic Sensi elements such as the ability to curve the ball with aftertouch adds a significant degree of depth, as does an unforgiving dribbling system that punishes sharp turns with a loss of possession.

This makes for good, nostalgic fun in local multiplayer sessions, but less so against the CPU. Sociable Soccer’s gameplay has already been updated multiple times since launching via the Steam Early Access program in October, and has come on leaps and bounds since then. However, in its present state, the AI often fails to act in a human-like fashion, and goalkeepers have a tendency to let in some suspect goals. The game cries out for a manual player switching feature at present, too, with the automated mechanic proving erratic by design.

Indeed, Sociable Soccer finds itself in somewhat of an Alpha state at present, but that’s no great criticism. It’s merely an observation that many of its planned features have yet to be implemented, encompassing everything from in-game substitutions to online play. This is an ambitious project, with the goal of implementing such features as DIY competitions and even an Ultimate Team-style mode, but it would appear a challenge to achieve these goals if the game still hopes to meet its ‘early 2018’ release date. 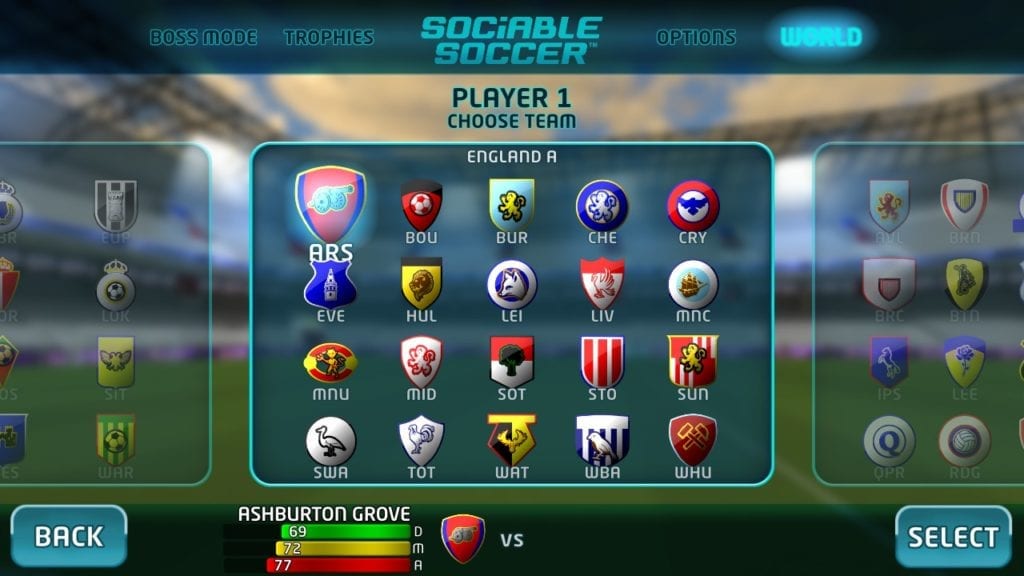 One of these ambitious features is already present in the form of Boss Mode, which challenges you to take on a hefty selection of unlockable tournaments. Its well-designed premise forces you to make use of the game’s massive offering of clubs and teams from across the globe, all the while presenting its tasks in various league and cup formats. There are no managerial aspects to speak of at present in terms of buying and selling players, and while that limits its appeal, there’s still enough content here to keep you invested for a good while.

It can’t be understated just how welcoming it is to have over 1,000 clubs and international teams replicated in-game, either. I can take charge of my beloved Walsall FC of English League One before switching to FC Thun of the Swiss Super League, and this brilliantly replicates the feeling of choice that lined the original Sensible Soccer games. All teams and clubs are unlicensed, of course, but a data editor is planned for the game’s full release to help alleviate this issue. 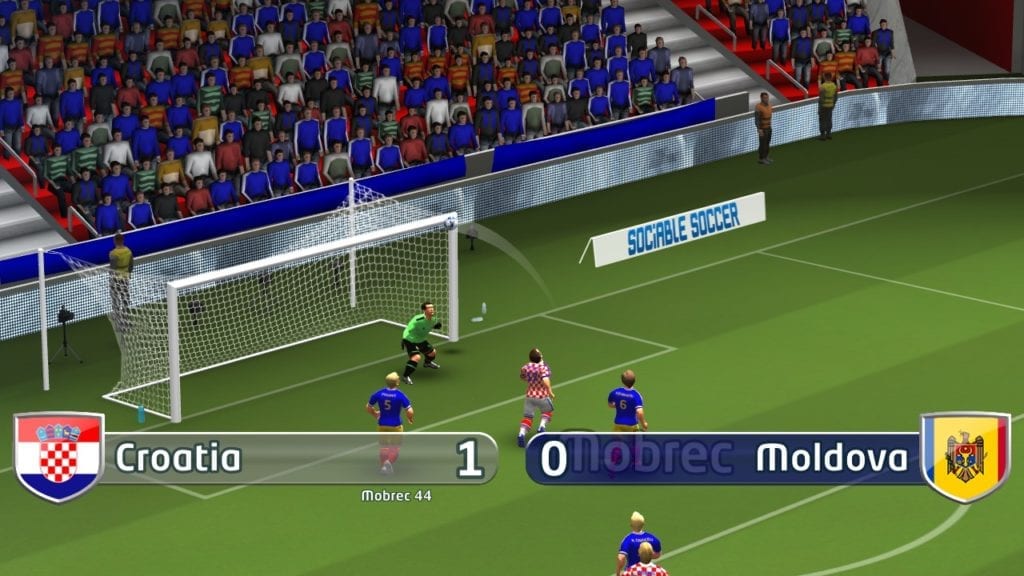 Sociable Soccer‘s early access incarnation is quite a buggy experience at present, with issues such as paralyzed players and game crashes occasionally hampering the experience. The upside to this is that the game’s developers can regularly be found seeking feedback and commenting on individual issues on the Steam discussion page, showing a clear willingness to rectify issues, concerns and even satisfy simple requests from the fans.

That said, its current $19.99 price point feels expensive at this point in time, given the amount of work still required ahead of release. When the full game does eventually ship in 2018, it’s planned to expand far beyond the confines of Steam, heading to Xbox One, PlayStation 4, Nintendo Switch and even mobile devices. There’s every reason to wait, but those with patience and a hankering for some arcade footie action may just find enough value in the game’s current feature set.

Although far from completion, Sociable Soccer already shows some hints of developing into the game Sensi fans have been waiting two decades for. Time will tell as to whether it can get there, and certainly, it’ll take a lot of hard work to achieve. For now, the game serves as a fun kick about in short bursts. In six months, we’d love to be partying like it’s 1996, transforming into goal scoring superstar heroes all over again.