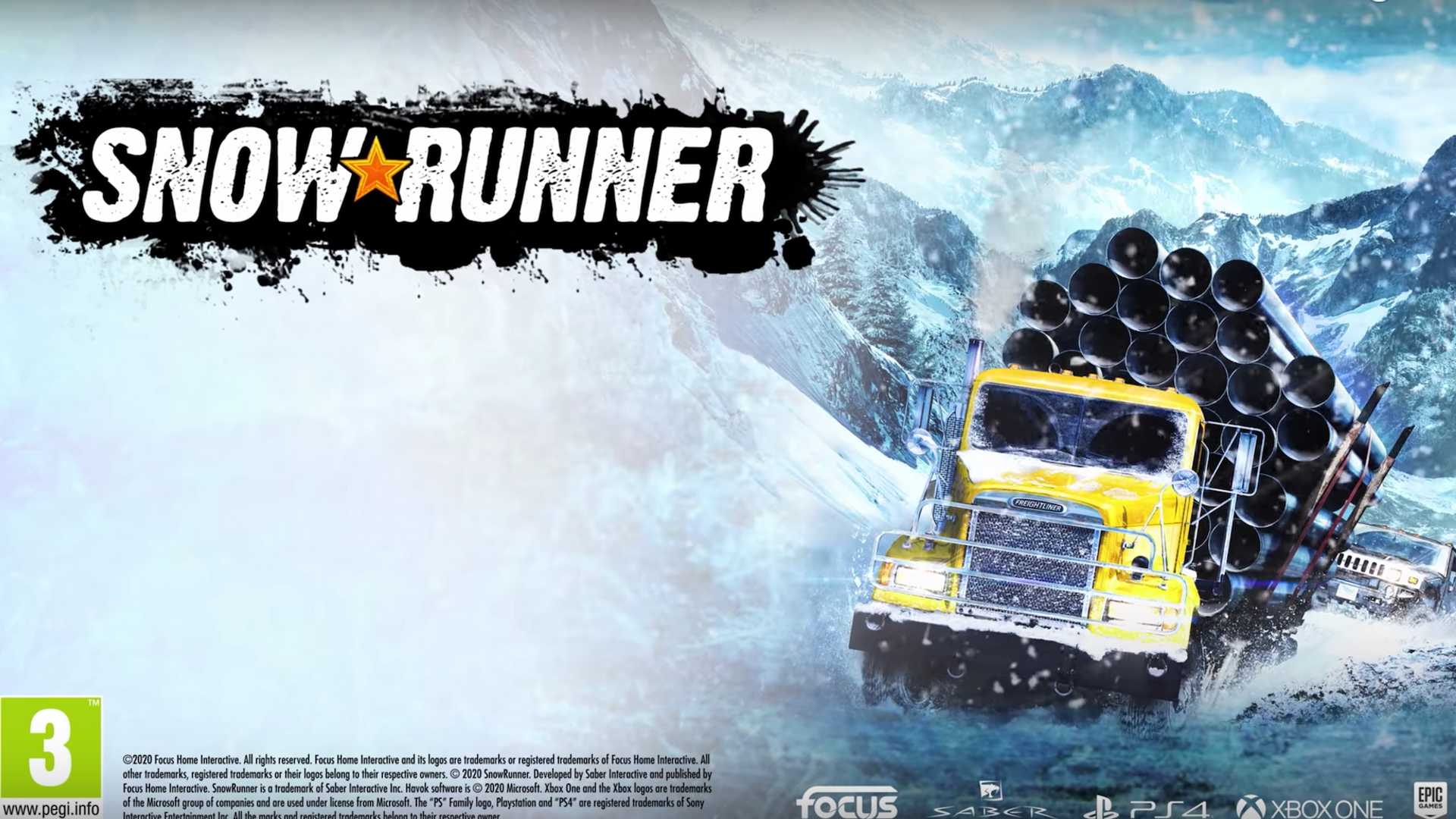 The sports and racing video game landscape are littered with options for very niche audiences, but in the last few months we have witnessed some even more unique approaches hit the market, which has included Overpass, and now SnowRunner by Saber Interactive. What makes both games unique is that the game’s focus is more on the user’s approach and understanding of the in-game task at hand, and less about the user’s ability or skills.

The follow-up to 2017’s MudRunner feels a bit deeper this time around, and Saber has used their experience to deliver a more refined title in the world of off-roading, but is it worthy of a purchase?

From the first moment you fire up SnowRunner, you should notice how pleasant and realistic the graphics are. On top of that, the lighting system being utilized is very good, and both these elements really pour over your screen. Almost all of what takes place in the game happens in smaller towns and mountainsides, and the game does a wonderful job of re-creating that feeling in almost every aspect.

The level of detail on the vehicles is just as impressive, and the weather effects take a backseat to none of it. When you’re navigating through a tough scenario cityside or mountainside and the snow, mud or rain starts to hit, it has an immediate impact on the situation at hand and continues in stages of creating a more difficult scenario throughout. 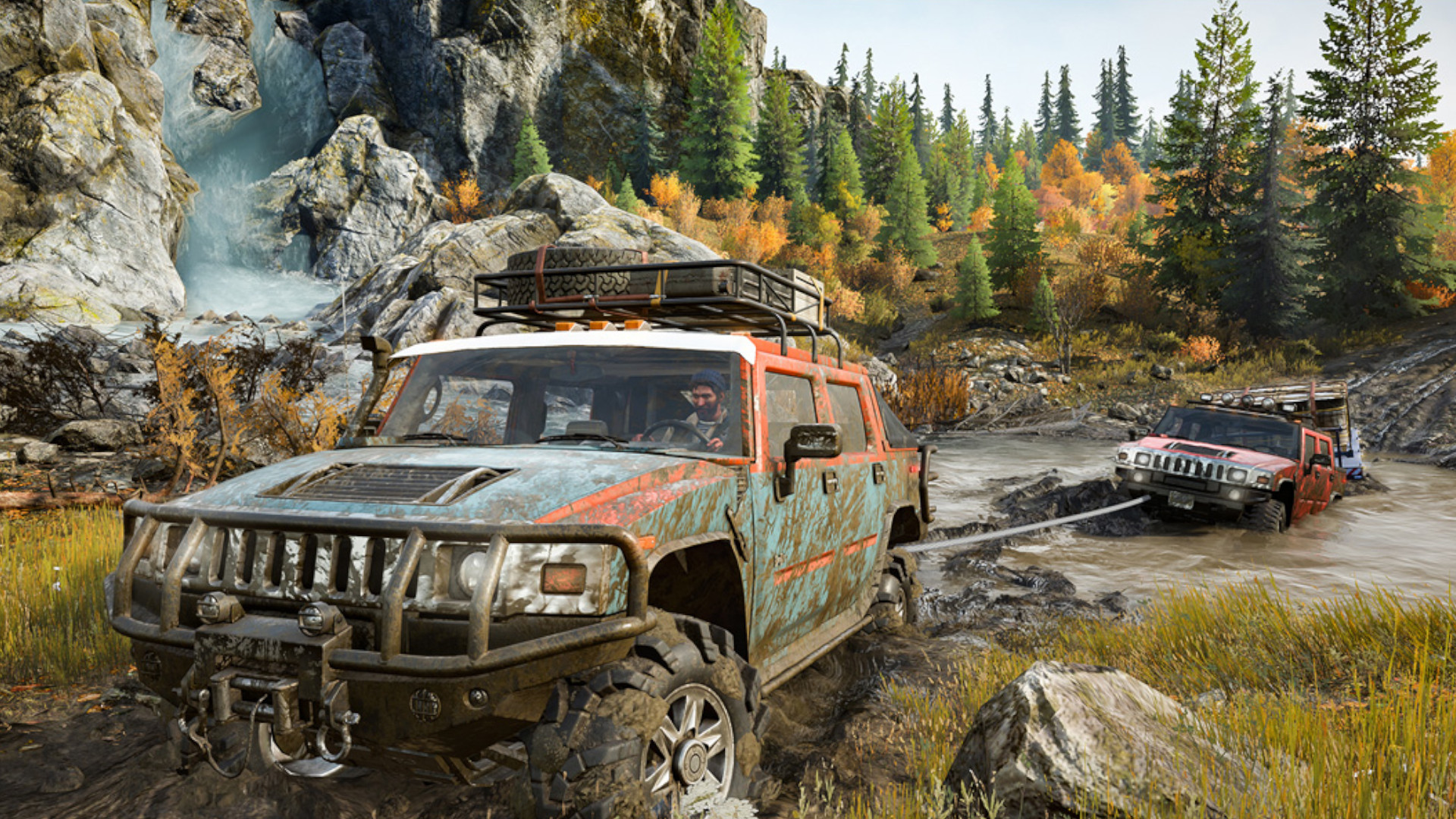 The only caveat to my overall enjoyment of the world that Saber has created is that I wish the towns, cities and mountains were living and breathing with actual life. Right now, the game gives off a feeling like you are wandering through an apocalyptic setting and the revitalization of the area is solely resting on your shoulders. Now, some of this “loneliness” can be mitigated through the co-op feature, but still, it would have been nice to see the world a little more alive.

It is hard to describe the action that takes place in SnowRunner because it’s just not like much else out there — for better or worse. Whether you are in the uniquely different regions of either Michigan, Alaska or Taymyr, the one constant is honing your ability to find the best and safest route to complete your goal(s). It sounds simple enough, but the game is extremely unforgiving and take my word when I tell you that the “reset” will become your best friend.

Frustration abounds, but the game does an amazing job of making you work for the results, and forces you to ponder all scenarios and approaches to the task at hand. Rarely are the goals and contracts easy to complete, and often I wanted to delete the game from my HDD. In the end, though, the satisfaction of completing the tasks at-hand outweighed the frustration that often coincided with them. 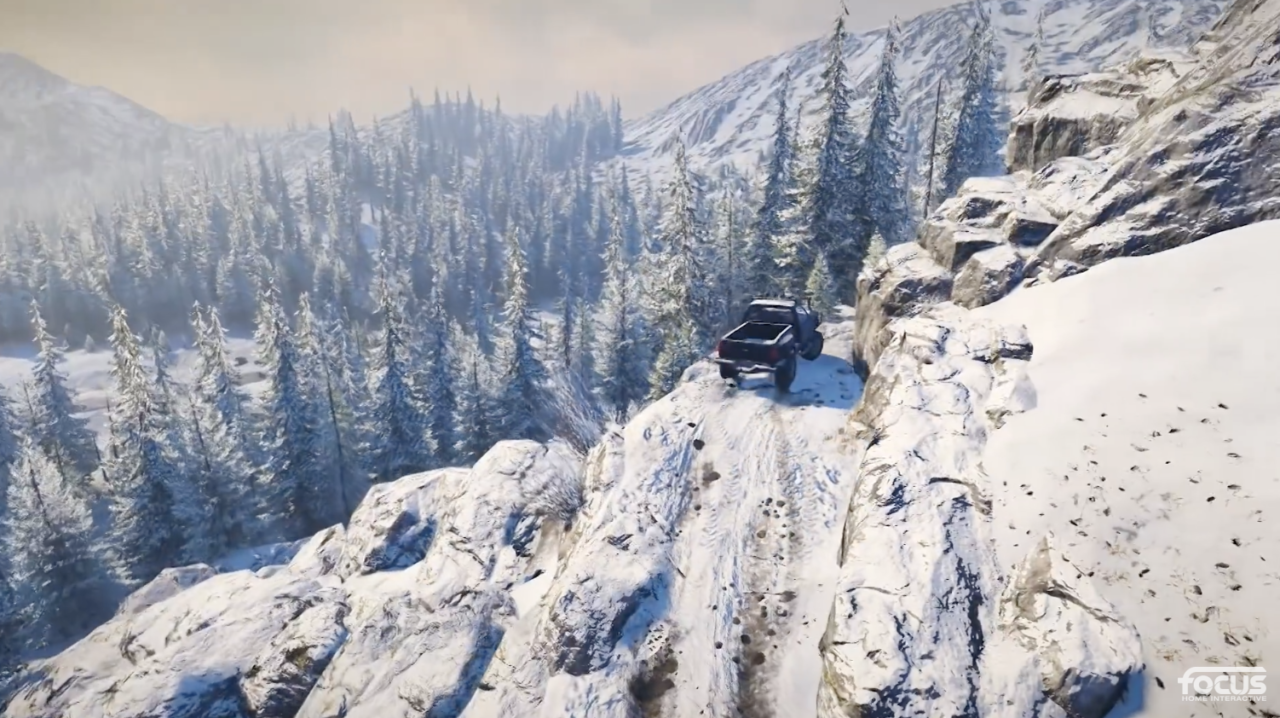 Often, I found myself having to put the controller down, look at the map and decide the best route for my approach. I also found myself switching from low gear to all-wheel drive then back to a standard gear all within 100 feet because the scenarios you find yourself in require this type of quick thinking and “outside the box” approach.

SnowRunner is going to twist you, roll you, smack you and keep relentlessly coming at you with multiple obstacles that force you to adapt and overcome if you want to be consistently successful. Is there anything wrong with that approach? Absolutely not, but please don’t say I didn’t warn you.

I appreciate the challenge that SnowRunner consistently provides, and it’s not always a grind. The challenges make sense and the accomplishment of these tasks helps you unlock new travel ways, new vehicles or upgrade your current vehicles.

Delivering metal beams and wood to help rebuild a bridge, or finding a way to retrieve a fellow truck during a blinding snowstorm may seem mundane and routine as it echoes what we see in real life, but SnowRunner finds a way to implement a mixture of fun, accomplishment and excitement in one overall package.

As difficult and challenging as SnowRunner can feel at times, the one area that delivers a clear path of understanding is in the game’s control system. No matter what type of vehicle you are driving, maneuvering or operating, SnowRunner does an excellent job of explaining what each vehicle is capable of in each scenario. The game also explains how to operate each vehicle and what are the best choices for that vehicle during any number of scenarios you may encounter while inside that vehicle. 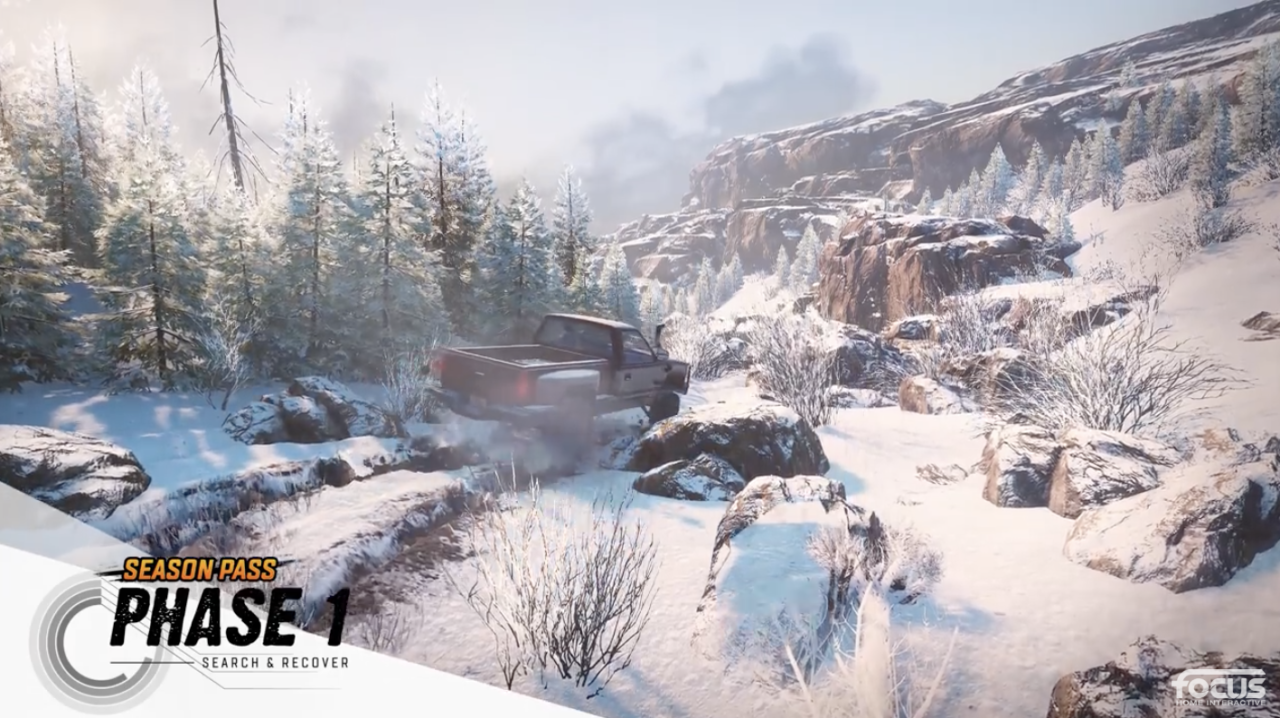 On top of the tutorials and tips that the game provides, it also does an equally impressive job of controller-to-screen control. Meaning what you are trying to accomplish with your controller can be seen in real-time on the screen and feels accurate.

This is incredibly important in a game like SnowRunner because the need for accuracy when trying to navigate the weather or terrain can be extremely dangerous and unforgiving. Whether I was traversing through snow, mud, pavement or any number of the surfaces that SR provides, the control system and feedback allowed me to feel the difference and adjust accordingly.

As much as I enjoyed the controls in SnowRunner, it is worth mentioning that it took me a solid 3-4 hours of gameplay to feel completely comfortable with how the vehicles handle on different terrains and surfaces. The learning curve isn’t what I would describe as steep, but it will take time to understand the nuances for each surface and vehicle interaction.

While the standard camera angles and views actually work very well in SR, there were some issues that popped up for me occasionally when wedged between two mountainsides, or when trying to reverse my truck and latch onto a trailer. The camera issue pops up only when you find yourself in tight quarters, but unfortunately, that is when you need consistency the most.

Is the issue a game killer? Not at all, but it is worth mentioning and at times can cause some unnecessary frustration in a game that is already saddled with that emotion throughout.

What SnowRunner does as a game, it does very well, and I feel confident in writing that. What may be a problem for some is what is offered in the game may tend to become somewhat repetitive in a short amount of time. While the game does offer multiple locations and completion objectives, when looked at in a broader sense, they don’t vary drastically from each other. 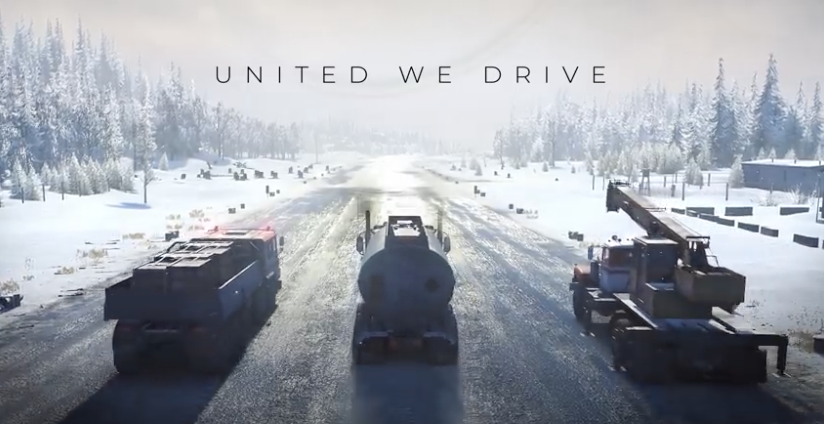 What did help, for me at least, was the fact that many of the missions were time-consuming and offered varying points of difficulty. Because of that, I found myself often thinking about the different ways to complete the tasks, and that helped push each experience deeper and further.

SnowRunner is not going to be for everyone. In fact, I would consider this title to be more of a simulation and less of a sport. It’s really a combination of multiple titles, but in the end, it is a slow-moving, methodical off-road simulation that has a sprinkle of sports and outdoors tossed into the mixed. If you’re looking for a time killer that will test you and your resolve quite often, then you could do much worse than having SnowRunner in the rotation.

It is also worth noting that there’s even more content on the way with the SnowRunner Season Pass, which is included in SnowRunner — Premium Edition. The content will be delivered in four phases, each with its own unique theme and region. The Season Pass will include brand-new vehicles, maps and activities throughout 2020 and beyond. The first Season Pass content drop is expected in the coming weeks, so get ready to brave the tundra and hunt down the wreckage of a lost World War II bomber.