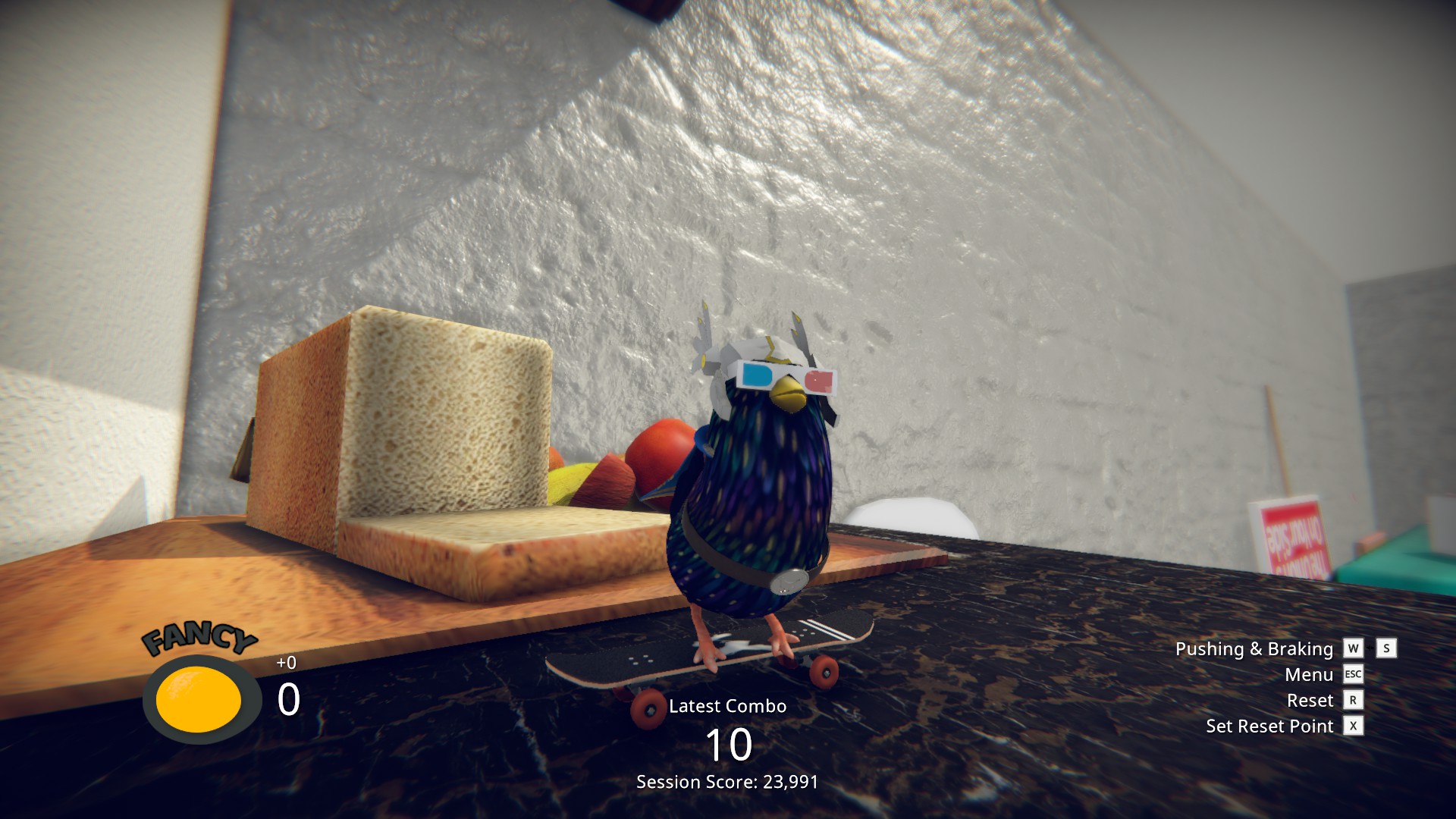 Since the first time I heard there would be a skateboarding video game that would incorporate most of the things I enjoyed about the Tony Hawk Pro Skater franchise — and actual small little birds — I was immediately hooked. But the cherry on top was when I quickly learned that the game quite literally had a Tiny Hawk character. It was perfect. I was in love. I wrote an article earlier this year on the Skatebird beta, which increased my excitement even more.

Skatebird was then delayed a month before finally releasing on PC, Xbox, and Nintendo Switch on September 16. Unfortunately, life got in the way and made writing a review on the game nearly impossible for the first few weeks. But now, with the game fully downloaded on my PC and a fresh patch installed (this fixes a lot of the camera issues), here is my review of Megan Fox’s skateboarding brainchild, Skatbird. 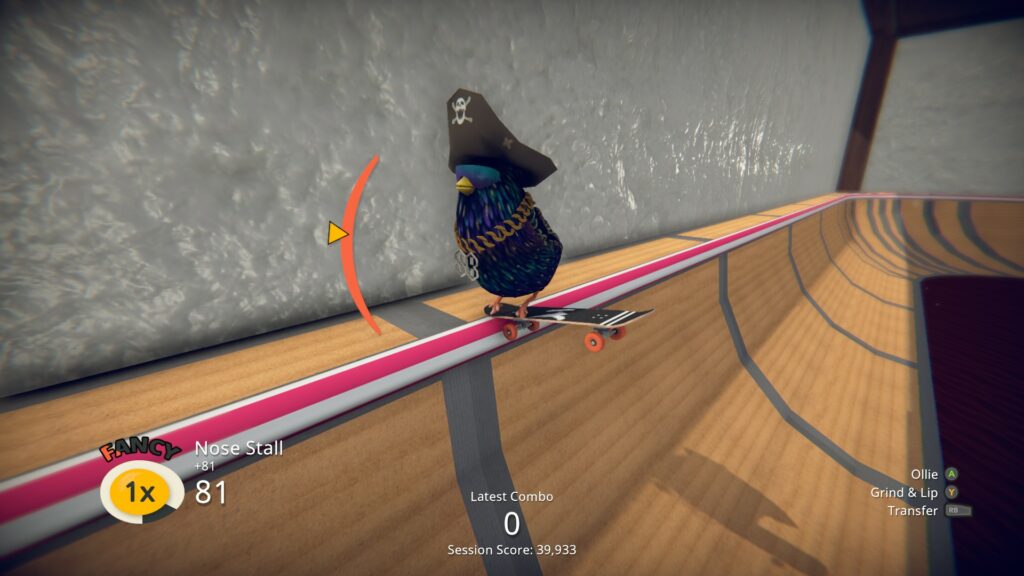 While the gameplay in Skatebird isn’t perfect, it is precisely what you would expect from a game that features skateboarding birds. It’s unique, creative, and fun. The first and most obvious example of this is that your bird can double ollie at any time. This is because a bird has wings and can do things skateboarders cannot. By flapping your wings, your bird gets a competitive advantage that Rodney Mullen never had.

This comes in handy when trying to extend a trick in the air, or quite honestly when trying to get to hard-to-reach areas on the map. I’ve also used it to get specific items like tapes, letters, and snacks. It’s also a bit unusual (in a good way) to see your bird use its beak to grab the board while pulling off a big 720 nose grab in the air.

These are just some of the bird-centric things you may quickly notice in Skatebird. However, it’s the familiar gameplay that kept me wanting to come back for more.

For starters, the controls are as simplistic as I would hope for from a new skateboarding video game. Skatebird‘s controls make for a quick and seamless learning curve for all ages. (I mean this, my two daughters have even played.) And it feels eerily similar to the first skateboarding video game franchise we all truly fell in love with — Tony Hawk’s Pro Skater.

The controls feel similar too. For example, the A button on my Xbox controller pops an ollie, X does a flip trick, Y grinds, and as you could expect, the left analog stick controls your bird, and the right one will control the camera (more on that later). RB will pull off a transfer, and the other trigger buttons will make your bird spin and spin. It is easy to pick up and play.

Cruising around the different environments showcases more of the genius behind the game. Old Thrasher magazines are used as quarter pipes, juice boxes are there to grind on, staplers go together with straws, and anything else a tiny bird could get its hands on litters the environments. This becomes more clear with the story.

The story starts with you creating your fictional bird, and good news, there’s plenty of different options to choose from. Players can choose between other species of birds, ranging from hawks to pigeons, parrots, and everything in between. Once you choose your bird, folks can equip their characters with different accessories like hats, glasses, necklaces, scarfs, capes, and so much more. This is something you can change at any time and, right now, can only be obtained by skating around each level and finding each item on your own. Once you have your bird selected, the real journey begins.

Glass Bottom Games delivers a story mode based on helping your “Big Friend” get back on track after presumably losing a job. Throughout your endless attempt to help Big Friend, which is honestly less of a story and more of a guideline to help you unlock new locations, you will discover new challenges along the way. Some may seem familiar to THPS and others may not. For example, collecting S-K-A-T-E was always a popular one. Of course, you won’t have to collect those infamous five letters, but you will have to collect M-O-N-E-Y.

There are more than a few challenges that will feel similar, and that is a good thing. 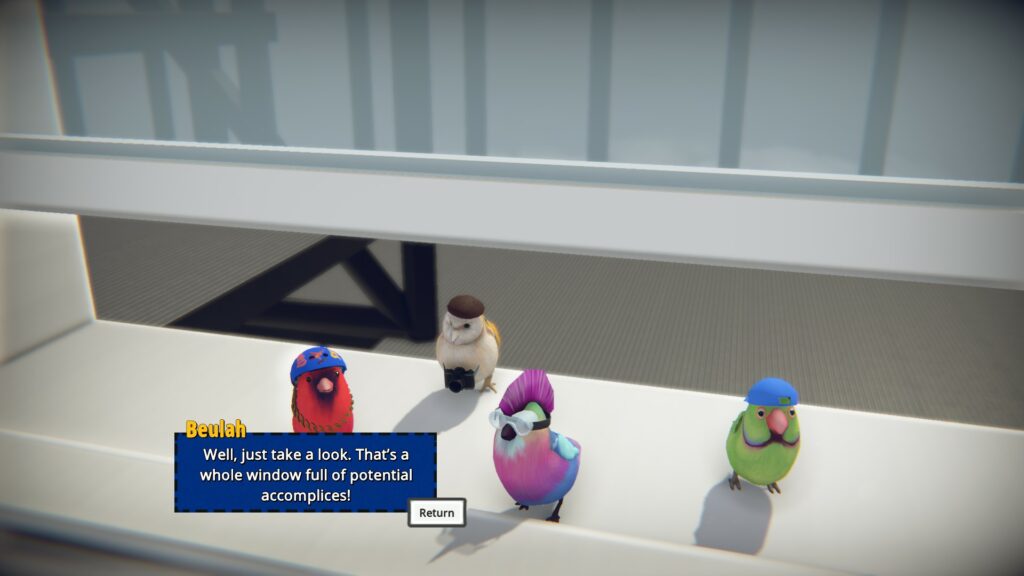 Another thing I really like about the game is the challenges. This includes trick-specific challenges that you must perform at an appointed location. Others may have you trying to accumulate 9,000 points, which isn’t hard when they give you nearly two minutes, and the score tallies up the total of your run throughout. Other challenges include grinding a juice bottle, doing a manual through water stains, collecting snacks, and so much more. The challenges aren’t too ordinary but add enough to the game to make each level worthwhile. But, of course, you can’t just go to a new level and steamroll through the challenges either. It will take time, and finding everything is a challenge I’ve struggled to conquer.

There are five levels in Skatebird, with my favorite probably being the office. You and your bird will have to break in and destroy the server. Another level that I enjoyed — and this goes back to the beta — is the rooftop level. Maybe it’s the different tricks I try to string together as I manual from one rooftop to another, or maybe I like the old cement skatepark feel of it. Whatever it is, there’s plenty to do in each level, and each level brings an array of creative challenges, setups, and environments. It’s also open world, so if you’re like me and easily get sidetracked just know there’s plenty to do.

For those of you who like cute and quirky narrating, this game has plenty of bird puns. Some of the narration made me laugh aloud, while others feel more like a swing and a miss. But as I stated from the beginning, this game is a peacock among a group of seagulls.

One of my biggest regrets when purchasing the game is not spending the extra $3 to get the add-on for the official Skatebird soundtrack because it is excellent. (I also like to support the passionate creators.) The soundtrack features 27 different songs that genuinely add to the game’s lore. Unfortunately, without finding these tracks hidden in each level, you’ll be stuck listening to the same song over and over again.

And while I admit, I would’ve preferred to pay the additional fee, not every track is a certified banger. There are a few that sound like a song you’d be forced to listen to while being stranded in an elevator. There’s also one where the artist does nothing more than narrating facts about birds over a beat. But overall, Skatebird‘s soundtrack is unique and worth the purchase. But then again, I’m the guy who owns every Modest Mouse album.

All I know is I liked it so much that I was okay letting the game run in the background while I went on with my daily chores. So don’t be like me, folks. Instead, spend the extra money (if you have it) and enjoy the soundtrack. 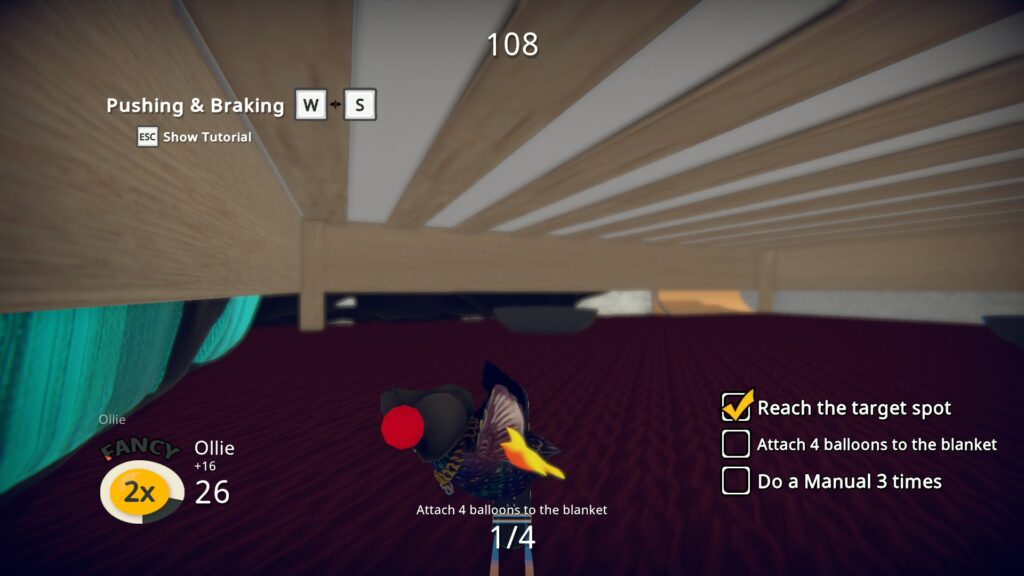 Before I dive into my camera issues, I want to make sure people know they’re doing everything they can to fix the problems. And while it’s still not perfect, I’m happy to report that as of September 27 the camera has been patched, and in the limited time I’ve had to test it out, it’s been much better.

According to the official Steam site, here are the changes that were made to Skatebird‘s camera in the latest 1:03 patch:

“Significantly improved the gameplay camera, and made it much more stable”

A few other minor tweaks were addressed in the update, but overall, this completely changed the way I felt as I was writing this review. Before the patch, the camera was shaky at times, and to be honest; the blurred POV was nauseating too. I can’t say it’s flawless, but this is much better compared to how the camera first played. Even though I still feel like there’s more work to be done, they’re now on the right track.

Before the patch, I may have told you to shy away from Skatebird because of the camera’s flaws, but now I’m much more positive on the title. 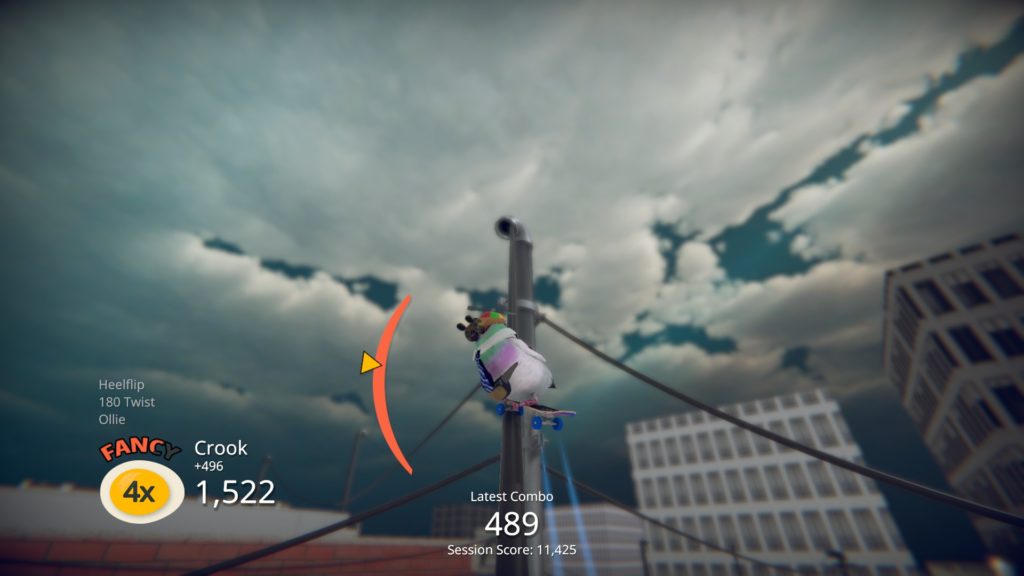 With the camera tweaked, Skatebird‘s biggest flaw might now be the game’s less-than-stellar physics engine. There are times when your bird gives up all hope and slowly starts to lean forward, crashing helplessly to the floor. Other times your bird may nosedive off the board entirely. It’s not a deal breaker for me, but I could see why it could be to some. After all, not completely feeling like you have control over what will happen next is a concern in any video game.

Another issue I have with the game’s physics engine is how it always feels like I’m not entirely in control of how much speed I’m able to muster up. The same holds true when you’re spinning around in the air trying to stick a landing. Simply put, there are times when the physics are wonky, and your bird does things out of your control. Glass Bottom Games embraces these moments by allowing your bird to roll around on the surface. It’s fun and quirky, but when you’re in the heat of the moment trying to pull off one big move after another, the physics can be more than frustrating. 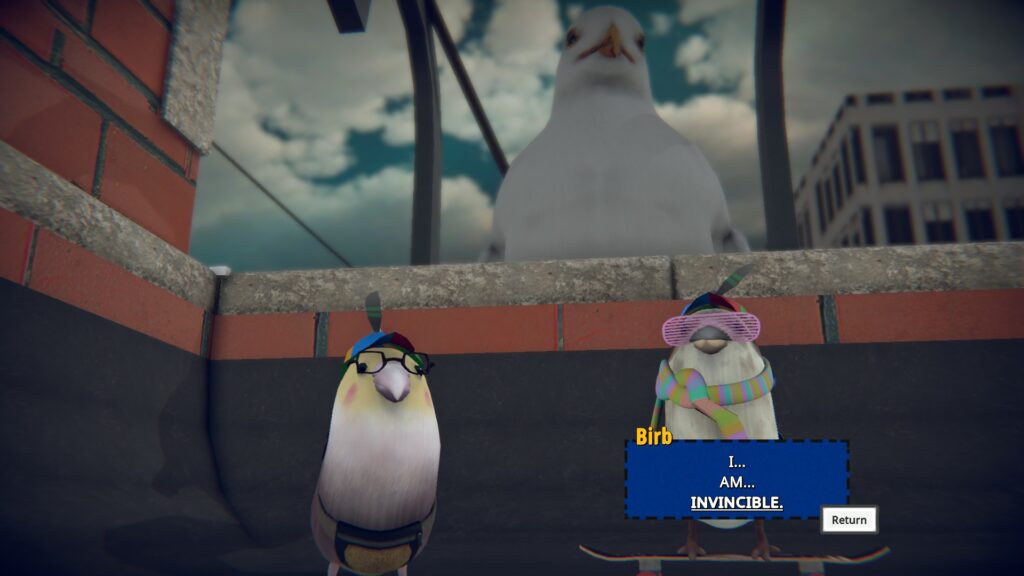 Despite praising the game for the variety of levels, customization options, and array of different missions scattered throughout, I can’t help but feel like after one playthrough, most folks may not have an incentive to come back.

Now, don’t get me wrong, the best part of any skateboarding game is going rogue and trying to string together your own creative line or big trick. But that can only keep people occupied for so long without a ‘highlight’ feature, multiplayer, DLC, or the ability to make your own skate tape.

It also seems like the way the missions are constructed means trying to change the difficulty doesn’t do much. It looks like this can be tweaked by changing the balance and bail sliders. Nevertheless, you have to wonder what surprises GBG has in store for Skatebird as the months progress and Fox’s vision is 100 percent complete.

There’s a lot to like about Skatebird. The game’s entire premise is unique, and I find myself in disbelief at how well Glass Bottom Games was able to pull off a skateboarding video game with birds at the center of the story. However, there are some concerns about the game. The physics engine can be wonky at times, and up until recently, the camera was downright nauseating. But if you have read any of my stuff before, you would know that I enjoy skateboard video games a lot.

I understand why some may be perched on the fence like Tiny Hawk, and maybe you are better off waiting for the holiday sales and the physics to improve. But I’m easy to please, and Skatebird is exactly what I expected. Sure, there are some frustrating moments, but it’s a creative representation of the sport I love. It’s fun and quirky. And with a quick learning curve and by paying homage to one of the greats, I think most folks could enjoy this arcade skater.