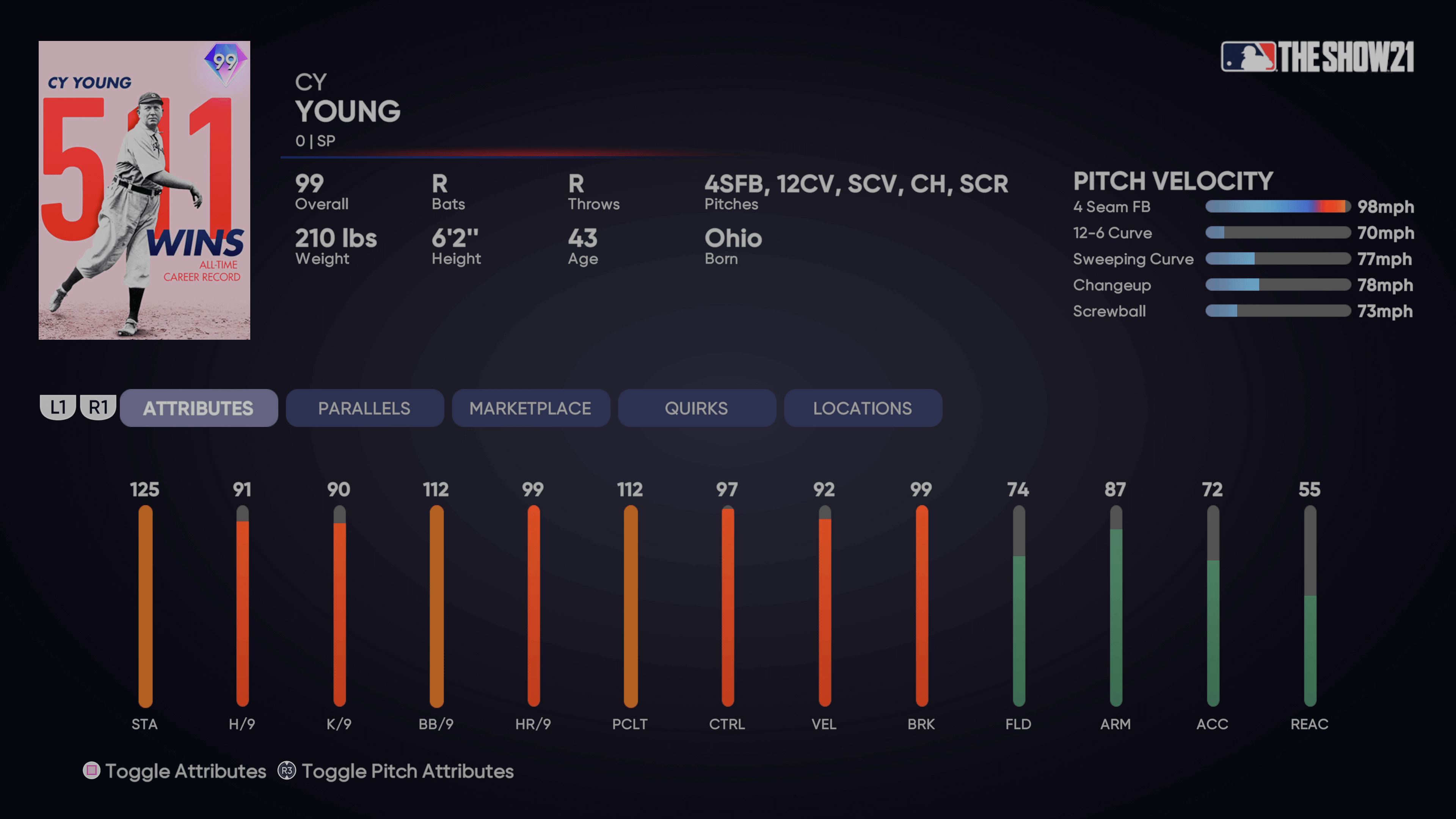 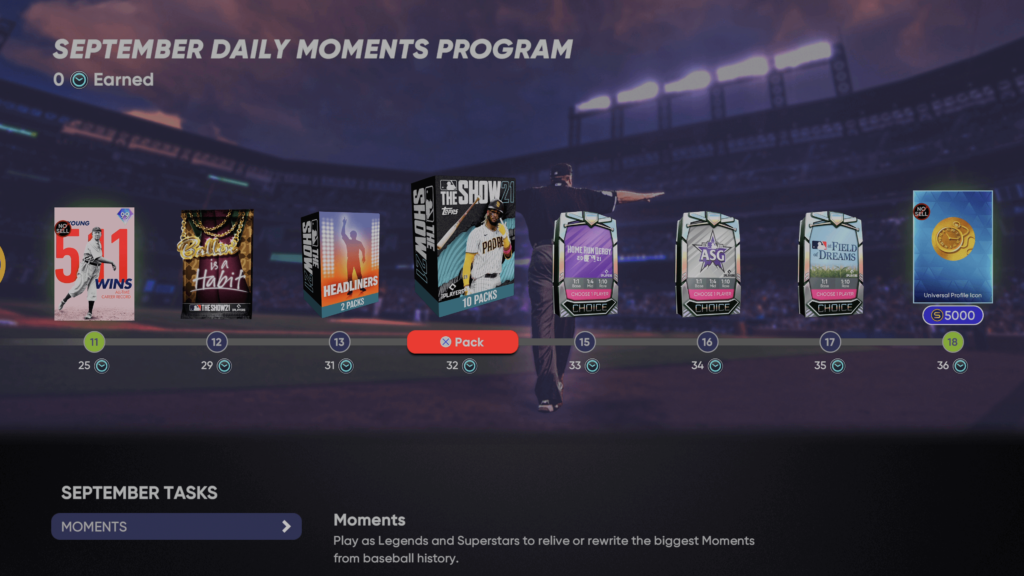 The points system for the September Daily Moments program can look a little odd because you’re chasing certain checkpoints that don’t seem attainable on the first of the month. As of now, there are more points than days in the month. However, you need to realize sometimes a daily mission will be worth two points rather than one, which is why there are more than 30 points in the program. Regardless, you should be able to snag all the cards by logging in and doing the daily mission a majority of the time.

Milestone Cy Young of course has 125 stamina and a high-90s fastball. You also get two loopy curves, a screwball, and a changeup. He has a 91 H/9 and basically relies on keeping people guessing. In theory, Cy Young seems like he should be good because the two curves and screwball all break different ways, and then he has a 78 mph changeup with a 99 mph fastball. However, in practice  Cy Young usually isn’t quite that good because either people just always sell out waiting on fastball, or you have to hope people go out of the strike zone because his pitch mix is varied but too similar in speed. He essentially has a fastball and then four pitches that sit between 70-78 mph. He basically needs one more pitch that sits in the high 80s or 90s to really balance him out against top competition. Perhaps this version will surprise, but I’m doubtful.

Signature Series Johnny Damon is the prize for me because I just like hitting with Damon. His swing always feels good, and he’s got good contact and speed. The arm is obviously a problem, and the power is nothing special, but he’s someone I will play more than I should even though there are much better options.

Awards Orlando Cepeda brings even better contact and power skills to the equation, but his stance can be hard to get used to. If you can conquer it, then you’re still using a slower player with terrible fielding, but he’s got pretty high-end contact skills to go with 100 vision.

After you acquire the Rookie Johnny Damon, you can then transition to the player programs tab to scope out the path for evolution. 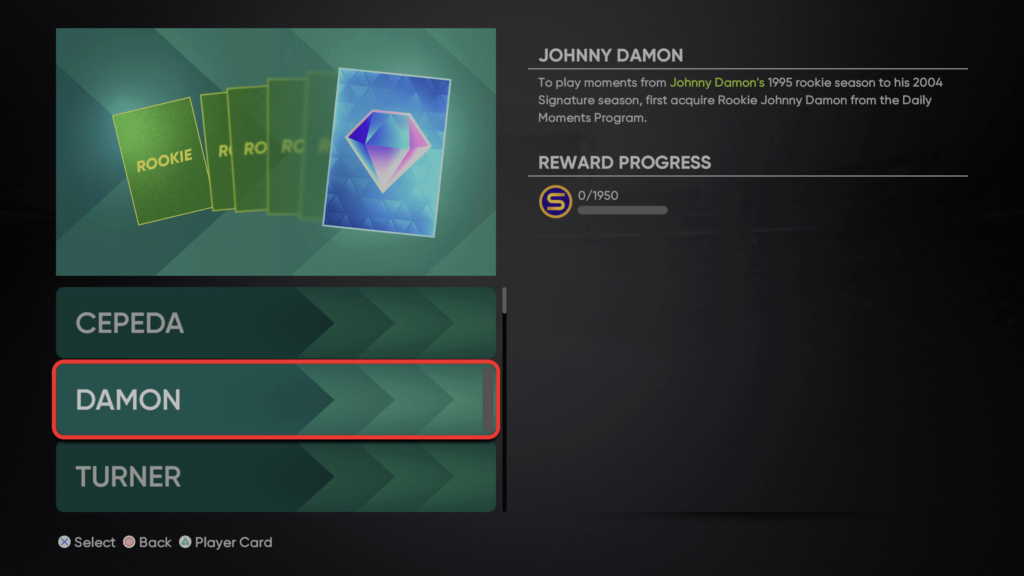 Each moment is worth 5 points.

After you acquire the Rookie Orlando Cepeda, you can then transition to the player programs tab to scope out the path for evolution. 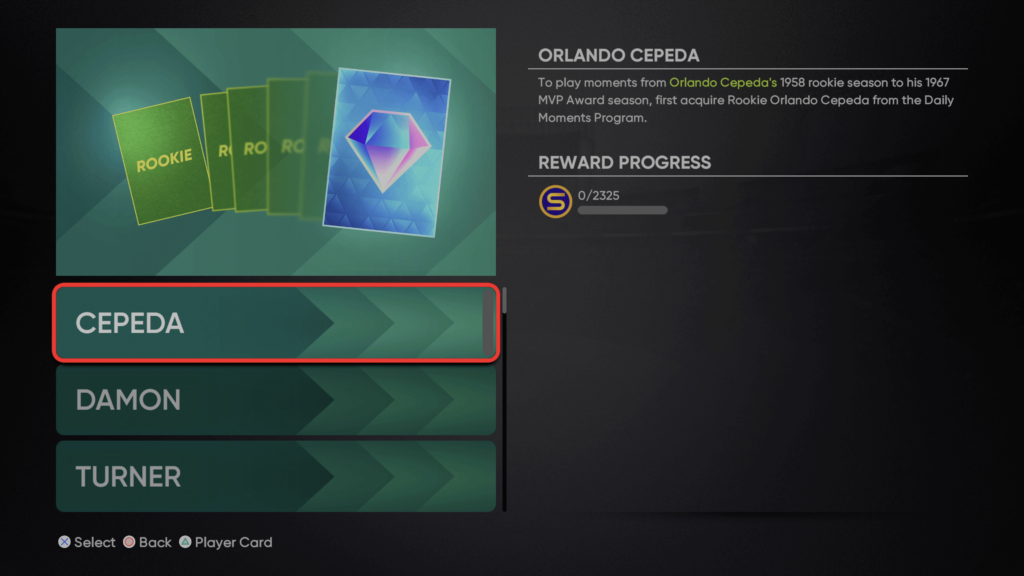 Each moment is worth 5 points.

As expected as we get deeper into the season, this is the best month yet for the Daily Moments program. I’m not in love with using Cy Young because his pitch mix is just one fastball and a bunch of slow stuff around the same speed, but a Milestone card is a Milestone card. Signature Series Johnny Damon really props up this month’s haul for me, and Cepeda is solid if you can handle his stance. However, getting three premium choice packs is probably the biggest draw here. Now, perhaps by the end of the month the HR Derby pack, All-Star game pack, and Field of Dreams pack will all be in higher supply and not matter as much — the new Team Affinity program launching on September 10 also needs to be factored in here — but as of now those packs are a big perk of the September Daily Moments Program.