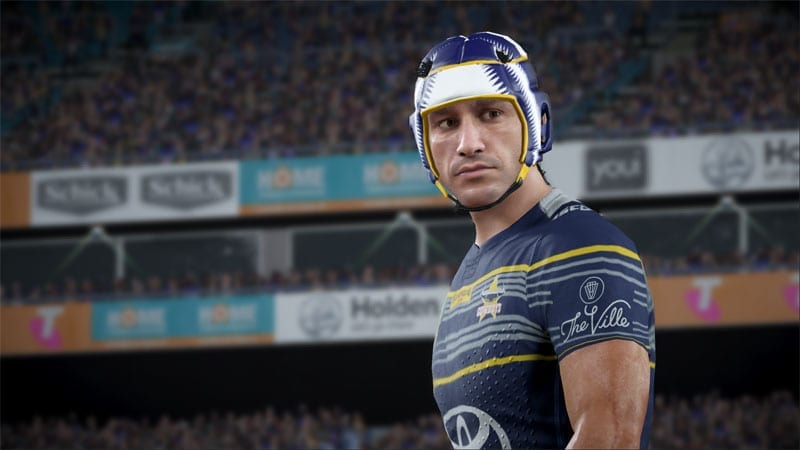 Big Ant Studios is no stranger to the world of rugby. With their fourth iteration of Rugby League Live under their belt, Big Ant Studios has set out to replicate the tough, physical game in a way that hasn’t been accomplished before. The million-dollar question though is how successful are they?

Capturing the essence of a sport’s gameplay is always tough, especially true for non AAA titles, but Rugby League 4 does a fairly decent job at replicating the essence of a rugby match. From the start, the new layered kicking meter is a noticeable upgrade from year’s past. While it takes a lot of practice to master, the level of control you have in the kicking game is greater than ever. Once past the opening kickoff, the action settles into a familiar pattern, albeit with some improvements.

The quick on-the-fly tactics (up on the D-pad) give a new tactical dimension but the basics — passing and tackling — are simple and effective. The quick “best option” passing (LB/L1 or RB/R1 depending on the direction you’d like to pass) is effective, and if you like more control holding the pass button and pressing a face button allows you to choose your best option manually. Flat Passing, which allows your receiver to run onto the ball, is best used in certain situations, and in my opinion, towards the touch-line as there are less defenders there to intercept the ball. Get it wrong though and an interception could be costly.

Once you receive the pass, or play a quick start, the player movement is hit or miss. Jukes are pretty effective and momentum is respected with respect to player attributes. Defensively, without the use of controlled movement (LT/L2) tackling can be very difficult as foot planting isn’t really respected. Tackling, whether it be solo or with multiple players, is simple, relying on the left stick to get near the ball carrier to automatically trigger a tackle. Once you have the player wrapped up, the job is not done though as you can drag players or halt their momentum with the right stick. Ankle taps are pretty effective when the ball carrier gets behind your line and you’re on the chase, but if you time them incorrectly you will get goose stepped.

One of the new features is the “Foresight” meter. By pressing down on the D-pad, your players’ and opponents’ strengths and weaknesses are displayed in a thermal-like imaging map. I’ve found this to be a pretty effective tool at targeting tired defenders who aren’t fleet of foot when fully rested.

Overall, the gameplay is solid yet unspectacular. The controls can be a little bit overwhelming with the combination of button presses, but I suspect that with more time they will become second nature. Despite watching several tutorials (the in-game tutorial doesn’t offer much) the new kicking meter really takes some time to get used to, and in the meantime has become the biggest weakness in my game. Additionally, the big hit controls feel a tad overpowered and almost always causes the ball to be ripped away, especially by the CPU on higher difficulty levels. A gameplay-focused patch could address some of these issues, but it remains to be seen what kind of post-launch support Rugby League Live 4 receives.

For a non-AAA game, the visuals are pretty impressive. Stadiums, both those already in the game and those created, are well crafted, but it’s the player scans that really shine. I’ll be the first to admit that my knowledge of players across the various leagues isn’t the best, but the players I do recognize look spot-on, down to their tattoos. Player models are well done even if the average professional rugby player looks like a carbon copy of their teammate, minus the height differences of course. The pitches are replicated fairly well although field degradation is missing. The commentary flows pretty well and is dynamic. Within my career, I have heard different commentary lines pertaining to certain situations/storylines, mainly me not making it out of my pool after losing the first two matches of the Auckland Nines.

Presentation is hit or miss. Cheerleaders are there and showoff their moves after a successful try as well as mark your entrance to the pitch, which is also accompanied by a little pyrotechnics. In-match stats are also included and generally are displayed at the proper time. Despite this, the presentation is a little predictable and can get stale in a hurry.

Online is surprisingly good for a title of this magnitude. I had no issues finding a match, and in the handful of matches I played lag was virtually non-existent. While I have no idea what country my opponent was from, I was happy that the passing and kicking game didn’t suffer in the lag department. Also, the ability to take your created players/teams online is a cool feature even if it can result in you matching up against super clubs. A filtering system would be nice to prevent this from happening.

If there’s one area that this game really shines, it’s the FanHub. Here users can create players, clubs, stadiums, etc. Not only can they be created, but they can be shared. Think College Hoops 2K Share. Any game that allows for a community to edit things such as rosters is a huge plus in my book. The possibilities are endless and the community has some dedicated users out there producing some high quality and creative options. Pro Evolution Soccer, take note!

Career Mode returns and offers three choices, “Star Player – take control of an existing player”, “Rookie Player – create a player”, and “Coach – Take control of a club”. Very similar to FIFA and PES, Rugby League Live 4 gives you control over sponsors and roster management while adding in a little RPG flavor with “Boosts” available before matches. Even the career mode menus mirror FIFA, which isn’t necessarily a bad thing but some areas such as “News” could use a little more fleshing out. In my experience, the developers could borrow a bit from other sports titles. The ability to switch clubs/leagues in “Coach” mode would be a welcome addition as would a realistic progression/regression system. Another aspect I found odd was the omission of the ability to release players midseason. Lastly, I ran into some issues with the camera panning away from the action during a Career Mode match. Based off the ongoing commentary and clock, I could tell the play was still ongoing but was unable to see the action. Unfortunately, this bug only seemed to occur during this specific mode. Lastly, some users have run into issues using their custom squads within Career Mode resulting in duplicate players, skewed ratings and other bugs. While I personally haven’t run into these issues, mainly due to using the default rosters, the sense from the community is that this issue negates the great benefits that the FanHub offers.

If soccer is considered a niche sport in the States by some, then Rugby is a few notches below it. That’s not in any way, shape or form a knock against the sport, just the reality in which we live in. Picking up steam in the States is going to tough, especially at a price of $59.99 and released shortly before Madden. Rugby League Live 4 is a solid title, and for someone who wouldn’t consider themselves a huge fan of the sport, I can say that this game has been fun to play and has piqued my interest in the sport. Now, is this enough for someone to pull the trigger on a game with a pricepoint in-line with Madden and NBA 2K? Probably not, and I think Big Ant Studios might need to rethink that. All in all, it’s a solid effort but not worth the price. If you’re on the fence, I would wait until the price drops some and then give it a try.