If you’re an older gamer like myself, then most likely you have fond memories of EA’s SSX or Dave Mirra Freestyle BMX from the now defunct Acclaim. Other games like Activision’s Tony Hawk series obviously come to mind as well, but the most obvious comparison is to Steep, another Ubisoft title that came before Riders Republic.

What do all these games have in common? They were big on action, had a solid control system, and made the user feel like they were part of the action unfolding on the screen. That brings me to the latest effort from Ubisoft. Riders Republic takes a bit from all the games listed above, tosses in a bit of Forza Horizon, and tells you to go out and have fun in myriad ways.

With that said, let’s discuss whether or not Ubisoft was able to pull this off in this Riders Republic review.

When I fired up Riders Republic for the first time, it gave me two control mechanics to choose from.

One was deemed a beginner’s path, and the other was described more as an option for the experienced. I had to prove myself over a period of time to unlock the “Trickster” method (in other words, the experienced option). Until then, I was relegated to using the “Racer” method (beginner option), but it was for the best.

The Racer method is built for speed and quick button combos, and the game is still extremely enjoyable with this approach. If you really want to get into the guts of the tricks and have access to the full spectrum of what’s available, work to unlock the “Trickster” method and head to the Tricks Academy to get your grab on.

Aside from the two different control schemes offered within Riders Republic, the game does a solid job of giving the user full control, regardless of the type of racing equipment you’re rocking. For myself, I loved tricking it out on the snowy mountains on my board or skis, or cruising through the air with my rocket wings.

The bike was a different story in some regards, but that’s not to say the bike controls were implemented in an incorrect manner or were not fun. When I was on the bike in Riders Republic, it gave me an incredible sense of control and made me feel like every single movement was driven by my actions, which is good. 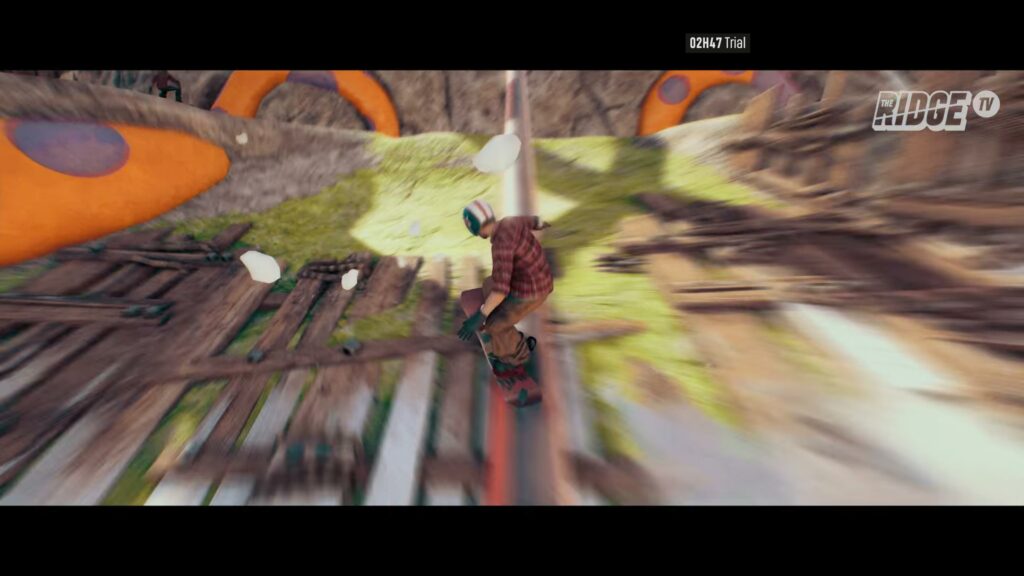 The only real issue I had with racing the bikes related to the rocky terrain or when going down a mountainside. I thought the collision detection was spotty at times, and this was somewhat exacerbated by the the ever-present gathering of humans at the first turn on every track. I’ll touch more on this aspect later in the review.

Regardless of the issues I occasionally encountered while on the bikes, Riders Republic does an awesome job of giving the power to the users and telling them to impress the audience.

Riders Republic isn’t perfect, and at times it can be a little frustrating, but what it does right (which is a lot) it does really right. Part of what is right is the path the developers have taken to give the users the freedom to approach this game however they want.

At any time, I could log on and push the story and my character further, just mess around riding around the map, enter competitions against real people, play against the AI, or just practice on perfecting my skills at the Tricks Academy. My gaming habits change drastically from day to day, and Riders Republic respects and understands that. 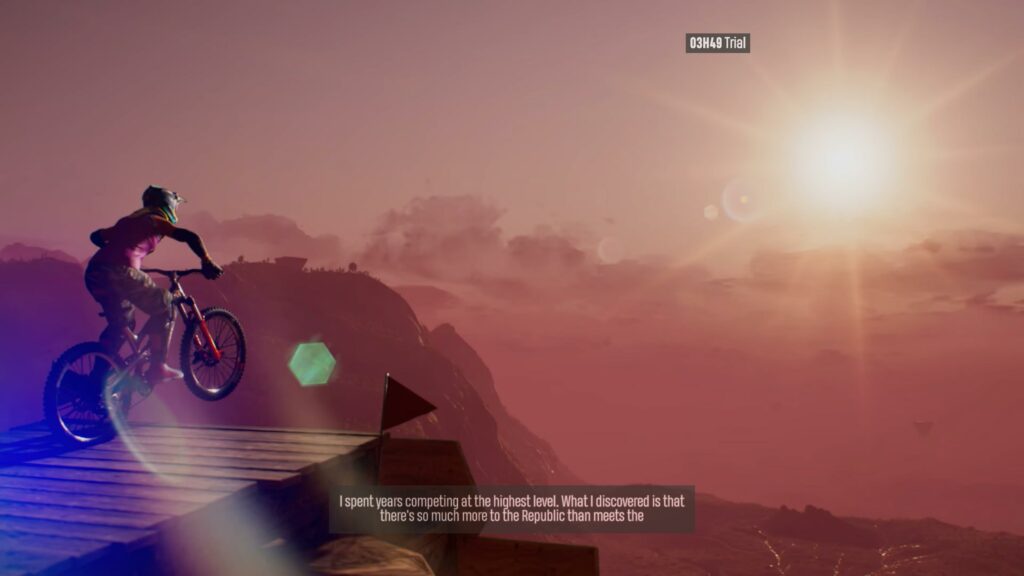 I have an amazing appreciation for what Ubisoft has delivered here as it took real thought and effort to create an open world that gives me the flexibility to approach it in different ways.

Having the ability to practice tricks in an extreme sports title is nothing new, but the experience in Riders Republic is so enjoyable and useful that it could almost be its very own game mode.

I have spent hours and hours in the Academy practicing tricks, working on combos, and perfecting my landings. I have invested in this area to such a degree that I’ve become reliant on it. At the start of each session, I visit the Tricks Academy to get my feeling and timing back.

With the way the Academy is designed, what you learn there carries over into the actual “normal” game. It does this so well that I started to visualize repeating what I was practicing on certain courses that were giving me trouble. 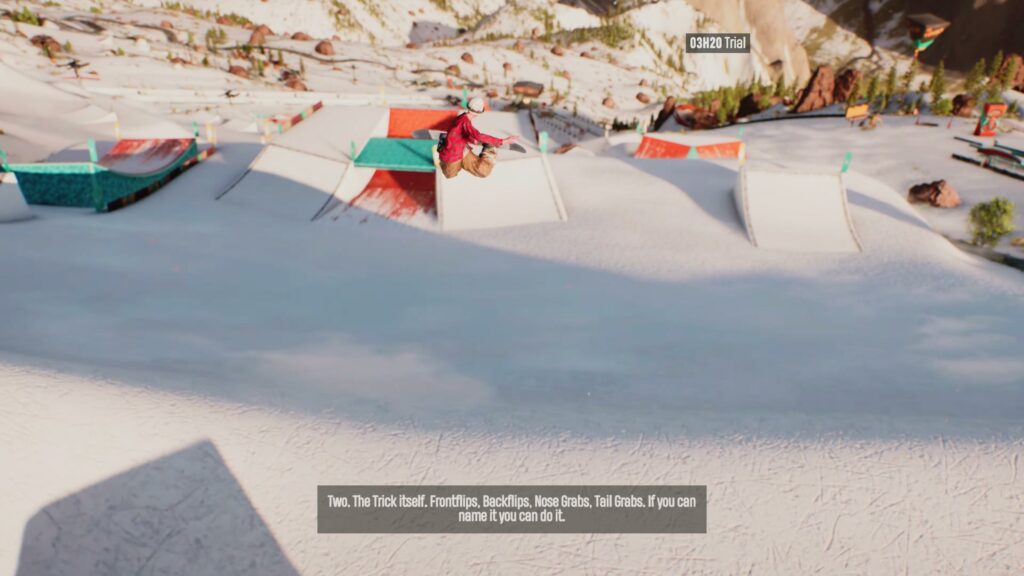 The ability to have the Tricks Academy always at the ready is an awesome element, and it is an area that I still utilize even after many days with the game.

I am not going to spend a ton of time breaking down the storyline that sees your created character navigate their way through the game while gaining a reputation, earning, cash, and reaping rewards.

What I did enjoy about it though is that your character’s growth is not tied to the story at all. Riders Republic took the thought of linearity, tossed it aside to a large degree, and let me decide how I wanted to progress — including my expertise and at what time I wanted to focus on something. 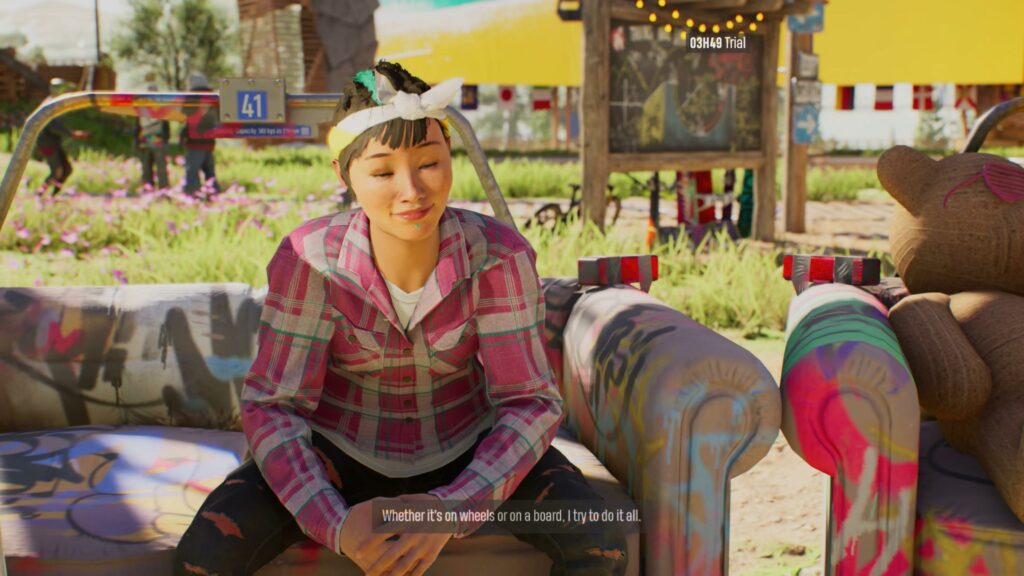 Riders Republic never forced me to take a path that was deemed necessary to see the story continue. Instead, it placed the story arc of my character in my hands and let me choose how to level them up.

The one caveat to all this praise is that early on the game does throw a heaping level of “this is how things work” at you, but it is concealed in a way that feels acceptable and tapers off rather quickly as you progress. 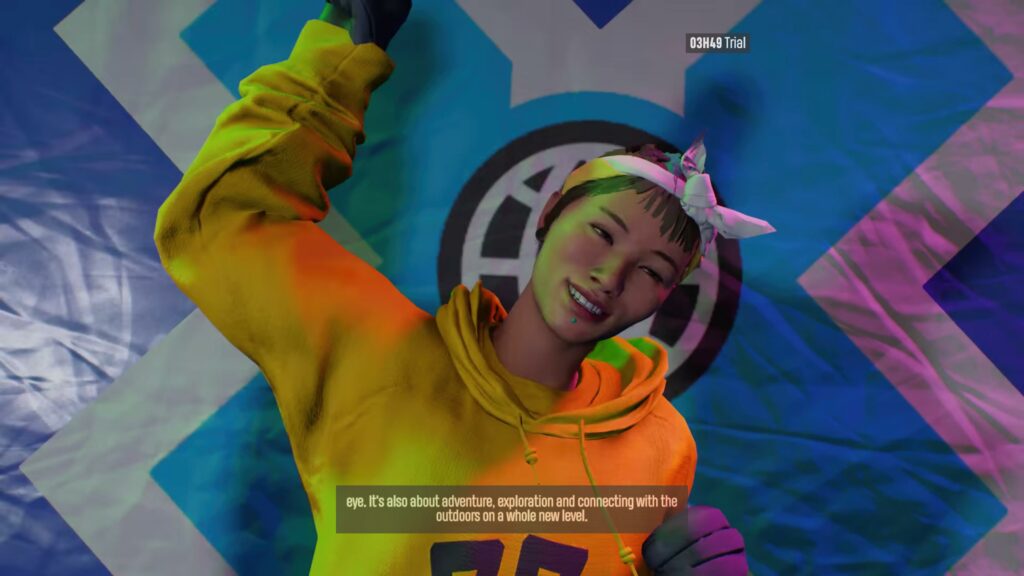 So many games throw this deep story at you, and it feels almost like a burden and a test to see if you can recall all the information that comes at you at a high rate of speed. To me, that lessens the impact of it and forces you to approach it a specific way or miss out on the full experience.

Riders Republic does what is necessary early on and then hands the controls over to you.

I found the experience to be occasionally frustrating as some collision detection made zero sense, or sent me on a path that by the laws of physics could not happen in real life.

During downhill bike races, the collective “gathering of the masses” would impact my trajectory, and I had no idea what to change in my approach to help mitigate this going forward. The control scheme combined with the sense of speed and occasional poor collision detection with track-side objects caused a decent level of frustration. I don’t mind losing, but I hate losing in a fashion where I feel like I had little control.

With that said, I had almost no issues while on skis, snowboard, or flight suit. The issues — and there weren’t many — typically happened during downhill races or while manually navigating myself to the next spot on the map.

The easy part of Riders Republic is grabbing that first bike and hitting the path for the first time, and if understanding the game at a remedial level works for you, then you are good to go. 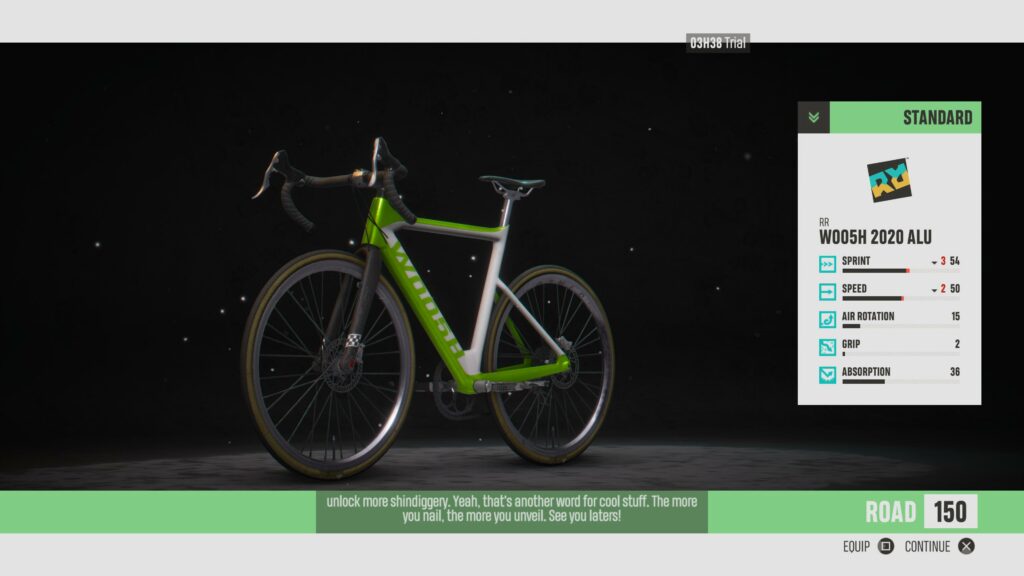 The issue for those who approach the game this way is that the depth of tricks and controls offered here truly take a healthy level of time and commitment in order to get into that flow to really vibe with the game on another level.

I don’t mind this level of commitment, but I do this for a living. Just know that to really get the most out of Riders Republic, it will require time, practice, and patience. 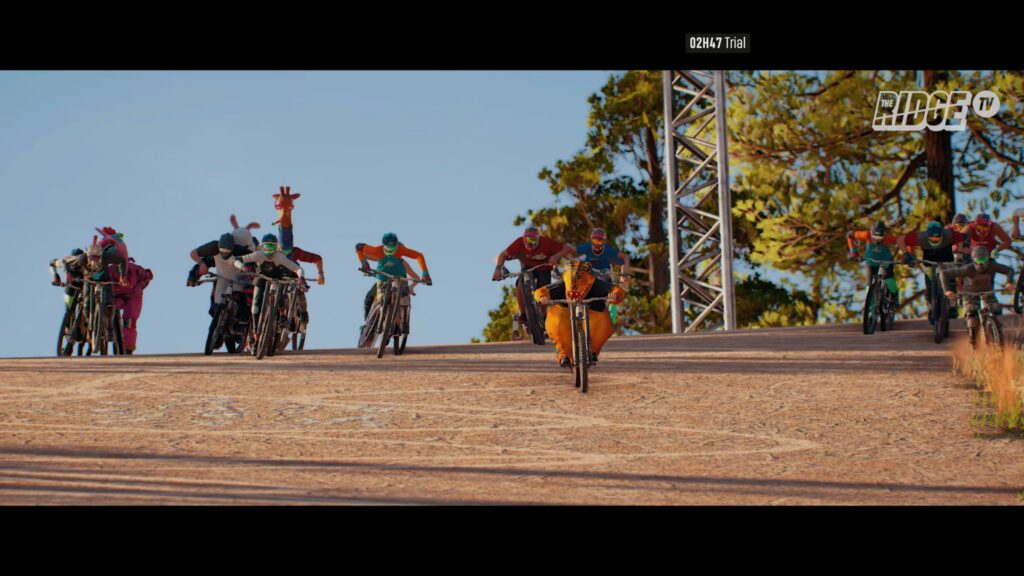 Of course, the saving grace is that the “Tricks Academy” is so easy to access that I was able to dial in my skills, timing, and combos. As I mentioned above, for those who want to take on the depth of what Riders Republic has to offer, the Tricks Academy is almost a must.

As I mentioned before, Riders Republic conjures up memories of extreme sports titles from the past, but it also does an excellent job of being its own game for a new era. Not every aspect here is going to be for everyone, and that’s fine because it doesn’t have to be. What it offers is an open-world sandbox for people to play and enjoy without a bulky storyline.

Riders Republic lets you play how you want, when you want, at whatever pace you choose. Since our gaming habits tend to vary from time to time, that is an amazing approach. Riders Republic is a throwback for the modern gaming world, and it’s one that can be picked up and enjoyed today, next week, next month, or next year. Ubisoft took what Steep started and made something even more worthwhile this time around.