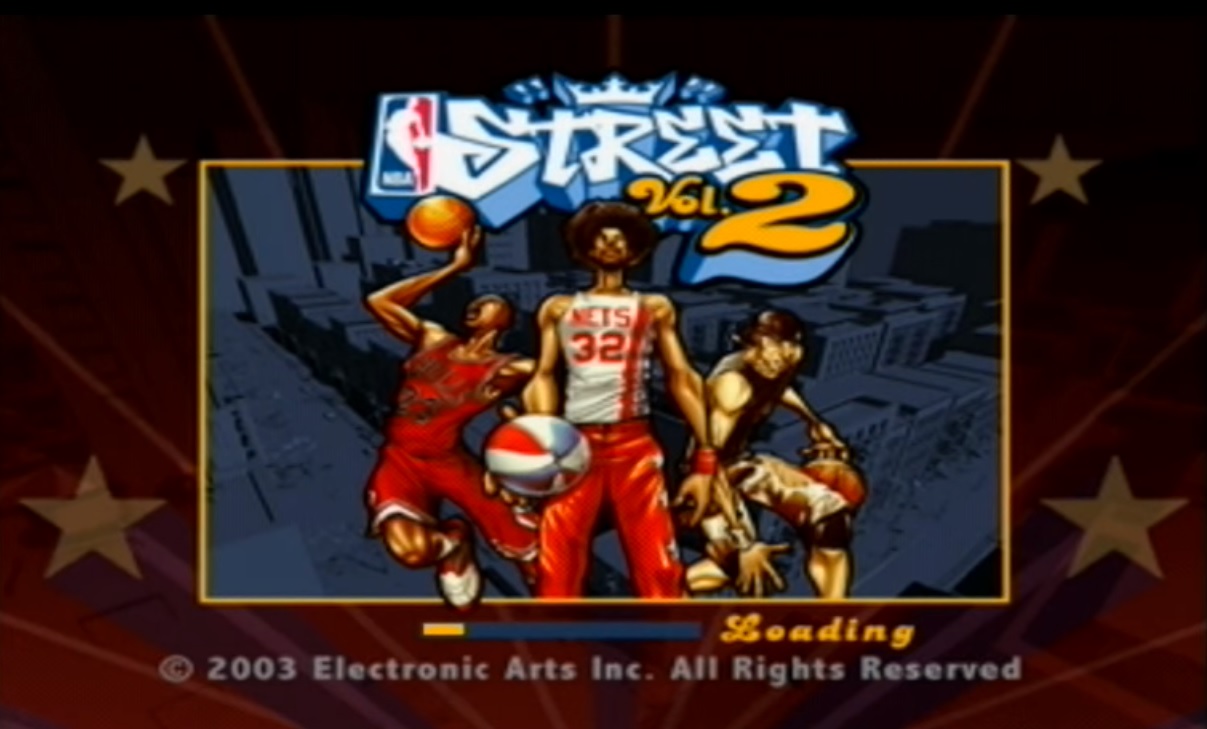 There are very few video games that stand the test of time as “works of art” but NBA Street Vol: 2 is one of them. This is an evergreen piece of sports gaming history, one so unique in style and presentation that it lives on as a masterpiece almost two decades after its original release.

NBA Street Vol. 2 is essentially the successor to NBA Jam — a vibrant, lightning-fast basketball game. If you’re looking for simulation basketball, look elsewhere. Street 2 is free from such trivial things as physics or gravity. Instead, Street 2 is a love letter to the aesthetics and athletic achievements that define the sport, and a genuine celebration of the art of basketball. 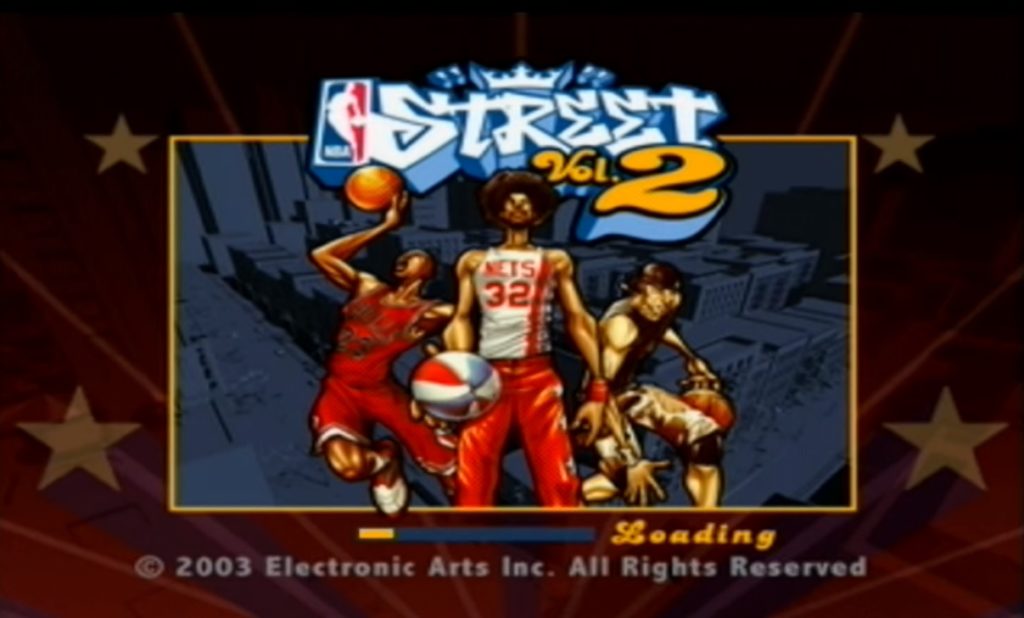 Street 2 features (mostly) 3-on-3 games played to 21 points. Two-point shots are worth one point and three-point shots are worth two. This could also be considered a weakness in a way because we know how inherently unfair this system of scoring is at this point, but hey, this was mostly before our numbers revolution in sports.

A “Gamebreaker” meter (shot that takes a point away from the opposing team if made) fills by stringing together fancy dunks or crossovers. When full, players have the option to use their Gamebreaker, or save their Gamebreaker for an unblockable Gamebreaker 2. Gamebreaker 1 and 2 add a fun wrinkle to an already-addictive game, but if all of that sounds too annoying or confusing, players can also choose to turn off Gamebreakers altogether.

The dunk/trick move system is genius. There are four different levels of dunks/tricks, which correspond with the “turbo” or sprint buttons — the four top trigger buttons on PS2. By holding down either one, two, three or four turbos, the player will do a move of the corresponding level. Every different combination of turbos does a different move. For example, if I am driving with Vince Carter, and I give it an L1/L2/R1 (three turbos) + O, all of a sudden I am flying through the air for a level three, 360 windmill dunk atop Shane Battier’s stupid Duke face. If I give it an R1/R2/L1 (again, three turbos), it becomes a different level three dunk — still powerfully flushed atop the stupid Duke face of Shane Battier.

Street 2 is an easy game to pick up and play, but there is a depth to the control system that rewards familiarity. It’s almost like a basketball version of Smash Bros, in that there are so many different strategies and techniques to explore that players never stop learning and piecing together their own personal styles. 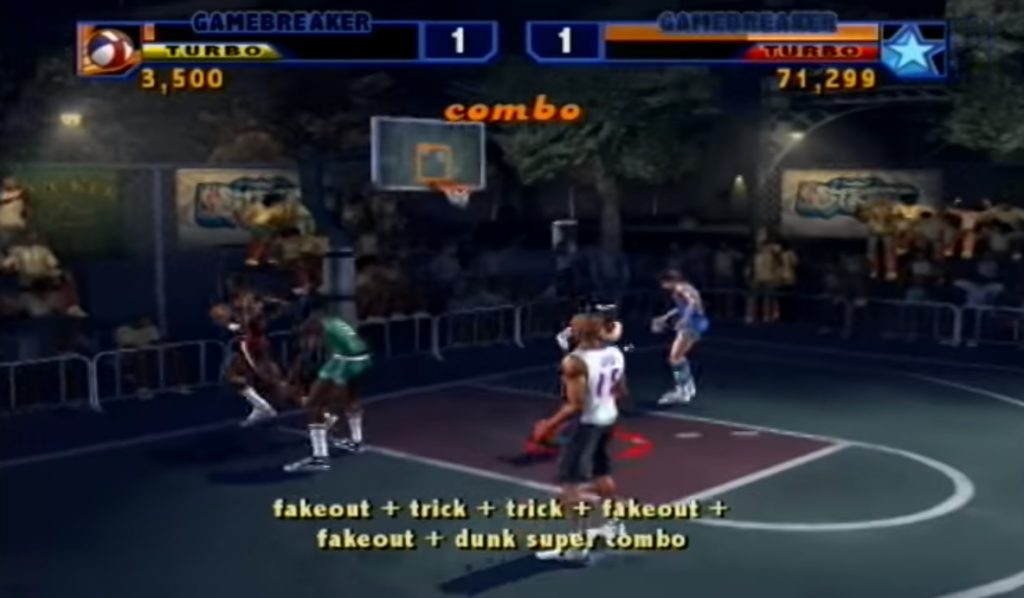 NBA Street: Vol 2 features four game modes. Pick-Up Game (exhibition), Be a Legend (single-player quest), NBA Challenge (defeat the NBA/legend teams), and Street School (training). Players earn reward points after games in all modes, which can be used to purchase rewards such as throwback jerseys, specialty dunks and legends. It’s similar to NBA 2K’s VC system, minus the uneasy feeling VC gives you on the inside.

Be a Legend is the “main” gameplay mode of Street 2, and it’s their version of an RPG-style career mode. Players create a baller and round up a team of fictional local ballers to travel the United States, playing games and tournaments against various street legends and auto-generated randoms. As a player’s reputation increases, more options for competition are unlocked. Players can also unlock streetball legends, courts, jerseys and trick moves.

Perhaps the coolest part of the career mode, or at least the thing that I thought was coolest when I was 15, is that about 50-60 percent into the career mode players are given a unique nickname based on their stats, attributes and game scores. If you have a knack for comeback wins, you might get the nickname Vengeance. If you love jamming on fools, you might be known as The Superfly. The earned nickname is a small little feature, but it adds a little personal touch to your NBA Street experience. It’s exactly the type of fun and unique little bit of fan service that sets the best older games apart from today’s rushed and often unfinished products.

NBA Street: Vol 2 features rosters from the 2002-03 NBA season. Sadly, that means no LeBron, Wade, Melo or Bosh (I believe only Vince Carter is the only player in Street 2 who is still active today). However, a good amount of legends make the cut, such as Bob Cousy, Elgin Baylor, Connie Hawkins and three different versions of Michael Jordan, including Wizards Jordan — the most evil of all Jordans. 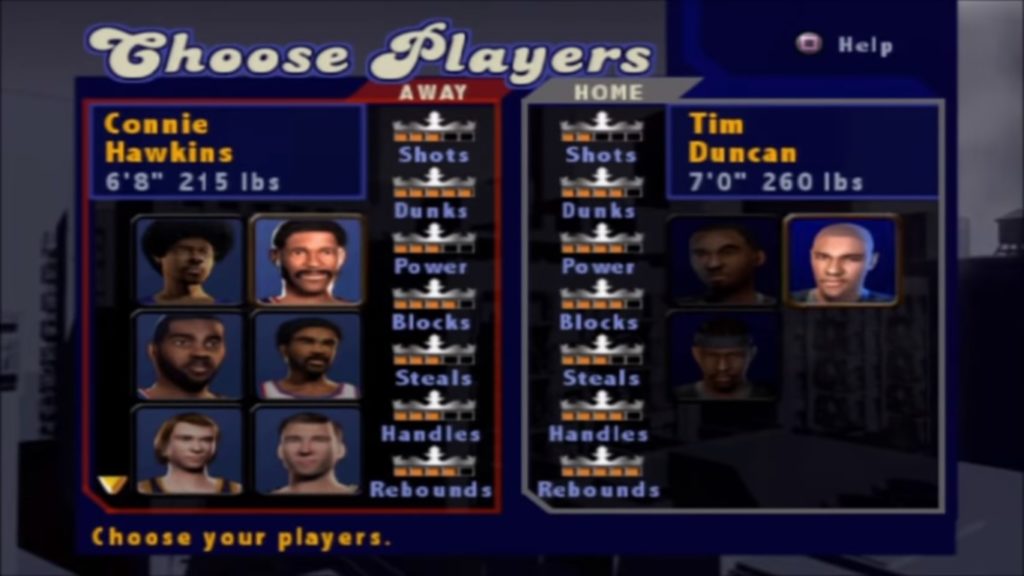 The NBA teams themselves are a fun snapshot of a pre-LeBron world. We have VC yamming on fools in Toronto, the Seattle Supersonics with Vlad Radmanovic, the Kobe-Shaq Lakers, and of course, Yao F’n Ming as a rookie in Houston. There are also a good amount of fictional streetball legends, and these legends come equipped with unique moves and playstyles that can be incorporated into your created baller and used in Be a Legend mode.

It’s hard to talk about the graphics in glowing terms for a sports video game released in 2003, but the visual style of NBA Street 2 is so fun and bombastic that it needs to be noted. The over-the-top graffiti presentation of NBA Street was state of the art at the time. It’s also an art style that was deeply related to the appeal of the game and part of why GQ still wanted to write about the game in 2018.

Having said that, this is still a PlayStation 2 game. Players can be quite blocky looking, so playing it in pseudo-HD at least helps to take some of the age off the game if you go back to it. 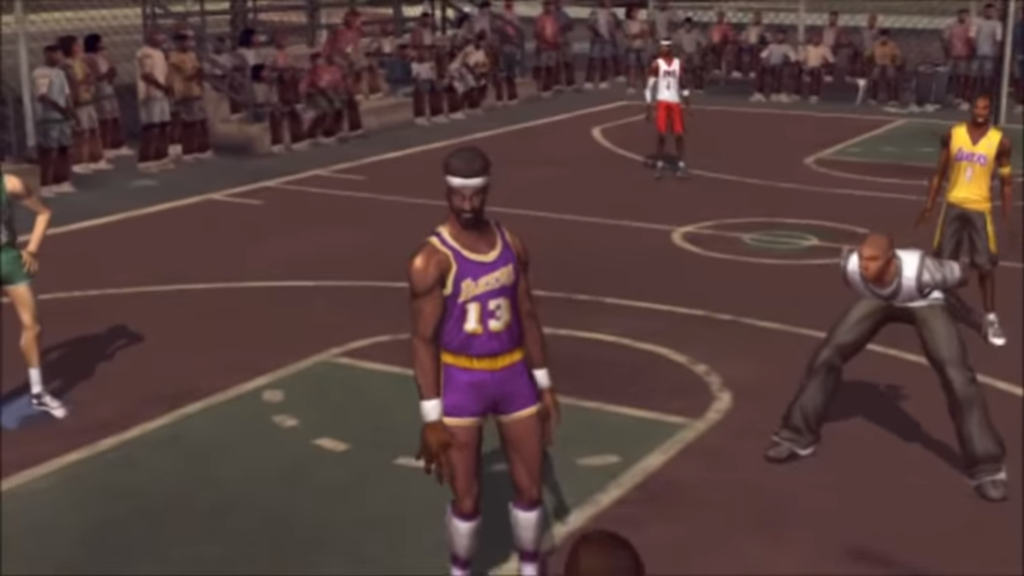 A huge part of the charm of Street 2 is its sound. There are only 10 different licensed tracks, but they all fit so well with the vibe and flow of the game that you don’t really get sick of them. Artists featured in the game include Nelly, Nate Dogg, Redman, Talib Kweli, and of course the all-time greatest intro song in sports gaming history, The Reminisce Over You by Pete Rock & CL Smooth.

The in-game announcing was also revolutionary at the time. Deciding to forego a traditional play by play, Street 2 features real-life streetball emcee Bobbito Garcia aka DJ Cucumber Slice. Garcia calls out various taunts, insults or celebratory inanities as the game unfolds. Garcia famously recorded over 40 hours of monologue (you can’t exactly call it dialogue), and that effort shines through to this day. This was a huge upgrade over NBA Street 1‘s commentary, which could generously be described as grating.

Tough call here, as I think I like pretty much everything about this game. So maybe the dislike is that they haven’t officially remade this game in HD? They haven’t made a basketball game this good since? Those are my only two complaints. If you can mentally clear the hurdle of the blocky ’03-era PS2 polygon men, you will probably enjoy this game. In short, try to play it in HD somehow.

What struck me the most in revisiting Street 2 is the influence it clearly had on the 2K series. In many ways, NBA Street Vol 2‘s Be a Legend mode is a superior version of NBA 2K’s MyCareer. The reward points/development points system is certainly more rewarding to navigate through than the VC system. I honestly might not be able to go back to 2K20 after this. Street 2 is just more fun.

NBA Street Vol. 2 is as good as it was on the day it dropped. It’s a fun, deep and rewarding gaming experience that can be enjoyed by beginners and veterans alike. If you love basketball and you’ve never played Street 2, go play it now. Stop reading this, quit your job, divorce your family and go. Find it online. A new family, I mean.

If you haven’t played Street 2 in a while, I personally promise you that it’s worth revisiting. The original NBA Street doesn’t hold up as well. NBA Street 3 began to deviate from the charm and the aesthetics that made Street 2 so special. There wasn’t a basketball game like this before it, there hasn’t been one since, and there may never be one again. NBA Street 2 is a masterpiece, and a must-own for any sports game collector or true fan of basketball.

Fishing: Barents Sea Review - The Sim of All Fishing Sims
Upgrading NFL 2K5's Rosters is Easy and Rewarding Even If You're Not Tech Savvy