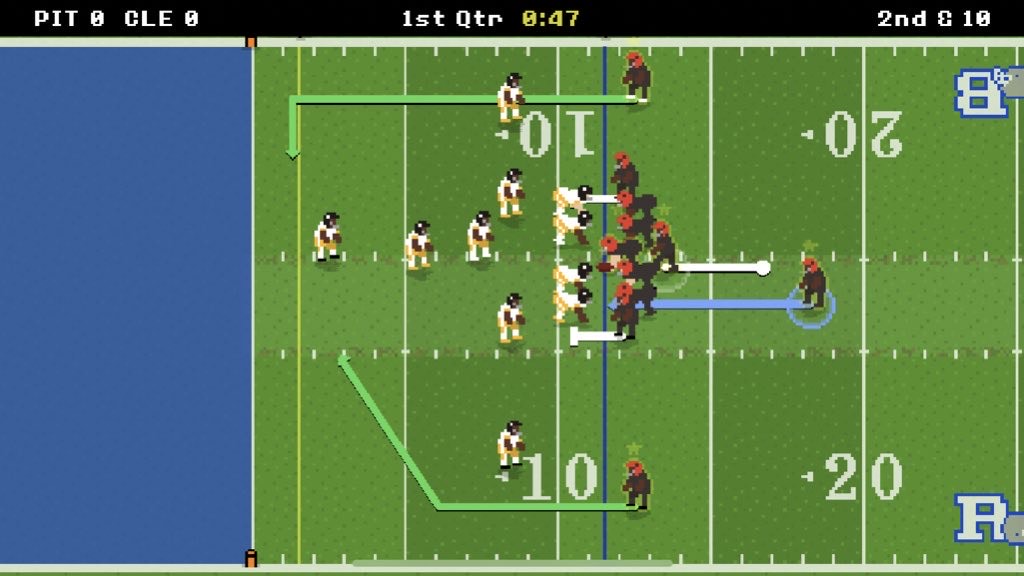 Since I first found out about Retro Bowl, I’ve been anxiously awaiting the opportunity to play it. I was a big fan of New Star Soccer, which helped me get through my years of culinary school. So, when I found out the studio would be releasing a football game, my interest was immediately piqued. I also knew I had to do the Retro Bowl review.

I’ve played a lot of football games over the last 12 months. From text-based simulations like Draft Day: Pro Football 2020, to lesser-known commodities like Doug Flutie’s Maximum Football and Axis Football 2019. Oh, and I’ve also played this little indie game called Madden NFL 20. I’ve played just about every football game that has hit the market over the last 365 days, and Retro Bowl is the best of the bunch.

If you’re reading this, there’s a very good chance you played Tecmo Super Bowl at some point in your life. So, the first thing I appreciated when diving into Retro Bowl were the old-school graphics. These graphics are created by those at Pixel NFL and are unique to the game.

Some players may have similar likenesses or names to those in the NFL, but they are completely fictional and exclusive to the game. Everything from the menus and players to the field stands out in all of its 16-bit glory. Perhaps the nostalgia of the graphics helps mask some of the game’s imperfections. But to me, Retro Bowl wouldn’t be the same game if it were lacking retro graphics.

“Less is more” is certainly a motto that applies to Retro Bowl. It’s a game that is simple yet refined. The game starts with you naming your coach and selecting your favorite team. However, you must know beforehand that choosing your favorite team does not mean you will begin with them. I’ve yet to take over the Miami Dolphins (my favorite team), and I’m in year four of my franchise. So, if you must start your franchise with your favorite football team, you must choose another “favorite” and continue to restart until you land on your magical side. It is my understanding that after you win a Super Bowl or playoff game, you will then have the opportunity to pick another franchise to control.

Beyond that caveat, each team has 10 players, and the salary cap increases as the years progress. There is a free agency period and a draft, which consists of three rounds. Teams will offer you trades, and you can put players on the block as well. Building a team with the salary cap can be challenging, but that’s part of the lore behind New Star Games’ latest title.

Players have “morale” as do the fans, which is very similar to New Star Soccer for those of you who have played. After each game, you will have the opportunity to make critical decisions that will impact a player’s morale. For example, praise the player or the coach? By doing one, you gain experience for your coach and his confidence will go up. Choose the player, and the opposite occurs. There are times when the media may want to meet with you, as well as the owner. Choose the media, and your fan rating will increase. Choose the owner, and you will earn coins that you can use to upgrade coaches, players and the facilities.

As for the gameplay, you only have to worry about controlling the offense, which believe it or not, is excellent. Sure, you’d probably like to have a bit more control on defense when a team is driving late in a critical game with playoff implications, but that’s okay. When you’re on defense, the game will simulate each play and update you with the latest happenings. Once you have the ball on offense, this is where the game truly shines.

On offense, you don’t need to worry about run or pass because you can choose pre-snap before every play. The game decides which routes the WRs are going to run and that changes from play to play. Before the ball is snapped, you will have the opportunity to click on the running back to turn the play into a run.

Alternatively, dropping back with the quarterback, which is triggered by dragging your finger backward from the QB, will result in a pass play. On pass plays, an arc will appear, which you can adjust by sliding your finger accordingly. Pull back further for deep passes, and let off a bit on underneath crossers. It doesn’t take much time to perfect this, and when you do the game becomes second nature.

While you’re the ball carrier, there is no juking or spin moves to help you elude oncoming defenders. You can slide your finger up and down the screen to try and avoid getting tackled, but being taken to the ground is inevitable. Ball carriers will stiff-arm defenders based on their strength rating and, at times, hurdle over defenders.

As for the game itself, each quarter is two minutes long, but the game progresses quickly, especially on defense. Every season runs a full 17 games, and divisions are accurate to the NFL — same goes for the playoffs. There might not be any NFL licenses or official team names, but make no mistake about it, this is an NFL game.

I already mentioned how nostalgic the graphics can make me feel, and the gameplay is as fun as any football video game I’ve played over the last year. One of the other things Retro Bowl does better than its big brothers is it takes some of the stuff that makes the NFL (or any sport) unique and ties it into the game in a very light manner. For example, you will have decisions to make on players throughout the season when they miss practice, don’t play well, or even have a little run-in with the law.

This isn’t over the top, and it still gives you full control over the decisions that can impact the game in a variety of different manners. Retro Bowl also becomes quite difficult over time. So, for anyone who thinks the game is a bit too easy at first, keep playing through seasons and the challenge will increase.

It is difficult for me to find anything to gripe about with Retro Bowl. After downloading the game, users will have the opportunity to play four games before being prompted to pay $1 for the full version. I’ve had Retro Bowl for a week now and could not be happier with the purchase.

However, like with any video game, the replay value is what ultimately brings consumers back again and again. I’m in my fourth season and have yet to get sick of the simplistic nature of the game. But four or five seasons down the road? It’s hard for me to say I’ll still be as invested by then. But again, for $1 and the amount of time many of us spend on our phones, having a game like Retro Bowl to kill time with is a real treat.

I’m not sure what New Star Games has planned for future updates with Retro Bowl. Maybe they add a “college season” with different teams and a four-game playoff. Or perhaps they keep tweaking the little things and continue to make Retro Bowl the cult classic it’s slowly starting to become. As I said at the beginning of this review, I’ve played many football games over the last 365 days. Heck, I’ve played a ton of football video games throughout my lifetime. With that being said, very few games have left a lasting impression like Retro Bowl.

I believe this game belongs on the Mount Rushmore of football video games.