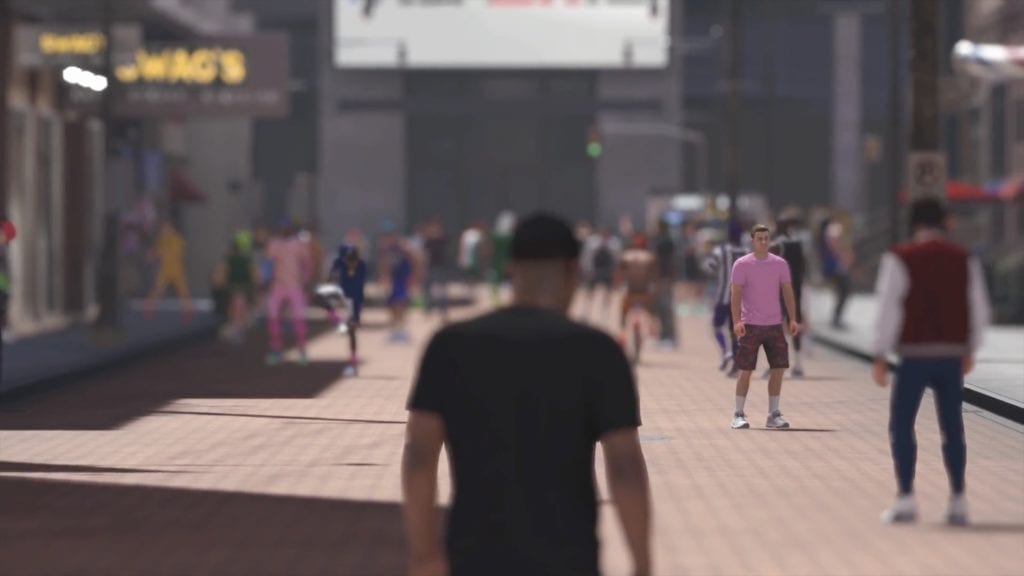 Yesterday we got our first glance at 2K Sports’ master plan with NBA 2K18, as they introduced us to The Neighborhood. In what is basically an attempt to combine all of the elements of MyPlayer into one open-world mode, 2K seems to have really tried something ambitious here. Despite the ambition, it seems the community reaction was one of excitement and worry that virtual currency is going to be a forced buy this season.

But don’t take this introduction writer’s word for it, let’s see what OS Staffers have to say about The Neighborhood in NBA 2K18. At first glance, The Neighborhood concept is really cool. MyCareer has felt fairly closed off in past years. The openness this year should feel refreshing. The details were scarce, but I suspect you’ll work your way up from pick-up games in your neighborhood until you make it to the NBA. By itself, that isn’t all that intriguing. But within the construct of a living, breathing neighborhood, it could become addicting.

2K clearly put a lot of effort into MyCarer this year, which I suspect is likely their most popular and profitable game mode. The key word here is profitable because I can already see and hear the VC coins going cha-ching!

Far be it from me to count someone else’s money. VC works and will continue to work for years to come. But for all the excitement I have for the changes this year, nothing let’s the air out of the balloon like a screenshot that appears to indicate I’ll need to pay VC for a haircut.

That said, I can’t wait to check out the changes for myself. I hope to be pleasantly surprised. On the surface, Run the Neighborhood does seem to be a game changer. Combining MyCareer, MyPark, and Pro-Am in a central city hub sounds pretty awesome. Being able to increase your MyPlayer ratings in the neighborhood adds some layers to The Road to 99 meta that the 2K team is touting, and having a living and breathing world to occupy adds immersion on a level that no sports game has ever had.

Once my initial excitement settled, however, I found myself with numerous questions. Beyond the shops and courts, will the city be populated with players in the street, or will there be NPC’s added as window dressing to a more clever loading screen? How much more of a factor will VC be? Will we need to pay for haircuts and tattoos like we would in a real shop? Is this just a fancy new way to present the same modes we’ve had in 2K for years? Was this something that came at the expense of better servers or fixing legacy issues in online modes? While adding immersion to games is never a bad thing, whether or not that immersion adds anything substantial to the overall experience of NBA 2K18 remains to be seen. Agreed. How much will VC dictate what people can do? How much will alllllll this extra stuff impact an already problematic server situation? And where is Michael B. Jordan? I can’t be the only one still thirsty for a glass of Orange Juice! My fingers are definitely crossed though, because if it all works it could be amazing. After watching the trailer I can say, for the first time, that the hype I usually always try to avoid didn’t happen. Instead I was overcome with a feeling of intrigue, quickly replaced by slight anxiety. Marrying MyCareer, MyPark and Pro-Am together in what appears to be a lively city of interaction is a bold step to take the three game modes and cast them in gold for fans to be attracted to. 2K did a good job of making it look darn good too.

I can say for sure that I love the approach that the team has taken, making everything flow in one seamless mode. Building on the innovations that we’ve been witness to since 2K10 and now culminating into Run the Neighborhood, we’re at a place where sociability teamed with playing and now improving your player in all areas at all times is real. This has been something shouted by the fans for a few years now, having the ability to earn and build at all possible times.

One of the other things that I really took in after watching the trailer and live stream was that there was an underlying emphasis on things not being linear. You can do things when you want, and when you’re ready. While the MyCareer portion itself might still have a straightforward story, not having to run through some of it all at once is refreshing. Knowing I can go hoop with the homies at the Park, go train for a bit, and then go play a few career games is wicked.

As mentioned with some of my colleagues already, and the thing that really brought my anxiety and scary flashbacks like the rebuilding years of my Chicago Bulls a la Eddy Curry and Jamal Crawford days, was what is really looking like a repeated and now heavier reliance on VC. VC has always been needed to buy gear, upgrade badges and improve your player.

This year, however, I feel like unless you have copious amounts on hand (which would mean spending real money to increase your VC bank) success will still be there but your “Road to 99” might be a bit of a struggle or will take you longer. I’m also extremely curious to see how the team has integrated loading into everything.

It’s no secret that loading times and server stability have been a problem for 2K in the past. I hope that despite all the resources used to bring us this hood, there was some work done on servers. That is probably the most pivotal part in having this whole thing really be a success.

All in all, I’m ready to dirty my hands on the Blacktop and I’m looking forward to running the neighborhood.