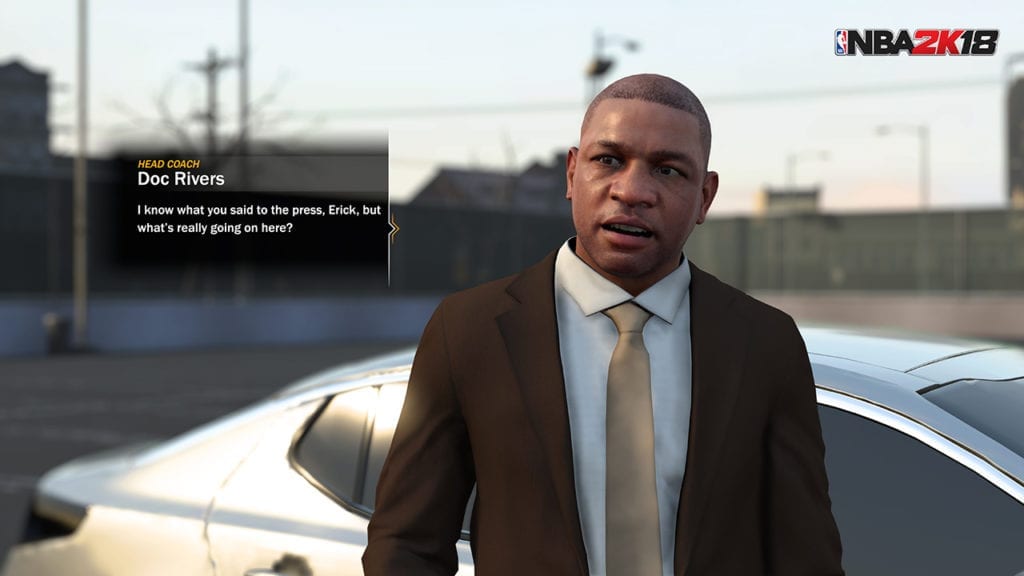 Yesterday, we got a TON of new information on MyGM and MyLEAGUE in NBA 2K18.

Be sure to read yesterday’s info release on the new look MyGM and MyLEAGUE at this link as a primer before reading our reactions!

Ok, now that you are caught up, catch up with us and read our impressions of what’s coming this year to MyGM and MyLEAGUE!

As with anything new in the world of sports video game genre, we have to see how it’s implemented, but color me impressed.

There seem to be many new additions and improvements, and although we have seen nothing in action, the bucket seems full of new things. For me, NBA 2K has grown a little stale over the last few years, but these new additions could really pump some new life into it for me.

I’m especially interested to see how the narrative aspect will work in MyGM. If it’s fully fleshed out, it could be an absolute game changer. They claim that the experience is completely up to the user, and my curiosity lies within that aspect — and how wide of a spectrum the user input will actually affect the outcome(s).

One thing that can’t be denied is the creativity level that 2K puts in the hands of the user, and it sounds like that ability will have a broader and deeper brush, and be more streamlined. If this plays out correctly, it’s just another feather in the cap of the development team.

Ultimately it feels like maybe some of the pressure of having competition again helped push the envelope, and if that’s the case, we obviously all win.

After reading the released information on MyGM/MyLEAGUE, it’s clearly evident that NBA 2K18 is looking to continue the trend of giving us as near to real life of a sim basketball experience as possible; more importantly, the team over at 2K is taking their desire of innovation and melding it with their community to deliver features. A perfect example of this is Erick Boenisch’s mentioning of alternate uniforms for created teams in MyLEAGUE.

Following in line and updating changes mirroring the real NBA, the GM experience this year will be true to form. MyGM’s story narrative is an interesting twist that has been added. My only worry will be that there might be too much of a linear approach based on the choices you can make; I think that in order for this “new” mode to really be a hit, the choices and branches for your choices and interactions will really need to FEEL like it won’t be the same next go round. The additions to MyLEAGUE online and additions to the customization suite are again show us that the 2K dev team isn’t trying to rest on their laurels and get complacent with their product.

“The Analytics Tool that is being given to us gives us the potential to really plot out how we want to build our team from our starters right down to depth and specialty players.”

The biggest piece of news that really sticks with me is the Analytics Tool. When I play GM/MyLeague I really like to get into the nitty gritty and figure out how I can keep my team contending for years to come through not only current or on-the-brink stars, but through youth. The Analytics Tool that is being given to us gives us the potential to really plot out how we want to build our team from our starters right down to depth and specialty players. This is an exciting addition that could really help take the sim experience to the next level, using one of the same types of ways that real NBA teams look at players.

All in all, NBA 2K18‘s in-depth sim modes look to again set the bar and precedent higher for not only the basketball genre, but all sports genres to really take notice of and look to follow for their franchise mode(s). Maybe the revival of the competition has put 2K on a path to be the only basketball game we look towards…for good.

Very impressed, which is to be expected from the team that sets the bar for franchise gaming on console.

The new MyGM looks very cool, and the changes to implement the new CBA and other unique roster situations shows 2K’s commitment to detail when it comes to franchise mode. This is what folks are talking about as one of the arms of immersion — by having such a realistic experience, you’re being put into a very realistic role play. I’d have liked to see more about news and media coverage, which is another huge part of immersion.

I’d have liked to have seen details about a plan to bring more modern gamers into MyLeague. I love the detailed additions, but it might just be a case of more stuff that confuses folks; but as a franchise guy, keep it coming, but with an emphasis on how to bring more folks into the mode that used to rule sports gaming.

The new analytics tool looks great, but I wish we heard more about roster/staff management from the AI, a more fleshed out online franchise mode, and my biggest wish of all: carryover saves.

What did you think of the info releases now that you’ve had some time to digest them?