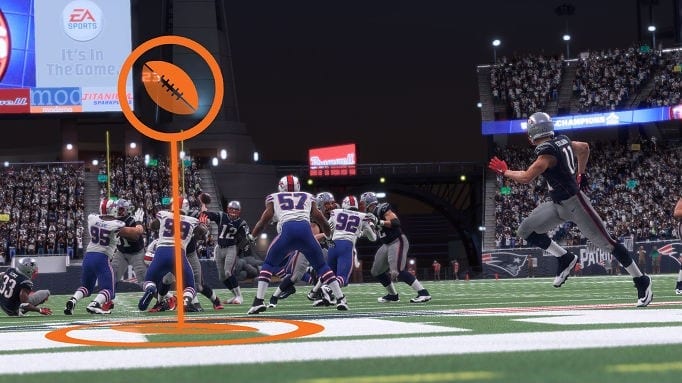 Well, we now know a lot more about where Madden NFL 18 is heading this season thanks to information releases over the weekend, including a new trailer for the game.

To celebrate the occasion, here’s some thoughts from a few of our staff writers on what this year’s game is bringing.

Madden NFL 18. What’s new…whooo weee! Targeted passing looks to be a NICE addition and a good visual to help new and learning players of the game. Even a Madden vet like myself finds it to be a nice addition. The trailer threw me off at first because I thought that the targets were there for the visual fidelity of said trailer. Then we got to see the beauty of this new feature seconds later…it, again, should work nicely. The WR/DB battles, which we learned about earlier, will add the complexity we’ve been looking for on both sides of the ball in the passing game. It looks like players on the offensive side will really have to think twice and be smart when making a pass. It’ll also be a good way to learn how to read the defense and secondary quickly.

Presentation and graphics look very clean. Pregame intros, pyrotechnics, improved stadiums and atmosphere will add to the overall feel when you’re in the game. And the hits. Looks like we’ve got some BIG hits coming.

“It looks like players on the offensive side will really have to think twice and be smart when making a pass.”

Madden NFL 18 is looking like not only another solid entry from the Madden dynasty, but more importantly another step forward in improving the prior year’s product. I feel like it’s always a little hard to tell all that much from a flashy trailer like this as to how the game is actually going to play, but it certainly does its job in getting me excited for the game. In between all of the quick cuts and close-ups, there are at least some glimpses of the new features that will come to define this year’s game.

While it’s nice to get an idea of how target passing is going to work, it still looks foreign enough to me to know that it’s going to take some time to adjust to the innovation and learn if it’s a feature I will want to use regularly. I do wish the trailer did a better job of showing some of the differences between the various play styles but I’m sure we’ll find out more about all of them soon enough.

All in all, I feel like this is the kind of short teaser trailer that probably should have dropped a couple weeks ago to get the hype train rolling but it’s a welcome intro to the new features punctuated by some dynamic shots of the new Frostbite engine in action.

“What exactly did the Frostbite Engine do for the game?”

Ok now that we’ve got those two complaints out of the way (you can skip typing them in the comments) let’s talk about what Madden NFL 18 is bringing to the table this year.

The Target passing feature looks interesting but for sim heads I just don’t know. Honestly its one of those features I just don’t know if its going to please people who want a more sim experience — but it is absolutely going to add to the experience for competitive players. The best players will likely be the best at moving the target around and getting balls into spaces most players wouldn’t dare.

But again, sim players I just don’t see it.

The WR/DB interactions do look better, and my hope is that with them comes more penalties for sim players. I want to see more defensive holding, pass interference, etc. calls. And seeing players jockey for position while the ball is in the air is definitely a treat.

Back to the Frostbite engine, the game has clearly taken a step forward visually — though I’m not sure if it’ll be enough to satisfy some folks’ irrational expectations. Of course the game isn’t going to look dramatically different, FIFA didn’t last year. But it does open up a lot more for the future of the series and the top-end is pretty high.

Overall, solid first info release. There’s lots to chew on. My worry is that EA is trying to do too many things for too many different audiences, and my fear is at the end of the day sim-minded gamers may be the ones that kinda get lost in the shuffle over time. We’ll see.

I agree with Kevin, trailers usually have the opposite affect one me in the sense that quick mashups and cutscenes are good at providing flash but the substance behind them is usually better served by actual gameplay videos. The WR/DB interactions look improved and hopefully it’s more than just cosmetic. As a Skins fan who’s used to seeing at least one illegal contact penalty per game courtesy of Josh Norman I’d hope that the physicality has more to it. Bump and run coverages need to at least try to push receivers off their routes amongst other things. Target passing looks like a good concept but I’ll have to see how it plays out.

The big takeaway for me was at the end with the different play styles. We’ve (the Sim crowd here at OS) have been asking for this for quite some time (in all games to be fair) so seeing how it’s explained over the next few weeks is something that I’m looking forward to. As always, the graphics look sharp and the Madden team seems to understand that an NFL game is an “experience” so all of the pre-game extra curriculars is a welcome addition.