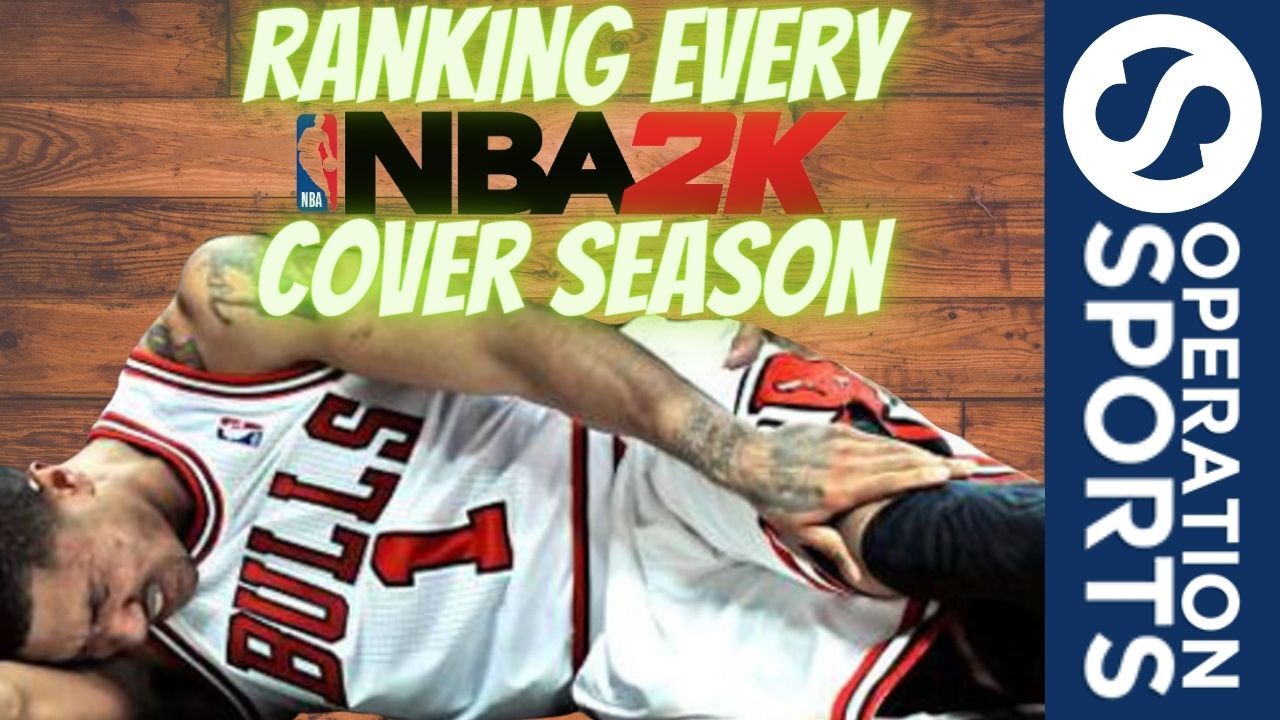 As the dust settles on the 2021 NBA season, and as the city of Milwaukee gets even more drunk than usual, we have officially entered that first big wave of NBA 2K22 info. As soon as the real season ends, 2K season begins. The NBA 2K cover has, in a way, become the most highly sought after cover in sports gaming. Yes, Madden is quote-unquote “more popular” However, the NBA 2K cover doesn’t injure you and end your career. This is what got me thinking about ranking just about every NBA 2K cover athlete there has been through the years.

We’ll get into the finer points of the NBA 2K22 cover in a moment, but let’s shout out the six different cover athletes for NBA 2K22:

Congratulations to all of those players, and to 2K Sports for coming up with a cool art style — beats the pants off of the last seven EA Sports covers.

Now, Madden is known to have a curse, if you will. Certain players who have appeared on the Madden cover have gone on to some rough patches in their careers and lives. This of course begs the question — is every sports game evil? Does the 2K cover carry a curse? Are the 2K cover players generally far better off than their Madden counterparts? And who is the 2K cover MVP?

Well, we wouldn’t be Operation Sports if we didn’t do the odd deep dive. So let’s quickly get into a brief history of the NBA 2K cover and establish how cursed it really is with a quick ranking of (mostly) every cover season in 2K history.

There are 25 different cover seasons on this list — we are skipping any retired legend, and any country-specific cover only for time purposes. Shout out to the one Canadian version of 2K that has DeMar on the cover. We still love you DeMar.

We’re gonna split this up into tiers, starting with numbers 25-19 in a tier I’m calling, The 2K Curse?

NBA 2K13 had three players grace the cover, so we’re not gonna show you that cover quite yet. But if you wanted to make the case that there was a 2K curse, this would be Exhibit A. Sorry to do this one Chicago fans. During game one of the 2011 NBA Playoffs Derrick Rose tore his ACL.

It’s hard to say this is a curse since the injury happened before they put him on the cover. Maybe the plans were already in motion, who knows. All we know is Derrick Rose didn’t play in 2012-13, and thus, that was the worst 2K cover season.

This was Shaq’s second consecutive 2K cover, but this time he missed 35 games with knee surgery, and called Phil Jackson Benedict Arnold before a Christmas game. So yeah things weren’t going so well for the Big Deez. Or maybe they were going great, that’s actually pretty hilarious. The Heat went on a late winning streak to finish 8th in the East and were promptly swept by Chicago.

This was the year where KD had a ton of foot problems, suffering a Jones fracture in his right foot, and missing time all year until officially shutting it down in late-March. He still put down a 25/7/4, but again, this was a little 2K curse-ish.

This was a few years after the “practice” rant that still gets referenced in comedy shows 20 years later. Iverson was suspended by the team, missed some time with injury, and the Sixers missed the playoffs. Iverson will appear on this list again.

Bron is on the cover of the 20th anniversary edition of 2K. This was the first year Bron missed the playoffs since ’05, and broke the streak of eight consecutive finals appearances.

Kyrie’s first season in Boston things were going well until a March knee surgery revealed more damage than was originally hoped. Kyrie ended up missing the rest of a promising regular season for the Boston Celtics.

It’s probably rude to put this here, but I think it was the exact moment Playoff P went from a nickname to a punchline (at least it’s started to come back the other direction again after these playoffs). Indiana finished 42-40, got swept by Cleveland in Round 1, and Paul George moved to Oklahoma City soon thereafter.

Defending champion KG, fresh off of anything being possible. KG only played 57 games. I could have put this in the 2K curse tier, but it’s worth noting that in 2009, Garnett became the youngest player in NBA history to reach 1,000 career games (at 32 years and 165 days). There were a lot of miles on that body in a short span of time. I don’t blame 2K. I blame father time.

Regardless, I’m taking 57 games of this beast mode KG over anybody else on this list so far.

Blake had a slightly down year in 2012-13 compared to his previous year, and his next 4 or 5. Blake was a physical marvel, but defenses were adjusting to his game. His Clippers finished 56-26, and were eliminated by Memphis in Round 1.

Defending champion Big Ben would put up his highest scoring total (a gentleman’s 9.7 points), along with 2.5 blocks, 12 rebounds, and DPOY Hall-of-Fame level defense.

Tough to rank. Shaq wasn’t the same Big Aristotle he was in LA, or even Orlando. But then again, he did instantly change Miami’s team, and they did win the NBA Championship. Shaq is the first man on our list with a ring. And he was a big part of Miami’s success. That’s gotta get him to the top 15 at least.

We could go onto BasketballRef and argue this one until our phones die. What’s important now is that we recognize that Allen Iverson was on the cover of 2K for the first 5 years in a row, and guess what, it was the right decision. Iverson was awesome in all of these years, and you could split this atom any way you would like. There is one particular Iverson cover season that stands out above the rest, and we’ll get into that later.

The Hall Of Fame

We’re going to throw the most recent cover and Dame Dash season in here at #10. If you compare his numbers to AIs, I think Dame’s might be better. We can talk eras and this and that, but Lillard is a worthy NBA 2K cover Hall of Famer, and definitely a future Los Angeles Lakers player — somehow.

Baby bull James Harden, still climbing the mountain with us wondering just how far he could climb. Harden’s Rockets lost to Steph and the Warriors in the first round, but James Harden continued to show us that he was an absolute offensive wizard.

Bron’s final year in Miami, he did rattle off a career high 61 points against the Bobcats, remember them? Bron was a juggernaut, still is a juggernaut, but the Heat would lose to the Spurs in 5 games in the Finals. It hurts him slightly on this list.

A sneaky awesome forgotten year, CP3 led his New Orleans/Oklahoma City Hornets (it was a strange time) to the 2nd seed in the West, one game back of the Los Angeles Lakers. The Hornets would defeat Dallas in round one, but lose to San Antonio Spurs in the second round.

Shout out Milwaukee. This was a huge move by 2k, actually calling out Giannis’ ascent, even going as far to put the word “RISE” on the cover. Giannis won his first MVP in the year he got the 2K cover. Giannis lost to Kawhi Leonard and the eventual NBA Champion Toronto Raptors, a sentence I will literally never, ever tire of saying.

OKC won the West in the regular season and in the playoffs they defeated, stop us if you’ve heard this before, James Harden and the Houston Rockets. But unfortunately KD’s run ended in Round 2 vs the Memphis Grizzlies. Trophies be damned, I’m taking young, 24-year-old Kevin Durant over everybody on this list so far.

I’m not the first person to say this, but Steph Curry broke basketball. He burnt the game to the ground and rebuilt it in his image. His team went 73-9 this year, and he was the main reason.

It’s probably petty to say that because Steph Curry lost in the Finals, and so he has to also lose out on the top spot on this list too. It’s bad enough he lost an NBA Championship and his seat as the greatest player in the most impressive season in sports history. WHEN WILL THE DISGRACES END!?

That’s gonna do it for us today but keep it locked at Operation Sports for the best in-depth coverage in sports gaming. We have numerous awesome, informative articles going up on the website every day and we’re gonna be coming at you more and more on YouTube with reactions, lists, and fun stuff like that.

If you liked me, well my name is Matt Ederer and you can hear more of me over at Sunday Night’s Main Event Radio, Canada’s premier wrestling radio show and network. Check that out if you like the pro wrestling, thank you for listening, thank you for watching, stay safe out there, rest in peace Kobe Bryant.