Sports video games and how they interact with the US and global discourse right now around Black Lives Matter, systemic racism and police brutality are not high on the list of priorities at this exact moment. However, we have seen in the last week how many big corporations and folks who generally would not speak out on such issues are finding their voices right now in an effort to promote change and support allies.

From my perspective, this is a turning point for the discourse in a way that feels very different from the talks that took place around Ferguson, Colin Kaepernick or any number of other moments you want to point to in recent history. The talks are larger in scope, the actions are more pronounced, and the “public relations” and “public approval” aspect of these discussions are now leaning in a direction that differs from the past. And while it shouldn’t matter how popular something like this is in order to create changes, it is still part of how those changes take root in society. If an issue is so polarized that a person or entity can say, “well, clearly this is a split issue so I don’t need to do anything,” then it does generally mean progress will be ignored, slowed or halted.

With that in mind, I was sent an article today from The Faceoff Circle (warning: racist examples are shown here) that details a lot of the racist and generally bigoted team names and player names you run into in the EASHL within NHL 20. To be clear, this is not a new issue in the EA NHL series, or any online sports game for that matter. I have played EASHL for many years, and there is an abundance of terrible stuff you will see if you play often enough. This did get some extra attention with NHL 20 because Thatcher Demko, a goaltender on the Vancouver Canucks, was streaming when he ran into some racist names. The story was then picked up by some Canadian outlets and it led to this response from an EA spokesperson.

“We do not tolerate racist or derogatory language in our games. NHL 20 uses profanity filters that remove inappropriate language. And we also take swift action to remove any derogatory or offensive slang that we find, or is reported. We’re always looking at ways we can improve these filters and our tools, so we can ensure our game is an inclusive place,” the spokesman said via email.

“Unfortunately, there are instances like this where players are able to get around the filters in the game. We immediately investigated this instance when it was reported and we have taken the action to ban the player.”

EA has been vocal this week discussing how they want to improve this environment both within the company and supporting those outside of it:

With that in mind, I’m not specifically writing this to blast EA for allowing racism to be in these games. That being said, being about change means also looking at the content you allow to make it into your games. As of now, the report features and profanity filters in EA NHL are not good enough. On top of that, as is pointed out by Jeff Veillette in the The Faceoff Circle article I previously mentioned, there is not much of a moderation team in place to deal with these reports. In other words, the “swift action” to remove racism from these games is generally not very swift at all right now — at least from my perspective.

Warning: racist example of what I’m talking about below. 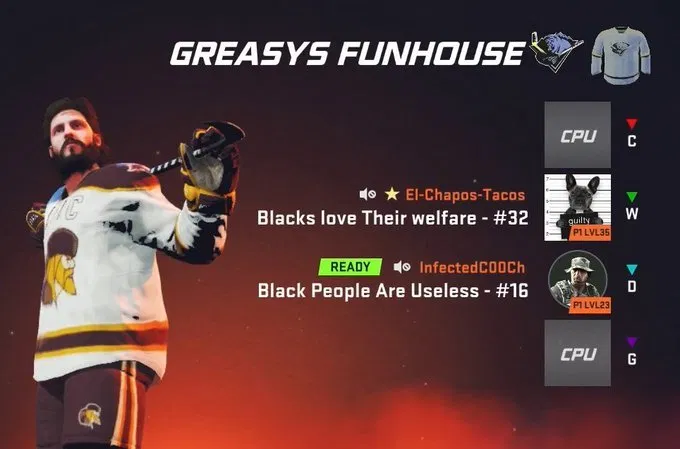 This goes beyond EA NHL as well. There are various racially charged names, logos and teams I’ll run into within MLB The Show and its Diamond Dynasty mode. The same is true for community content in NBA 2K, and just about any other sports game with community creations in it. Created content within these games has been incredible in terms of what it does for custom rosters, sliders and artwork, but it also means these games are open to the same sort of ugliness that can tarnish them and make communities feel less accepted welcomed.

The moderation tools in some sports games are better than others, but the point is it never really feels like anything changes, and I do think part of that has to do with the feedback systems in place. You never know if a report you made led to a change. It also goes beyond the games themselves to Sony, Microsoft and Nintendo. If we never know if the reports we send are being dealt with one way or another, then what’s the incentive to continue to report them and how do we know we’re not just screaming into the void?

Games are global, and so you have communities who are not in the same place as the US in terms of where they are right now in these discussions. There are various other variables and factors that make it somewhat hard to pinpoint the best course of action, but the point with games is about safety and acceptance. If you’re a person of a particular race, gender or sexuality and see bigoted elements directed at you, why would you want to play that game again? Simply saying “ignore it” is not a good enough answer.

I don’t think anyone expects racism or hate to vanish if moderation and reporting systems improve in sports games, but that doesn’t mean you don’t try. For example, Infinity Ward is going to try and up their moderation moving forward.

Does this mean there will be people who react and try to DDoS servers or figure out new ways through filters “for the lolz” and to show how edgy they are? Sure, but that comes with the territory with games and, again, it doesn’t mean you don’t try. Video games have a beautiful way of bringing people together, but Gamergate and the like also show how often video games can come up short in this space. Video games and entertainment as a whole are just one space where we all have to do better and be better.

I do think EA, 2K — and by extension Sony, Microsoft and Nintendo — and other sports game developers and companies will try to improve from here, but I do think it starts first and foremost with moderation. Being responsible for content that makes it into the games they create is the first step in improving the environment we all choose to spend time with during our daily lives.