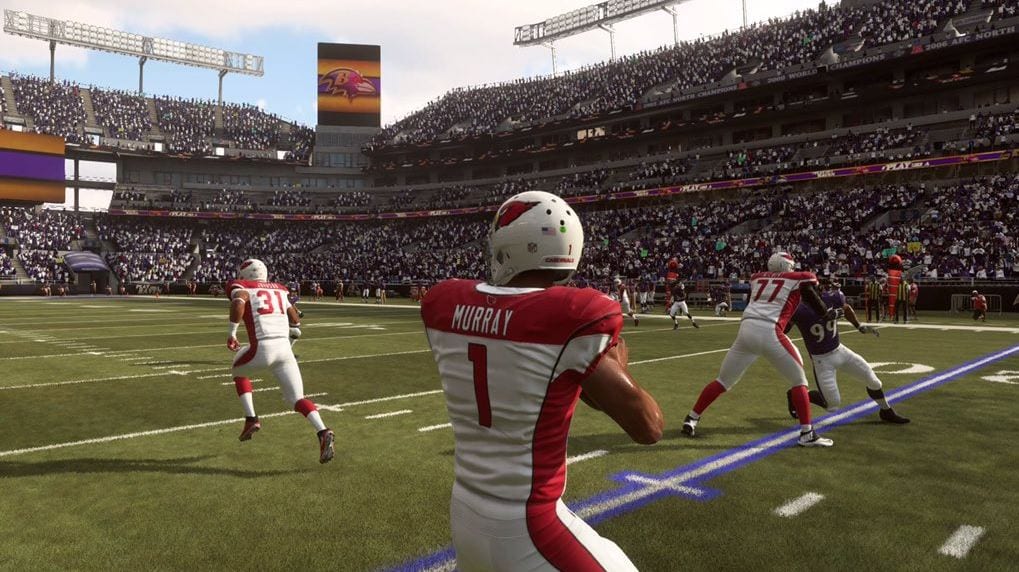 Each and every year, fans of EA’s Madden NFL franchise anxiously await as details for the next installment are revealed. And although fans can’t wait to hear about the latest gameplay improvements and upgrades to franchise mode, one thing that remains “a tale as old as time” is the impending rookie class.

Here is a look at some of the top rookies in Madden NFL 20.

The explosive wide receiver nicknamed “Hollywood” was selected with the twenty-second pick in the 2019 draft. And for a team desperate for anything resembling a wide receiver, Brown might be as dynamic as they come. Experts believe the easy pro comparison is Tyreek Hill. Those are big shoes to fill, but for a player with similar size and speed, Brown could probably do some real damage in an offense piloted by Lamar Jackson.

Once “The Black Hole” found out Marshawn Lynch was retiring, it was clear Oakland was in dire need of a game-changing running back. And with three first-round draft picks, the decision could not have been easier. In this year’s game, Jacobs will make an immediate impact in the running game. He will also be a capable threat out of the backfield as a pass catcher. Jon Gruden is going to do a lot of big things with Jacobs, and you should be able to as well in Madden 2020.

Kyler Murray may have been the first-overall pick, but the consensus top talent was always Ohio State’s Nick Bosa. And for a team that struggled greatly to get pressure on the quarterback, Bosa will quickly become one of the league’s top pass rushers. Anyone that has watched his brother play, knows the type of elite talent he can be. Warning: If you’re playing the 49ers in Madden 20, keep your eyes on Mr. Bosa.

No matter how you view Colt McCoy, Alex Smith and Case Keenum, Washington desperately needed a franchise quarterback if they plan to be relevant in the NFC East at some point. So when Haskins fell to 15, Washington saw an opportunity to upgrade the position with the Big Ten’s single-season touchdown leader. His precision as a passer should translate to the virtual gridiron as well, so Washington got themselves a franchise quarterback, and Madden players get an accurate quarterback who can make all the throws. A win-win situation.

Bill Belichick doesn’t invest in first-round wide receivers — like ever. He’s never done it. So if the greatest NFL coach of all-time sees him to be the anomaly, we should all be scared. Harry checked all the boxes at the NFL Combine and looked the part of a top receiver in this class. With Rob Gronkowski gone, it will be interesting to see how the offensive mentality shifts in New England.  Nonetheless, Tom Brady now has an elite playmaker, and this tandem is sure to be a favorite this go around.

Tarik Cohen is a heck of a running back, but he doesn’t fit the mold of the traditional three-down back found in today’s NFL. This is probably why Chicago felt the need to draft a running back. And, obviously, offensive guru Matt Nagy would select one of the draft’s most explosive every-down running backs with the tenth pick in the third round. Montgomery is powerful and quick, and he very well could be one of the top rookies in 2019, which should translate to a valuable card in Madden Ultimate Team.

LSU’s Devin White was the consensus top linebacker in this year’s class. He is a versatile linebacker who can do whatever is asked of him. White can play the run better than anyone in this class, and then drop back and move fluidly in pass coverage. This is why he was drafted as one of the top-five players in this year’s class. If you play defense with the middle linebacker or just want a player who can do everything extremely well, White is that player for you. His instincts will make him one of the top-five linebackers in football sooner than later.

Tight ends are slowly becoming a top priority in the NFL and Madden isn’t any different. To have success on Sundays or against your best friends after school, you’re probably going to want a dominant target at the position. Enter T.J Hockenson. He is a player who looks like he was created in a lab and has been drafted to become Matt Patricia’s Rob Gronkowski. Hockenson is going to be a fan favorite in Madden 2020 and should be easy money when inside the red zone.

If any team in the NFL would invest a top three draft pick on a defensive lineman, it would be the New York Jets. But unlike those who have come before, this one might be one of those truly special talents. Williams can disengage from an offensive lineman with relative ease, and should be just as dominant at the next level. New York has done some very good things this offseason,  capping it off with one of the two best players in this year’s draft. Good luck running against this front seven in this year’s installment.

Everyone with social media or a television saw that picture of D.K Metcalf where he truly looked like something out of the recent Avengers movie. Nevertheless, his ability to stretch the field with his 4.33 speed and high point the football with 6-foot-3 228-pound frame should make him nearly unstoppable. Russell Wilson found himself the perfect receiver to fill the void left behind by Doug Baldwin. Metcalf will be pure cheese in Madden, and for some that’s a very, very good thing.

Which rookies are you most excited to use in Madden 20?

Face of the Franchise: QB1 Could Change the Future of Madden (Analysis)
5 Things Madden NFL 20 Franchise Mode Needs to Have (Forbes)