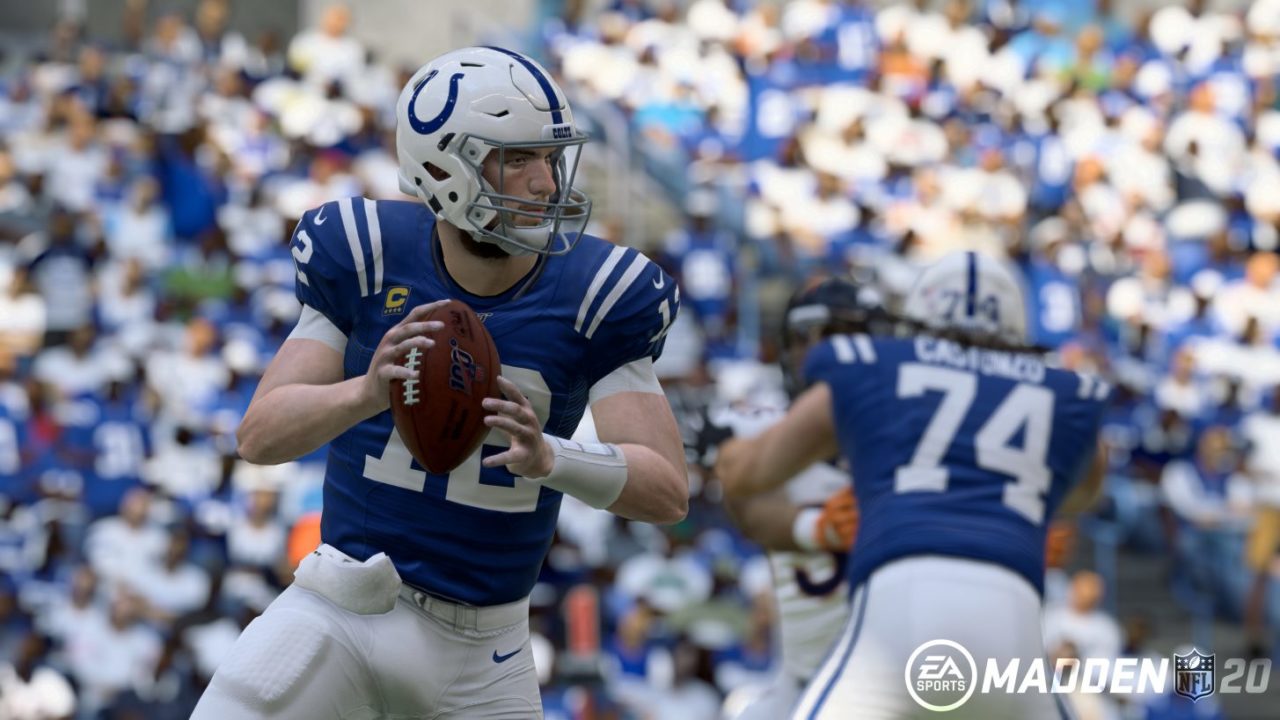 The opening of the NFL season is approaching fast. For Madden 20 players, many have likely already started their franchise and are on a quest for Super Bowl glory. NFL rosters are filled with a variety of positions and skill levels. But every team in the NFL has positions that can be improved. Sometimes you need a defensive end or defensive tackle who has the speed to the outside or strength up the middle. If you are the GM of your team, you can look to find options to make your roster better. Sometimes it is purely situational. Whether it is the need to pick up a player for short screen passes or be able to find a replacement for the defender who was just injured the week before. The ability to build depth at specific positions to take advantage of formations and find weaknesses in the opponent is a great skill. Depending on the position you are looking to refine, some available free agents are better than others.

In no specific order, here are my picks for the top available free agents to add to your Madden NFL 20 roster.

Garcon may be past his prime, and his speed rating is below many of the number one and two wide receivers on NFL rosters, but you can take advantage of Garcon in other areas. Garcon has above average catch rating (90), followed by decent ratings in short and mid-route running. Due to these, I envision Garcon adding value as a number four or five wide receiver. Specifically, placing him as the slot receiver and running plays targeted to him that are good for seven to 10 yards. The inside drags and quick hooks in possession situations are beneficial areas to place Garcon against linebacker matchups. Positioning him as the number four or five receiver and putting him in pick-play situations are great because you can rely on his catch rating to get the ball in the end zone. 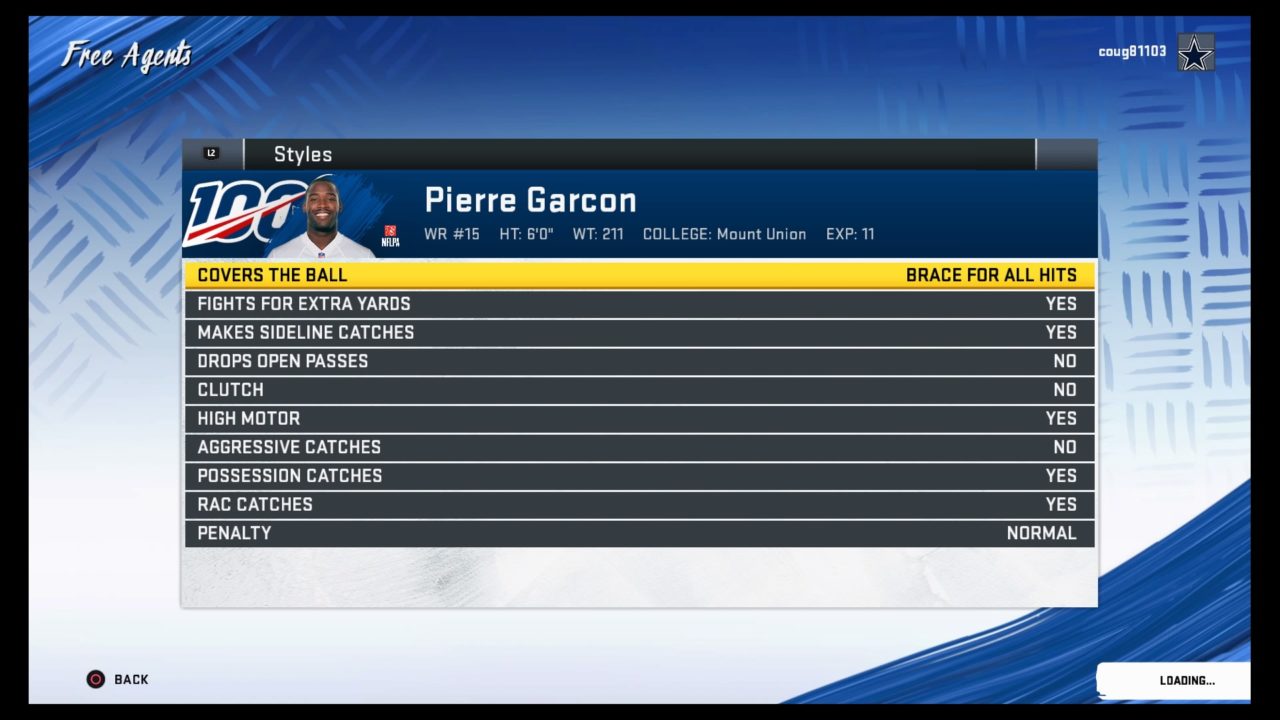 Tight ends in the NFL can be hard to come by. Depending on the type of formations you like to run out of, you may or may not need an additional tight end. If you typically spread the field and run out four and five wide receivers, then you may want to pass on Jenkins and keep your cap money. If you’re primarily a running offense that utilizes heavy or one-back formations like ace and wing, then you may find more value in Jenkins than you think. Jenkins is more of a run blocker than a receiving tight end. He has a run block rating of 75 and is near average in pass blocking. He can provide decent run support when overloading one side of the field versus a basic one-on-one matchup.

Osweiler at this point has enough solid ratings to be a good option as a backup quarterback. He has a speed rating of 75 that gives him some average mobility in the pocket. In terms of Osweiler being able to throw the ball, his passing ratings are above average. His throw power is 90 and he wraps up the rest of his passing attributes in the high 70s. This is sufficient enough for him to make his way through games and give the team a chance to win. The Colts are an option to add depth to the quarterback position after recent events. 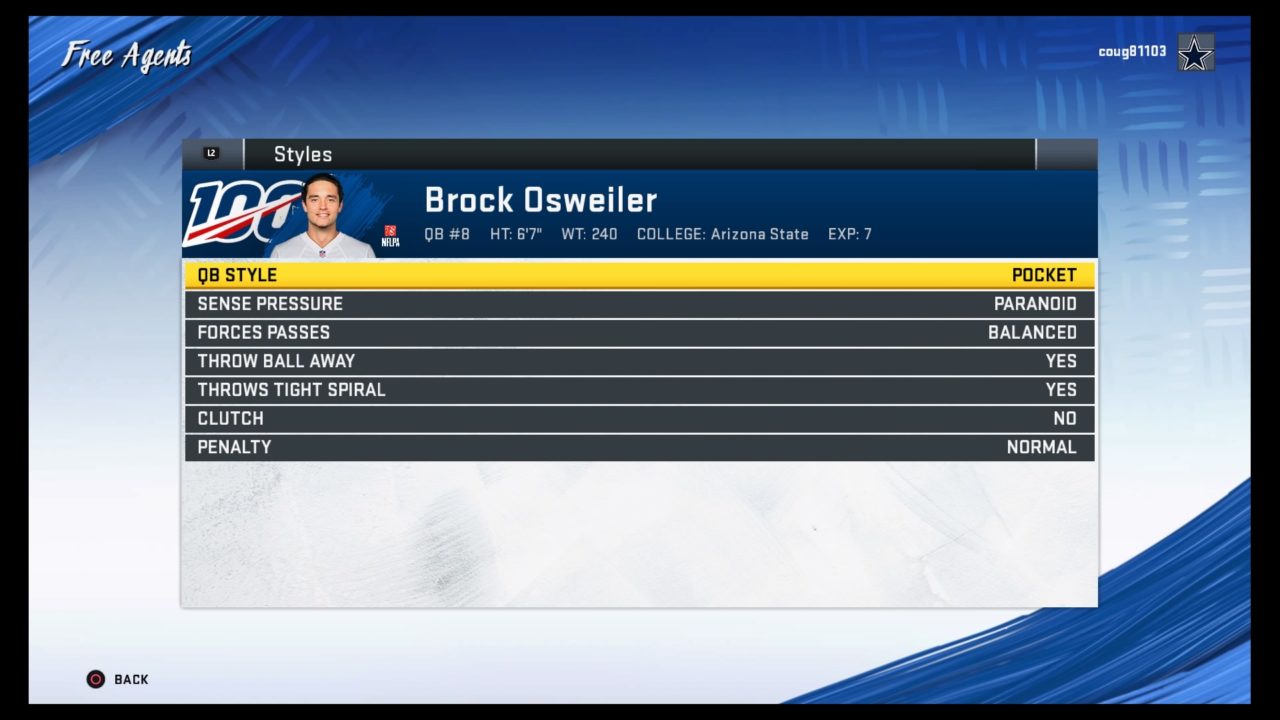 Blount can be a beast if he is used correctly. Considering he is not the fastest guy nor the quickest off the ball, Blount will not be able to beat defenses with acceleration on the toss play or sweep. However, he is valuable in plays up the middle as, for example, his strength rating is an 86. You can use this one attribute to your advantage. Secondly, he has average speed and a solid break tackle rating. If you’re able to get him to a hole, then you can maybe squeeze out more yards than expected. Running trap plays with a pulling guard or straight dive plays are good methods of getting Blount to the line of scrimmage as fast as possible. Count on Blount to be a good option when you need a two-yard gain to save the drive or when you are facing third or fourth down and goal. 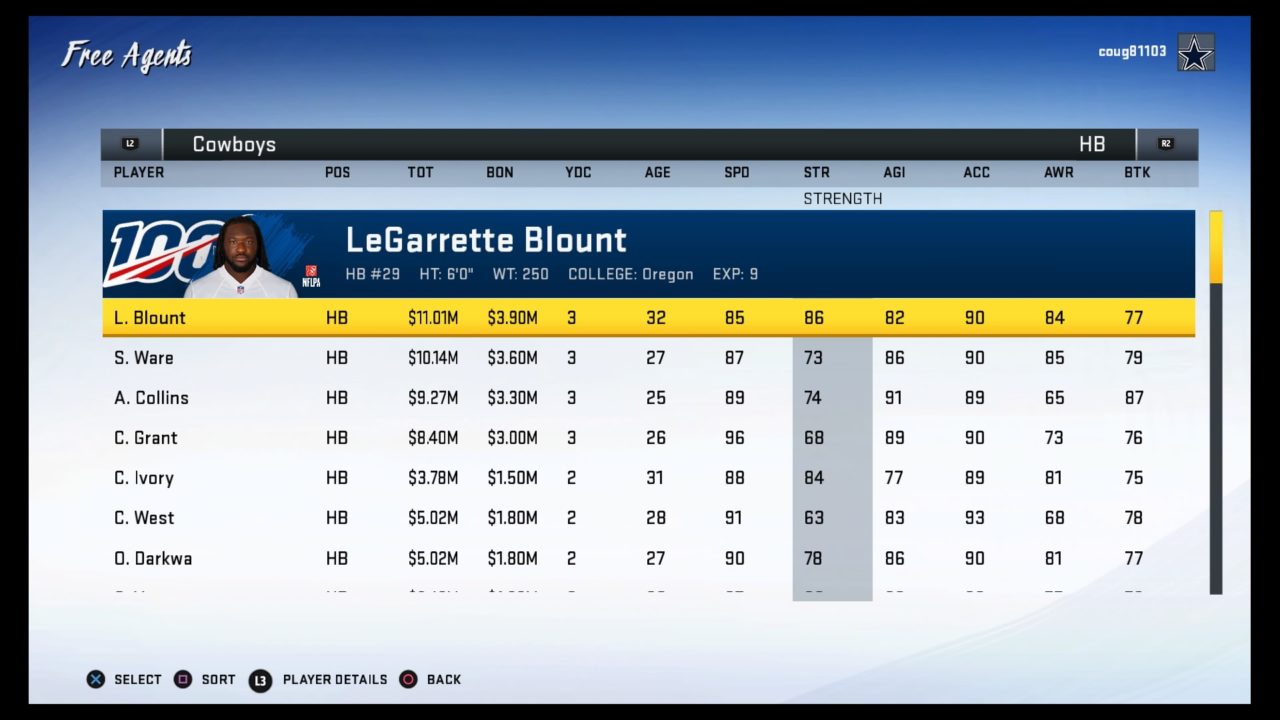 Corey Grant is not a player most people would think to add to the roster. However, the fourth-year player out of Auburn has a speed rating of 96. That means, according to Madden 20 player ratings, there are only four players in the league who are faster than him.  You can utilize Grant in a variety of ways. Think of the quick screen or giving him the ball on the fly sweep. Grant has the speed to hit the edge and break off a long run. If he doesn’t fit in your roster in those spots, you can also make him your kick and punt returner. At that speed, if he can hit the hole then he has the ability to take it to the house, or at very least has the chance to give you solid starting field position. 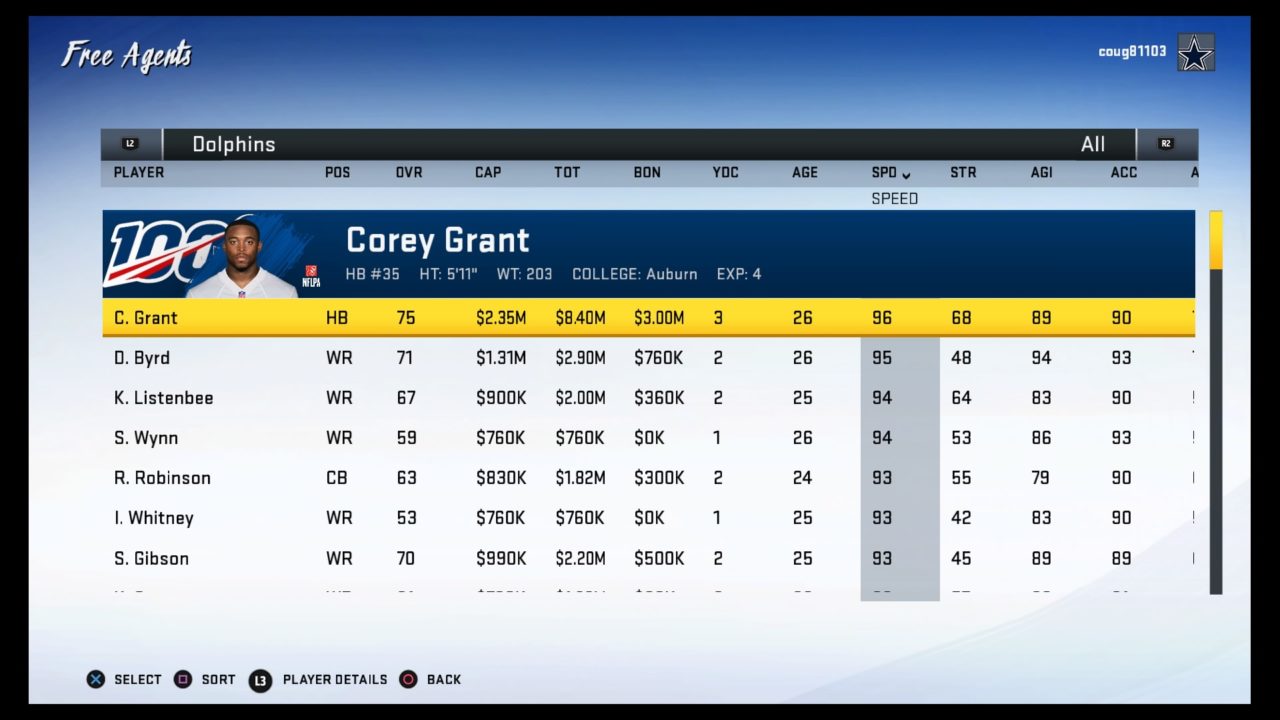 Finding ways free agents can benefit you require you to utilize your GM skills and take a deeper dive into player ratings. Next, you have to see how this player will affect your team financially. Some players who have made a reputation in the league will want to make sure they get their due. Ultimately, free agents don’t have contracts for a reason — whether it is because of age, overall ability or timing. If you can find players who can help your roster but not hurt you on the salary cap, then they have value. They can potentially help you as a kick or punt returner, or someone you put in just for a deep ball to try and make a big play. Finding value and sorting through free agents creates an exciting experience when running a franchise, and these situations help you become the general manager you’ve always dreamed of being.