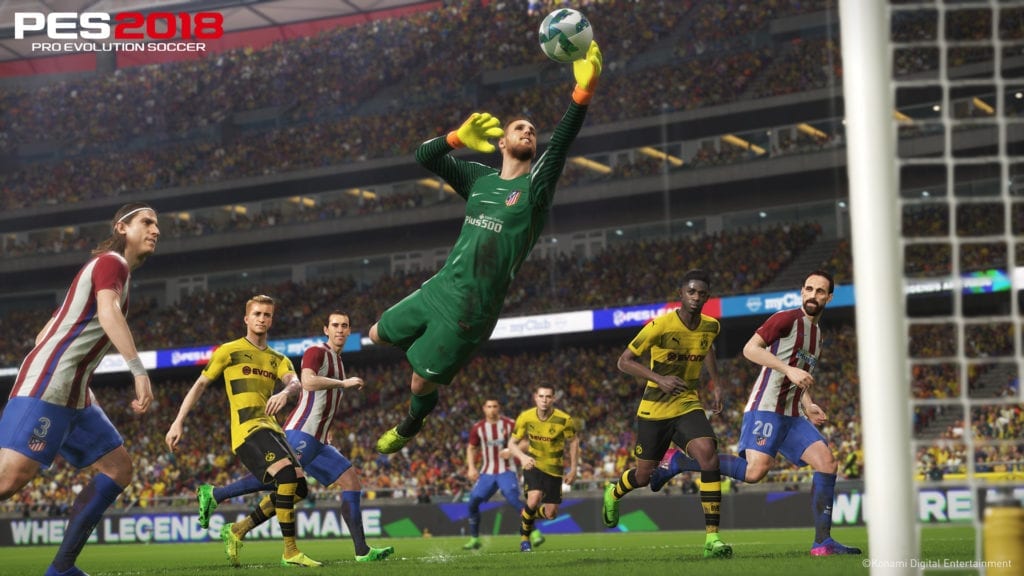 This is the third time getting my hands on PES 2018 with the Online Beta and Demo previously released within the last few months. That’s three different versions for all of us to play and critique as footy games now enter the shuffle in the always crowded fall sports release schedule. With a few days to play and digest the latest version, it’s time to see how the gameplay measures up to previous iterations.

Enhanced Visuals/Player Models – Player models have been reworked with an emphasis put on body types. The difference between an Olivier Giroud and his national teammate Antoine Griezmann is easily recognizable on the pitch and in the pre-match warmups. Also worth a mention is the removal of the blocky shorts that plagued the series for far too long. Overall, the graphics have seen a boost. While it’s still a challenge to step up to the level of a Madden or NBA 2K in terms of graphics (mostly due to the zoomed out camera angle) the player faces and crowd visuals are better than they’ve ever been before.

Player Variety – For the most part, a lot of players from top clubs feel similar in control because they’re ratings are so similar. When you venture away from these mega-clubs, the difference between players is like night and day. Some of this may be due to form arrows, but in some recent exhibition Champions League contests the difference in feel between say FC Basel and Manchester United is immediately recognizable.

Animations – The animations in the full release are even better than the beta and demo. Sure, the occasional clipping occurs and true foot planting is still years away, but the animations that play out in PES 2018 are contextually correct and visually pleasing. Everything from collisions to keepers have been refined.

Ball Physics – Ball physics were very good last year and they’re generally outstanding in PES 2018. Deflections, spin placed on passes, and the weight of certain pass types all feel and look very realistic. Headers are especially beautiful with varying degrees of spin put on them mirroring Edison Cavani’s header vs Celtic on Champions League Group Matchday 1. All of these enhancements help to create the newfound freedom evident in PES 2018.

Dribbling – From the attacking perspective, the game captures the essence of the 1v1 take on better than the other footy game out. Quick changes of pace, clever flicks of the R-stick, and other feints can send a defense into panic mode. Without having to rely on tricks, you’re now able to get the best out of those dangerous wingers.

Physicality – The physicality went from excellent in the beta to poor in the demo, back to excellent in the final release when playing against another human. Versus the AI, the CPU will often pass before you have a chance to close down or dispossess you with a perfect tackle when on defense. However, against another human it shines. You can hold off players, lean on them, and generally disrupt their actions without over-committing and fouling the opponent.

CPU In-Match Adjustments – This year more than ever the CPU will adjust their tactics, formations and mentality in-match. Down a goal late I’ve seen the CPU sub on attackers and change up their formations to push numbers forward. Additionally if you keep an eye on the Attack/Defense levels, you will see the CPU push their attack levels to red in attack and blue in defense. The big test will come in Master League when the CPU or your team is in an elimination scenario. Lack Of Fouls – Against the AI they are few and far between. A combination of formations that are too open and an overall lack of aggression when it comes to closing down can be partly to blame. At times the computer will allow you turn a defender too easily when the situation could call for a professional foul. In other moments, the CPU lacks the recklessness that often shows itself on the TV when watching a live match. It’s odd, fouls outside of the eighteen were not really a huge issue in PES 2017 but it seems to have regressed with PES 2018. How are we supposed to see the new revamped free-kick system if we don’t actually get fouled?

Absence Of A Midfield – Mentioned briefly above, the midfield battle that used to be a PES staple has disappeared vs the AI. Whether it be the AI passing around yours with first-touch passes that would make Barcelona blush or just simply attacking the vacant space, the midfield is largely a runway with the majority of action happening outside of the box. With a default camera that displays a larger pitch size, the amount of ground to be covered is simply too much for your teammates and the AI to handle. Without resulting to tactic tinkering, I’m often engaged in contests that resemble track meets as opposed to a real footy match.

Passing – Passing on the default Pass Assistance 1 (PA1) is a mixed bag. On one hand it’s far too easy to tiki taka your way down the pitch regardless of the quality of player. On the other hand the game suffers at times from passes going to a player that wasn’t your intended target. Sure the last part can be remedied by manual passing or use of the manual modifier (L2/LT), but much like player switching it feels off. On the higher levels (anything above Professional) passing by the AI is far too accurate. The only real misplaced passes by the AI come via interceptions or passes in the air that don’t find their target. Apart from that everything is near perfect. Passes roll perfectly to feet with the correct amount of weight and placement. Yes, these are professionals we’re talking about, but not even the pros play perfect passes when defenders are leaning on then.

Ball Recognition – It doesn’t happen frequently but when it does it’s usually in moments that you wish it wouldn’t rear its ugly head. Sometimes it’s players who aren’t the closest to a 50/50 ball locking on, other times it’s players with their heads down (or so I like to think) running to a spot ignoring their surroundings.

Space – A lot of what I’ve mentioned in this section blends into another issue. Too much space and a lack of a midfield walk hand-in-hand down the aisle towards a marriage made in arcade heaven. Ultimately, it’s the basic fundamentals of defending that lead to head-scratching moments. Your two center backs will often drop deep, yards behind a striker with their back-to-goal allowing them to collect a pass, turn and descend on your back line. Fullbacks/Wingbacks will bomb up the pitch and leave the wings wide open as your two center backs remain central. Employing a three-man attack (think 4-3-3) will offend see your wide attackers not track back or even attempt to contribute defensively. Sure, Neymar, Hazard, Messi (to an extent) can get away with these luxuries because they contribute towards goals and put butts in seat but your run-of-the-mill English Championship winger better get his “you know what” back and block off those flanks.

Tactics/Advanced Instructions/Etc. – Look, I love that the game gives us the ability to have our players carry out a gameplay of our liking. I just hate the fact that it seems like there are so many variables that they somehow override each other. Attacking/Defensive Instructions, Advanced Instructions, Fluid Formations, and sometimes even Positional Designation (CMF vs AMF vs DMF) can influence how the action plays out. Ideally all of these variables help to create different team play styles, and they do to a certain degree, but it’s the implementation of these that creates some bipolar matches. Throw in player form arrows and what you have is a game that isn’t stuck in two minds, it’s bordering on multiple personality disorder.

Delay After Being Dispossessed – This was one my pet peeves in PES 2016 and it was lessened a little in PES 2017 by more responsive controls and a better collision system, but I was hoping it would be all but removed this year with a reliance on momentum/inertia. Turbo forward (a no-no in PES unless you have space to run onto) and get the ball nicked from you should see a slight delay. At a standstill trying to find an option should result in a much smaller delay.

“Testing Network Environment” – Yes I know it’s a bit of a nitpick, but after nearly every action in the game’s menu you run into the blue spinning ball of death in the bottom left-hand corner followed by this message. How often do you need to check my connection when I’m simply trying to play my second Exhibition Match after applying the Live Update? Furthermore, there’s nothing to do but simply wait. At least give us some tips like they do when you’re waiting for a game to load. FIFA and its mini-games might border on tedious after a while, but at least it’s an option to not sit the controller down and check our smartphones for the one millionth time that day (unless you’re checking OS of course). What’s Yet To Be Determined

Konami, through Twitter, has hinted at a future patch to help remedy some of the issues that have plagued the initial release of PES 2018. Areas of concern such as fouls and player switching should and could be resolved in a gameplay patch in the upcoming months. Other items such as positioning and tactics will require a deeper dive that only a full development cycle can offer. These days gameplay patches/tuners are a common occurrence. NBA Live even patched their demo two or three times leading up to the full release. Konami has been pretty diligent in their post-release support these past few years, but there’s a dilemma brewing between the simulation and arcade crowd. The easy fix would be to go the Madden route and give consumers the option of choosing of how we want to play (or offering sliders), but in a game where we’re shielded from the developers that seems highly unlikely. Until then we’ll have to trust that the team over at Konami has our best interests at heart. It’s easy to see the improvement PES 2018 has made over its predecessor. Overall feel, dribbling and physicality have all been enhanced. Apart from these and a handful of other improvements PES 2018 still suffers from some of the same issues as 2017 and takes a step back when it comes to fouls and CPU predictability. The random moments of brilliance this series was famous for have now become commonplace with inflated scorelines and players of any pedigree able to perform backheels, outside of the boot passes, and other highly skilled efforts usually reserved for the game’s elite. It’s still early enough in the release cycle for Konami to tighten the gameplay, but perhaps this is the direction in which Konami has always intended on given the competition’s firm grip on the footy gaming market.

Start PES 2018 Off In Style With an Option File from PES Universe
PES 2018's Master League: Everything You Need to Know