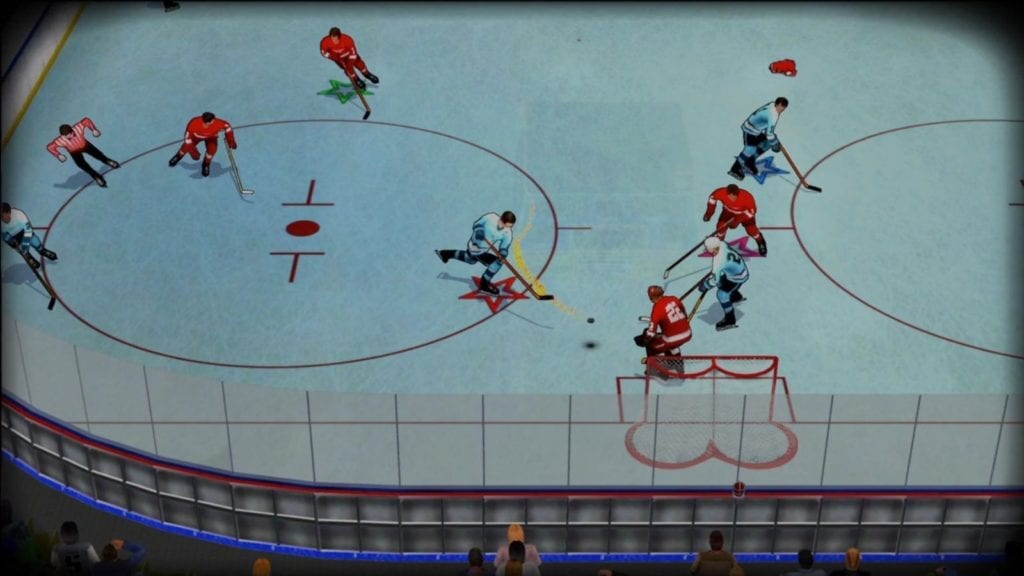 As a fan of old-school hockey games, I was very excited to try V7 Entertainment’s Old Time Hockey. It appeared to be everything I loved about the NHL games of the early ’90s, and I was anxious to see how it compared.

Immediately after installing the game, the first thing that stood out to me was the graphics. V7 Entertainment did a great job making the game feel vintage without being too over the top. Everything from the fictional players and teams to the arenas, it all had a throwback feel to it. The graphics looked like something straight out of a 1970’s comic book. It added a unique feel to the game and enticed me to want to play the game even more.

Old Time Hockey has two game modes: exhibition and story. Exhibition mode is exactly what you’d expect. Users have the option to choose between 10 fictional teams, some examples include: the Portage Lake Widowmakers, Warroad Ice Anglers, Moose Jaw Farmhands, Long Island Rumrunners, among several others. 1-4 players are able to compete head to head in a traditional three-period hockey game, and users can adjust the length of each period ranging from 2, 3 and 5 minutes. Depending on your skill level, difficulty varies from rookie, sophomore and veteran. Icing and offsides may be turned off if that’s something you prefer.

Story mode is a nice escape from the ordinary exhibition mode. Here, players control the Schuylkill Hinto Brews, who are currently ranked last in the BHL (Bush Hockey League). The year is 1975 and the goal is to revitalize their disappointing season. Prior to each game, you will be given objectives to complete. Some objectives include hitting certain players on the ice, getting the opposing goalie pulled, successfully shooting four slap shots, etc. Playing through story mode also unlocks “collectibles” (they appear to be player-specific cards). I’m still uncertain what unlocking each card does, but it’s a nice little extra nonetheless. Although I have yet to complete story mode, the story itself seems to be a fun alternative to what we’ve become accustomed to in sports gaming. In one instance, the Hinto Brews were caught drinking and smoking cigarettes pregame, but that didn’t’ stop the team from playing later that night. I’m excited to see what the rest of this mode entails and whether or not it will hold up a few weeks down the road.

If you are a fan of old-school hockey games, Old Time Hockey will probably hit the spot. The controls are what you’d expect from a hockey game, with different layouts being harder to learn than others. I chose the most basic of the configurations, which paid homage to the old-school games. I selected the two-button layout, and was able to play the game without any issues after two or three games. There is also a “beer mode” for those of you who plan on playing with one hand while drinking a beer in the other. For me, the biggest issue was with the game’s responsiveness. At times I would want to turn into a player or perform a move, and found myself having to hit the button several times before it responded. This seemed to happen more often than I’d like, and just felt as though I was always a half second late. Passing was a bit harder than I expected, and at times, seemed to have a mind of its own. For example, despite intending to pass to a nearby teammate, the puck would sometimes go nowhere near that teammate.

Character movements and animations were what I would expect from an independent game with a small budget, but overall these things were still lacking. Players moved awkwardly and often took poor angles in pursuit. Goalies only seemed to have a handful of animations, which don’t seem to change much as the game progressed. Goalies rarely possessed the puck, and oftentimes just awkwardly pushed the puck into a nearby corner. Defenders appeared useless and very rarely helped stop an opposing player.

As for goal scoring, I did see a nice variety of goals in the several games I played, something I was concerned about prior to purchase. However, similar to NHL games of the past, the easiest way to score seemed to be by crossing in front of the goalie. This was a problem back in my EA NHL days, and something that seemed to happen often in Old Time Hockey. One-timers were non-existent, which was very frustrating for a hockey game.

I did get a great deal of pleasure checking players into the boards, resulting in a comic book style “BOOM” or “BANG” on the screen. Big hits usually resulted in a player being knocked out for several seconds, allowing a slight advantage for the attacking team. For as many big hits as I’d successfully execute, there were a handful of times I’d whiff entirely. If the opposing team was on a “hot streak,” it would be harder to land big checks and players would bounce off one another like ping-pong balls. Big hits would often end in a fight, a key part of Old Time Hockey

Fighting was one of the key elements in hockey games of the early ’90s, and something the developers hyped pre-release. Fighting adds a different dynamic to the game, but got stale quickly. There was very little variance from fight to fight and this often left me wanting more. Damage to a player carried over throughout the game, which was a nice addition. For example, if a player lost a fight earlier in the game and got into another one, his health would already be drained. Lose two or more fights over the course of a game and you risk injury to your player. Throughout my playing time, I witnessed quite a few players leave the game due to injury.

The audio in the game was very lackluster aside from the catchy organ music. I caught myself singing the theme song quite a few times after playing. The commentary was a nice addition, but overall it didn’t quite match the dynamic of the game. Very rarely did the commentator’s monotone voice change with a big play or goal. When a team would score, instead of a standard siren, it sounded more like the end of the period or a shot-clock violation. Some effects, such as the slashing of a stick, sounded like a guy making a “whoosh” noise with his mouth. Overall it wasn’t terrible, but the sound could definitely use some work.

In the end, Old Time Hockey is a fun arcade game that brings back fond childhood memories. The organ music is a nice touch, and with the two-button layout it plays similar to hockey games of the past. However, despite the creative story mode and unique graphics, the timing issues and gameplay quirks make it difficult to get too invested in the game. If you’re a die-hard hockey fan, this game may be worth a purchase. But for a majority of sports gamers, $12 is a bit steep and not worth it for an average hockey rendition. V7 Entertainment has laid the ground work for a solid hockey game, but Old Time Hockey falls short of excellence.