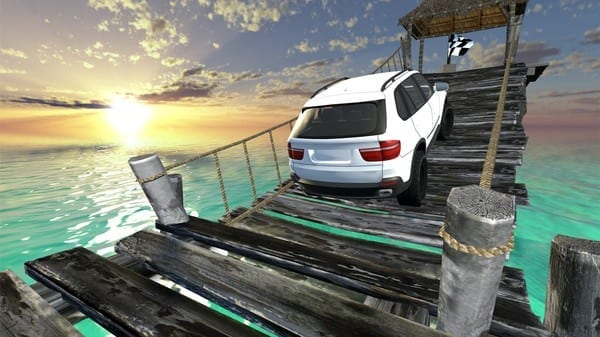 When Trials HD hit last-gen consoles more than seven years ago today, it had a ripple effect on indie sports games everywhere. The wacky physics engine and entertaining failures that resulted from it created a niche genre of video games. Since then, we’ve seen games that emphasize odd physics in order to have a humorous, if a little frustrating, impact.

Off-Road Paradise: Trial 4×4 attempts to capture that same response, but has a hard time doing so. It’s important to note that the game is in Steam’s “Early Access” phase and is an evolving product. Some of the issues that existed a week ago are less of a problem now, so it’s hard to see where the game might be a month from now. Regardless, here are impressions of how the game plays as it currently stands.

Each level hands you a short, bumpy island to transverse. In your 4×4 vehicle (of which there are several to play with) you simply move from point A to point B. Knock over a flag at the end of the island, and you move on to the next level.

It’s worth mentioning that each level is also accompanied with a “Totem” you can collect. Each Totem sends you out of your way to collect it, all of which have varying levels of difficulty. These Totems are your fastest route to unlocking new vehicles, so they’re worth the time if that piques your interest.

Unfortunately, the additional vehicles hardly feel any different. Even some of the later unlocks feel virtually indistinguishable from “Mountantious,” the vehicle you begin with. There simply isn’t enough incentive to go out of your way for the Totems unless the added difficulty is something you’re looking for.

The physics engine itself doesn’t provide the kind of wacky moments that make the Trials series so much fun, nor does to really aspire to have any kind of realistic balance. Most of time it just winds up being frustrating, especially when you clip into the side of a rock or bridge and your entire vehicle stops functioning. There are also precious few obstacles to overcome, especially in the earlier levels. You’ll spend most of your time trying to predict the shifts in rock and how that will affect your drive.

The game runs smoothly enough and has fantastic lighting. You’re set in the middle of a scenic ocean, filled with fish and birds flying about. If it weren’t for inordinate amounts of clipping, Off-Road Paradise: Trial 4×4 would be one of the best looking indie titles of the year.

There’s also a destruction engine that feels entirely superficial. Sometimes you’ll be crossing a bridge and a wheel will fall off, or you’ll make a soft landing on a new set of rocks and your bumper will fly into the ocean. It looks funky, especially because the rest of the game has such a down-to-earth feel to it. During these times, it feels like the game can’t quite decide what it wants to be.

The game also owns a relaxing, acoustic score. At its best, Off-Road Paradise: Trial 4×4 actually has the potential to be a relaxing off-road experience. It’s just that odd juxtaposition of relaxing atmosphere and frustrating gameplay.

It’s also worth noting that, before a recent update, the game was nearly unplayable without a VR headset due to awful camera angles. Thankfully, this is all but fixed as of December 16. The new camera angles have less violent switching (though, they’ll still occasionally result in a vehicle driving off the side of a cliff) and allow you to station the point of view directly behind your vehicle — an angle that helps show off the game’s best visual qualities.

The game is currently extremely light on available game modes, but most of that is due to it being in Early Access. As of right now, it has a single-player mode that throws a couple of dozen levels at you and is adding more regularly. There’s also a local multiplayer mode that can be quite fun. The only downside is you’ll likely have one player on a keyboard and mouse, where the controls are extremely clunky. The local multiplayer levels are the same ones that you’ll find in single player.

Most exciting is some of the additions Ivanovich Games, the developer of Off-Road Paradise: Trial 4×4, has planned. As of right now, a level editor is being teased as a “coming soon” attraction, as well as an “Arena” mode. Given the game’s current issues could be fixed with more varied level design, it will be interesting to see if the level editor can make a difference.

As a whole, Off-Road Paradise seems like a wait and see. As it stands, the game can provide a relaxing few hours if you’re ready to have some frustrating moments with the physics engine and lack of variety. The game comes VR-ready and seems to have a nice base for the Vive and Oculus, allowing players to take over in “God Mode,” which is essentially just a first-person experience.

The game will be regarded as a success or failure based on how in-depth the level-editing system is, and how frequently Ivanovich Games updates Off-Road Paradise: Trial 4×4.