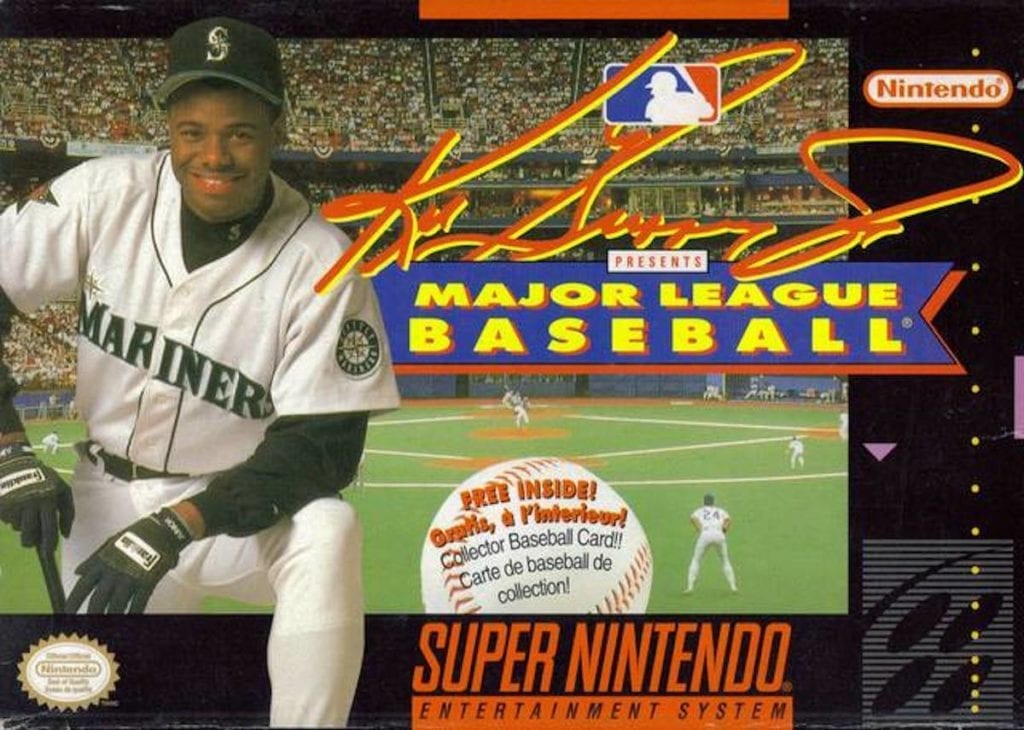 I stumbled across an article from NintendoLife about how Nintendo used to have such great baseball games back in the day. I couldn’t agree more. Long before the single-developer monopolies and feature-rich titles, scores of baseball games were released by a host of publishers to gain some ground in a vastly competitive landscape. Many of these games lacked components that are expected from today’s games: franchise modes, roster moves, player editing, or even licensed teams and players.

For those unfamiliar, in addition to a robust collection of sports titles, Nintendo had a knack for publishing great first-party sports games way back when. The NES had Tennis and Golf before they later grew into their phenomenal Mario iterations. Mike Tyson’s Punch-Out! was a masterpiece that continued as Super Punch-Out!! on the SNES.

However, Nintendo nailed America’s pastime when it released Ken Griffey Jr. Presents Major League Baseball in 1994. The only licensed player was Ken Griffey Jr. (Nintendo owned the Seattle Mariners at the time), but all of the MLB teams, logos and stadiums were included. Real-life numbers and stats from the 1993 season were included, and the easy team editor feature allowed for players to convert their default generic rosters into an accurate MLB landscape in as little as an afternoon. The features list was extravagant for the early 1990s (including one of the greatest video game soundtracks of all-time), and the game was exceptionally popular.

That got me thinking, why doesn’t Nintendo surprise everyone and reboot the Ken Griffey series on the Switch?

Whether it be an MLB-licensed re-release of the exact same game, a stripped-down version that removes the MLB elements, or an entirely updated and re-branded version of the game altogether, it makes perfect sense for a number of reasons.

Sports Titles’ Absence On The Console

Outside of NBA 2K, RBI Baseball, and FIFA, sports titles are few and far between on the Switch. Golf Story is a delightful take on both RPGs and the sport while NBA Playgrounds nails arcade basketball. But there is still a considerable gap in sports offerings on one of the best-selling consoles. The Switch’s sports library will only grow with time, but surprising everyone with a Ken Griffey reboot could siphon players away from not only other baseball titles but other titles altogether.

A Lack Of Variety In The Baseball Landscape

Nintendo would be very wise to offer an updated version of Ken Griffey. To hammer home an emphasis on nostalgia and the many legends unlockable via Diamond Dynasty, MLB The Show 17 made Ken Griffey, Jr. their cover athlete. Additionally, a Retro Mode was included, but it felt like more of a camera and control shift than an actual Ken Griffey competitor. The rebooted RBI Baseball attempted to scratch that nostalgic itch, but a lackluster final product failed to capitalize on The Show’s PS4 exclusivity. Outside of text-heavy sims and previous classics, there are not too many other options for Xbox, Nintendo, or PC gamers. Though, the Switch has Neo Geo’s Super Baseball 2020, which leads us to our next rationale:

We know that classic games are coming for the Switch. However, very little is known about the Netflix-style service outside of its release alongside the Switch’s updated online functionality. Unfortunately, that release is tentatively scheduled for September, which feels like an eternity away and is well into the tail end of baseball season. Why not drop the Ken Griffey remake into a March Nintendo Direct when baseball season is right around the corner? That could keep nostalgia-starved Switch players occupied for a good chunk of the summer.

However, Licensing Could Get In The Way Once Again

The greatest hurdle would unquestionably be acquiring licenses from MLB, MLB Advanced Media (who also create RBI Baseball), and the MLB Players Association. However, the original Ken Griffey thrived on SNES with only one licensed player. The enthralling gameplay and intoxicating presentation did well to absorb players for hours, weeks, months and summers. So why not re-name the 30 teams and divisions to something generic? How tough would it be to expand that team editor to include player abilities and teams themselves? Some color swaps, logo changes and player attribute changes could transform the game. Releasing the game as-is would be a triumph for the platform, but these few tweaks that could put this title over the edge.

Or let’s say they land the MLB license but not the MLBPA license. The Arizona Diamondbacks, Tampa Bay Rays and even Washington Nationals were absent from the original. The Houston Astros, Miami Marlins and San Diego Padres in particular all received tremendous uniform overhauls since the 1994 release. Only 11 of the current MLB ballparks were in the original release. Seeing all of these teams, stadiums and current rosters re-created in Ken Griffey’s iconic art style would really be something, especially Marlins Park’s delightfully odious home run feature.

Oh, and feel free to keep the Montreal Expos in the final version as some sort of obscenely difficult final boss after you win the World Series.