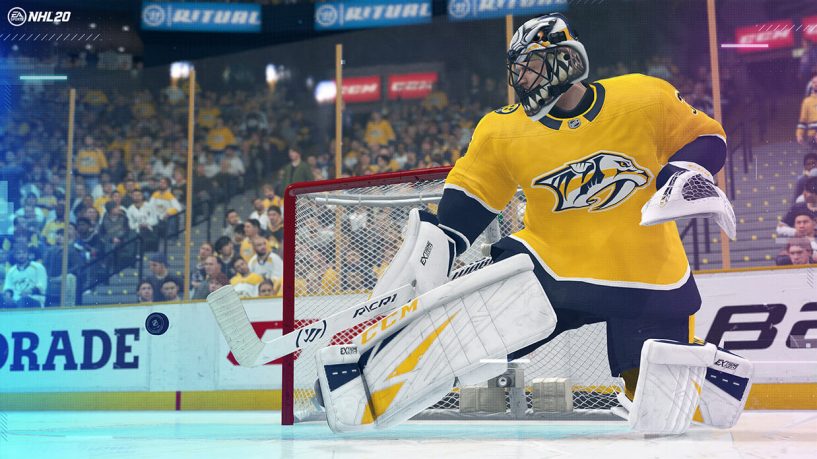 As far as EA Sports games go, it’s always been that the NHL series comes across as a bit of an afterthought to Madden and FIFA, even just based on the resources the company devotes to the games alone. When it comes to the card-collecting modes that have become a lucrative staple of these games, HUT may always play second fiddle to MUT and FUT, but Hockey Ultimate Team has continued to show steady improvement in recent years.

That’s exactly what’s happened again with HUT in NHL 20, where new game modes for both online and offline players have given people more options for how they want to play, while subtle but vital alterations have been made across HUT to keep fans of digital hockey happy. Let’s take a closer look at where things stand this year in HUT across a selection of key areas.

With so many ways to play HUT online at this point, you could make an argument that there are almost too many ways to play against other people. It doesn’t seem all that long ago that Online Seasons was the main place for people to compete against each other. But despite the fact that Online Seasons still exists, it seems to have taken a backseat to other online modes with better rewards.

More recently, Competitive Seasons has become a main focus for players looking to reap the benefits of beating others, as playing well over the relatively short duration of these competitive seasons could put you high enough up on the leaderboard to make it worth your time. Of course, the downside to this is you often find yourself matched against players who might be way better (or worse) than you, making for a rather frustrating (or boring) experience for those who regularly play the mode. It doesn’t take that many games to realize you’re out of your element, especially in the regular HUT Champions Competitive Seasons where only cream of the crop can even qualify to compete.

To remedy that problem, NHL 20 has now introduced HUT Rivals as a way to have you square off against players who are better matches for your skill level, whatever that may be. By dividing all participating players into a number of separate divisions, you’re more likely this way to get to play against people who are at least fairly close to you in terms of general on-ice competence, resulting in more fun and competitive games for the most part. Of course, the best players in the game will still habitually end up collecting the prime rewards at the end of each HUT Rivals week, but there’s more incentive now to play games (win or lose) to better your standing in the division without having to worry so much about being thrown into the deep end against the truly elite teams.

Is it a perfect system? Not exactly. Or, at least not yet. For one thing, the new mode was plagued by a glitch that saw many people playing full games that were not being counted upon completion, essentially wasting everyone’s time in the process and deterring you from wanting to play any more games lest you just end up suffering the exact same fate. To EA’s credit, this problem appears to be largely remedied now, as I can personally attest to not having this happen in the last week or so. However, others have reported playing games that resulted in them losing points in HUT Rivals despite coming out on the winning end. So while one problem may have been fixed, another appears to have reared its ugly head.

With all of these online options, you’d think developers might eventually create one that allows you to play quicker games, perhaps even one-period matches for those who might not have the time to devote to a full one, but that remains but a wish for the time being.

As many ways as there are to play online, there are almost just as many ways to play offline against the CPU if you’d rather not have to pit your skills against others. If you’re looking for a quick and casual game (or perhaps just trying to complete your daily objectives), you may want to try out one of the many challenges that have become a staple of HUT every year. Helpfully arranged by difficulty this year, there are some that can be completed simply by finishing a game on the very undemanding rookie difficulty level while others will have you tearing your hair out attempting to win a game on superstar difficulty. There are also new challenges added regularly that will usually task you with accumulating collectibles that can be exchanged in sets for rewards. Challenges can be a quick and relatively painless way to obtain something for your time investment, but they can also be aggravating when they have you scrambling to complete specific tasks like taking a certain number of shots in a game.

But the biggest addition for single-player HUT this year has definitely been Squad Battles, which sees you playing games against a plethora of teams compiled from the community that range in skill and you can choose to compete against them on higher difficulty levels to earn more Battle Points. With the teams refreshing on a regular basis, there’s plenty of opportunity to rack up points based on your performances in the games and reap the rewards based on how your score stacks up against other players in the community.

It’s imperative that card-collecting modes give you some tangible goals alongside some other lofty ones to keep you coming back regularly, and HUT in NHL 20 does a decent of making you feel some real progress with nearly every game that you play. First off, the daily objectives provide you with very basic tasks that you should typically be able to complete by playing just a couple of games or so. For your efforts, you’ll be rewarded with some coins and a monthly collectible that can be exchanged in sets.

My only real gripe with the daily objectives is that they rotate on a daily basis, and though you’d think it would be a good thing to inject some variety, not all of the objectives are created equal. Some of them — like having to get 15 hits — can take a little longer than others for a player like me who doesn’t tend to use the body all that much.

Meanwhile, the milestone challenges allow you to see how each game and even actions within HUT are getting you closer and closer to some worthwhile rewards. These start slow by doling out loan players for some of the easier milestones. These can really bolster a lineup that probably needs it when you’re first starting out while also letting you test some cards you might want to purchase later. Of course, there are also the more daunting milestones that will take many, many, many games to get close to completing, but the players you will receive for doing so are enticing enough to keep you plugging away.

HUT offers a lot of different ways to utilize sets to improve your team, including exchange sets that you’ll want to use regularly as a productive means of getting rid of some of your lesser cards that are just collecting dust in your collection while not being used at all. The silver-to-gold and gold-to-gold exchanges can often yield some surprisingly good returns, with a large portion of the best cards in my starting lineup having been procured through this method.

Depending on how often you’re able to log on and play HUT, you should be able to acquire at least a handful of monthly collectibles through free daily packs and completing daily objectives so that you can then exchange them for something worthwhile in sets, even if you’re not obsessive enough to get the coveted Icon Collectible that’s available every month for the most devout HUT players.

The auction house in HUT has always had its issues since its inception and this year is no exception. Though it’s entirely possible to find useful cards at valuable prices when searching the auction house, the filtering of those searches still could use some work. It’s not that there aren’t plenty of options when trying to concentrate the results of your searches to include only cards of a certain quality or price range, it’s that there doesn’t seem to be all that much rhyme or reason to how the search results are displayed. Unlike in Madden, the search results aren’t displayed in any sort of descending order when it comes to price, so you’re often left having to cycle through pages and pages of cards trying to find the most bang for your buck.

It’s also probably worth mentioning that some players have mysteriously had all of their coins disappear, which obviously would make it a little harder for them to use the auction house. It hasn’t happened to me personally though, so I’m not sure how widespread an issue this really is.

When you’re doing well in HUT games, it can be some of the most fun hockey action in any video game ever. When it’s going badly, it’s one of the most frustrating experiences imaginable. Some of this can be attributed to questionable AI, as the CPU-controlled players will often not only seem to be on a different page but sometimes it seems as if they’re reading a completely different book than you. This can result in some awful positioning when you’re on the attack or, even worse, having defensemen who pinch so aggressively that they inevitably end up conceding a breakaway at the other end. Goalie AI can be relatively unpredictable, with games often decided by which of the two goalies stands on their head or allows a brutal goal on a seemingly harmless wrist shot from the blue line.

In past years, “skill zoning” has been a prevalent problem among the most competitive players, a technique that would see some users take a decidedly hands-off approach to defense in favor of allowing the defensive AI to do most of the dirty work. It doesn’t seem to be quite as much as an issue this year, however, with CPU-controlled defenders now competently staying with a puck carrier but without being aggressive enough to make it a viable strategy to rely upon them.

There’s plenty here to do, and while the menus are somewhat slow, and HUT doesn’t have some of the flash or sheer number of updates of FUT or MUT, it’s worth checking out if you’re into these modes at all. It’s taken many of the best aspects from FUT at this point, and it’s also tried to carve out its own niche in this space for hockey fans. When you get matched up against a similarly skilled opponent in NHL 20, it’s still one of the best competitive feelings in sports video games. HUT just gives you an avenue to keep collecting and leveling up your squad as you hunt for that next great matchup.