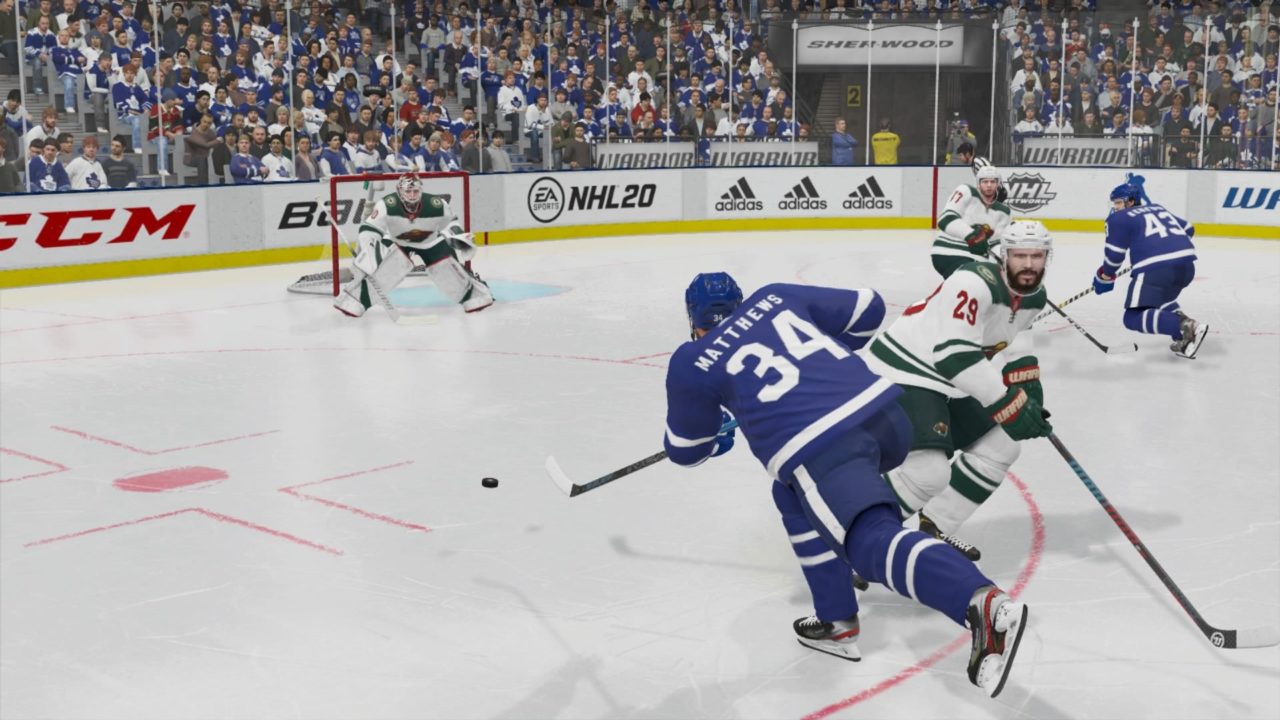 NHL 20 is more enjoyable to play than previous installments but that doesn’t mean it is necessarily penalty free.

A little over a month ago, EA released a short little gameplay video that showed side-by-side comparisons of NHL 19 and NHL 20. The big takeaway from that video was a total lack of control, which basically summed up the disconnect with this series over the last several years. However, while still not perfect, this year the players and controls do feel much more responsive and that allows the series to take some strides in the right direction. 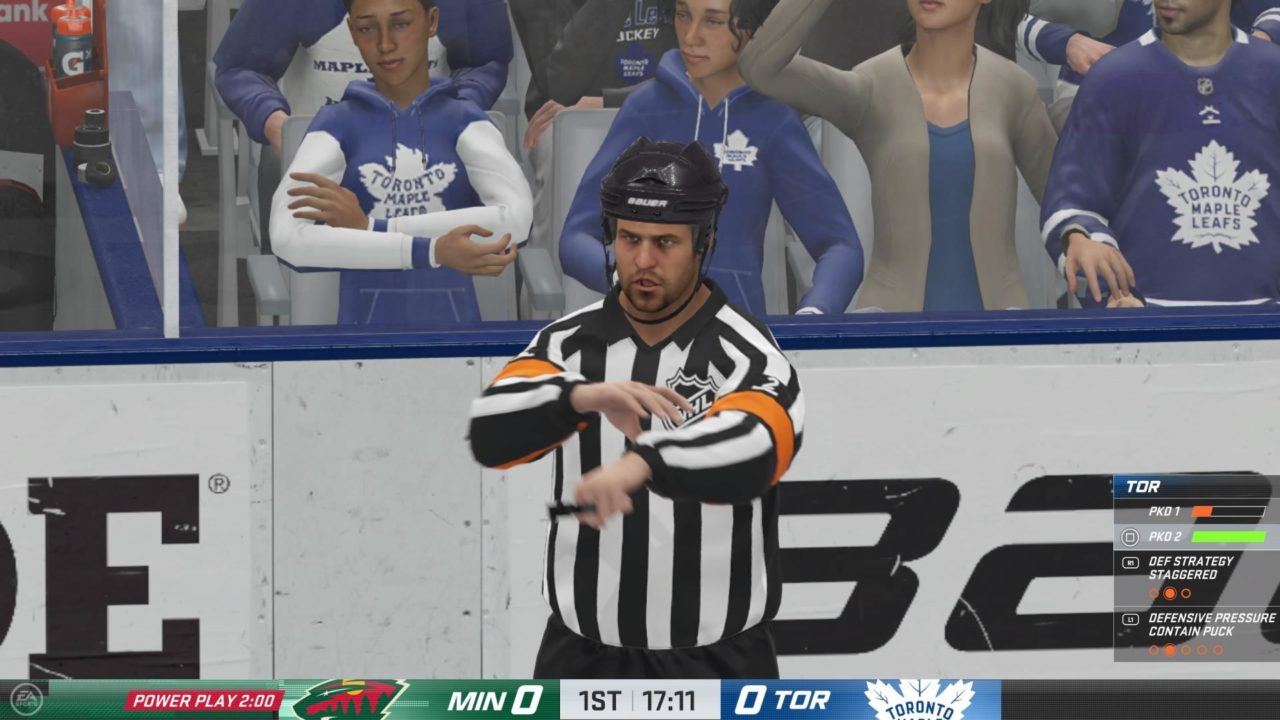 While some early opinions of the new play-by-play announcer, James Cybulski from TSN, have been mixed — with the most notable complaint being he always seems to be yelling no matter how anticlimactic the situation might be — the previous commentary team of Mike “Doc” Emrick and Eddie Olczyk had run its course. Regardless of the opinion on James Cybulski, at least we can say EA is trying to keep the game fresh and interesting, which isn’t something that has been said too often when it comes to the NHL series. Also joining Cybulski in the booth is Ray Ferraro, the previous “third man on the ice” in past NHL games. 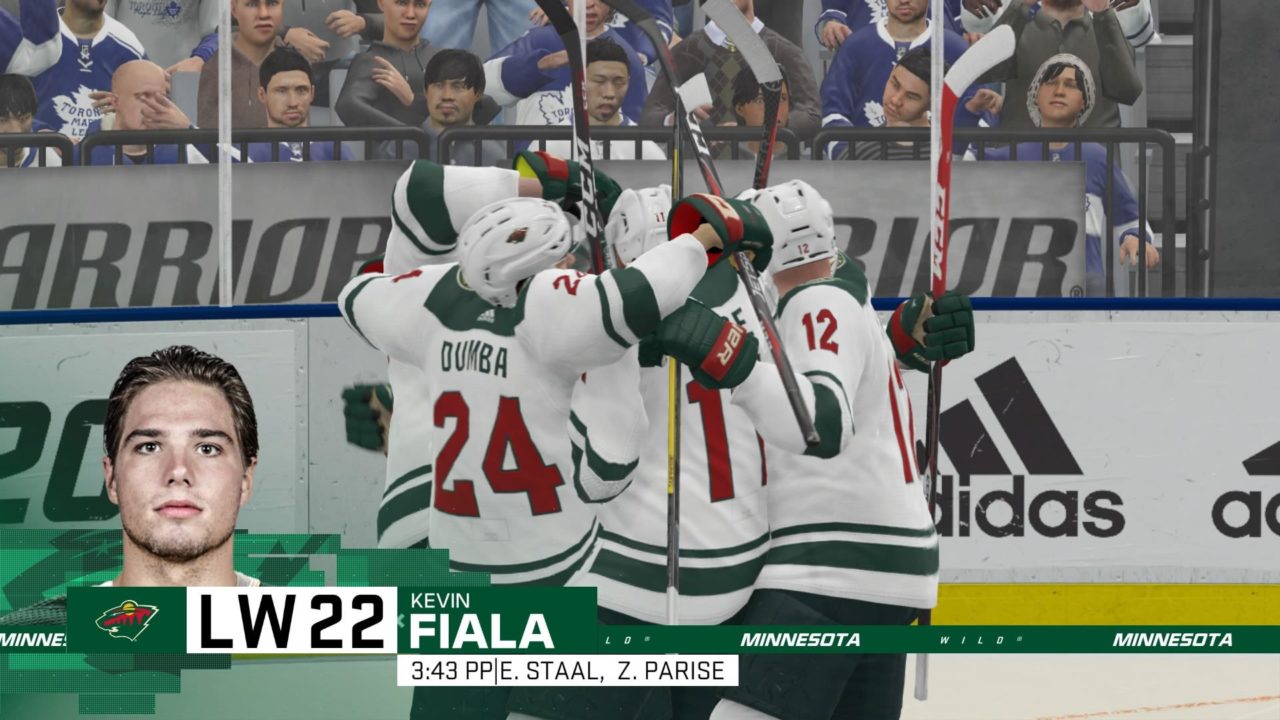 The NBC Sports Network overlay is also gone and replaced by a new EA overlay. There have been mixed emotions on the new clock positioning, now at the bottom of the screen, but it hasn’t bothered me. The new overlay ends each period with a highlight video showcasing big moments, and the slow-mo replay system does a much better job of capturing the play than the previous presentation package. EA stated that by removing the signature NBC presentation it afforded them more freedom in what they could do. Again, nothing super flashy here, but it is nice to see EA trying something new in regards to the presentation.

Perhaps the biggest new inclusion in NHL 20 is the introduction of several new realistic shooting animations that allow skaters to get off shots from a wider degree of angles. In previous versions of NHL, trying to get off one timers was a major headache. In fact, far too often an attempted one timer would result in swing and misses or weak shots if everything wasn’t perfectly lined up. Many (not all) star players have personalized windups and shot motions that help the user feel like they’re actually playing with that player rather than just some generic player. However, several players still do feel similar. 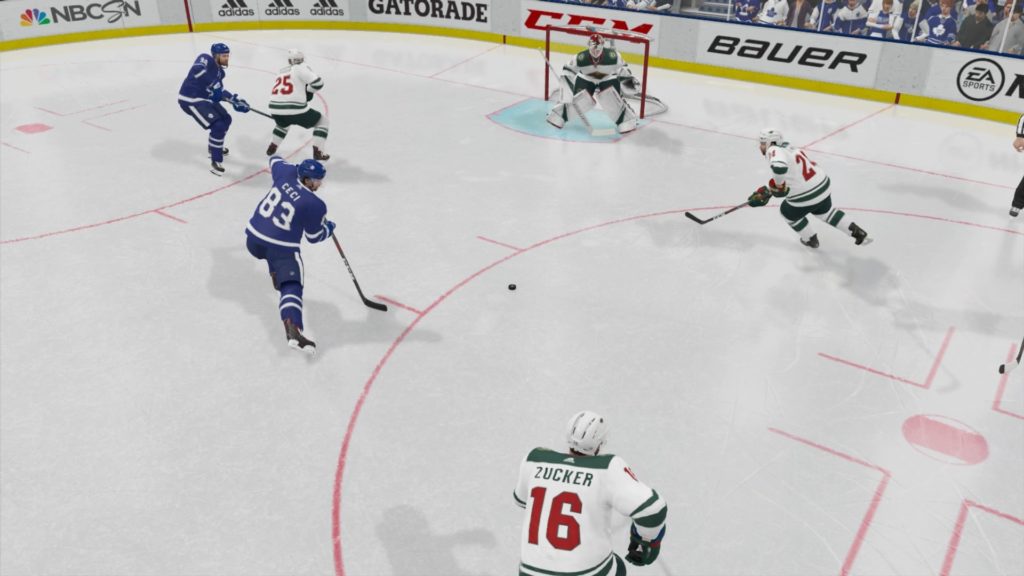 The last line of defense also gets a little love in NHL 20 with a variety of new animations, moves and split-second decision making. Goalies are more aware of threats on the ice and do a better job of deflecting pucks into corners and away from danger. The new animations do not make the average NHL goalie unbeatable or superhuman by any stretch, so it’s a nice new addition of realism added this year, even if they do not always work perfectly. 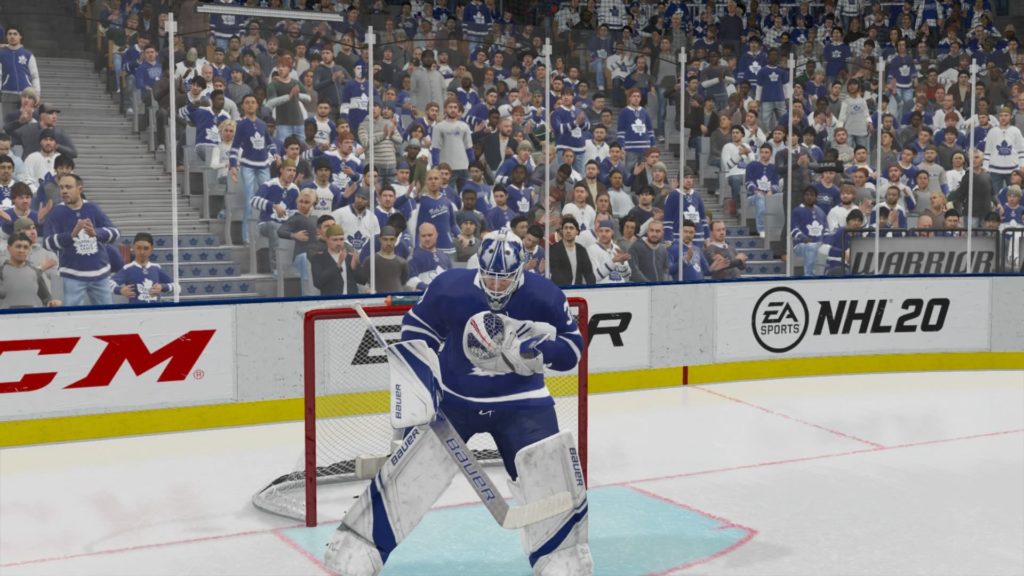 From time to time, the goalies will leave you scratching your head or slamming your controller in frustration. The fluky goals that plagued NHL 19 (and previous versions of the game) are still present despite the renewed focus on this front. Too often the puck will hit your goalie in the shoulder and then trickle in behind him without your goaltender being able to locate the puck. Although these situations do happen less often in NHL 20 it’s still hard to figure out why EA can’t or won’t fix this. Also, the goaltenders occasionally make some odd choices in their positioning. The screenshot below is a good example of that. 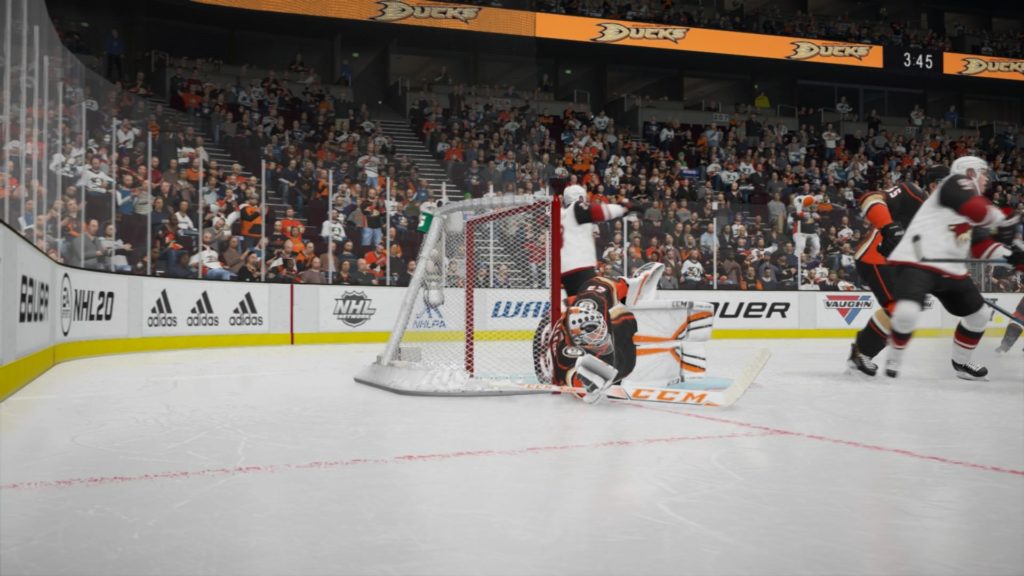 I walked out from the corner with the puck on my backhand and this is how the goalie chose to position himself. I simply took an extra second and sent the backhand shot to the far side of the net for the easy goal.

Starting in NHL 19, franchise mode was focused on in a much needed revamping. This continues in NHL 20 with a new coaching system that affects team building in a big way. Each organization has eight coaches that you can hire and fire at will. Like in the NHL, each coach has his own philosophy of how the team should play, and this affects which players fit into their scheme, how their careers progress, and a big one, the line chemistry among teammates. The coaching system isn’t perfect but it has significant potential. A frustrating aspect in regards to the coaching system is the fact that you can’t hire coaches from other teams, which is the almost standard way the coaching carousel works in the NHL (with the exception of hiring a coach from college or juniors).

More positives include player ratings and contract demands that fluctuate based on their performance. The new trade finder tool is a bit hit or miss. Trade finder helps find takers for players you plan to shop. However, trying to trade star players proves difficult. For the most part though, CPU teams seem much more interested in trading overall. The trade deadline also isn’t as active as it is in the real NHL, though the offseason movement feels realistic.

In NHL 20, the World of Chel features more ways to unlock customization and weekly rewards than it did in NHL 19. The popular NHL Ones mode, which made its introduction last year, is also now playable offline. Expanding on Ones, EA created a Battle Royale mode this year. Battle Royale mode plays as an 81-person tournament called NHL Ones Eliminator that starts with 27 three-person matches and gets shrunk down over four rounds. The new mode uses a single-elimination format, and if at any point you lose you will have to start back at the beginning. In NHL 19, you were able to lose two games in a row, and at that point you were only demoted rather than having to start over. This new inclusion definitely makes the mode more challenging and fun.

The AI is a problem that has lingered in the series for years and years — to the angst of NHL gamers — and doesn’t look to be going anywhere anytime soon. The main issue with the NHL series in my opinion is the AI. The AI is overwhelmingly disappointing in all aspects of the game. Everything from CPU teammates to the CPU opposition is nothing but frustrating. Hockey is such a fast-paced sport where tremendous skill and beautifully creative plays happen in the blink of an eye, and this is where EA falls well short while trying to replicate the real game.

Another frustrating issue in regards to AI and gameplay is the lack of flow. Yes, the game does play like an up-and-down, run-and-gun, arcade-like style. However, to me the speed doesn’t translate when trying to create in the offensive zone or when trying to start a rush. Almost every time your CPU teammates are standing still and flatfooted while receiving a pass or trying to setup a cycle. If you have your system settings set on “leave the zone early,” then your CPU teammates will occasionally catch a pass while moving up ice. In the offensive zone, it is a completely different story. Your skaters are automatically forced to go to a designated area without ever properly reading the play. The freedom and creativity that you see in real hockey is nonexistent in NHL 20 and the series in general. 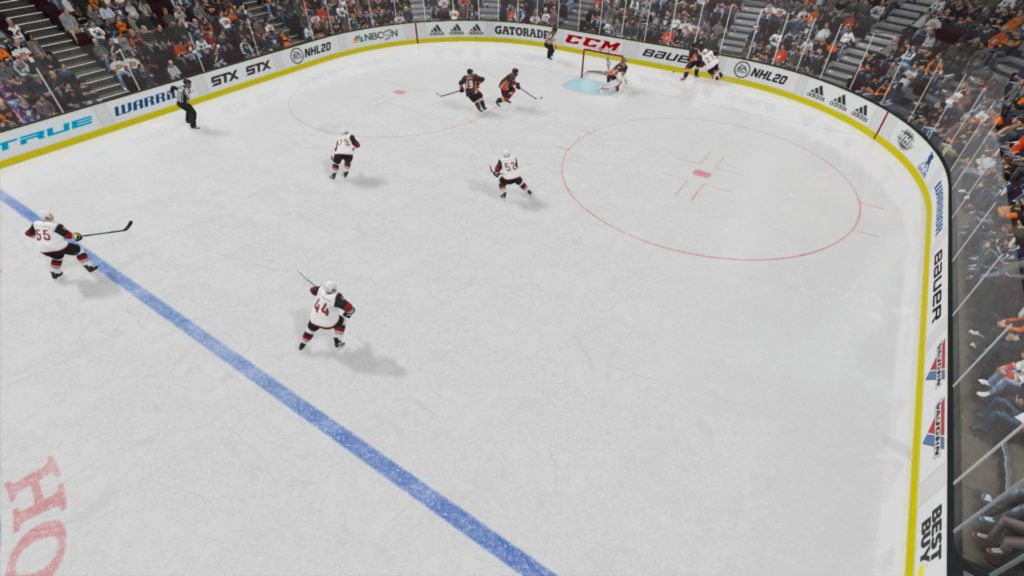 The above screenshot is an example of the horrendous AI that has plagued the NHL series for years. This overhead view is of a 5-on-3 power play for the visiting team in white (human-controlled). The puck is being battled for in a one-on-one battle behind the net (human-controlled). Since the white team doesn’t have clear possession, the CPU teammates all passively retreat, offering no help or support despite having a two-man advantage.

In this short video, a human-controlled skater enters the offensive zone on a two-on-two. The CPU Minnesota defender (captain and elite defender Ryan Suter) is going to start backing up, and while I end the video there, he’s never going to challenge the offensive player. Instead, as you begin to see, he will drift into his defensive partner and out of the play as the clip ends.

Where Are The Box Scores?

A big negative in franchise mode is the nonexistent box score feature that all other sports games have. It’s hard to figure out why such an important feature would still not be included after all these years.

No Changes To Be A Pro

BAP again remains untouched and hasn’t really seen any changes in about six years. Furthering the disappointment is the fact that other EA titles, such as Madden and FIFA, have taken major strides and focused heavily on the story-driven Be a Pro mode in recent years. Now, we all know that the NHL team is the smallest of the EA Sports teams, but it’s still hard to sit by and accept a mode that hasn’t been touched at all while on this current generation of consoles.

EASHL And HUT Seem The Same

It doesn’t seem like anything was done here to add to or enhance the EASHL experience. The AI here in this mode is equally as frustrating as it is in any other mode. HUT is another mode that is relatively unchanged from NHL 19, although there are some minor tweaks in NHL 20. For instance, packs are cheaper this year than last, and there are new legendary players that have been added as well.

Although still not perfect, NHL 20 is a more enjoyable experience on the ice than any of its predecessors. In addition, the new features for the most part enhance the game’s overall playability. However, if you are looking for or expecting true, realistic NHL-style gameplay, then NHL 20 is not the game for you. The same lingering issues still exist here, preventing the series from truly mimicking the real product, and the AI really does single-handedly damper the gaming experience in my opinion. But here’s to hoping EA is on the right track as the studio is finally starting to make strides again.