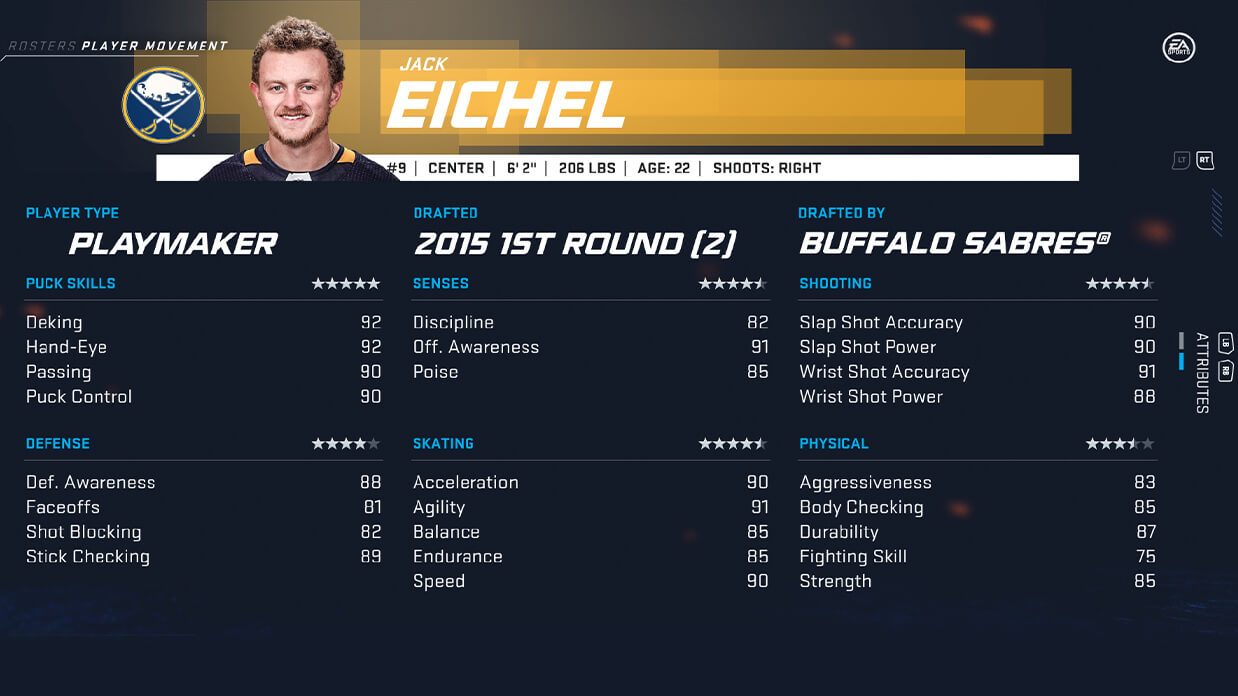 NHL 20 is only a few weeks away from launch and EA has started to release overalls for some of the top skaters in the game. Much like past years, this one is no different when it comes to fans and even the players themselves having mixed emotions about the ratings.

Per the EA NHL 20 website, “NHL 20 ratings highlight the best players from the world of hockey. Overall attributes take into account individual abilities for both skaters and goalies. See who made the list of the top 50 players in NHL 20.”

It is very apparent that the bigger complaint is that all the players feel the same in the game more so than their actual overall rating number, but below I will take a look into each player’s overall to see how accurately or inaccurately EA has rated these players. 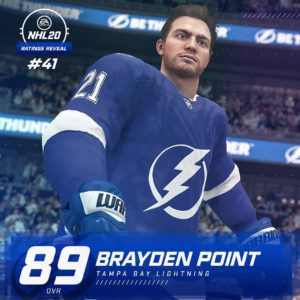 How about this crazy stat for the Tampa Bay forward, Point has increased his point total by exactly 26 points every year over his first three seasons. So, coming off a 92 point season last year is it safe to assume Point’s point total for this upcoming season will be 118? Point only being rated seven points higher than Jack Hughes, who hasn’t played an NHL game yet, seems wrong.

Last year was a bit of a resurgence for Captain Serious setting a career high in points with 81. Toews’ previous career high was 76 points almost 10 years ago way back in 2010-2011. While Toews does bring a lot of intangibles to the table, he was the second lowest scoring forward rated an 88, so it feels as if the 88 overall may be a bit high.

Now headed to the desert, Kessel will once again be the go-to guy. Out of the shadows of Crosby and Malkin, it’ll be interesting to see what type of numbers Phil will put up this coming season. Regardless, Kessel is one of the purest goal scores of his generation. Entering this season, Kessel is just 43 goals shy of 400 for his career and 77 points shy of 900. EA is in the ballpark on this one — maybe a point or two too high.

Eichel really took big strides forward last season besting his previous career high in points by almost 20. Entering his age 23 season this year Eichel has the talent to eclipse last year’s 82 points and perhaps find himself with a rating in the 90s in the not too distant future. EA is in the ballpark on this one too — maybe a point or two to high.

Last season Rielly became the first Leafs defenseman to record 70-plus points since Hall of Famer Borje Salming accomplished the feat in 1980. The Leafs defenseman led all NHL defensemen with 20 goals in 2018-2019, and at age 25 is entering his prime. Rielly is another skater who could find himself rated in the 90s sooner than later. I think EA got this one right.

Out of all the players on this list, who recorded the most points? The answer: Jonathan Huberdeau. Well, technically Huberdeau and Point (they each had 92). Huberdeau reached the 30-goal mark for the first time in his career last season while producing at over a point per game. His 92 points in 82 games was tied for 10th in the league. I think EA got this one right. Maybe a bit of foreshadowing but should Huberdeau, who scored 19 more points than Dylan Larkin, share the same rating?

Every offensive category has increased for the 22-year-old phenom since he entered the league in 2016. Last season, Aho hit the 30-goal mark for the first time and produced over a point per game average. A blossoming star on the come up for sure, I think EA got this one right. 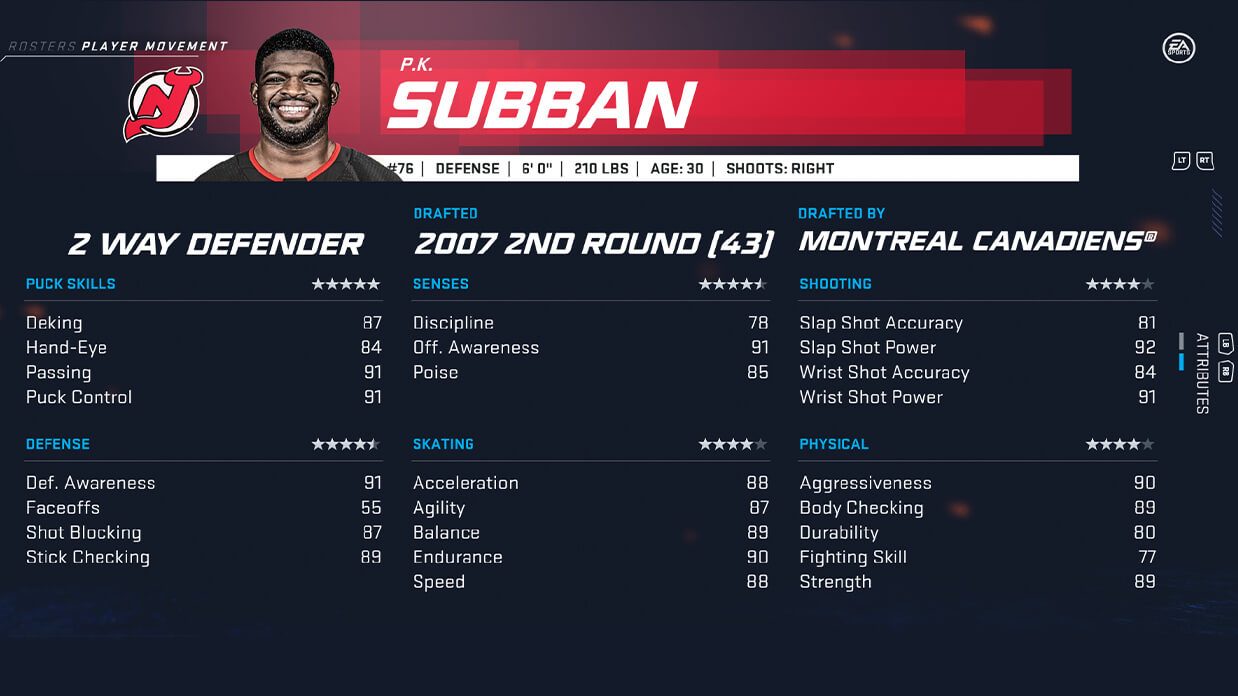 Mr. Personality set career lows in games played, assists and points last season. However, we all know that the talent is there, and at only 30, there should still be plenty left in the tank. Perhaps the change of scenery after being traded to New Jersey will make for a nice rebound season. Immense talent or not though, an 88 overall seems much too high for a guy coming off a season of career lows. EA missed the mark on this one.

The workhorse between the pipes for the Toronto Maple Leafs, “Freddy A” has put up 30-plus wins in each of the last three seasons. The only goalie on this list has been nothing but consistent during his three seasons in Toronto posting save percentages of .918, .918, .917. I think EA got this one right.

Out of all the forwards with an 88 overall who have been revealed so far, Larkin and his 73 points were the fewest, and he was the only one to not reach 80 points. Dylan Larkin is no doubt a young dynamic talent with tons of potential, but the 88 overall definitely seems high. If during this upcoming season Larkin outperforms previous point totals and records 80 points, his overall would seemingly have to go up, right? So, an 89 or 90 overall for a 80-point scorer? Larkin doesn’t seem properly rated in my opinion. Too high.

The Avalanche captain averaged more than a point per game last season recording 75 points in 73 games, but yet he finds himself rated below Dylan Larkin who produced fewer points in more games (73 points in 76 games). Now, granted Landeskog plays on perhaps the best line in hockey while Larkin plays for the rebuilding Red Wings, but still it seems like those two overalls should have at least been flipped.

As a 20-year-old last season, Dubois put up 27 goals and 34 assists for 61 points in 82 games. He also chipped in 5 points in 10 playoff games. A young player for sure but a star in the making, I think an 85 overall was in the area it needed to be while allowing enough room for Dubois to improve. However, I probably would have rated Dubois a point or two lower.

Last season, Dahlin became the fifth defenseman in NHL history to record 30 points before age 19. After his rookie season, Dahlin was selected as one of three finalists for the Calder Memorial Trophy, which goes to the league’s top rookie. His 85 overall rating seems to be just scratching the surface of this teenager’s potential. I think EA got this one right.

Last season, Kadri posted his lowest point total since 2014-2015 but this year he finds himself on a new team, and he does have two 30-plus goal seasons under his belt. The new Avalanche center also plays a complete 200-foot game often going up against the other team’s top players. This rating seems to be on the money.

He’s had back-to-back 30-goal and 50-point seasons, but he’s never had more than 54 points in a season. However, Gallagher is another player who brings a lot of intangibles to a team. The heart and soul of the Montreal Canadians probably got the right overall here.

The 84 overall for Zuccarello is one point less than he was given when NHL 19 was released. In 2017-18, he had 53 points in 80 games and was a top-six forward with the New York Rangers. However, he missed time last year due to injury and still had 40 points in 48 games between his time with the Rangers and Dallas Stars. He added 11 points in 13 Stanley Cup Playoff games for the Stars as well. He was on pace to set a career-high in scoring last year so it seems odd that his overall would decrease. Maybe EA dropped Zuccarello due to his injury problems last season?

JVR’s return to the city of Brotherly Love last season probably didn’t go according to plan as he dealt with a few different injuries, only appearing in 66 games. Despite missing 16 games, JVR still scored 27 goals while playing a decent amount of time on the third line. An 84 seems to be accurate for JVR as he has kind of become a third line/power-play player.

In his rookie season as an 18-year-old, Kotkaniemi had 34 points in 79 games. He was the third-overall pick in 2018 and spent most of the season last year centering Montreal’s third line. Kotkaniemi is the classic case of a super young and talented player with tremendous upside who doesn’t have the necessary accolades for a higher overall. An 82 overall seems to be in the wheelhouse — maybe a point higher than I would have rated him.

Tkachuk finished his rookie season with 20-plus goals, 45 points and 75 penalty minutes — because when you’re a Tkachuk those penalty minutes matter. He finished second in all three categories for rookies. Brady also played on the worst team out of all these skaters, so he had a successful rookie campaign with plenty of room to grow. I could even argue his overall is a bit low considering he out produced the player above him, fellow rookie Jesperi Kotkaniemi, and has the same overall as the player below him, Jack Hughes, who hasn’t played in a game yet.

The first overall pick in this year’s NHL draft is highly skilled and considered to be a franchise center. Since Hughes hasn’t taken a stride yet in an NHL game, there isn’t much here to debate with his overall rating. Last year’s number one overall pick, Rasmus Dahlin, was also rated an 82 at launch. 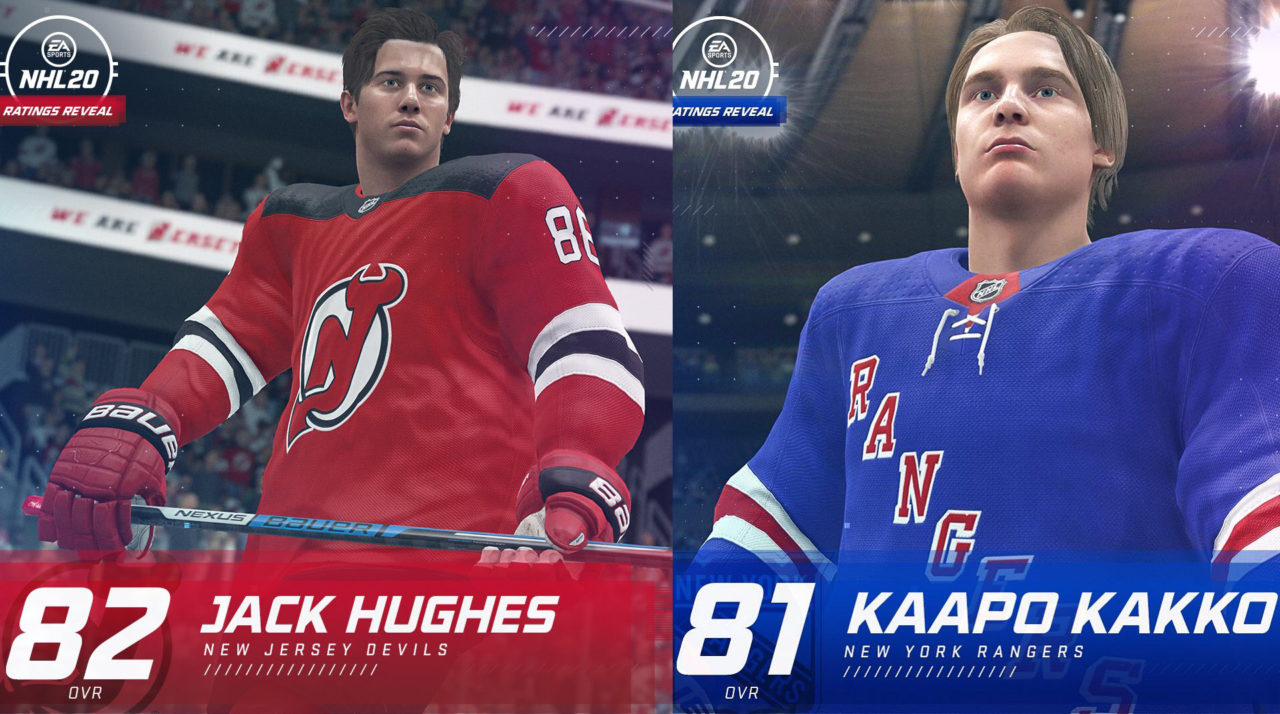 The second overall pick in this year’s NHL draft is highly skilled and was in contention to be the top pick in the draft. Kakko hasn’t taken a stride yet in an NHL game so there isn’t much here to debate with his overall rating.

Thomas was a rookie last season and played an important role in the St. Louis Blues hoisting the Stanley Cup. He had a respectable 33 points in 70 games, which isn’t a bad rookie year, but definitely not anything more than a third-liner. I’d have to say a fair rating for a player heading into his age-20 season.