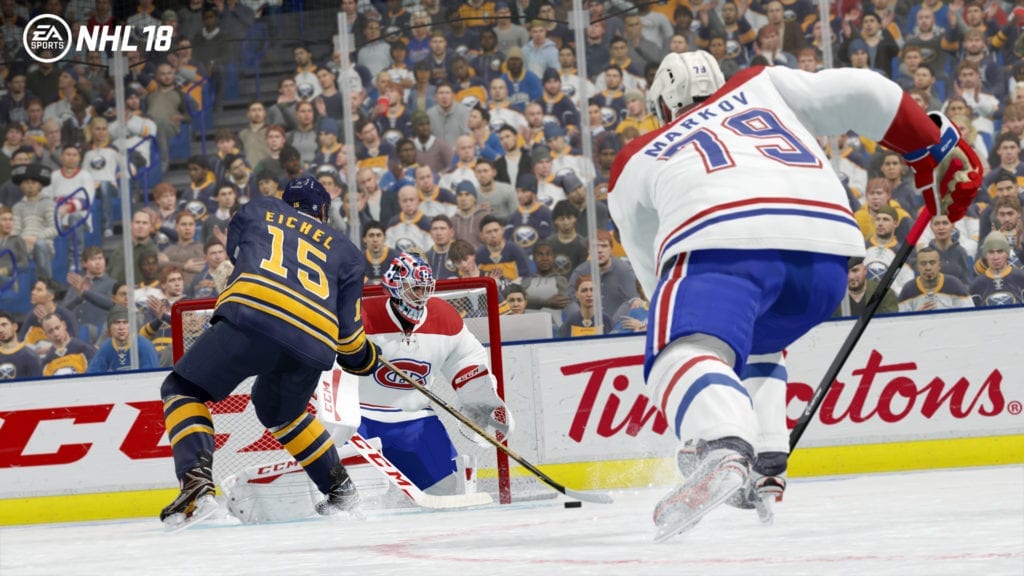 I was a huge fan of NHL ’17, and it was probably my most played title the last calendar year. I was excited to get the opportunity to review NHL ’18, and plan to do so over a series of write-ups, starting with my early impressions of the game.

Note: I played every game on Sim All-Star difficulty using the Skill Stick. I did not adjust anything else beyond that, and only the additional gameplay modes I played would have impacted these settings.

Training Camp is a well done addition that will help narrow the skill gap and learning curve.

Training Camp – While waiting for the game to install, one of the available features was Training Camp. This is a very nice tutorial that is hosted by CEO of Hockey Canada Tom Renney. You have the ability to work on a series of different gameplay elements, and each include a video tutorial that you’ll eventually try and mimic. This feature is well done, and it should help with the skill gap and learning curve for newer players (especially with the new advanced dekes, which are tricky!). These video tutorials are also available in the Coach Feedback section during an actual game and link to the feedback you are given about your play.

Gameplay – I will have a more complete set of thoughts on this later this week, but it’s too early for now to make full-tilt conclusions. I’ll simply say that I love how realistic and sometimes frustrating the game can be on sim-style All-Star. I was trailing by a goal with about 2 minutes left, and missed a wide open net on a backhanded rebound shot that came off my stick poorly. It looked so realistic for a player who was rushing a bit at a golden chance to tie a game late. The players move very fluid, and you can feel the agility of certain players. I really like the tweaks which will feel familiar to folks who’ve been playing the NHL series, but will also feel more refined.

Threes Mode – Sim-style is for franchise mode, competitive is for EASHL and HUT, and arcade is the perfect match for Three’s Mode. Tons of fun, and a bit ridiculous; just the way it should be. I love the announcer, I love how some goals are worth more points than others, and how ever a game that is not tied can somehow end up going into OT. You can play Threes in EASHL, locally, or in a single player Circuit Mode.

Expansion Mode – This is an exciting and bold addition to franchise mode, and I’m happy to report that it works quite well. It’s not as thorough as NBA 2K’s expansion mode last year, but you’re able to venture into franchise mode using one of three choices:

EASHL – I haven’t actually played EASHL just yet in ’18, but that mode is will continue to be a glimpse into the future of sports gaming. I definitely plan on spending a lot of time in that mode, and in Threes when my teammates may not be available for a full 5-6 man squad.

Menu Speed, Pinning – Navigating through the menus is much faster than in the past few NHL games which moved at a snail’s pace. Also, a minor like, but you are now able to control the look of your dashboard by selecting three modes to pin. EA has a reputation of their menus being cumbersome, and NHL ’18 has made some nice enhancements in this area.

Here is the dashboard I was able to create using pins.

Little Caesar’s Arena – The Red Wings new arena is not in the game. Instead we have a Joe Louis Arena with the name stripped off of it, and it being labeled as having an arena age of 0 years. Hopefully this gets patched in as NBA 2K was able to get LCA into their game for the Pistons.

Silhouettes – If a player in franchise mode or elsewhere does not have a player photo, we see a black silhouette instead. This is not something we should be seeing still in a sports title heading into 2018.

Vegas Golden Knights – Ok, a bit unrelated to the game itself, but this has to be the ugliest expansion team in the history of sports. Their name is unoriginal, their logo bland, and their uniforms look like they’re the German National Team. (Editor’s Note: Lay off my beloved Golden Knights Mike)

Mascots – I’m too old apparently to understand why time was spent on something like this.

Slap Shots – I played a lot of NHL ’17, and I have no problems shooting slap shots. However, in NHL ’18 I really need to relearn the mechanics of this shot because for some reason because I’m suddenly awful at it.

AI Breakaways – The AI can definitely put together a nice offense with improved puck movement, but they are pitiful on breakaways. I’d like to see them be a bit less efficient while generating offense in the zone (less shots on goal), but more deadly when you find yourself in an “Oh s%&#” moment.

Customization – The NHL series is overdue in implementing some sort of sharing feature for custom rosters, sliders, and custom logos and other visual designs. While it’s doubtful something like this would ever be patched in, perhaps we’ll get lucky with something here.

He scooooooooorrres! – The commentary will sound familiar, but I have heard some new and very nice goal calls.

Presentation – You’ll see some new camera angles before a face-off, but presentation during a game will feel very familiar.

HUT Challenges – HUT has added what is called HUT Challenges. I have not played this mode yet as the servers weren’t letting me connect when I first tried, but I believe they are up and running now. Stay tuned.

Overall, I’m really happy with the game. NHL 17 was my favorite game last year and thus far, NHL 18 seems to be following a similar path. I’m excited with the direction this game is headed, and the early returns point to me recommending this game for folks who enjoy hockey and/or want to try a sport that moves at a faster pace.

We’ll have a lot more coverage this week of NHL 18 and what its bringing to the table, stay tuned!

NHL 18 Trial Available For EA Access Subscribers, Post Your Impressions Here
Expansion Is A Welcomed Addition to NHL 18's Franchise Mode, But Much Left to Be Desired