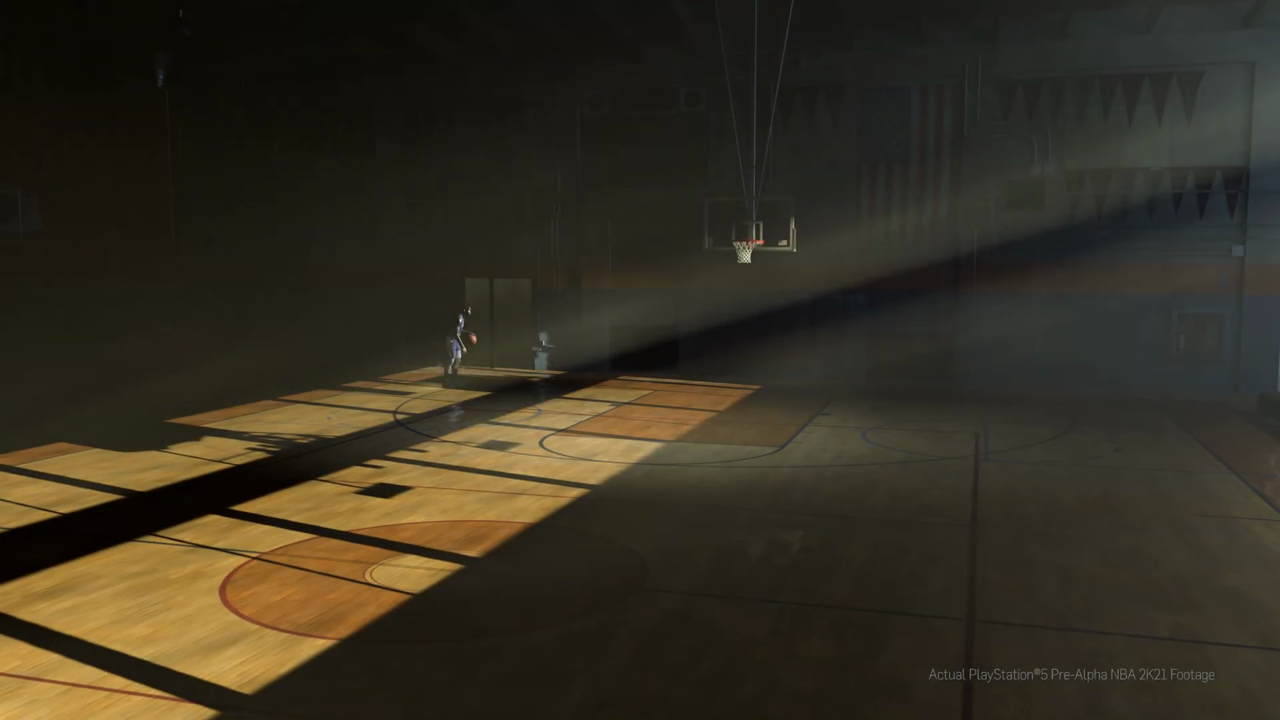 During the past few weeks, in anticipation of the launch of the PS5 and Xbox Series X, we’ve looked at a number of current games and how they made the leap from one console generation to another. We’ve covered a lot of the major sports games that exist today, but there are a few games that didn’t make any appearances on the PS4 or Xbox One. These games did not show up not because fans didn’t want them but because, well, legally it was a messy issue.

We don’t know if they’ll show up on this generation of consoles either, but we wanted to start by thinking about what a next-gen College Hoops 2K might look like. This series last made an appearance in 2007 as College Hoops 2K8, a game I still play to this day.

As previous articles in our hypothetical next-gen series have stated, the Xbox 360 essentially had a year headstart on the PlayStation 3, so I’m taking into account the first release on both consoles. But a lot of the big changes outside of graphics came with the end of the 2K/ESPN partnership, which ended with College Hoops 2K5.

All but one year of the PS2 era involved a 2K partnership with ESPN. This included the on-air score bug and other graphics you’d see on a broadcast. This was the same on 2K’s NBA, NFL and MLB titles at the time. The commentary team was Mike Patrick and Jay Bilas. As the ESPN partnership ended across all games after 2K5, the in-game TV-style graphics shifted to a non-network look. Patrick and Bilas were replaced with the CBS pair of Verne Lundquist and Bill Raftery. Raftery later “double-dipped” and made an appearance alongside Gus Johnson in EA’s NCAA Basketball 10.

College Hoops 2K6 on the PS2 introduced the concept of pre-determined player head models. They weren’t editable, but there were about 600 of them in the game which was enough variety for the era. It was similar to the coach heads we have currently in NBA 2K. The PS3 version had fully editable heads, but they weren’t as distinct. We can compare this to College Hoops 2K5, which had seven editable head models for created players.

In the upgrade to the next generation, we obviously had improved graphics. The recruiting process remained the same, but the shot stick was added. Both the shot stick and the graphics were things that were added to NBA 2K6. College Hoops 2K6 even added some real head coaches and more classic teams were introduced. On College Hoops 2K8, cover athlete Greg Oden even appeared with Mike Conley on the 2006 Ohio State classic team, with their names and faces.

Unlike other articles in this series, we don’t have a game on the current generation of systems to draw from. Luckily, NBA 2K can be used somewhat as a comparison. During the PS2/Xbox era, and early on in the PS3/Xbox 360 era, the game looked remarkably similar in terms of visuals and gameplay. The big differences came in modes that revolved around the differences in the collegiate and professional versions of basketball.

If a college game had existed on the PS4/Xbox One, we probably would have seen some of the same things from NBA 2K appear in College Hoops 2K.

Overall, I would have expected to have a college game that worked in conjunction with its professional 2K counterpart. For one, the MyPlayer experience would have been across both games. Instead of the NBA 2K MyPlayer mode being heavily focused on a story that happens before your player gets to the NBA, it would start in “College Hoops 2K21.” The one issue here would be that the NBA game has always come out before the college game, but I think they’d find a way to make this work. This would ideally free up space in the NBA game for a more robust storyline while you’re in the NBA.

A lot of the stuff we’d get in the PS4 era would be what was mimicked in the NBA games. It just so happens Kevin Harlan, Chris Webber, Steve Smith, Clark Kellogg and Grant Hill are all part of the CBS/Turner NCAA coverage as well. So the jump over to college basketball audio is minimal — and I say minimal as if I’ve ever spent extensive hours recording video game audio.

One of my favorite features in College Hoops is the NCAA Tournament Selection Show. It was hosted by Greg Gumbel and Clark Kellogg, which was accurate at the time. This could be updated to the Ernie/Shaq/Kenny crew, as their roles have been increasing in the real-life selection show. 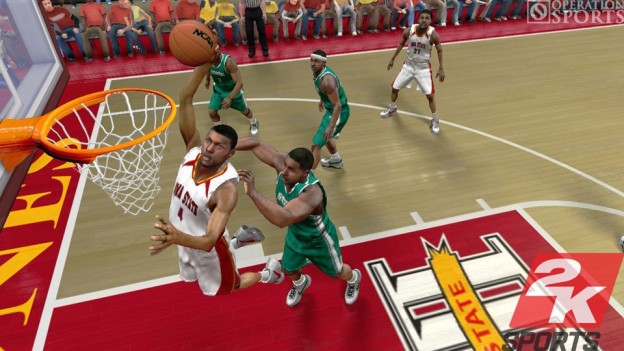 I’m not sure how different some sort of The Park/The Neighborhood mode would be in a college game. Instead of VC, maybe you trade some of your jerseys for tattoos. As NBA 2K becomes more and more about making as much money as possible at all times, it’s hard to see their reasoning for making a college game again without a mode like this. To justify the game’s existence, the mode would have to different enough to get the game off the ground.

MyLeague’s college equivalent would be the real game changer. College Hoops 2K8 offered users the opportunity to move schools around in a conference, but only before you started any sort of career mode. You were not able to change the size of a conference. The later installments of NCAA Football offered users the same ability, but it could happen inside the mode itself. You could also increase or decrease the size of any conference. I think by the end of this generation we’d be able to edit the size, specific teams and schedule length of each conference. 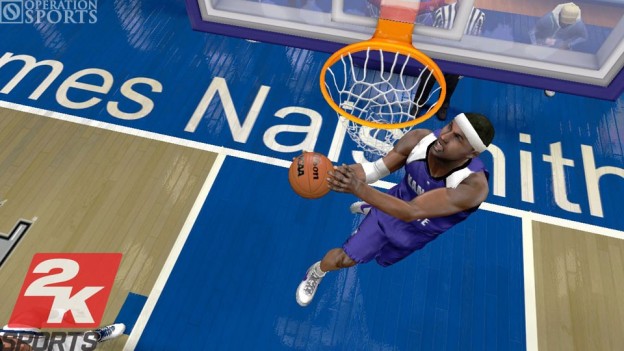 Something that happened in college basketball itself that changed the game entirely was the introduction of the transfer portal. This would be a key thing to implement to the game to re-create some of the off-court madness of college basketball. “Transferring Up” as well as the sheer number of transfers weren’t as prevalent when the last college hoops games existed. Something similar to the player morale system in NBA 2K could be a good part of that.

The recruiting model used in College Hoops 2K8 was used in the PS2 era as well, and I think it works. But we saw NCAA Football simplify their recruiting mechanics to good success. I think this would be at least an interesting idea. The transfer portal would be part of the recruiting process and so would recruits opting for professional options, whether it be the G League or options overseas. The equivalent of creating a draft class would be to create a recruiting class, or at least have a fully editable recruiting class.

Something that happened in 2K games specifically on the PS4 generation was the implementation of rule changes. Imagine things like changing the length of the shot clock, eliminating the one and done rule, requiring recruits to stay for two or three years, expanding or shrinking the tournament, removing automatic bids, etc. The possibilities are endless. This would be a very fun feature on the college side.

PS4/Xbox One To PS5/Xbox Series X

On the PS5/Xbox Series X generation, we’d again get some of the same features of the NBA game. The recently added Brian Anderson and Allie LaForce are also part of the CBS/Turner college basketball team. NCAA Basketball 10 was the first game to have two announcing crews, and that happened on the PlayStation 3. If they wanted to diversify their announcing team more, you could see them adding some sort of ESPN group. This would offer two unique broadcast packages but I’m not sure it’s necessary.

I think an addition to MyLeague for College Hoops that would happen a generation late is the ability to expand. About every five years, we get a handful of teams joining the ranks of Division 1 college basketball. With the sheer number of teams, space might be an issue, which is why this addition would appear here. I think an addition of some women’s teams would be smart as well.

The elephant in the room for any college game continues to center on player likenesses. In terms of classic teams, College Hoops 2K8 had two real players with names and faces. So if the players sign off, it shouldn’t be a problem for classic teams — just like in NBA 2K. But for the rosters themselves, that’s hard to project. The 2K team isn’t going to scan 15 guys on 300+ teams. And that’s if they’re even able to get the rights to all of them. The create-a-player capabilities are going to have to improve if we’re going to have a whole game full of CAPs. Can we edit the players? Are rosters shareable? The more I think about it, the more questions I have, as I’m sure the makers of the game would.

What To Expect From Next-Gen College Hoops 2K?

It seems we’re at least two years away from any college sports games returning. There are significant hurdles to clear in regards to licensing alone. But it’s simultaneously fun and sad to think about what the game could be, especially considering its virtual cousin, NBA 2K, has some very fun features. All we can do is remain hopeful that at some point the College Hoops 2K franchise will return to school rather than going pro.