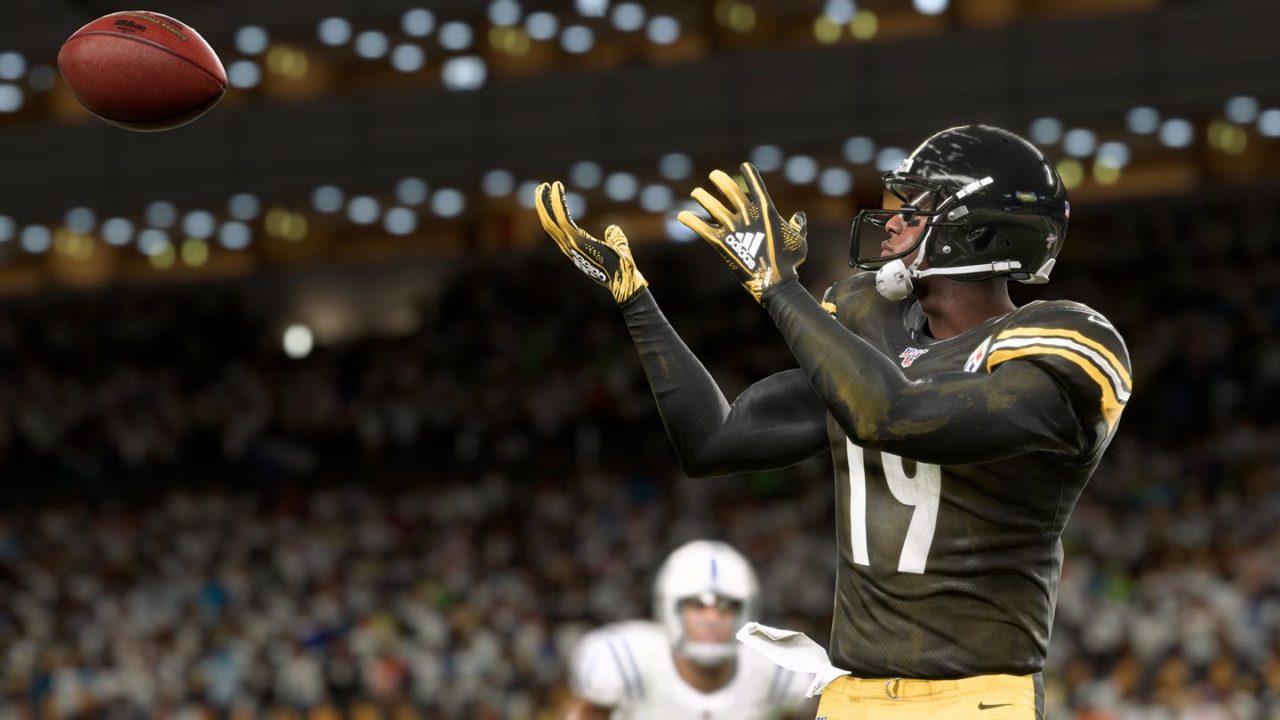 On a livestream broadcast of EA Play from Los Angeles, Adam Rank and and some guests gave fans a first look at what’s in store for the upcoming Madden 20.

Community manager Israel Cruz announced that gameplay was what fans indicated they wanted to see most at the event, and there were glimpses on display throughout of the subtle improvements in on-field action as a handful of different new features were discussed.

There wasn’t really a ton of new info to add to what has already been released regarding the new Face of the Franchise mode. This will have you taking control of a quarterback in college, experiencing the thrill of being drafted by an NFL team, and having to navigate the trials and tribulations of leading a team throughout your career. A scenario engine will present dynamic challenges that will need to be completed in order to have your player improve week-to-week. To help illustrate the idea behind the new mode, EA presented a short video of Madden 20 cover athlete Patrick Mahomes discussing his own transition from college to the NFL.

In a bid to have players feel more like superstars on the field, Madden 20 will provide its elite players with certain X-Factor and Superstar abilities. Pittsburgh Steelers wide receiver and renowned video game fan JuJu Smith-Schuster was on hand to help explain how superior skills will translate to the game. By achieving certain objectives, players will be able to get “in the zone” that will give them a boost in certain attributes that vary depending on a player’s strengths.

Mahomes, for example, has Superstar abilities like Dashing Deadeye and Red Zone Deadeye that allow him to have perfect accuracy both on the run and in the red zone respectively. He also has a No Look Dead-Eye ability that comes with its own signature animation. Other new signature animations in Madden 20 include realistic throwing motions for six to seven of the NFL’s best quarterbacks and Ezekiel Elliott’s trademark “Feed Me” post-play celebration/command. To counteract these offensive weapons, defensive superstars like Aaron Donald have their own X-Factor and Superstar abilities as well, and they can complete objectives of their own to knock offensive superstars “out of the zone.”

Senior gameplay designer Clint Oldenburg described some of the more noteworthy changes to the gameplay mechanics this year. These feature a quarterback scramble mechanic that will allow you to remove the passing icons with a push of a button so your QB can have the full array of options as a runner, and a welcome pump fake mechanic that makes pump faking to a receiver as easy as double-tapping an icon. This will come in especially handy when you have second thoughts about a throw or can also be deployed tactically on double moves, like the stop-and-go route by a receiver.

Playbooks sound as if they have been greatly expanded for Madden 20, with the RPO (or run-pass options) finally making the leap from the real NFL to the video game. With three different types of RPOs and 220 total RPO plays in playbooks in the game, it’s seems to safe to assume that they’ve got their bases covered there. But they’ve also added other unique formations and trick plays to a coach’s play-calling arsenal as well, including jet sweep touch passes and the ability to the execute the famous Philly Special play that the Eagles deployed to help beat the Patriots in Super Bowl 52. Perhaps the most exciting news on this front though is that playbooks will be updated throughout the season to reflect any new shifts in philosophies that should occur in the NFL.

The only real mention of Madden Ultimate Team mode was the introduction of a guide/information hub that will seek to make it easier to find the best challenges and players to improve your Ultimate Team.

There will be a closed beta for Madden 20 from June 14-16, with codes set to be available through various social media channels.