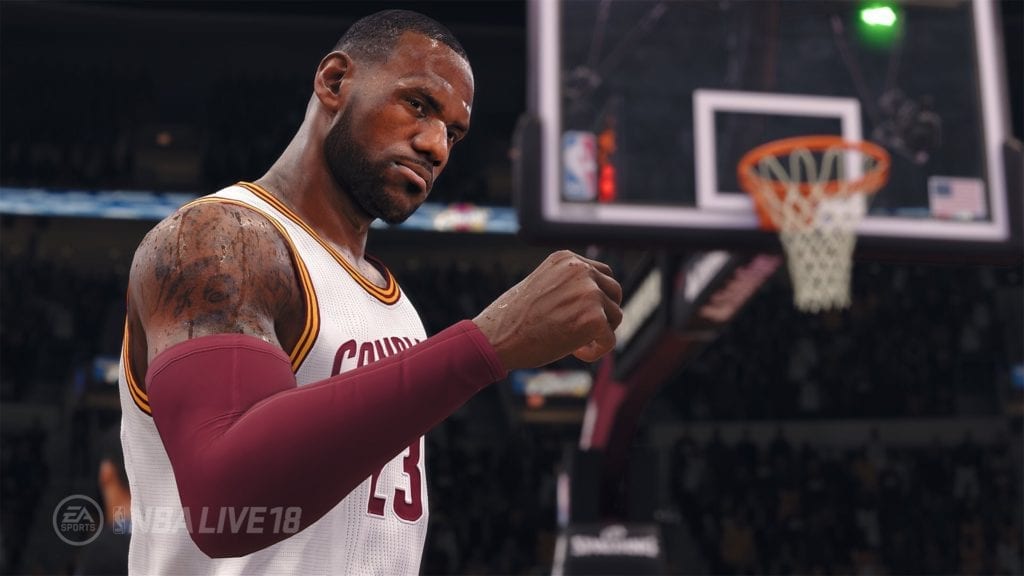 NBA Live 18 has been out for almost three weeks now. If you’ve yet to take the plunge, you might be looking for reasons to give Live a try. There are many reasons to consider, but here are the top five.

This will apply to you only if you’re a fan of and familiar with other basketball games. Whatever your opinion is of those games, you’ve built up a familiarity over the years. No matter how much you like a franchise, it can start to feel too familiar, to the point of getting stale. That’s where Live 18 comes in. It feels like a fresh take on virtual basketball.

This isn’t about which game is better in any particular area. Live simply plays different than 2K. There are things I love and hate about both games. But after so many years in a row of 2K, it’s nice to play a game that was created with a fresh set of eyes, so to speak.

This is especially apparent when you’re in the middle of a game. You might be conditioned to handle a certain in-game situation a certain way, only to discover a new way to handle it with Live. For example, let’s say you typically tend to ignore when your center calls for the ball down low, for any number of reasons: style preference, lack of confidence or success, or not liking the way the computer reacts when you’re down low. Live gives you a reason to reconsider. Because the game feels differently, it plays differently, which then leads to different results. It will take you out of your comfort zone, but in a good way.

I’ve always enjoyed playing on the wing more than in the post. And even as someone who does drive and kick a lot in game, for whatever reason, I’ve always had more fun with trying to get open for a quick jumper than I have with driving through the lane for a dunk. There’s something about bringing the ball up the court, passing it to the side, and watching the play develop as your SG curls off a screen and is wide open in the corner for a three. Or even playing a little hero ball, juking your defender out and nailing a step back jumper in their face.

Fortunately, this is one of the things Live does well. The shot meter helps you time your shot to release it at the perfect time. As you rise up, the meter appears with a bar that quickly starts to rise. Release the shoot button with the bar as close to the top of the meter as possible, with the goal of a perfect release. It’s not necessarily a pretty sight, but the meter isn’t intrusive at all. After a few plays, you’ll find yourself used to it and, of course, relying on it.

Not As Much VC Hustling

This is absolutely a case of “they’re not as bad as the other guys” because it’s not that Live lacks any sort of in-game currency and, as a result, can claim some sort of moral high ground for not asking buyers to spend more money after purchasing the game. After all, if you want to quickly open a handful of packs of cards in Ultimate Team, then you will be spending cash. However, it doesn’t bleed over into the career mode, The One.

And for this longtime 2K fan, playing a basketball game — specifically, the career mode — and not having many critical parts of the experience locked behind in-game currency is refreshing. And yes, this is based 100 percent on feeling and not raw data, but it feels — so far at least — that Live’s career mode was designed to be experienced best by everyone, whereas with 2K it’s best if you drop some cash to try and catch up with everyone. That matters a great deal, particularly if you’re starting fresh at the finish line a few weeks after release.

The One is my absolute favorite part of NBA Live 18, and the Pro-Am Tour is a big reason why. Whereas Live Events and Live Run focus on online play, the Pro-Am Tour is the offline mode, and it is plenty deep. There are five different stages, so to speak. Each stage has two sets of games to play: tournament and non-tournament. For the non-tournament games, your goal is to win these games, of course, but also to complete three specific challenges each game. Games range from easy to hard, as do the challenges.

The same is true for tournament games. Win all of the games and you unlock a special reward crate. Complete all of the in-game challenges and win another special reward crate. Easier challenges might be to get one more assist than a specific player. Harder challenges might be to get more combined rebounds than Joel Embiid and Ben Simmons, which is a *cough* tall order when you’re a shooting point guard.

The stages will take some time to get through, especially if your goal is complete all of the in-game challenges. Some of the more difficult ones will necessitate some replay. So far, I’ve been doing my best to complete the challenges, but my main goal is to win. Playing through a “second time” while focusing on completing all of the challenges to get more crates will definitely add a lot of replay value.

One of my favorite aspects of NBA Live 18 is the way you go about upgrading and leveling up your created player in The One. Instead of upgrading specific attributes, you focus on primary and secondary skills, upgrading each as you earn skill points with your play. It has more of an RPG feel in that sense, which isn’t something you’d expect from a basketball game, but it works. The skills available to you will depend on the play style you chose at the beginning.

With that play style, you’ll also eventually unlock three trait slots. There are over 50 different traits in the game, each one progressing from bronze to silver and finally gold. The best part? You can change which traits are applied to your player before each game. So if your team needs a rebounding boost one game but more shooting the next game, you can accommodate.

To be clear, changing traits from game to game won’t turn your SF from a ball-handling wizard one game to a shot-blocking maniac the next game. They do not drastically alter your player type. Rather, they are temporary attribute boosts that you can strategically apply based on the make up of the team you are on and the team you are facing. It’s a nice touch, and I’m excited to see what Live does with this down the road.

What about you? What do you like most about NBA Live 18? Let us know in the comments!