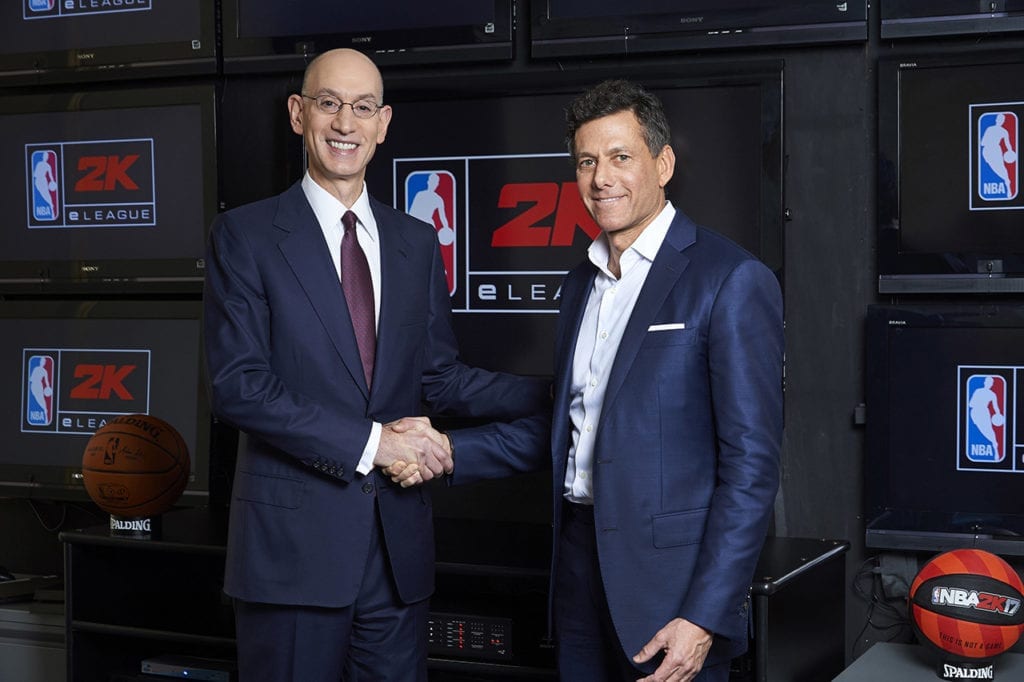 As pictured in the image above, Take-Two CEO Strauss Zelnick, joins NBA Commissioner Adam Silver, at the league’s headquarters in New York, N.Y. on Wednesday, February 8th, 2017, as they announce plans to launch the NBA 2K eLeague, a new, professional competitive gaming league. NBA 2K eLeague will bring together the best basketball gamers in the world, and marks the first official eSports league operated by a U.S. professional sports league.

Set to debut in 2018, this groundbreaking competitive gaming league will consist of teams operated by actual NBA franchises. The founding teams, each composed of five professional eSports players who will play the game as user-created avatars, will be announced in the coming months. The NBA 2K eLeague will follow a professional sports league format: competing head-to-head throughout a regular season, participating in a bracketed playoff system, and concluding with a championship matchup.

“We believe we have a unique opportunity to develop something truly special for our fans and the young and growing eSports community,” said NBA Commissioner Adam Silver. “We look forward to combining our best-in-class NBA sports team operators with Take-Two’s competitive gaming expertise to create a brand new league experience.”

“We are proud to expand our strong relationship with the NBA and co-create the NBA 2K eLeague,” said Strauss Zelnick, Chairman and CEO of Take-Two. “Through the NBA 2K series, which is renowned throughout the world for capturing the authenticity of the NBA and the passion of its fans, we have a proven track record of highly successful collaboration. With this new venture, Take-Two and the NBA aim to fuel the accelerating growth of eSports and take the thrill of competition to exciting new heights.”

The relationship between NBA and Take-Two dates back to 1999, with the NBA 2K series selling over 68 million units worldwide. The most recent release, NBA 2K17, is the highest-rated annual sports game of the current console generation and the highest-rated title in the history of the NBA 2K series.(1) To date, NBA 2K17 has sold-in nearly 7 million units, and is poised to become 2K’s highest-selling sports title ever.

In December, 2K launched its second official eSports competition, NBA 2K17 All-Star Tournament, which offers teams of gamers the chance to win a trip to NBA All-Star 2017. The 5-on-5 tournament, featuring a $250,000 grand prize, will culminate on Feb. 17 in New Orleans.