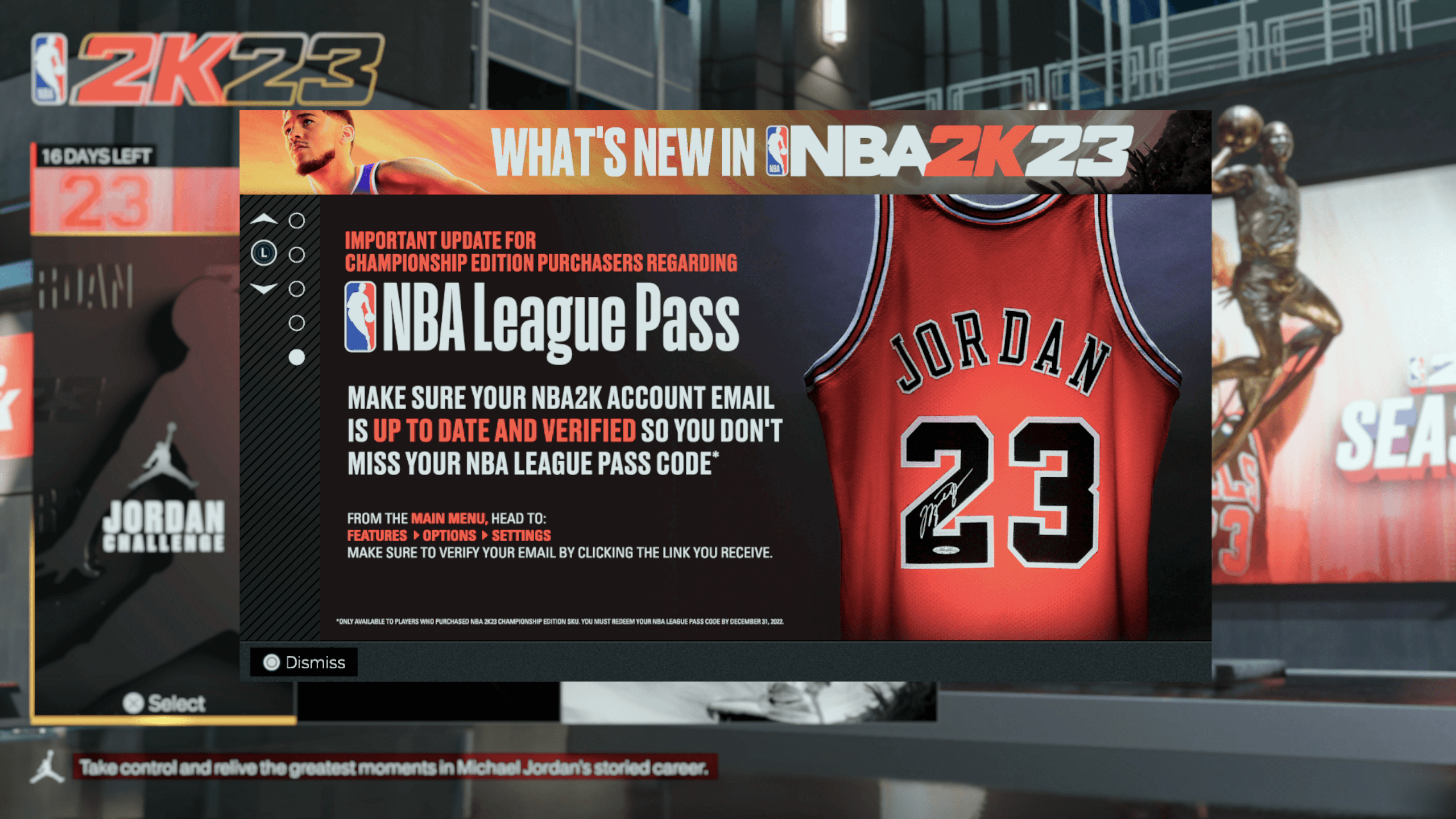 The rollout for the NBA 2K23 Championship Edition NBA League Pass codes started last week. Over on the OS forums, folks have been talking about that process and whether it has gone smoothly or not for them. Some users have had no issues, while others are still struggling to get their codes, so I thought I would showcase a couple different posts to help out anyone who is maybe having issues right now redeeming the code. 2K Support is still who you should be reaching out to with problems, but feel free to head on over to the OS forums to troubleshoot there as well.

A couple users seemed to have an issue with 2K’s instructions. OS user simbayless was among the users who explained how they fixed their issue by putting in the code for the “yearly” pass not the “monthly” pass for NBA League Pass:

I just received my code. But the email says go to monthly pass but my code didn’t work until I put the code in for year pass then it worked — just in case someone got confused.

This seems to have worked for others as well, but OS user bigsmallwood only could get the League Pass code to work for “monthly” and for the lower cost version of League Pass:

I got my code and it glitched out and did not work the first time. Second time around it worked but only for the low end of the League Pass and monthly. Wish their instructions were more explicit, but we made it!

The monthly vs. yearly debate continued on with Coach2K and FloorGeneral explaining how monthly worked for them:

Yeah monthly, NOT yearly worked for me as well. I tried yearly first cause everyone said that’s what was working, but it just gave me invalid code. Putting in monthly worked though. Gives you 12 months for free. You need to put some kind of (valid) payment info in or it won’t let you subscribe. However, you can immediately cancel your subscription so there’s no chance to get blindsided by auto-renewal next year. Don’t worry about canceling, as your subscription will be valid for one year from the date you redeemed the code.

If you’re having problems getting/finding the email, first obviously make sure the email is verified (settings in the game and they’ll send you a link). If this was done already, check your spam folder. I had the kid buy it so he could have all the VC and stuff as I don’t need it, and he found the code in his spam folder.

OS user Agame had an issue with their email in that they could not get the MJ image to display. The NBA League Pass code comes at the bottom of an MJ pic within the email, so they had to go over to mobile to finally get the image to display properly. The code being embedded in the image is probably done for some security reason, but this is not the first time codes being embedded in an image rather than also being in the body of an email has caused issues.

Another small issue that seems to be popping up is if you did not yet activate the bonus content codes that came with your game at launch. If you never activated them, Quentin32 explains that they now need to wait seven days from the day they activated those codes in order to get the League Pass code.

If you don’t activate the bonus content codes, you won’t receive your LP code. It will take 7 days to receive the code if you waited like I did SMH.

Lastly, some people just flat out did not receive their codes in their email. 2K has been clear about making sure your email is updated in-game. To do that, go to Settings in-game, and then scroll down to make sure your 2K Account Email Address is the one you want, and then also opt-in to Email Notifications.

If all that is correct and you still did not receive a code, then you’ll want to contact 2K Support and open up a ticket to get the issue rectified.

All in all, the NBA 2K23 League Pass codes have gone out with relatively few issues among the OS community, but I do think a couple of the problems they brought up are the ones the majority of people could still be dealing with right now.