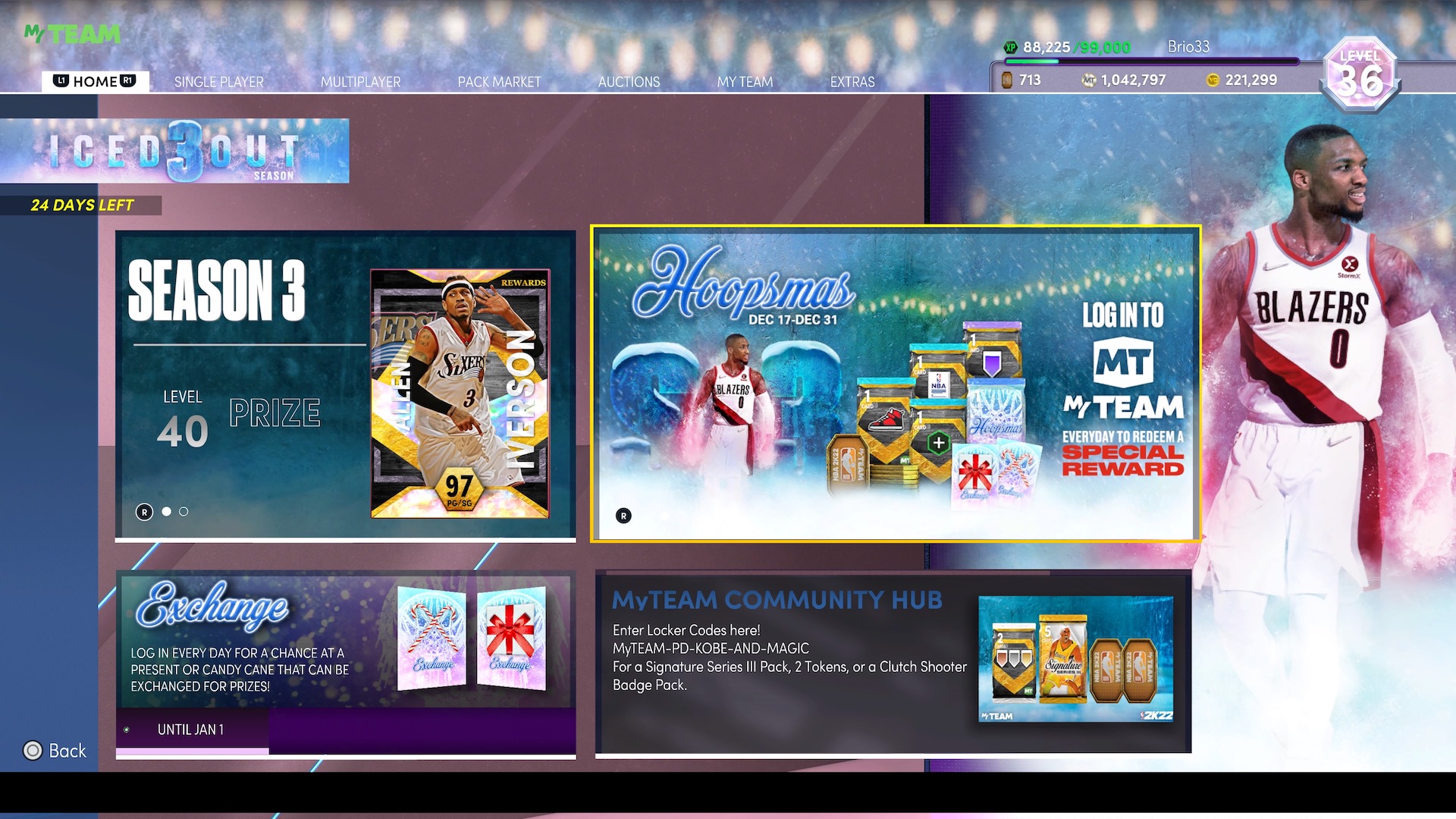 “Dropping the ball” is an event typically synonymous with excitement and hope when a new year arrives. Unfortunately, the usage of the phrase in my title is more about MyTeam’s seeming lack of the Glue Hands badge. Still, I am hopeful that maybe 2K can save the day with a Rodman-like dive at the last second of Season 3.

And it’s really not rocket science guys, just give us some legitimate content. I’m not the only one who thinks this because the community at large is unimpressed with MyTeam right now. This is not ideal because compared to previous years there is technically a ton of stuff to do in the game right now:

So while there is indeed a lot of modes listed there, it’s definitely a quantity vs. quality kind of thing. And right now the quality is lacking.

(Editor’s note: This was written over the holidays but we’re just publishing it today.)

Clutch Time = Worth The Wait?

First off, Clutch Time is a great new idea, so that deserves a round of applause. Plus, I have to thank 2K for having Damian Lillard be a quantifiable reward. I’m not at 50 wins yet, and while I’m excited about the mode going forward, I’ll probably go no further towards Dame this season. 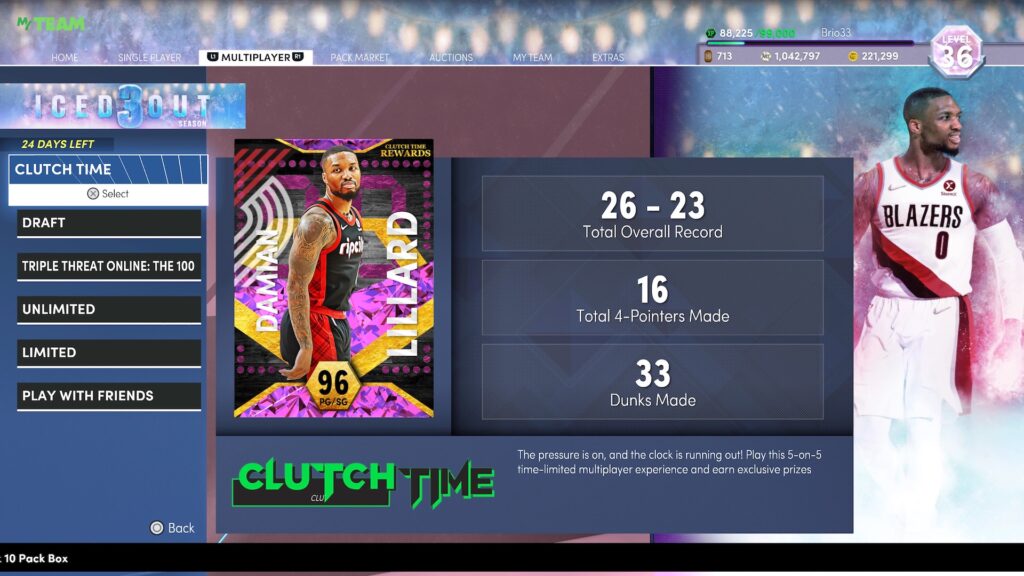 I’d like the card (his ruby was a beast), but as is the case with a lot of 2K player rewards, if you don’t sprint to get them within a day or two they quickly become irrelevant. When pink diamond Magic Johnson came out it went down to 70K-ish MT in a couple days), so Dame quickly reaches a point where he’s just not worth the grind.

Sometimes that grind can be fun and sometimes it can be rewarding along the way, but with Clutch Time I’m a fairly average player. In other words, I have been reset a couple of times towards the end of a 10-game run, which is super frustrating. I’d rather focus my limited time on playing, well, Limited on the weekends, or working on Domination to get tokens, HOF badges, and Manu Ginobili (he’s not objectively great, but I personally love him so I’ll do it).

My only piece of constructive criticism for the mode itself would be to increase the shot clock just a little bit. The 14 seconds is barely enough time to run even one play, so maybe something like 18 or even 20 seconds would be fine. I don’t want to ruin the fast pace, but with such a short clock, people just kind of do the same thing over and over (usually spamming pick and roll as it’s the easiest/fastest), and that gets boring really quick.

I think Clutch Time will ultimately have more longevity and hype than something like the Draft. But regardless of how good of an idea the mode is or how well it’s executed, the success will mostly depend on the rewards.

Beyond Lillard, essentially every other reward (particularly online) is unfortunately tied to RNG.

There’s Michael Redd (or whoever the player rotates to) on the Clutch Time wheel, the Draft Mode ascension thing, the annoying ball drop Triple Threat rewards that never even pop up, and of course the Limited rings. Playing a few TTO games only to see one token as my reward, or winning 10-plus games in Limited to not even catch a glimpse of a ring, truly hurts my soul. Plus, it just makes me want to close app and play something else.

Waaaaaaaay back in Season 1, they had a specific event where you could win a certain amount of games in Unlimited, Limited, Triple Threat, etc. to earn some pretty good cards. I might not be good enough or have the time to do the 12-0 grind (or whatever the loosened requirements are now), but I wanted amethyst James Harden and made it happen.

Five games is manageable. If I matched up with a talented player and would obviously get blown out, I could just quit and move on to the next game. I think it took me closer to 10 games, but at least the goal was concrete. There was no RNG and no being reset if I lost too many times. More of that, please.

(Just as a note, I’m not saying to take away the elite Unlimited grind. Awesome players deserve something like that, but it’s just not me and I want to enjoy the mode too.) 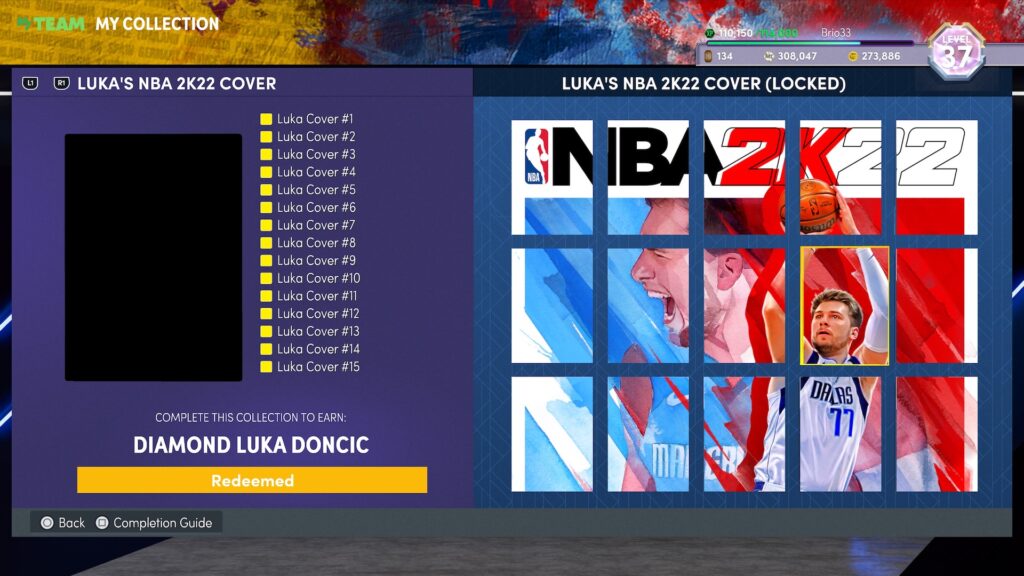 Beyond that, do you remember the events (also Season 1) to earn a diamond Luka Doncic or Darrell Griffith? The Luka grind was actually kind of difficult because you had to win games across all modes of MyTeam, but again, it was finite. More of that please.

An easy way to improve this Hoopmas nonsense in the future is to just put those silly presents and candy canes on Triple Threat boards, or daily agendas (win three Domination games to earn a candy cane, for example), or in the token market. Then let people play the game as much as they want to get more HOF badges or packs. Reward the grinders. A login pack can be an appetizer, sure, but where’s the main course (or decadent dessert)?

2K is trying to serve us a fancy-sounding appetizer and then call that a meal, but I’m still hungry. During the holidays when some of us working folks had a little extra time for once, this would have been the time to tweak the model.

To lead with something positive, I am happy that 2K dropped another Domination tier in Season 3. However, they should have waited until closer to Christmas to drop it with a better reward. 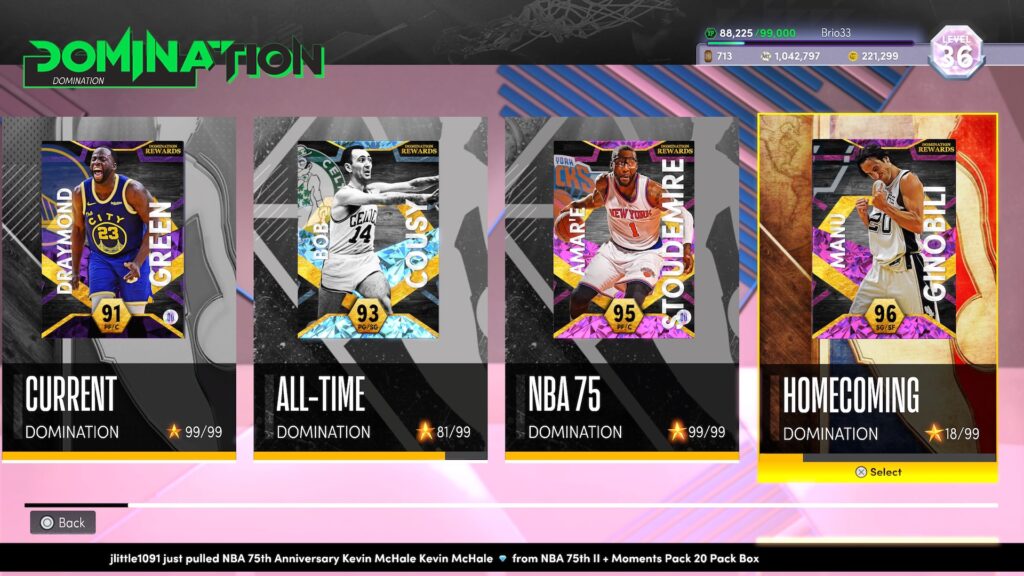 Even if they just upgraded Manu to Galaxy Opal, people would probably lose their minds. Plus, the other rewards along the way to 99 stars are arguably worse than the last tier of Domination too, which just isn’t great. It can’t really be that hard to reach out (via a Twitter poll or by asking content creators) to see what people want to play for, can it?

Also, what happened to Spotlight Sims?

Sure, they did the little Spotlight drop after Steph broke the 3-point record, but it seems like in 2K21 we constantly had epic Spotlight Sims to grind. I miss that. I also enjoyed how past Spotlight Sims had certain requirements, usually tied to using a certain amount of players from particular teams. This added a layer of strategy to the squad building, and it added some intrigue to the auction house as prices for certain players fluctuated.

I’m going to throw out an idea: give us a set of Spotlight Sims where we play each team three times to earn a diamond card from that team’s history. Let’s take the Rockets as my example. Game 1 would be against the ’90s Rockets led by Hakeem Olajuwon. Game 2 would be the 2008 squad with Yao and T-Mac. Game 3 would be the current (rebuilding) Rockets.

The trick would be that the squad we use has to match (or be lower) than the overall rating of the team we’re playing against. So for example, if we’re playing against Yao and Tracy McGrady, we can probably bring a pink diamond or a couple of diamonds to match them, but for the game against the 2022 Rockets we’ll be lucky to be able to afford a ruby. This will make for some creative squad building (especially if we have to use a certain amount of Rockets players) and that would be really fun.

Then, as 2K has already done in the past, beating all of the teams in a conference gives us a pink diamond from that conference, and then beating every team gives us an opal. It doesn’t have to be an opal LeBron or something crazy (though that would be great), but for playing all of those games it should still be something decent like a juiced opal Jim Jackson or Joe Smith.

MyTeam revolves around packs because it’s how 2K makes money. (By the way, what is up with the pack prices? Has the cost of living gone up that much in California?)

But I wonder if 2K won’t add more grindable content because the studio heads think it will affect the amount of money people spend on packs. I personally think that having more free cards would bring more people into the mode and get them invested, and then therefore they’d be more inclined to spend money to improve their team. After all, let’s be honest, the big spenders and pack addicts are going to be dropping cash on this game no matter what (which is a problem to discuss another day).

Also, if they give us free cards, it’s not like those are going to be cards that typically sell packs, like a T-Mac or MJ. Coincidentally, there are hundreds of other players throughout NBA history that get no MyTeam love, so it seems like there is a missed opportunity here.

This takes on an even weirder context right now with Omicron sweeping through the NBA. There have been so many great NBA games deserving of Moments cards (and Moments agendas to earn those cards). I’d love to see an agenda where if I hit a 3-pointer with any Lakers player with 15 seconds left of an overtime game, I can earn a diamond Austin Reaves. That card would never headline a pack drop, but people would be hyped to have something unique like that to accomplish. 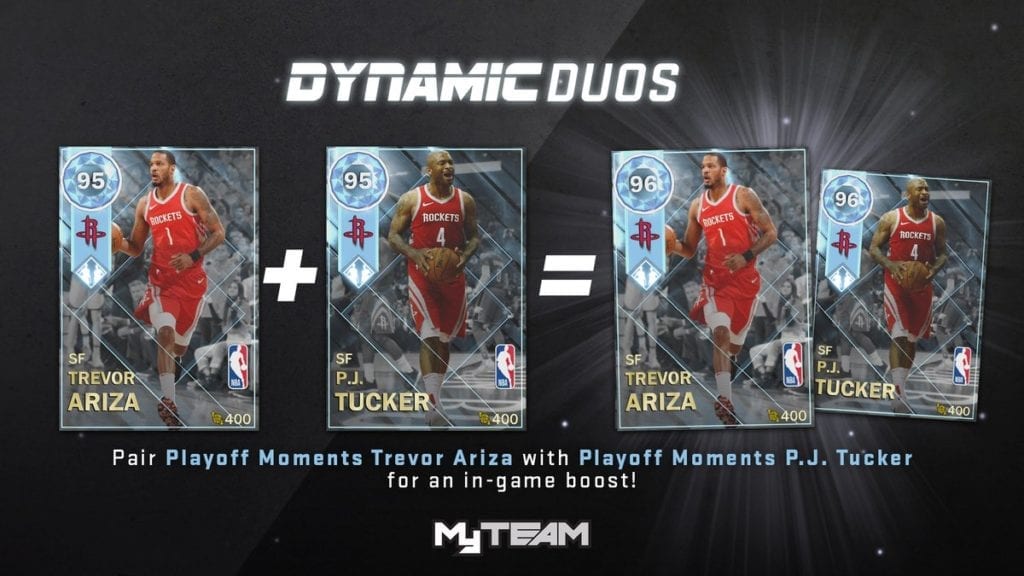 I’ve said this a zillion times before, but one of these days I’m hoping we get a decent P.J. Tucker — who I don’t think has had a card since his playoff moments card from 2K18. He’s an NBA champion now for crying out loud, put some respect on his name!

So, 2K, just give us some other players we can earn. Please. Or at the very least, give us more ways to earn a new pack here or there. The one challenge game with each content drop is nice and all, but for some people, after they play that one game they’re done. Put new packs on boards, or in Limited, or update the wheel spin in Clutch Time. I can say from experience that sometimes if I get a free pack from a challenge game or locker code, and that pack gives me a new ruby or something to whet my appetite, I’ll get the itch and go open a couple of packs in the market.

If making money is your only goal, it might help to give us a taste of the good stuff a little more often. Irritating and alienating part-time players can’t be a good strategy.

Season 1 made me think MyTeam would be pretty great this year, possibly even the best. Season 2 wasn’t terrible, but it wasn’t the leap I was expecting. And now Season 3 has me a bit shook.

But it’s not too late. 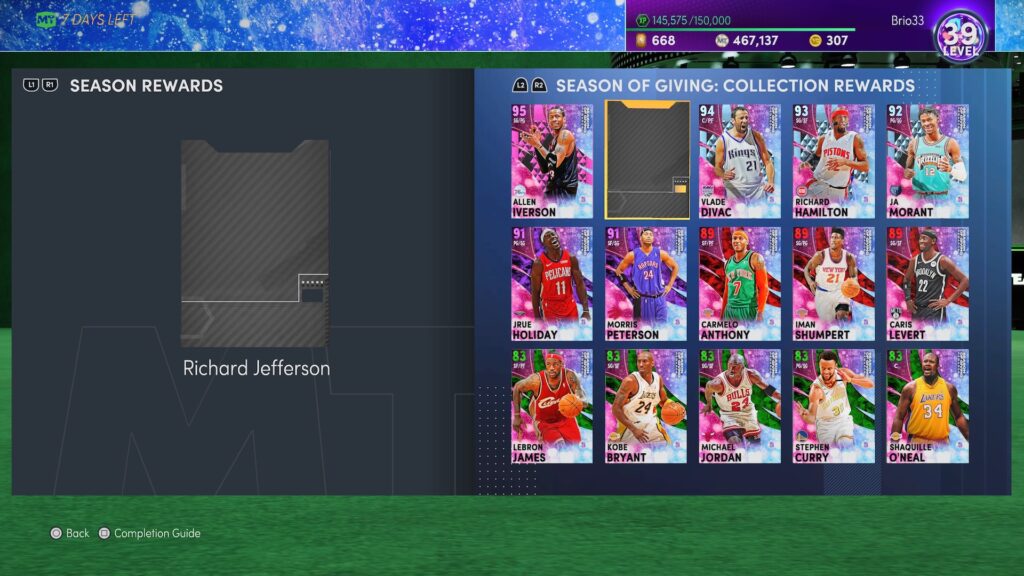 Just as a reminder, here is what we were doing last year around this time in MyTeam (and boy did we complain at the time, but obviously didn’t know how good we had it). 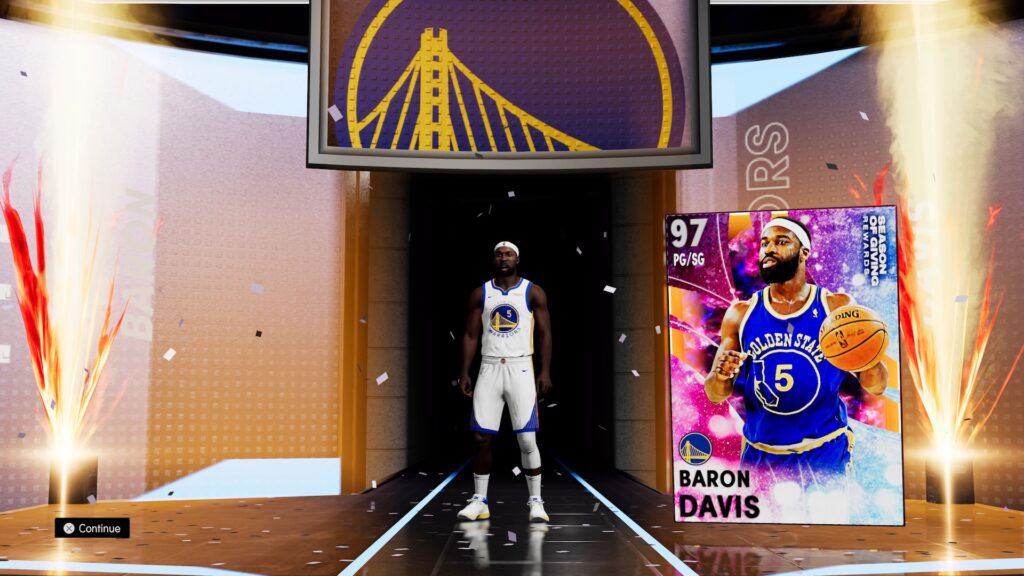 So 2K, going forward if you’re not sure how to reward us in this game, maybe just ask somebody.

The community loves communication and to feel involved. We’re going to complain no matter what, but why not figure out what people want in their stockings (and every MyTeam season going forward), then simply do that and soak up the praise.

You already know what player has my vote to get that next agenda card.